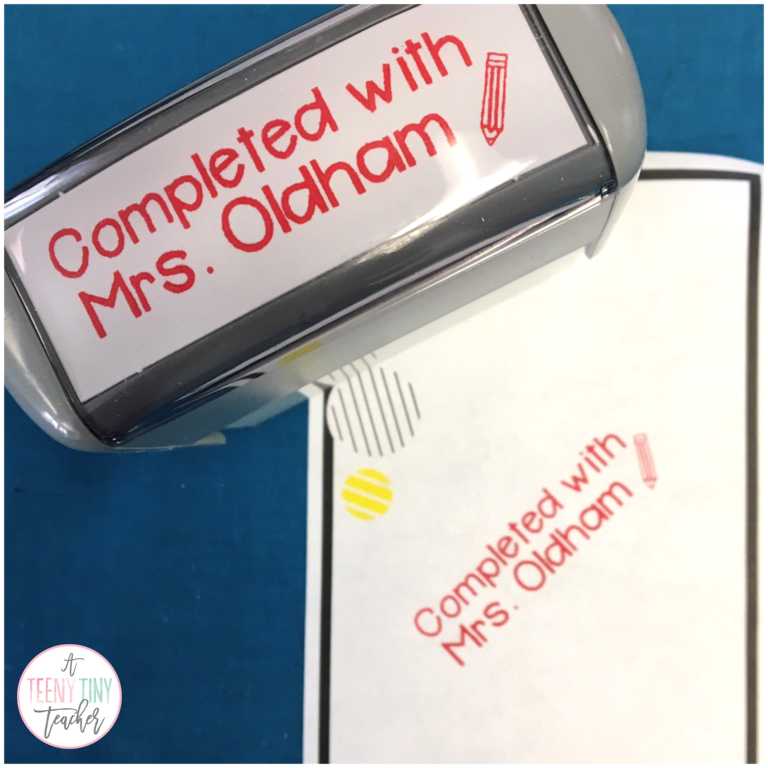 I did all three when my stamp arrived in the mail!!!!

I mean.  IS IT PERFECT OR WHAT?

You know those times when you’re with a small group, and that small group is struggling, and you’re smiling until you feel like your face is going to break BECAUSE THEY ARE JUST NOT GETTING IT, but you don’t want them to feel bad so you say IT’S OKAY, IT JUST TAKES PRACTICE (even though this is Day 482 of practice) and then before you know it, whatever you’re working on, whether it’s letters and sounds or rhyming or writing or phonics or math or reading or comprehension or WHATEVER IT IS, it is FINALLY finished but it looks like the small group knows how to do it AND THEY DO NOT?

Well, I always write ‘completed with teacher” or “completed with me” or “please practice more at home” or “” . . . you get the picture.

Well,  thanks to Molly at Lucky to Be in First, I NOW HAVE A STAMP!!

People, this was the EASIEST thing ever.  I sent Molly a Q/A in her store, then we started emailing (as in . . . two minutes later), I asked if she could design a custom stamp, and VOILA!  I got to the pick the words, the font, the color, the clip art of the pencil . . . and from start to finish, I had the stamp in my hands in less than a week!  I bought one for each of my teammates because I just felt so strongly that everyone needs this, as well as to relieve a little bit of the guilt I feel at completing way too many tasks with my kids, rather than letting them be more independent, but that’s neither here nor there.

I know I’ll be ordering more stamps in the future!!!  🙂 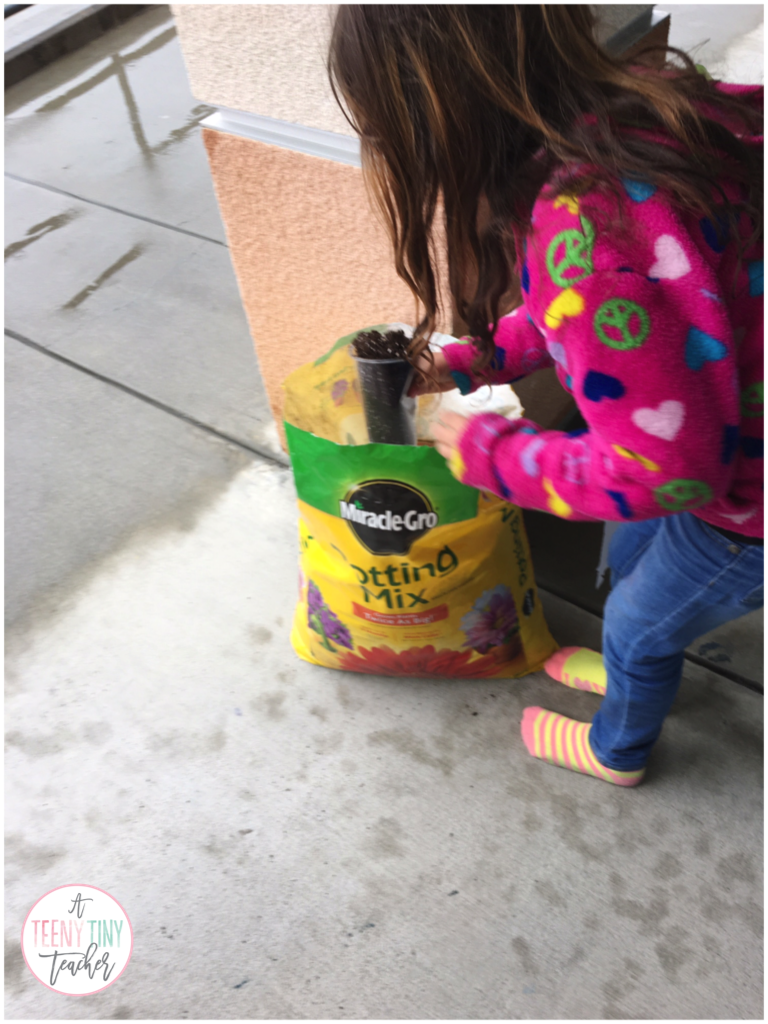 Even though it was technically still February, we started our plant unit on Monday, the 27th.  Because our plant unit is approximately two weeks long, and then I want to squeeze in some leprechaun stuff, and then I have a week until Spring Break (which translates into YEEHAW AND HOORAY) and we planned all of this on our planning day so I am trying to stick to the plan so that I can accomplish all that is left to accomplish before it’s June.

So we planted on Monday.  On schedule.

Except that it rained.

And we had computer lab AGAIN.

And we had computer lab in the lab that is on the other side of our ginormous campus and so we were DRENCHED.  Especially because no one really believed it was going to rain and I only had one kid bring an umbrella.

All of that is to say we had to take our shoes off when we finally returned to class because WE WERE SOAKED.  And then we planted outside in our sock feet while it was raining.

If you’d like to know how I can get 30-32 kids to plant in under 30 minutes and have all of our plants grow to OUTRAGEOUS HEIGHTS, well then, you need to read THIS POST.  I just re-read it for fun and I made myself laugh so it’s entertaining as well as educational, if I do say so myself.

If you’re going to plant this spring, I highly recommend reading THIS POST because I swear, we get plants that grow and they grow good. 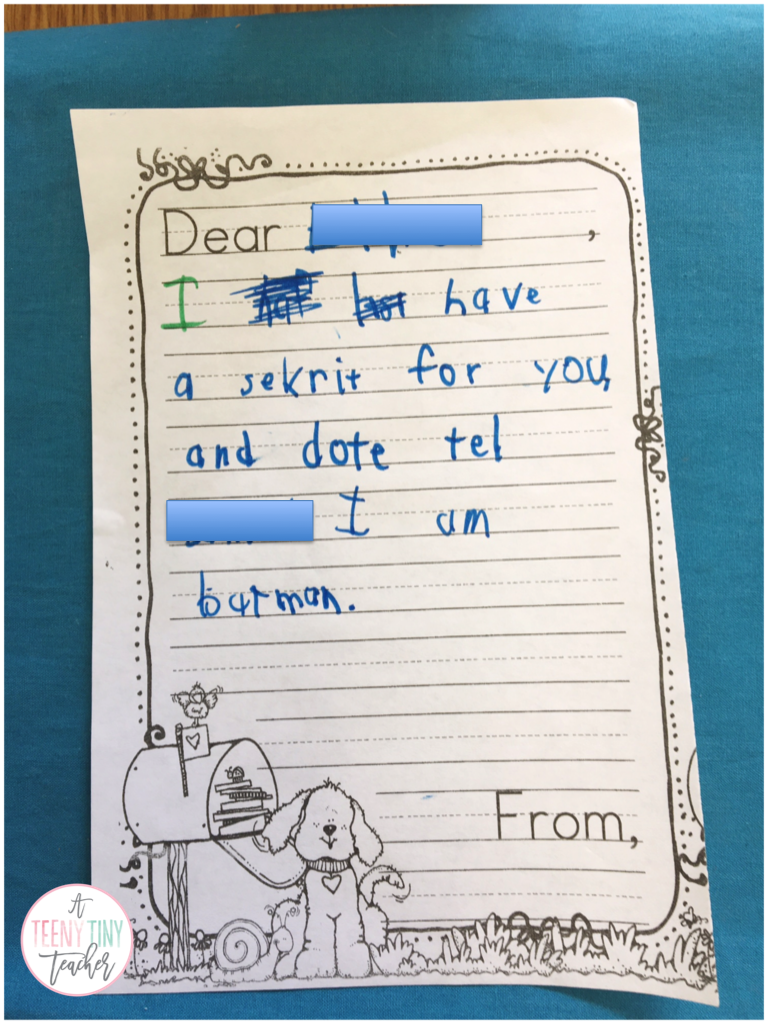 I found this gem of a letter in our class mailbox.

If you can’t read first grade writing, it says (I changed the student names):

I have a secret for you, and don’t tell Murphie.  I am Batman.

And then he didn’t sign his name because he’s Batman, obviously.

I ALWAYS read through all of the letters in the class mailbox because you never know if you’re going to find something inappropriate, such as I love you or will you be my girlfriend or I hate first grade.  On this particular day, I had read through about fourteen million Will you play with me at recess and Do you want to have a play date letters to last THE REST OF MY LIFE so when I came across the fact that Batman is in my class, I was thrilled.

I had absolutely no idea so this was news to me!

I’m telling all of you, but I am keeping it a secret from my class. 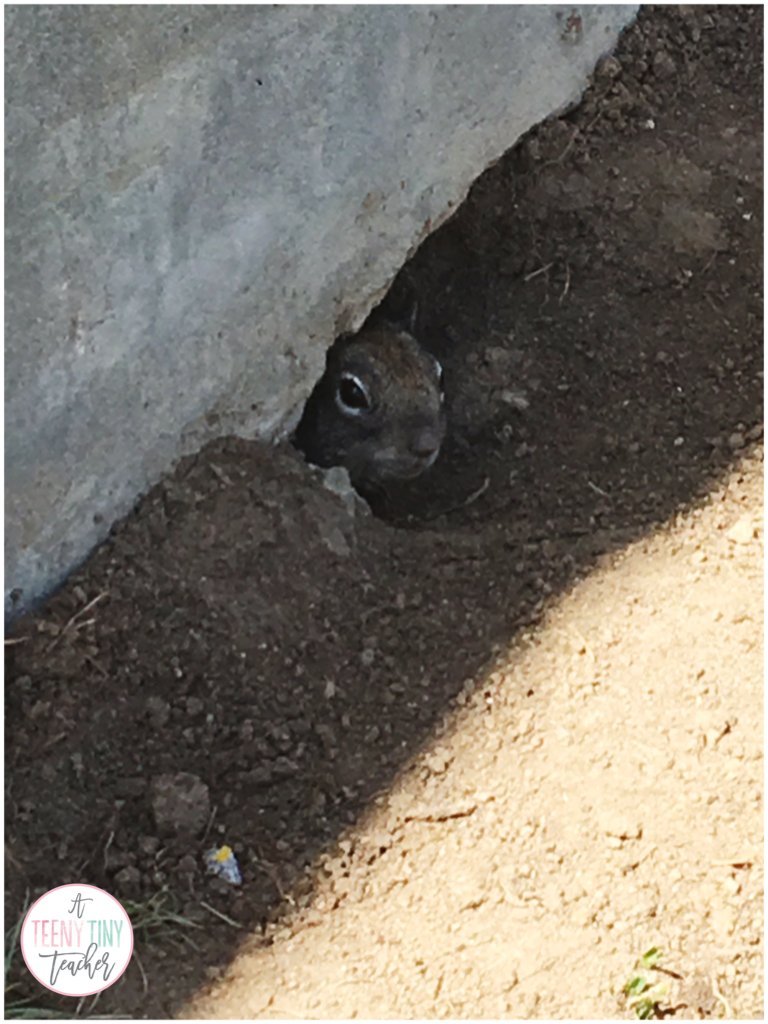 We have a class pet.

He showed up this week and he is living under my classroom.  Since we are an outside school, we see him every time we head out to recess or the bathroom or to lunch or the computer lab or anywhere, really.  We see him when we return, as well.  And because I have big, beautiful windows, we see him out the windows, too.

He has taken up a lot of our time.

Several of us teachers are very intrigued by him and we couldn’t figure out if he was a squirrel or a chipmunk or a gopher or a groundhog or what . . . but two of kept saying groundhog when what we really meant was gopher (in much the same way I say I had a healthy kale salad for dinner with lemon water when what I really meant to say was I had an In and Out cheeseburger with fries and a milkshake) and we were so tired by the time it was Friday that we actually looked at all the stuff in my files about groundhogs trying to compare the pictures.

And then when she got home, she texted me with pictures of gophers and then it all came to light.

He’s a little gopher and he’s the cutest thing ever even though he is wreaking havoc in the brand new sod that the district gardeners just put down last week.  He has tunnels and holes EVERYWHERE.

Oh, and the funniest part is that he was leaving me a little present at the top of my stairs each morning (READ:  poop) and we all kept thinking it was from a bunny.

But it’s the gopher.

And he doesn’t want to go (READ:  poop) where he lives so he’s dirtying up my area instead.

But I still think he’s cute.

None of us want to tell our custodians or administrators because we fear his days would be numbered.

I thought I had a picture for this next one AND A VIDEO, but now I can’t find it in my Facebook feed AND I’VE WASTED AT LEAST THIRTY MINUTES SEARCHING FOR IT.

That’s thirty minutes that I’ll never get back, people.

I could have been eating a kale salad or lifting weights or something in that thirty minute time period.

Now I’ll have no time to do either, goshdarnit.

Oh well.  Anyways, it was Read Across America week at our school, along with every other school, and I wore crazy socks, and a ball cap, and red/white/black (Cat in the Hat colors) and green and I read all the Dr. Seuss books I could find, and we made a Cat in the Hat craft which was really cute.

Twice this week, during my lunch, I read to a fourth grade class and a third grade class (they do not have my lunch so they were still in class) and it was SO MUCH FUN.  I love reading picture books to kids and all I need is an audience.  Besides the kids, it’s probably my most favorite part about teaching.  I love to make funny voices and scream and yell and do all that fun stuff.

On Friday, our Read Across American coordinator (READ:  a teacher who volunteered) found a reader to read to us at an assembly.

He is famous in my district.

And HE WAS AMAZING.

His voices, his gestures, his laugh, his expression . . . the kids were obsessed.  So were the teachers.  If any teachers brought work along to grade (I didn’t because I knew his reputation), they quickly put it aside because they just wanted to watch and listen.

When you have a multi purpose room filled to capacity and a man in front with a picture book and no one can really see the pictures because it’s a small book and we’re in a large room AND EVERYONE IS LAUGHING AND CLAPPING AND READING ALONG . . . you have MAGIC.

I want his job.

I don’t really know what his job is, but I want it.

I also was totally humbled because whereas I thought I was a really good reader, I found out I have a TON OF WORK TO DO.

So now I’m off to practice.