I am *finally* on Winter Break!!!  It definitely felt like a marathon having to teach four weeks between Thanksgiving and Christmas break this year.  Not that I know what a marathon is like, having never run in one before, or ridden a bike in one before, or basically run or biked anywhere for any amount of distance, but I know a marathon is LONG and that’s what I’m referencing.

Normally, it’s three weeks between Thanksgiving and Christmas break and, although it’s not a piece of cake, per se, it’s definitely manageable.

This past week was fun and hard and exciting and hard and cheery and hard.  Did I say hard?  Because while it was fun, exciting, and cheery, it was also hard.  Three kids lied to me, two were written up while playing on the playground, and the bickering and tattling were out of control.  My little classroom community that I worked so hard to achieve went a little too “community” and slid right into we are family, we are brothers and sisters, we fight, we make up, we fight, we make up . . .

I felt more like Jekyll and Hyde than ever.

Let’s sing Jingle Bells!  Jingle Bells, Jingle Bells, Jing—stop touching her—Bells, Jingle Be—put your shirt down—Dashing thro—poop is not a bad word, it’s just not a nice word, but everyone does it—Dashing through the sn—yes, even me, yes, I poop, I KNOW, shocking, but you can’t eat as much cheese as me and not poop—in a one horse open sle—everyone turn your volume down, it’s really loud in here—Jingle Be—no, no one is kissing anyone, we are all friends in first grade, there is no kissing–Jing—no, we already had our party, do you not remember we played games and decorated cookies and you almost threw up?—Dashing through—I CANNOT SING THIS SONG ONE MORE TIME, NO.

And that was pretty much just the first five minutes on Tuesday.

I made it through polar express day, two pj days, a party day, Kindness Elf all week, crafting, presents for parents, etc etc etc.  We didn’t get through very much curriculum AND THAT IS OKAY, I AM FINE WITH IT.

Now I get THREE WEEKS OFF.  We always get a three week break, don’t ask me why, but we do, and I am ALL FOR IT.  This year, since they pushed break until the 22nd, we do not go back until TUESDAY, JANUARY 16th since Martin Luther King, Jr Day is on the 15th.  We’ll be learning all about him when we go back.

My team and I went back and forth this year on what to have our kids give our parents.  I mean . . . we discussed it AT LENGTH.  We were on Pinterest like no tomorrow, and sending each other screenshots, and taking out all of our crafts and blah blah blah . . . none of us were super happy with what we decided.

I’ve made these every year (transparent pictures inside an ornament) for the past seven or eight years.  But our kinder teachers also make them so I hated that the parents were getting the same gift two years in a row.  I also hated that I made them.  The kids seriously did nothing with them.

We decided to make a thumbprint reindeer ornament or maybe it was a gingerbread one, I can’t really remember, I just know that we bought all of the supplies.  We had everything we needed.

And then I saw Little Kinder Bear’s post on Instagram and I just KNEW we had to do it, forget all of the supplies we’d already bought.  FORGET IT, I said.

I went to Michael’s and bought out their holiday print ribbon.  Then I made a small tag and printed it on white cardstock paper so my kids could color it and sign their name.  I passed out the plastic ornament balls, tags, silver sharpie markers for writing our names on the balls (we all shared the only two I had), twist tie ready-to-go ribbons, and then called my kids to my table one at a time.  They chose the ribbon they wanted (I had about 14 different varieties) and then I measured them by having them hold one end of the ribbon to the top of their forehead while I cut the other end down at their feet.

They did everything.  They cut the tag, they helped each other get the tag through the pre-made ribbon and onto the neck of the ornament, they stuffed the ribbon into the ornament, etc.  THEY DID IT ALL.  Really and truly, all I did was measure. 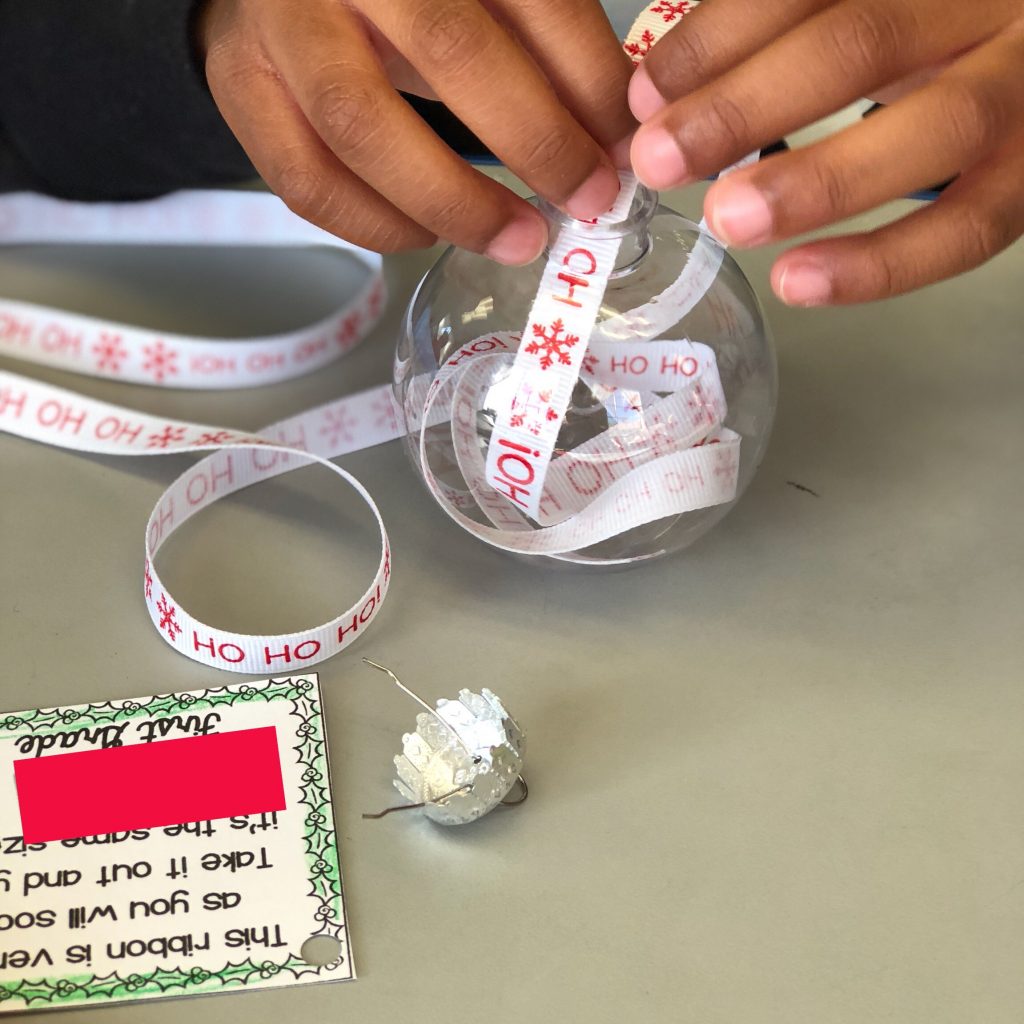 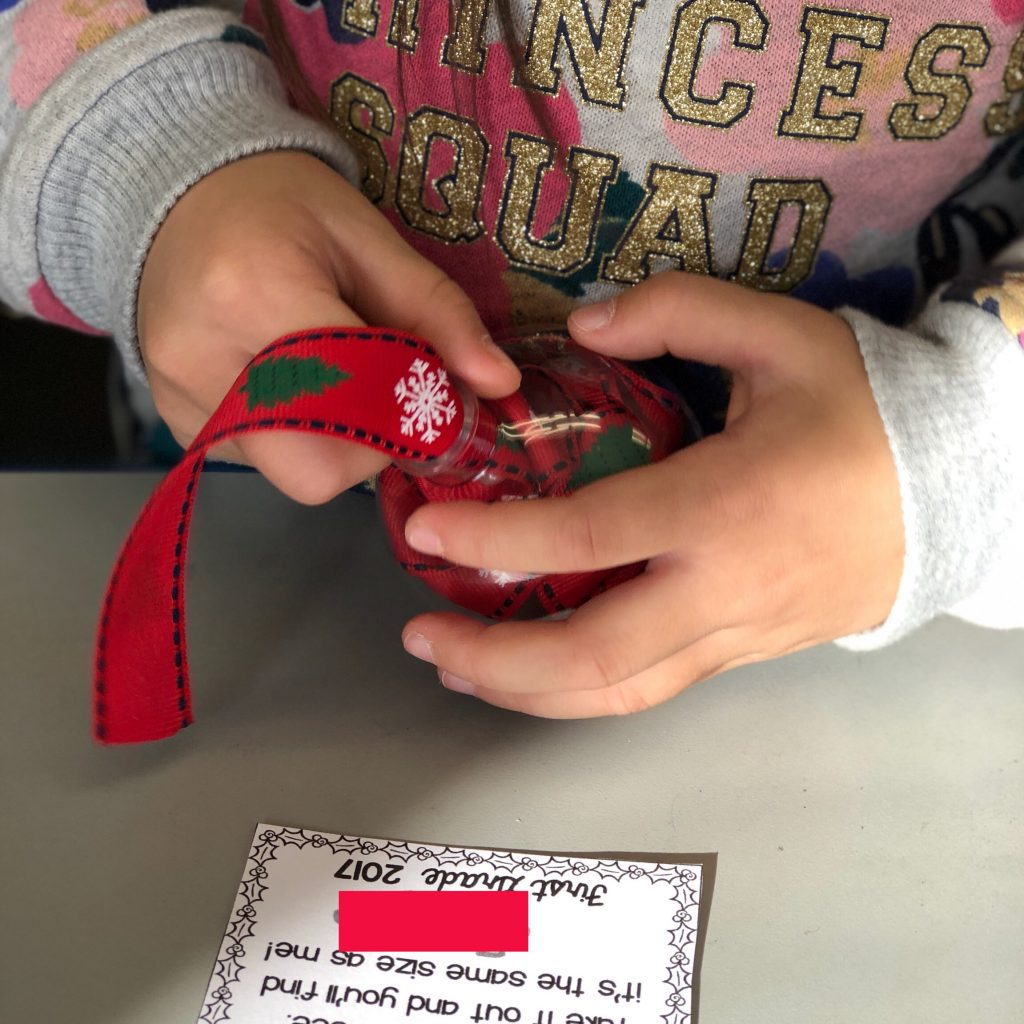 I forgot to take a picture of one already made, but I am here to tell you that they were so so so cute!!!

One of my boys got his finger stuck in the neck hole of the ornament, and his face was turning red as he was smiling super big, so I kind of thought he was joking, but he wasn’t.  It was STUCK.  He wasn’t panicking, though, so I told him to just keep smiling and breathing, and that I wouldn’t freak out, either.  I literally said that.  I said Let’s not freak out, okay?  And he laughed a little and said Okay, Mrs. Oldham, that’s fine, I won’t freak out if you don’t.  By the way, this kid is ADORABLE and I wish I could clone him, and if you could see his dimples, you would love him, too.

I told him to come around the table and stand next to me, and then I tugged on his finger and, sure enough, it was stuck.  I was kind of hoping he was joking with me, but he wasn’t, plus he’s not the type of kid who would think to play a joke on his teacher, but deep down, I was secretly praying he had a lapse in judgment and was doing it anyway.

I told him to breathe, and I breathed, and then I kind of pushed his finger in and then pulled really quickly, and it came right out.

Then we laughed and I made an announcement about how using a pencil to stick the ribbon inside the ornament might be a good idea.

I LOVE THESE ORNAMENTS.  I’m telling you, I AM IN LOVE WITH THESE ORNAMENTS.  Is it just me, or do you think years from now, when these kids are decorating their tree, they’ll ask to take the ribbon out, and they’ll stand next to it and talk about how small they were in first grade?  And then maybe they’ll talk about me and how funny it was when so-and-so got his finger stuck in the ornament? 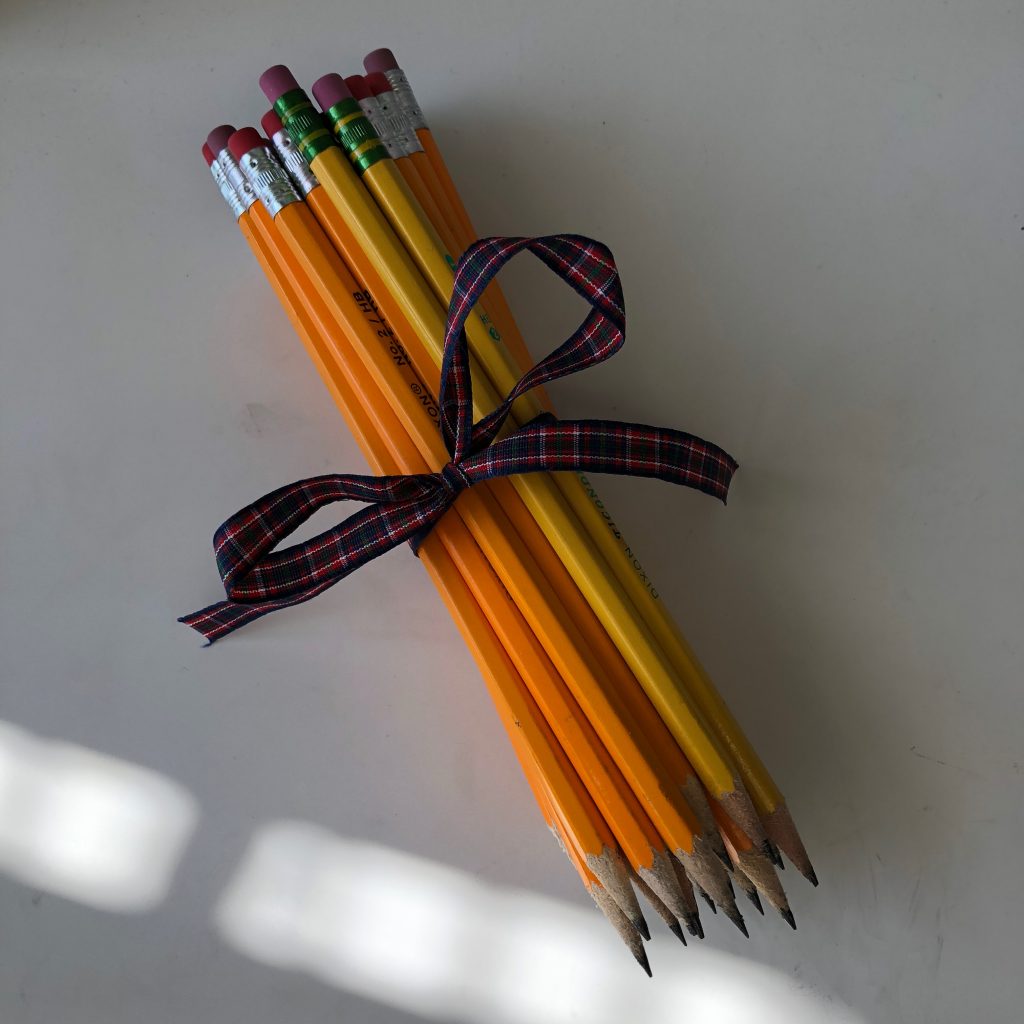 One day this week, our Kindness Elf told us to deliver pre-sharpened pencils to another teacher.  My kids thought this was such a great idea, and they talked me into letting them sharpen the pencils.

That’s kind of the week I had in general.  My kids talked me into all kinds of things, and I was too tired to think of reasons why we shouldn’t do something, so there you go.

Each student sharpened one pencil in the automatic pencil sharpener which I never let them use.  NOT because I don’t think they can handle it, but because I CANNOT TAKE THE NOISE OF AN AUTOMATIC PENCIL SHARPENER.  My upper grade kids usually do it for me during last recess or I’ll do it, but it can’t be when kids are in the room OR I WILL LOSE MY MIND.  It’s a thing.  I feel the same way about whistling.  STOP WHISTLING.

Even you, Mr. Whoever You Are in the next aisle at the grocery store, STOP WHISTLING.

I do have the quiet pencil sharpener, and my helpers use it, but my first grade kids can’t seem to get the hang of it.

I used left over ornament ribbon to tie these all together, and then a couple of my kids delivered these to one of our new teachers.  (Not new-new, just new to our school).

My kids just LOVED this. 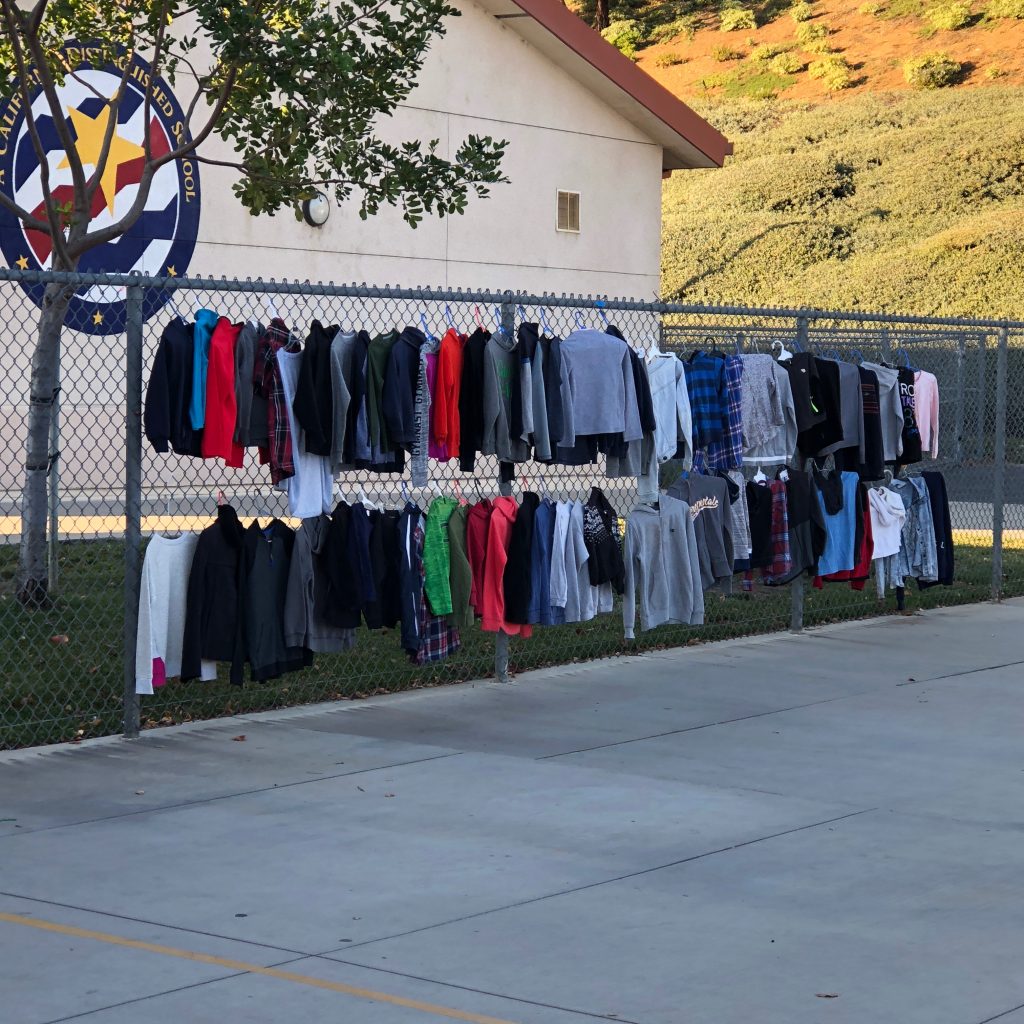 This is our Lost and Found on display.

Otherwise known as the Kids Section at Old Navy.

One of the PTA moms puts it out on display like this so parents will see it when they’re dropping off or picking up their kids.

This was all pretty much collected THIS WEEK because the temps dropped down into the 70s this week and one day, it stayed in the 60s.  My kids wore scarves and boots and beanies – it was like WINTER.

I know everyone everywhere else is cracking up, but this is So Cal and we were all excited and ready for this.  At least I was.  🙂

A couple of my kids came to school totally unprepared for the colder weather (shorts and tank tops) and they were freezing and shivering so I told them to go “borrow” something from the Lost and Found.  🙂

Any coats and jackets not picked up by the end of the day yesterday were being donated so that’s a good thing!! 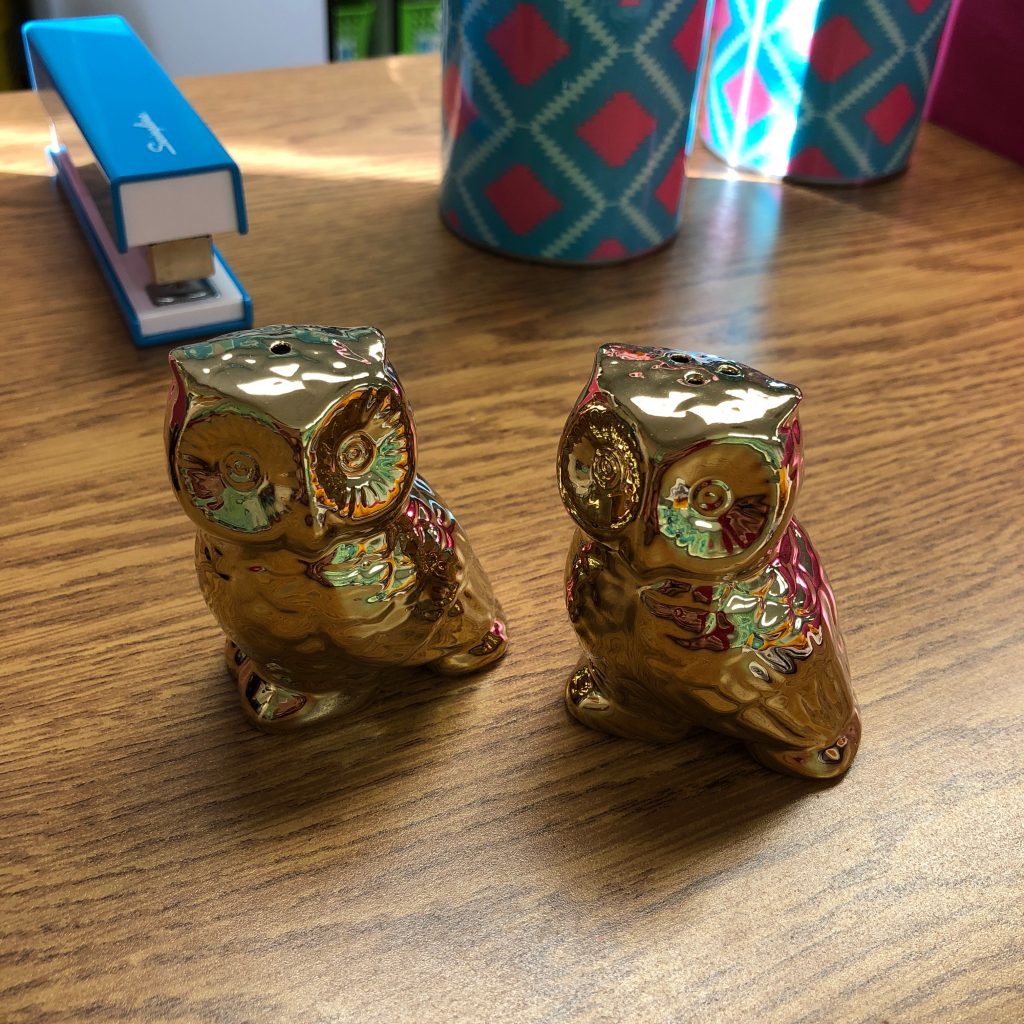 Salt and pepper shakers, I know.  But I don’t get it.

Here’s the deal.  We got a ream of paper, expo markers, sticky notes, and chocolate from our admin.  I WAS THRILLED.  I needed all of it, especially the chocolate, and I was SUPER THANKFUL.  We all were.  PAPER?! we exclaimed.  EXPO MARKERS? BEST DAY EVER!

And I’m not being sarcastic.  I am being genuine.  We were so so so happy.

There was also a little gift wrapped up in what appeared to be Bed Bath and Beyond paper, but it was all tied up with Bath and Body ribbon.

Of the owl variety.

Someone said maybe they were supposed to be eagles because our mascot is the eagle, but THESE ARE CLEARLY OWLS.

Someone else said maybe our admin thought we needed salt and pepper shakers in our rooms since most of us work through our lunch and don’t sit in the lounge anymore, now that we have 30-32 kids.

Someone else said these were all left over from the Holiday Shop where the kids shop for their parents and it’s mostly just junk.

Except that we are terrible because we all think it is the funniest thing and NONE OF US GET IT.

These were given to us on Wednesday and since then, little gold owls are starting to appear here and there and everywhere in our staff lounge.  On top of the fridge, on top of the microwave, over on this counter . . .

I just hope our admin won’t be upset and that they’ll find the humor in it, too.

Because I still don’t get it.