Is it really true that I have to set the alarm for tomorrow and wear real clothes?
Really?
Agreed.  Let’s not talk about it.
Instead, let’s talk about what I worked on this week.
I worked on Parent Gifts.  The gifts that my kids give to their parents.  And, yes, that means I make the gifts for the parents.
I know.
I know, I know, I know.  However, this time, it’s actually not because I am a control freak.  It’s because I want the parents to receive a nice gift in addition to the Oriental Trading crafts and TpT Art Projects that we will make.
And, yes, that’s what I tell myself, and, yes, I do sleep well at night, thanks for asking.  😉 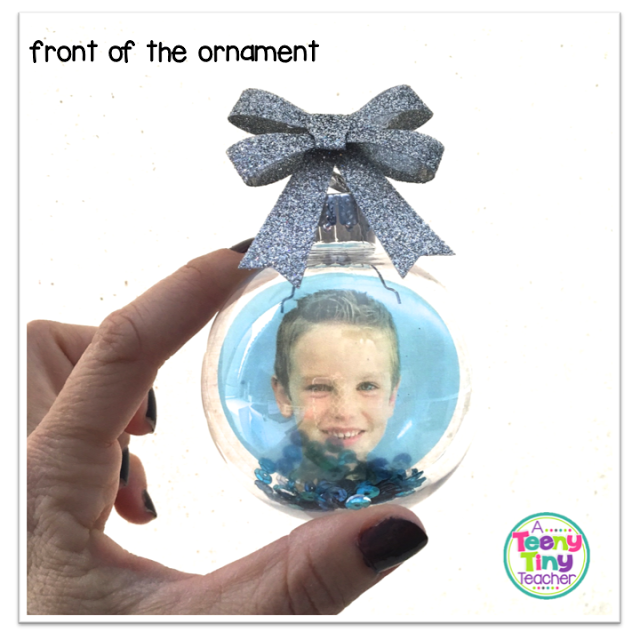 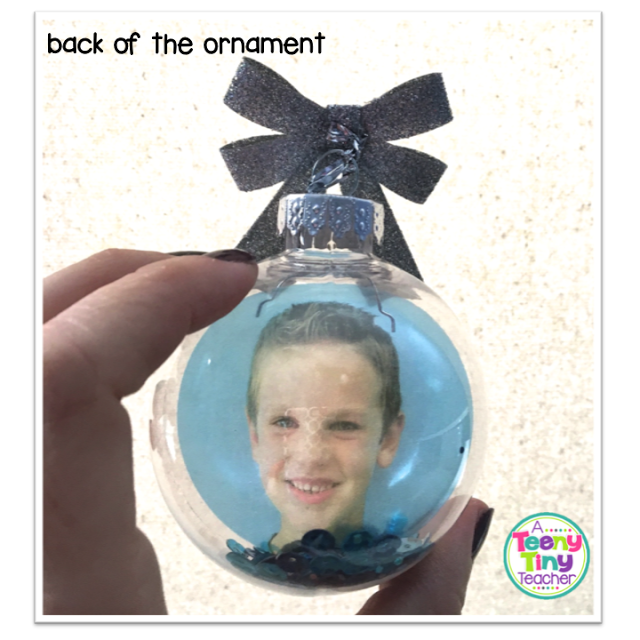 Get the ornament template {HERE}.
This little guy is Rohen.  His mom gave me permission to use his picture and I mean, why wouldn’t she?  How cute is his head inside this ornament ball?
You can read more about these ornaments and kind of get a tutorial {HERE}.
This year, I took some short cuts.
So I’m calling this:
PARENT GIFTS 2015.
THE NEW AND UPDATED VERSION.
Here are the short cuts:
First, Michael’s sells PLASTIC ornament balls now.  And that is very very very very very smart and so much less stressful, I can’t even tell you.  But, just so you know, the plastic ornaments don’t come in a box.  You have to buy them in singles and fill up your basket and then the poor cashier guy has to count inside his head while he uses the scanner gun to count to thirty.  Also, just a warning, do not try to talk to him while he is counting inside his head, or he gets mixed up.  #truestory
The second short cut I took was buying pre-made twist-tie bows that come on a cardboard sheet.
I bought the silver bows (seen in the pictures above) at Michael’s and there were only six bows on a sheet which meant that I had to buy five whole sheets.  They were 40% off so I got them for super cheap, but I am here to tell you that if they cost $10 a piece, I would still buy them because it beats tying my own bows like nobody’s business!  It made the whole process go by super fast!  I was LIKE A MACHINE.

Last, instead of putting glitter into the ornaments, my partner told me she bought sequins, and since I’m such a follower, I did, too.
Sequins are way more manageable than glitter.
And, with sequins, you’re not in any danger of having glitter in your eyebrows or on your cheek or stuck to your lip when you go out later for food and you already look a little silly because you’re wearing pajama pants as regular pants and hoping no one notices.  The last thing you need is glitter stuck to your face when you’re trying to pull that outfit off.
I like the sequins better, too, because they don’t stick to the picture inside the ornament ball the way that glitter sometimes does.
And there you have it.
PARENT GIFTS 2015
THE NEW AND UPDATED VERSION.
As for now, I’m going to stay in my pjs all day.  I’m even watching church online in an attempt to be as lazy as possible before heading back to school tomorrow.
But let’s not talk about that.
😉
« Five for Fraturday
Hot Chocolate Tips and Tricks »