Happy Saturday!!  I’ve got one more week until Spring Break!  I have to get through Open House in order to get there, and I’m sort of behind on every single thing, but once Friday hits, we will be on a much needed break!  🙂 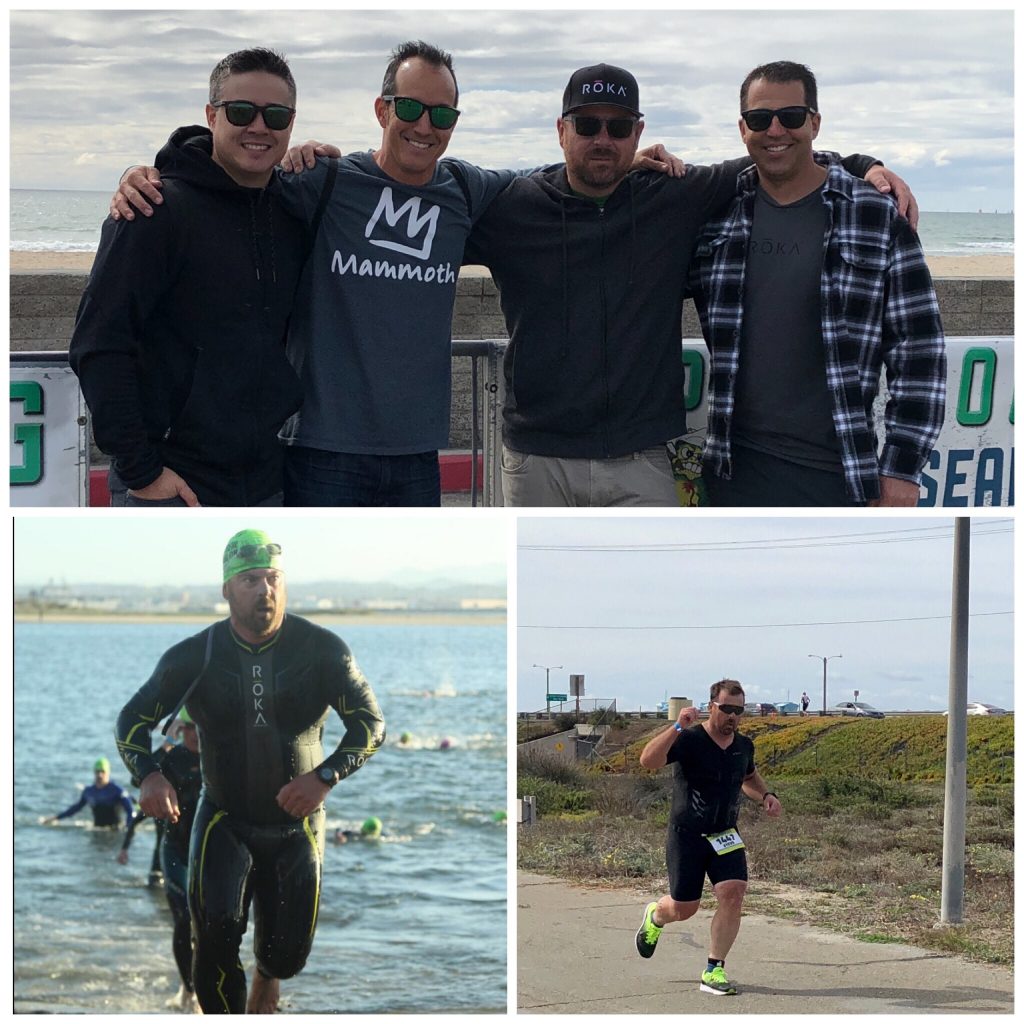 Last weekend was all about Steve!  🙂  He completed his first Olympic triathlon and has already signed up for his next one!  We had such a great weekend in Coronado.  We stayed at the Loews Hotel which was within walking distance of where the race was happening.  We spent most of Saturday walking back and forth from the hotel to the event for registration, orientation, meeting up with his buddies, etc.  We had a yummy lunch just the two of us, and then dinner with all the guys and their families.

On Sunday, I waited at the finish line with all kinds of people, and cheered for all sorts of people!  I loved how they announced each competitor’s name and city as they crossed the finish line.  I had no idea that was a thing.

Right around the three hour mark, the first of Steve’s friends came through, followed by the next two in five minute (or so) increments.  Each one told me they saw Steve on the run and that he was close behind.

And then we waited.

Five minutes, ten minutes . . . I turned to his friends and said so when you saw Steve, was he alive and well, or in a ditch somewhere on the side of the road?

Steve trained really really really hard for the swim and the bike portion of the race.  He had it dialed in!  He was super happy with his time in the water and on the bike.  But he HATES running and didn’t really train for the six mile run so . . . one by one, his friends passed him up.

He finished the race in three hours and 18 minutes!  🙂  I was so proud of him because I just cannot imagine!!!  Plus, he has lost over 40 pounds!

One funny thing that happened is that all the guys said they were going to shave because it’s supposed to make you faster in the water.  But Steve really didn’t want to shave off his beard and I didn’t want him to, either.  I really like him with scruff.  What can I say?

Well . . . Steve trimmed his facial hair, but shaved the rest of his entire body.  Let me tell you – his legs looked weird.  HAHA!

His friends did the opposite!  They shaved their facial hair and nothing else!!!

I *used* to have a video here of me (ME!) singing a song about vowel teams with my class.  But the video was BLOWING UP MY WEBSITE and wreaking a little bit of havoc.  Who knew?  Not me.  Nope.

So . . . if you’d like to see the video and hear the song, please visit my Facebook Page.  Once you’re on my Facebook Page, type the following into the “search bar” at the top.  It will pop up right below that and you’ll be all set!  Thanks for understanding my need to remove it from the blog. 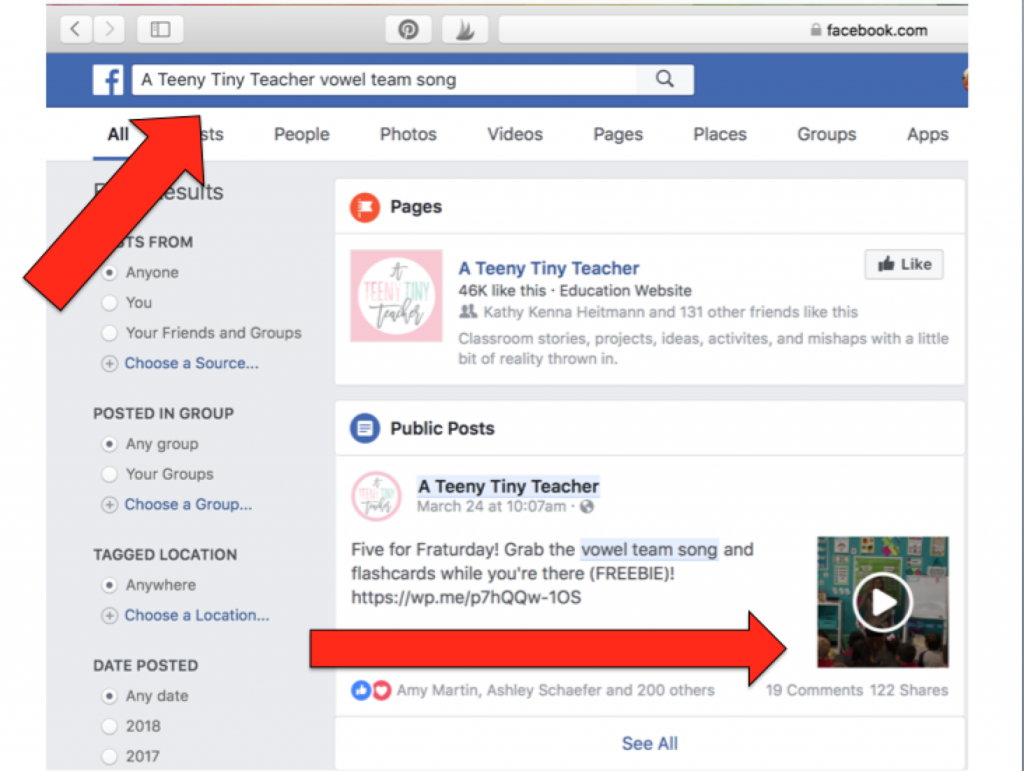 My kids are OBSESSED with this song.  Every year!!  They beg to sing it over and over.  I mix up the vowel team flashcards each time we sing it for an extra challenge.  I love that they are really looking at the vowel team, saying the first letter, etc.  During guided reading or any other part of our day, I can just sing or hum the first line of the song I see two vowels and BAM!  They’ve got the word.  LOVE IT!

I did not make this up and this is not my idea!  Years and years ago, one of my first grade teammates was displaced to another school, and she found it there.  She shared it with us and now I’m sharing it with you! 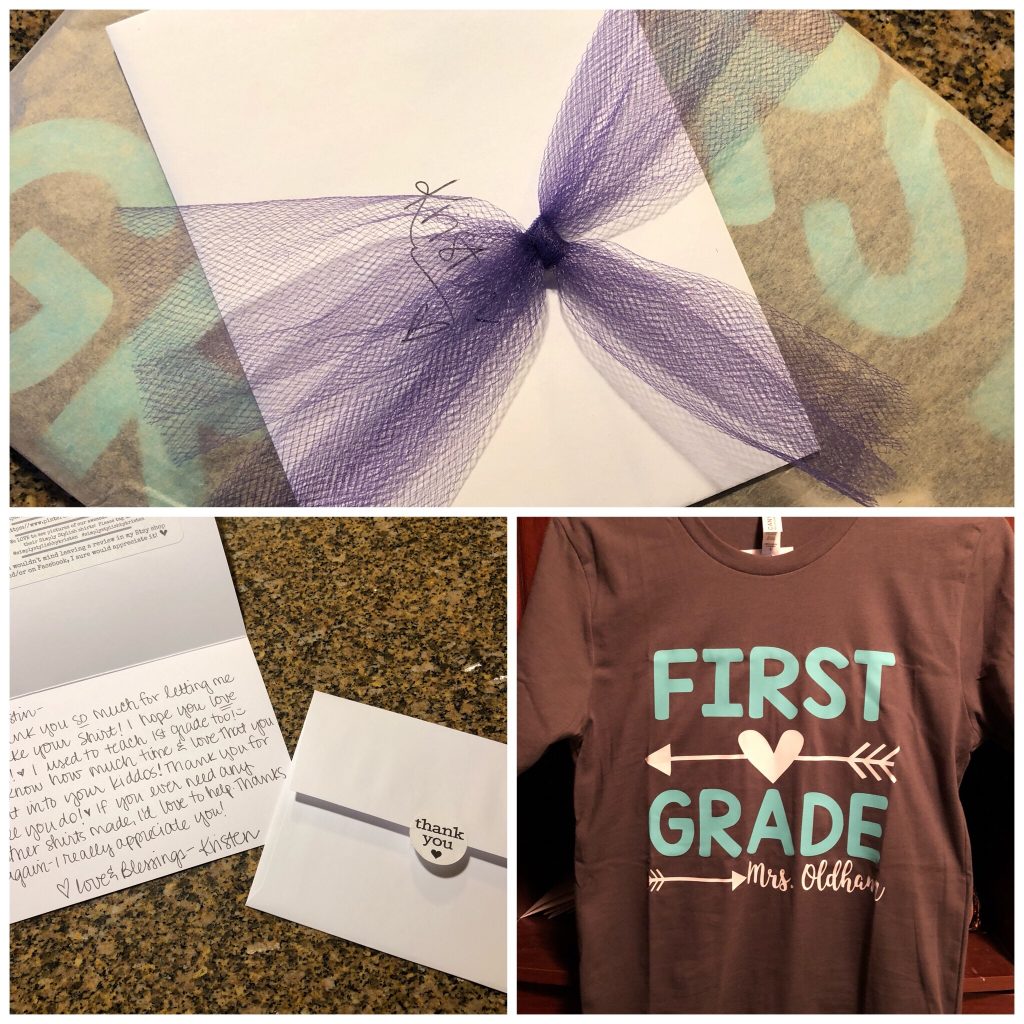 My teammates and I wanted a new T-shirt to wear at our Open House this week so we were on the hunt.  We found SEVERAL and wanted almost all of them.  But a couple of us are Font Snobs and so we had to turn a few options down.  🙂

Then one of my teammates found this one on Etsy and LOOK AT THE PACKAGING DETAILS!  I MEAN!

It was like my birthday or something!  The attention to detail was seriously special.  I couldn’t get over it.  When was the last time anything from Amazon came with a HANDWRITTEN THANK YOU CARD?

I highly recommend Simply Stylish just for that.  I am now a HUGE fan!  And, of course, look at the fonts on my shirt.

FONT SNOB APPROVED!  She has tons of options, too! 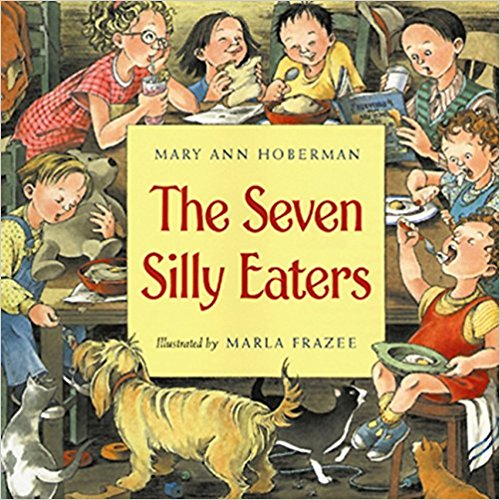 Have you read this book before?  I love it!  The whole book rhymes and there is a super fun surprise at the end.  The gist of it is that this mom ends up with seven kids who are all picky eaters.  She starts out lovingly making each one exactly what they want (fresh squeezed pink lemonade, homemade bread, etc) but by the time she has the twins (number six and seven), she is EXHAUSTED.

Well, two of my kids cracked me up yesterday during the reading of this!!

One said why isn’t the dad helping?  HA!  I had to point out that he’s in the background of a lot of the pictures holding grocery bags, reading with the kids, etc.

And another one said, while shrugging his shoulders, well, that’s what you get for having seven kids!

So then we had a talk about how I grew up (four kids) and my mom made ONE MEAL, and if you didn’t like it, you could make yourself a sandwich AND THAT WAS ALL.  I had several kids tell me that their families also only make one meal and if you don’t want to eat it, then you don’t eat!

But I also had kids say that their families make them whatever they want.

The little guy who said that about having seven kids followed up with I think maybe I will have two kids and that’s all.

I don’t really have a fifth thing.

I have some projects I need to put together for Open House today (binding some scrapbooks) and I suppose I should hop on the treadmill and go for a walk . . . but that’s about it for the day.

I really hope it will end up being a LONG LAZY DAY.

I hope you have a great day whatever you do!