Hooray for a week off! 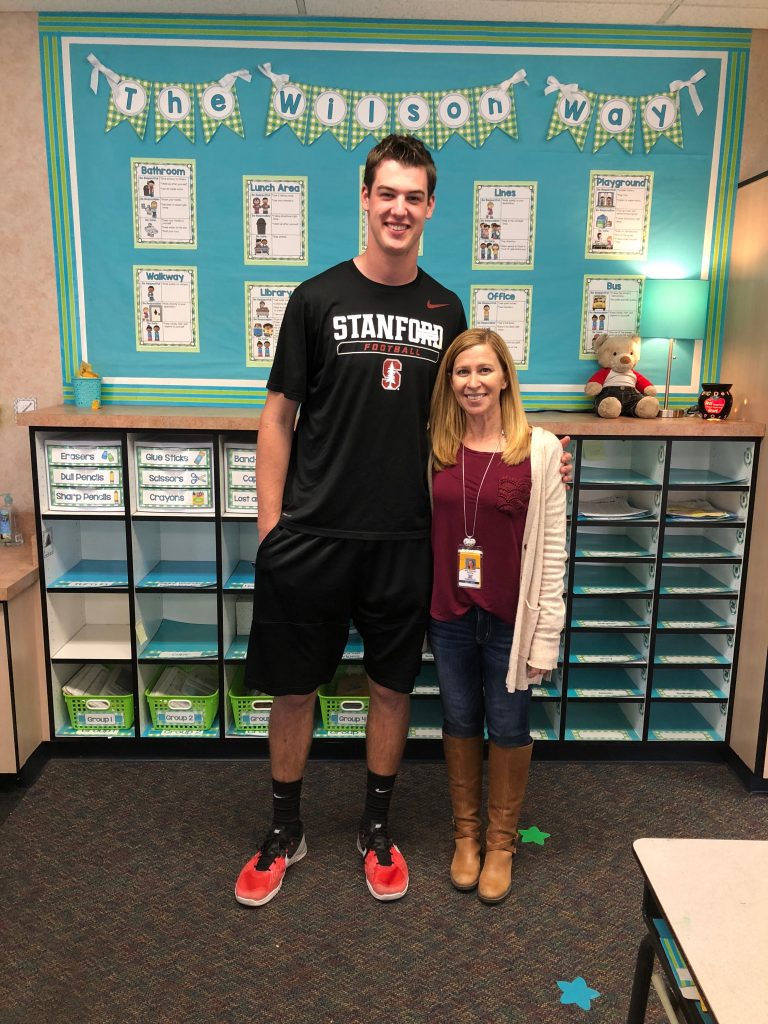 On Monday, one of my former students came to visit me.

BUT LOOK AT HIM!

His name is Tanner McKee.  Google him.  You will fall in love with his character, his morals, his story, his everything!  He had a TON of offers to play football  at a TON of different universities across the country next year.  He’s a Quarterback and while I don’t know diddly squat about football besides the fact that you can get really yummy snacks if you go to a game, I do know the Quarterback is important.  I don’t know if I necessarily need to capitalize the word Quarterback, but there you go.  So, any who, he signed with Stanford.  But he’s going to Brazil on a mission trip FIRST and Stanford is waiting for him.

I know.  I think that’s pretty amazing, too.

He was only one of three boys in my class the year I had him.  Believe me, I know that is crazy.  We were year-round then, and my partner teacher on the same track only had five boys.  We asked if we could have four and four, but our administrator at the time wouldn’t budge on the class lists.  Shoulder shrug.  It was one of the best (if not, THE BEST) classes I have ever had.  The girls were sweet and there was very little drama, plus I only had 20 kids because we were 20 to 1 back then.  Basically, my class was tidy and quiet ALL THE TIME.  I look back and I’m telling you, it was MAGICAL.

My three boys just happened to be neighbors and got along great.

Tanner came THIS.CLOSE to being taller than me that year.  I mean.  This family grows giants.  He is 6’6″ and his sister is 6′.  And another sister is 5’10” and his little brother is continuing to grow and appears to be on his way to 6’6″ too.

Anyways, when Tanner walked in our class on Monday, my kids literally said WHOA!!  And one of my girls said It’s like you could touch the ceiling!  And then Tanner reached up and touched the ceiling.  My class went WILD.

I told my kids what I say almost every single day . . . once you’re one of my kids, you’re always one of my kids!  And then they all said they would come back and visit me one day which is exactly what I love to hear, but then I automatically start doing the math and figuring out how old I’ll be and then thinking maybe I will be retired and sitting on my couch somewhere.  Not the beach because I am becoming more of a homebody in my old age – HA BUT TRUE.

It was a super fun and surprising way to end my Monday. 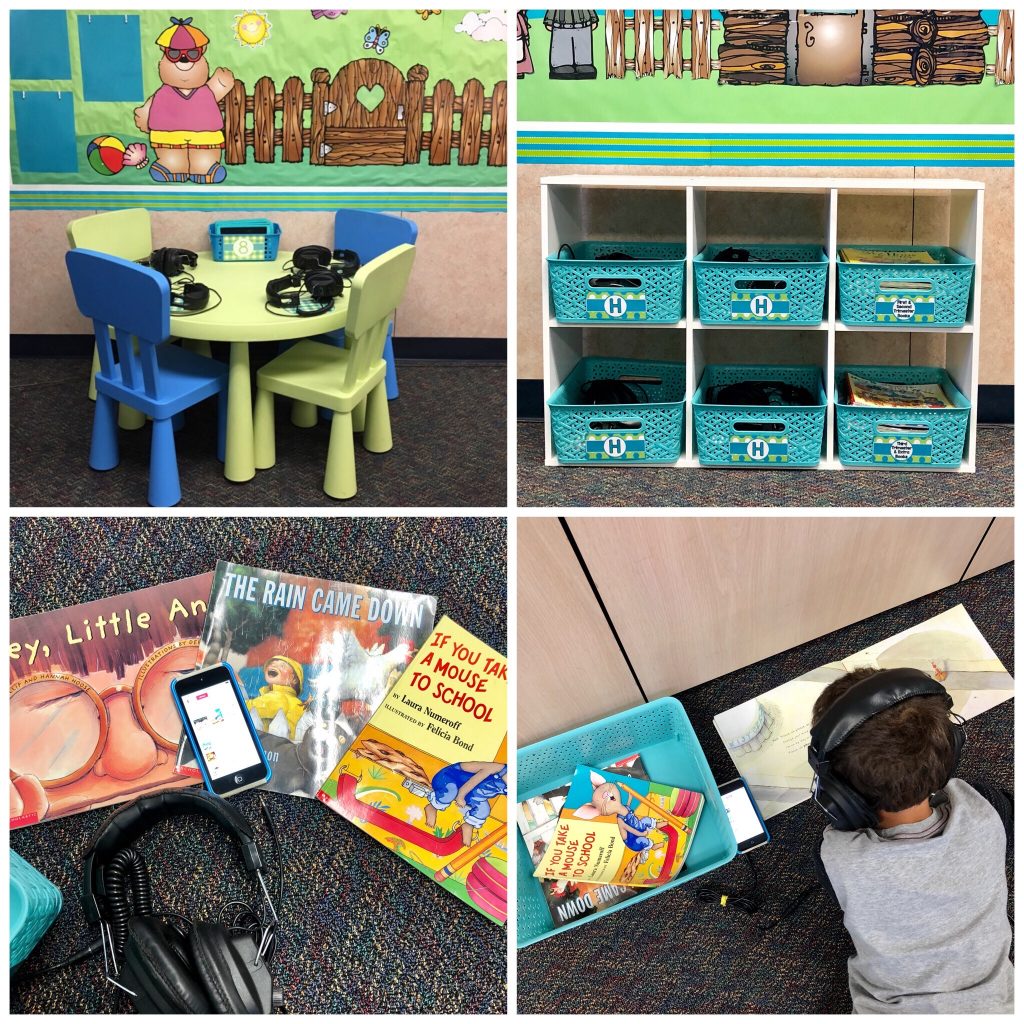 I changed my Listening Center.  You know me.  I’m always changing something.  Just not my grade level or my school or my husband or my house or what I eat for breakfast or what I eat for lunch or what time I wake up . . . Seriously, when I see people I haven’t seen in a long time and they ask me what’s new and how I’ve been, I’m like nothing’s new, and all is well, thanks.

I took almost this entire year to convert my cassette tapes into my iTunes library, but I did it!  I am finished!  You can read more about how I did that {HERE}.  I usually have 2-3 book choices for each round of centers so students have a little bit of choice during our center time (although, if they have time, they usually listen to all of them).

I love the look of the whole thing.  They just make me happy.

I had to push it against the wall because of the table legs.  I can’t explain it.  If I had it as a “floating” table, I needed to add a fifth chair to balance it out, and I didn’t have a fifth chair.  This is my brain.  This is how it works.  It didn’t look right with just four chairs if it was floating.

I had to push it against the wall to make it look right.

Once it was against the wall, the kids were kind of squished.

Add eight to twelve books, four headphones, and four iPods, and they were REALLY squished.

Most of the time, my kids took their books and iPods somewhere else to listen to the stories.

And, in the interest of being REAL and HONEST and TRUTHFUL, the little round circles that I taped to the table so the kids knew where to put their headphones so they didn’t get all tangled up WERE JUST FOR LOOKS BECAUSE MY KIDS NEVER PUT THE HEADPHONES ON THE CIRCLES EVER.  NEVER EVER.  Usually, the headphone cords were hanging off the table.  Once in awhile, a headphone would just be on the carpet.  Just sitting there.  ON THE CARPET.  WHEN THERE WAS A PERFECTLY GOOD, SUPER CUTE, LAMINATED CIRCLE THAT I CUT OUT WITH MY OWN LITTLE HANDS TAPED TO THE TABLE.  Yep.

So I said ENOUGH IS ENOUGH, I CAN’T TAKE THIS CUTE LITTLE TABLE AND CHAIR SITUATION ONE MINUTE LONGER!

That was probably around Christmas time.

And now it’s March.  The end of March.

I *finally* donated the table and chairs to a newish teacher friend of mine (Hi, Nicole!) and I bought the cheap Mainstay cubicle shelf from Walmart because it fits perfectly UNDER the bulletin board and doesn’t cover anything up so my brain is happy.  I got the baskets from Target.  And now . . . DRUMROLL . . . the book choices, the headphones, and the iPod are in individual baskets.

INDIVIDUAL BASKETS.  Take a basket and GO.  Be free!  Go, I said!

Our Listening Center is Center H on our Centers Chart which is why those baskets have an H.  And the extra two baskets are storing the books we are not using.

My kids said they liked it better this way, too!

If we do a Listen and Learn activity, I’ll add a clipboard to the basket, and I’ve recently added some fun pointers.

I miss the look of the table and chairs but that is all.  This new system is working out WAY WAY WAY better for me. 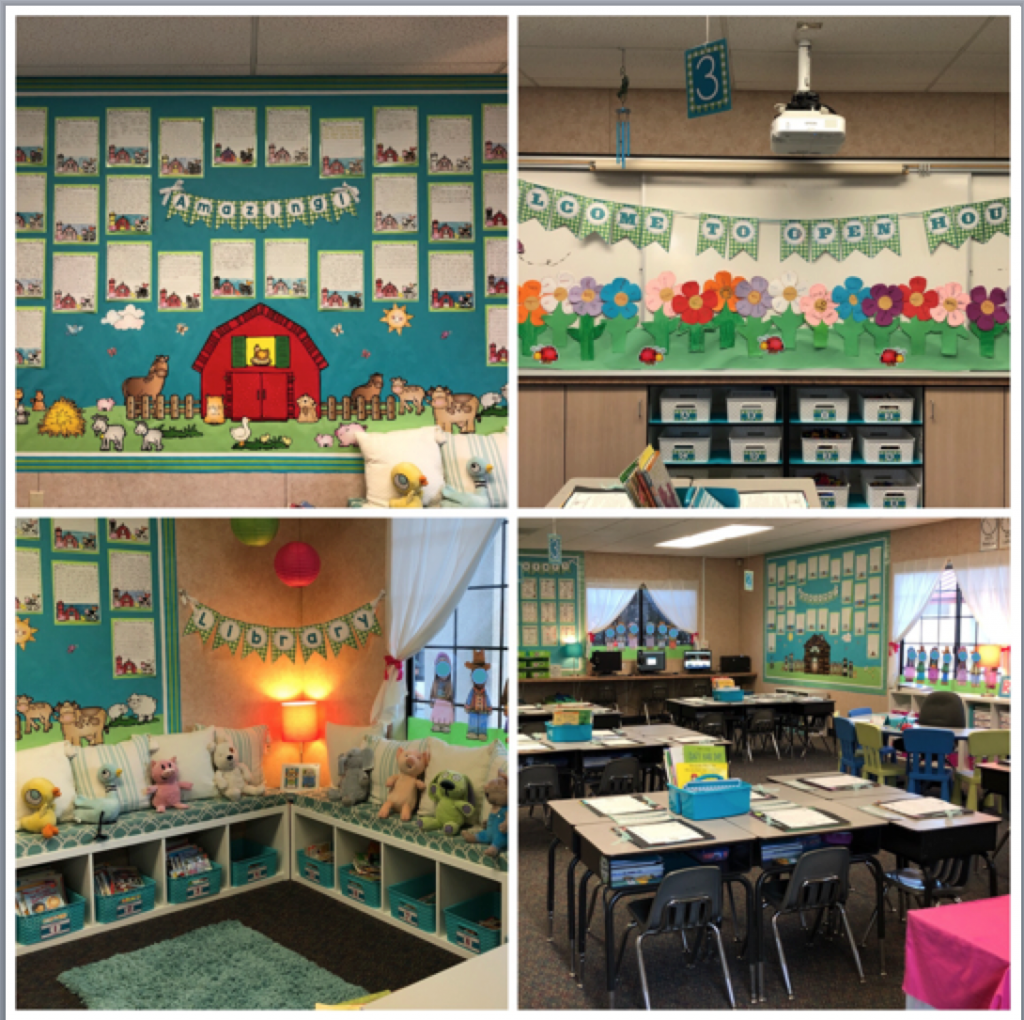 We had Open House on Thursday!

Over the years, we have toned it WAY down, and now it is not as stressful as it used to be.  One of our administrators encouraged us to be real and not have such a “dog and pony show”.  And most of us (in primary, at least) were a bit offended.

But she said she was trying to HELP us, that she saw us running around like maniacs, that we were showing things in our classroom that do NOT happen every day, and that Open House is meant to show the real classroom.

So then most of us started looking at each other like ohhhhh, hmmmm, now there’s an idea . . .

In the past, we had snack tables (and people would seriously come to my room for DINNER), and I bought each student a balloon, (which I do miss, but saving the money as well as the hassle of how I’m getting them to school, AFTER the kids go home but BEFORE they come back, and especially the whole HOW DO YOU DO GET THREE DOZEN BALLOONS INTO A MINI COOPER, not to mention the latex thing and how it’s outlawed or something like that) and we also sent home take-home projects (which I think the parents secretly HATED) and then hung them from the ceiling only to take them down the next day because they were big and huge and in the way . . .

Open House was a big deal.

But it wasn’t the normal, every day classroom setting.  And most (with the exception of four) of my parents WORK, and haven’t seen the classroom since parent conferences in October.

We almost ALL agreed and we said NO MORE SNACKS, NO MORE BALLOONS, NO MORE COTTON CANDY MACHINES (seriously, a second grade teacher did that), NO MORE CRAZY STUFF.

We still do our “themes” (Kinder is all about insects, we have pioneers, second grade has dinosaurs, third grade has space, etc) and our rooms still look fabulous (if I do say so myself) but we are much much much calmer.  The kids still learn, the kids still have fun, it’s just that the KIDS and THEIR WORK are the most important part.

It is so much less stressful.

It is still a FANTASTIC night and one of my absolute favorites!

PLUS, we all (almost all) wore grade level t-shirts and it was so so so nice not to be in a dress and wedges (which eventually become flip flops)!! 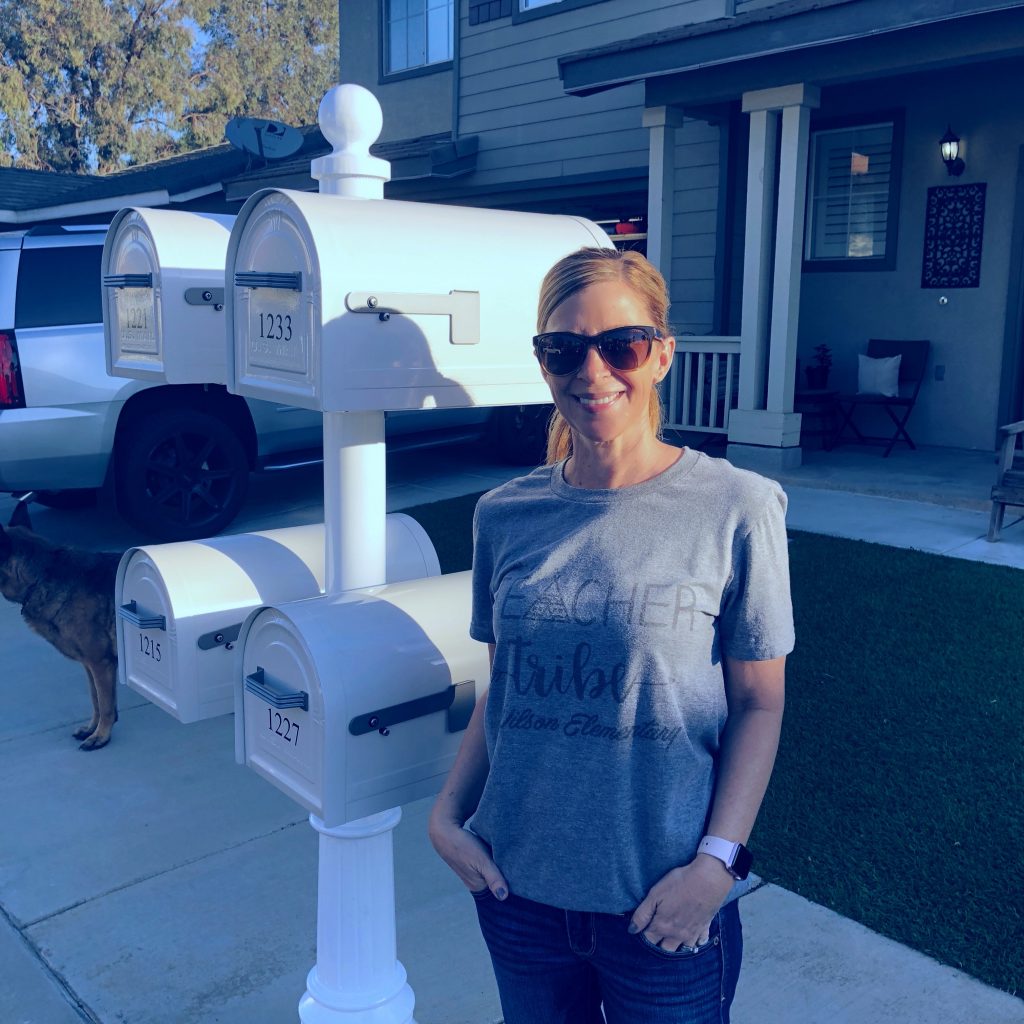 Our new mailboxes are taller than me.

Our neighborhood association took down the old mailboxes in favor of LOCKED mailboxes for mail safety reasons.

And when I drove home this week and saw the new mailboxes, I was like wow, those look really nice, I really like that pedestal column thingamajig that’s holding them up, wow, how is this free and not costing me anything, oh wait, I pay association fees, but STILL.  Those are nice looking mailboxes if you were looking at mailboxes lined up in a row in a contest of some sort.

I said as much to Steve and he said they’re ridiculous looking.

In almost every way.

The next day, I walked out to get the mail with the new mail keys.  And I thought shoot, something else we have to keep track of, and I wonder if I should buy a basket and shelf for this new mail situation of ours.

And then I stepped off the curb to get in front of the mailbox and THEREIN LIES THE REAL PROBLEM.

Because stepping off the curb made the mailbox EXTREMELY HIGH.  As if I’m at the grocery store and need something from the top shelf, and I have to ask a stranger person to get it down for me even though they saw me trying to reach it, and didn’t offer to get it for me because they were most likely filming me on their cell phone and dying with laughter on the inside.

And in the picture above, I AM STANDING ON THE CURB.

And yes, our mailbox is ON TOP.

But this is FEDERAL MAIL.

I don’t think we can trade with our neighbor.

I thought I would start my Spring Break off with a bang.  You know how I am.  Party Party Party.

Monday I am having another oral surgery.

I did NOT want to take two days off of school so close to Open House which is why I am in this situation.  My oral surgeon doesn’t typically do surgeries on Fridays because if something goes wrong, he wants to be in the office the next day.  So he only does surgeries Mondays through Thursdays.

I haven’t hung out with my handsome Oral Surgeon in awhile so it should be fun.  😉

He is trying to repair some stuff that is basically failing.  He won’t know how bad or how repair-able it is until he opens me up and takes a look.

I’ll be asleep.  Which, if you look on the bright side, is actually a very nice way to start Spring Break and really all I wanted to do anyway.

Steve arranged for Murphie to go to Day Care on Tuesday so I can just sleep the day away and recover as quickly as possible because on Wednesday, Kerry arrives!  Our dad is retiring and we have a big party planned on Saturday, April 7, and we will have a lot to do to prepare.

I basically have Monday and Tuesday to recover and then I need to be done with the whole stitches/pain/not eating thing.

If you feel so inclined, I would love and appreciate your prayers that everything is repair-able and that I heal quickly!!

🙂  Have a wonderful weekend and a Happy Easter!