Happy Saturday!  It’s about time.  I seriously thought this was a loooong week.  We are taking Murphie to the dog beach for the first time today.  It should be a great day, followed by an early dinner with my mom and dad.  🙂  We are going to a place called 50/50.  Or Fifty/Fifty.  I’m not sure.  Anyways, they are famous for their half hamburger/half bacon patties or something like that.  This trip is completely for my hubby.  I’m not a vegetarian in the least, but I tend to like the “sides” when meat is involved.  The sides being french fries, onion rings, milkshakes, etc.   This place has those sides so I should be good to go.
I’m linking up with Doodlebugs Teaching again! 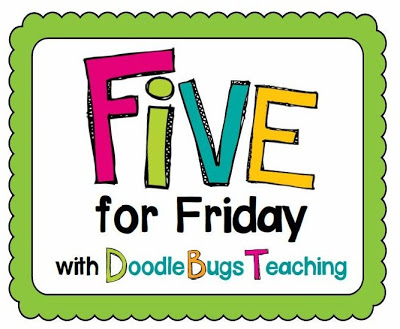 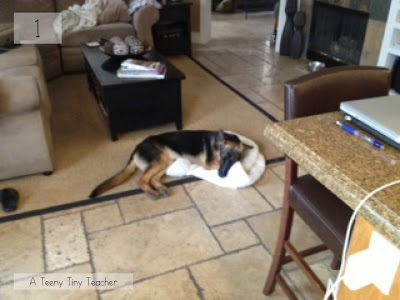 Well, isn’t Murphie the cutest thing ever?  Does it even matter that she dragged this bed out of her crate and into the living room?  I don’t think so.
By the way, you might notice that the crate is no longer next to the couch and that the Pottery Barn end table has returned.  This is mainly because
a) she is never in her crate now that she goes to daycare and to work with my hubby
b) I couldn’t stand it
c) it’s in the formal living room because it goes better with the decor and our theme of “Furniture That Never Gets Used But We Had To Buy It So The Room Isn’t Empty And Echoes When You Talk” (that was only for two years)
d) all of the above. 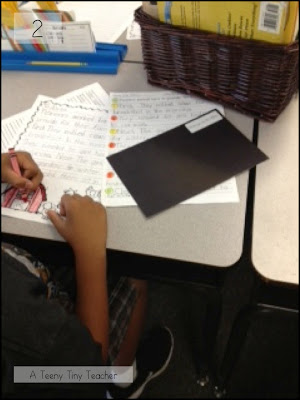 This is the last piece of writing that needs to go up on a bulletin board for Open House.  It’s also quite possibly the LAST FINAL DRAFT we will write this year.  Summer is so close that I find myself saying things like that a lot:  This might be our LAST final draft.  This might be our LAST spelling test.  This might be our LAST rotation of centers.  This might be the LAST TIME so-and-so toots on the carpet and makes the whole class pinch their noses and giggle.
Until he toots later on again in the afternoon, and then I know the LAST time will be on the LAST day of school during the LAST five minutes.
I wonder if there is an end of the year award for One That Toots The Most? 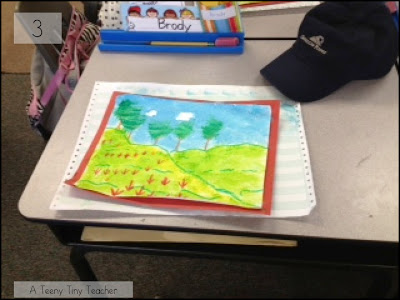 LAST Art Smarts Lesson.  We only get Art Smarts once each trimester.  It is my version of Specials.  Except that I have to stay in the room and pretend I’m not in the room or otherwise I want to take over and use my signals and get the kids to stoptalkingalready.  You can read about an Arts Smarts lesson gone wrong from last year {HERE}.
Anywho, I have absolutely no recollection of the artist we studied even though we just had the lesson on Thursday.  Seriously.  Not a clue. Anyone recognize this piece of work?  I know it’s not Picasso.  We already did that one.  And that’s about all of the famous artists I can think of right now . . . 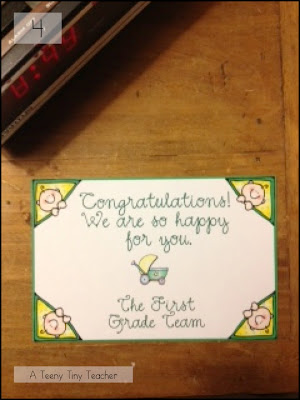 School baby shower for the friend whose personal shower I went to a few weeks ago.  Our team didn’t want to get her the “left overs” on her registry which didn’t really amount to a theme or anything resembling a theme so we went with a gift card.  (Unless you call baby wipes, teething rings, and a car seat that we couldn’t afford a theme.)
And then I forgot to get a card.
So I made one.
At 8:49 at night because that’s normal.
Also, it’s normal to work in your bedroom.  Especially if your back was hurting due to working at the top of the stairs. 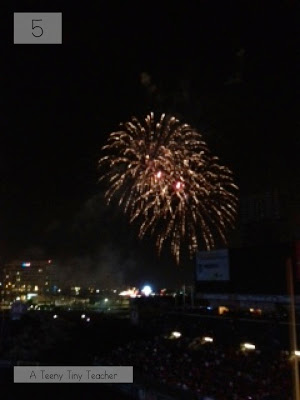 Hadar and her boyfriend invited the hubs and I to the Angels game last night.  It was a super short game.  As in, two hours and 20 minutes.  Hadar apologized because she was afraid the game was boring.  I do hold her personally responsible, but I’m over it now.  Mostly because she brought snacks.  Peanuts and Cracker Jacks, to be exact.  Also because of the AMAZING fireworks show at the end.  She was responsible for that, as well.  🙂
Not to mention, there was a pre-K girl sitting behind us and she kicked the back of Hadar’s seat over and over again.  She kicked her in the head, too, but that’s neither here nor there.  Especially since her parents (grandparents?  foster parents?  guardians?  kidnappers? not really sure) weren’t embarassed about it in the least.
Let’s not forget that I’m a Dodgers fan and none of those shenanigans would have happened at a Dodger’s game (she said sarcastically).
So there you have it.
My Five for Fraturday.
How was your week???
« Currently
Fabulous Feedback Linky »