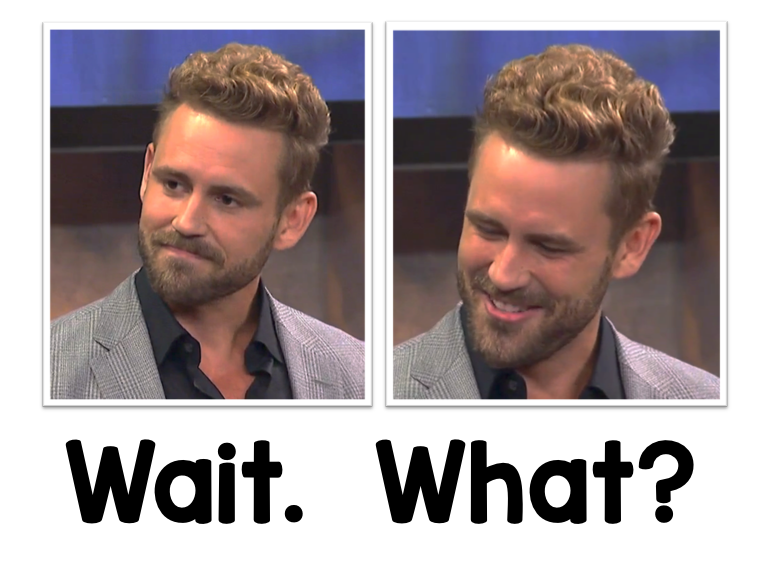 What world am I living in?

Nick is going to be the new bachelor?!

I’ve seen mixed reviews.  Some people are thrilled.  Others are disgusted.

And then there’s me.

I’m sort of in the middle.

Okay, first I did not like this Nick guy AT ALL.  AT ALL!  I haven’t gone back to read my Talk About It Tuesday posts regarding Nick, but I’m pretty sure I made fun of his hair and the way he talks.

And I think he was a big ole baby.

And I was NOT a fan.

Bachelor in Paradise has shown him in kind of a whole new light.  And sometimes . . . am I really saying this . . . I kind of actually like the guy.  Because he told Ashley I. (who never stops crying and never stops obsessing over poor Jared) that IT WAS NEVER GOING TO HAPPEN WITH JARED.  EVER.  NEVER.  NOT EVER.  I mean, he just told her straight out and I LOVED IT.  Someone needed to because Jared certainly wasn’t going to.  And he said it in such a way that you couldn’t be mad at him because we were all thinking FINALLY!  THANK YOU, NICK!  (Not that it did any good because Ashley I. is a tad bit crazy and lives in a world where she and Jared are dating even though Jared is dating Caila)

I think Nick is growing on me.

WHAT AM I SAYING?!

I don’t know what I’m saying.  But it should be interesting.

And, because it’s a three day weekend, and I feel all sorts of footloose and fancy free, and as if I have all the time in the world in front of me, I’m going to go out on a limb and say that you can count on Talk About It Tuesdays this season with Nick. 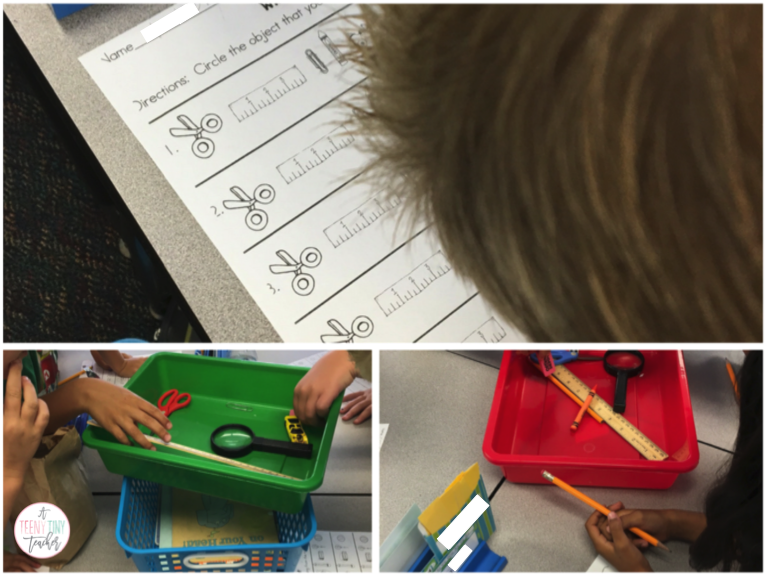 We have been studying the Five Senses in Science and having a blast!  For seeing, I used this little activity where I added a bunch of objects to a tub (one tub per table group) and then for each round, I would remove one of the objects.  Students had to use their sense of sight to figure out which object I removed.  I did make it a tad bit easy for them because I gave them this printable which has all of the items listed so it was more a process of elimination type of thing.  BUT some table groups still had some trouble even though they used the magnifying glass to see better and everything, Mrs. Oldham. 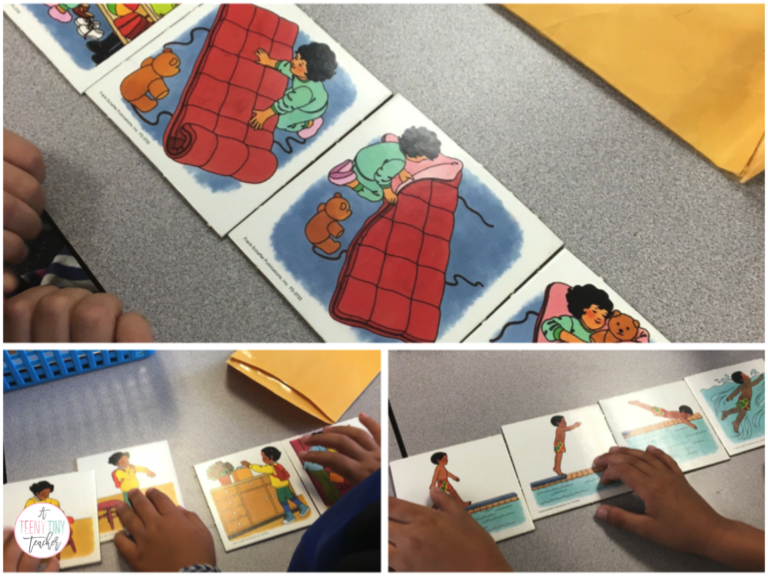 We have also been working on sequencing.  I have these very very very old sequencing cards that I purchased from our local teaching supply store a million years ago that have proven to be a useful purchase.  I think there are about ten sets total.  I’m not sure because I also always lend them out and have no idea if I still have all the sets.  I had students work in groups to put the cards in order and we practiced using first, next, then, finally, etc.  I switched the sets from group to group so they had multiple times to practice and then each group shared out.

Fun was had by all, let me tell you.

We then took our newfound sequencing skills and started putting stories in order, as well.

We are geniuses.  We are experts.

You should have seen us. 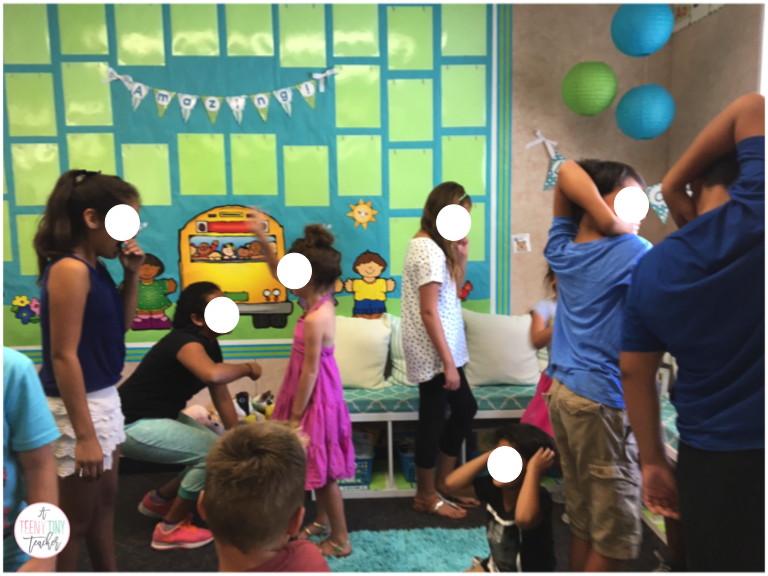 This year, I’m buddying up with one of our sixth grade teachers for Big Buddies.  Her daughter just happens to be in my class so it’s perfect.  Our goal is to get together twice a month for thirty minutes at the end of the day.  Our first day was this week AND OH MY WORD.

And some used to be my first graders so I embarrassed them because as the saying goes (I say it all the time) once you’re one of my kids, you’re always one of my kids.

And these 6th graders were so sweet to my first graders!

The sixth grade teacher had a great idea (which was great since I had NONE to speak of) to use GoNoodle for our first activity together.  And we used GoNoodle with a purpose!  We watched Secret Handshakes #3 (her students had been practicing on their own) and each sixth grader took a first grader to do it with.  We did it a few times until my kids felt more confident and sure of themselves.

THEN . . . each sixth grader/first grader team CAME UP WITH THEIR OWN SECRET BUDDY HANDSHAKE!

They were so creative!  We had them share out (not so secret, I guess) and it was so much fun to see what they came up with.

These kids bonded so quickly!  It was adorable!  Some were holding hands with their little buddies right away.

Of course, as it always happens, we started seeing our 6th grade buddies everywhere on campus after that.  Which is extremely weird because our sixth graders are clear on the other side of our campus, have no recesses or lunch anywhere near our times, and I can basically go an entire week without seeing a sixth grade teacher so that when I do run into one of them, I say Do you even work here?! I never see you!  all hilarious-like.

Now every time we see our 6th grade buddies, my kids wave and hoot and holler and try to do their secret handshakes from afar. 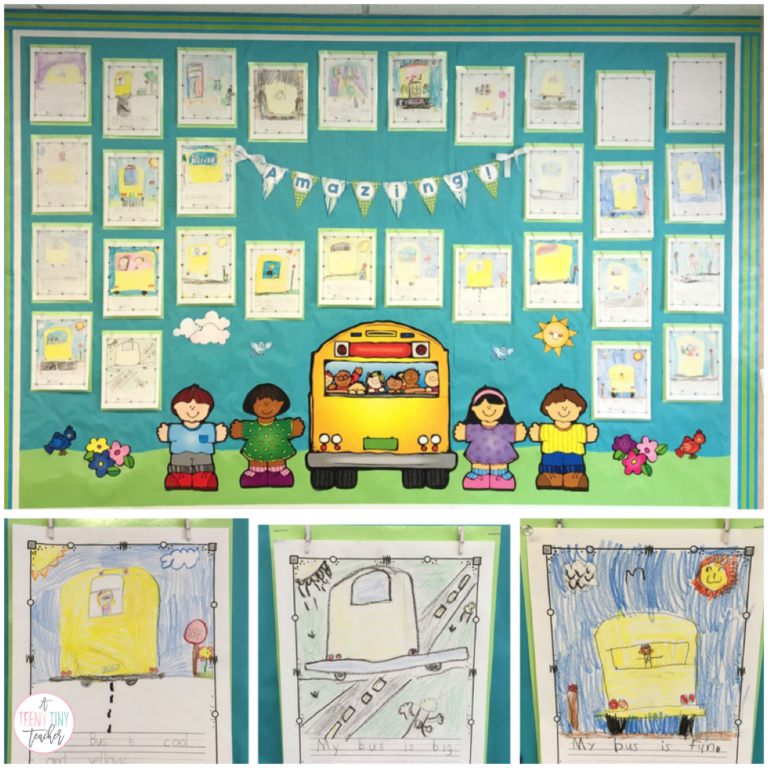 I *finally* got some work up on one of our bulletin boards!  YAY ME!  I had the brilliant idea of using Jennifer’s Directed Drawing of a bus to do a little bit of drawing and a little bit of writing.  We’ve been working on writing one to two sentences with a capital at the beginning and a period (for now) at the end, as well as sounding out some unknown words.  I gave the sentence frame My bus is . . . and then they filled in the rest using their stretchy sounds.   They turned out SO CUTE!

I have one little guy who is still working on his and I just had another little student leave.  🙁  That’s why there are two blank ones on the board if anyone is wondering or going to leave a comment to ask me why I did that.

Oh, and do you see the picture on the right?  That clip broke off.  Last year or maybe the year before.

I have a glue gun.

And I’m sure I will.

I mean it’s a priority.

I’m going to get right on that.

After I drink my coffee and enjoy my three day weekend.