I mean, it’s already Thursday!  And tomorrow is Friday!

Look at me!  I know my days of the week.  I would be proud except it’s a clear sign that summer is long gone.

The other day, I pulled out an oldie but a goodie grammar lesson on capitalizing names.  It was not a proper noun lesson . . . more like a PLEASE PUT A CAPITAL LETTER AT THE BEGINNING OF YOUR NAME.

PLEASE STOP PUTTING RANDOM CAPITAL LETTERS IN THE REST OF YOUR NAME.

OR MAKING YOUR NAME A PATTERN OF CAPITAL LETTERS AND LOWERCASE LETTERS.

Boys and girls, we only put a capital letter at the BEGINNING OF OUR NAME.

AT THE BEGINNING OF OUR FIRST NAME.

We’re not ready for last names.  Nope.  Not when you tell me you don’t have a last name.  Nope.

So here’s what we did.

This is NOT my idea.  I actually got it out of the Houghton Mifflin curriculum that my district uses.

Every year, my kids LOVE this activity.  So I highly recommend it.

Here’s how it goes: 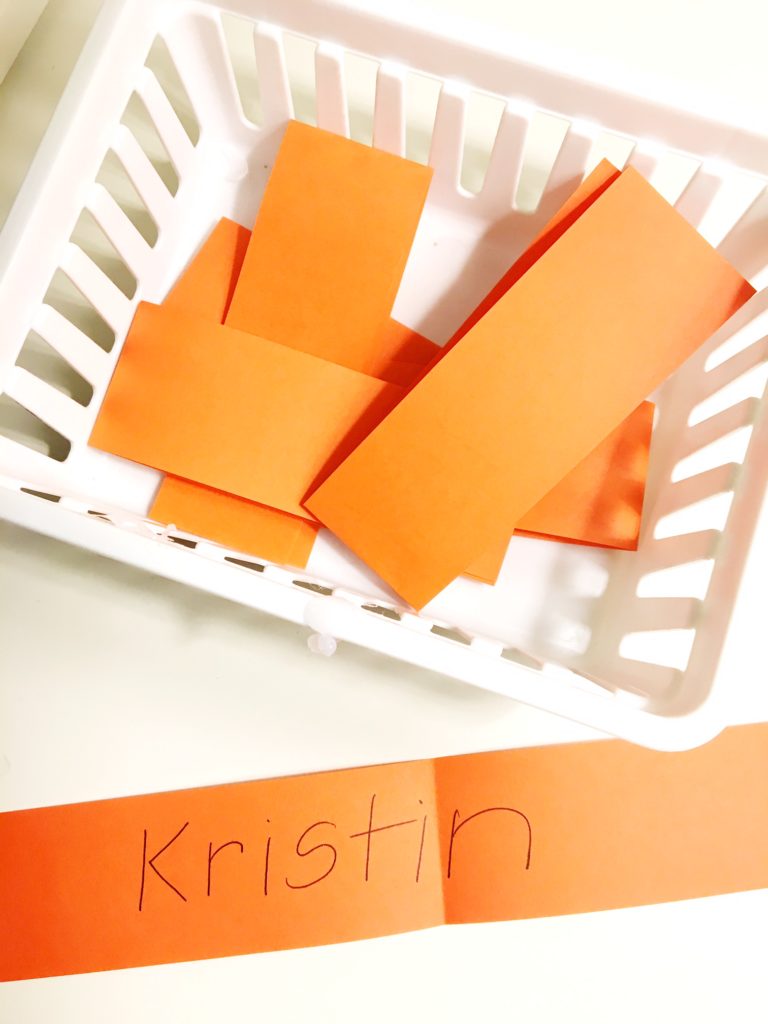 Pass out a strip of paper to each student.  It helps if it’s a dark piece of paper so that the writing doesn’t show through.

Tell them to write their name with one large capital for the first letter in their name, and lowercase letters for the rest of their name.  You might need to double check these, but I was short on time so I lived dangerously and I didn’t.

Because I said so.  And I don’t want this to take all day.  The folding or the unfolding.

Once all the name strips are folded in half (one time only) and in the tub, have the kids sit on the carpet.

Have a kid come up (I chose my Teacher’s Pet to start things off) and pull a name out of the tub.  Without showing the class, the student needs to start spelling the name on the strip of paper.

With a very large emphatic CAPITAL before any other letters are said.

For example, the kid would say “Capital K, r, i, s, t, i, n” . . . and the students on the carpet would politely raise their hand to guess the name.

Or, in my case, we would shout out the name.  Either one.

Whichever works for you.  Like I said, I was running short on time.

The key here is that the student spelling the name on the paper has to actually say the word capital.

Then Kristin (because it was her name on the piece of paper) gets to come up and it’s her turn to pull a strip of paper out of the tub.

Without showing the class, she spells “Capital M, u, r, p, h” —– and because we might only have one student in our class with a name that begins with m, the whole class starts yelling Murphie!!! Murphie!!!

It gets tricky when you have a lot of kids with the same first letter.  I have five students whose names begin with J this year so that was fun.  Especially when the little guy whose name begins with J, and was just spelled out entirely, and all four of the other J names were guessed and it wasn’t them, just sits there all quiet-like as if he has no idea whose name that could be which is spelled exactly like his.  Tricky, I tell you.  😉

But it IS fun!  I don’t know why!  It’s a guessing game, and it’s our NAMES, and it’s practicing saying CAPITAL, etc.

Fun was had by all, let me tell you.

At the very end, because there is only one name left and that person comes up to a tub of NOTHING (because all of the strips have been pulled out), I throw a few back in there for that kid to choose from.  It’s all good.  No one is last.  No one.  Or they earn gold tags.  🙂

Also, if you have a large class size like mine, take a break in the middle of the game.  We went to recess.  There was only so much of this I could take.

PS  Yes.  You will get kids who come up and start spelling super fast like this:  k-r-i  — AND YOU HAVE TO STOP THEM AND SAY HOLD IT!  HOLD IT!  WAIT JUST A MINUTE THERE, MISTER FAST AS A SPEEDING ROCKET DUDE!  WHAT DOES THAT FIRST LETTER START WITH?  And then they start over and say CAPITAL K, r, i and look at you like you have lost your mind and like they’re a little bit scared of you.

That’s how you know you’re playing the game correctly.