So Halloween on a Monday followed by Tuesday, Wednesday, Thursday, and Friday makes for a very long week.

And the fact that we GAIN another hour tonight is PURE HEAVEN. 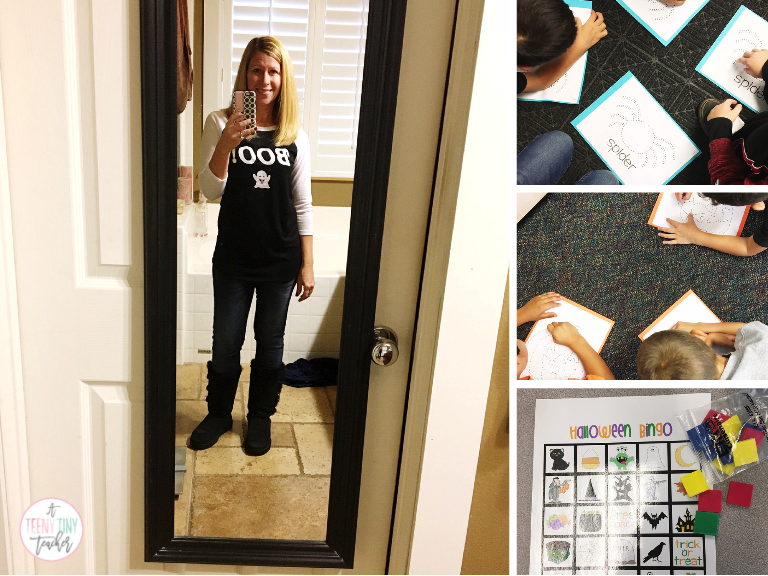 So there I am in my Target Tee.  I bought that t-shirt back in September in a that’s cute, I like it, throw it in my cart sort of way (along with about fourteen other items I had no intention of buying as is always the way when at the Circle Boutique) and only remembered I had it on Monday morning.  And it was COLD that day.  I think the high was 68 degrees which is why I wore my Uggs and felt a little sweaty around 2pm.  😉

We did some spider pin art from the lovely Mel at From the Pond and also a jack-o-lantern one that is from who knows, it’s as old as the hills!  My kids were SO QUIET.  It is the only way to go on Halloween.

It is also the only time my admin has walked in my room for the entire month of October so hello there, yes, we are using dangerous push pins to poke paper and it’s super academic and WHY DOES THIS ALWAYS HAPPEN TO ME, WHERE WERE YOU WHEN WE WERE COMPARING AND CONTRASTING BATS AND BIRDS AND/OR FINDING THE EVIDENCE IN OUR BROWN RECLUSE ARTICLE?!

Later on, we played Halloween Bingo from the Pioneer Teacher.  That was a last minute hey, I think I have a Bingo game somewhere so I just gave out gold tags to the winners and then at the end, because I’m a big ole softie, I gave everyone a gold tag because in my class EVERYONE’S A WINNER!  That’s what I said while I walked around giving out gold tags.  And you’re a winner, and you’re a winner, and so are you!!

Go ahead and blame me for the future adults of our society. 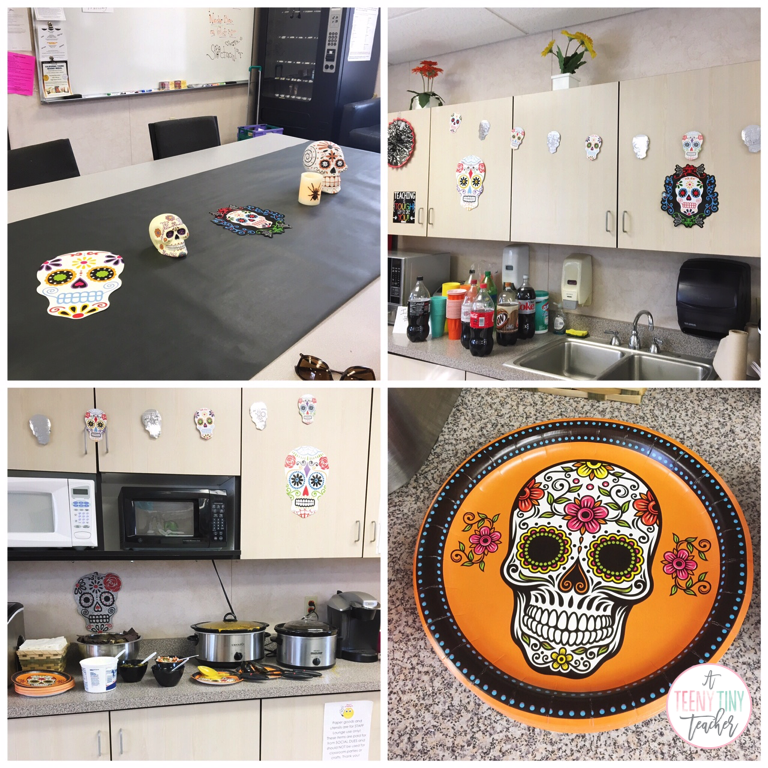 Number one in Five for Fraturday was everything that happened on Monday.  So is number two.

It was the Kinder team’s turn to bring treats and snacks  —  and they provided a NACHO BAR.

Which is what everyone needs when Halloween is on a Monday.

There was melted cheese and regular cheese and chili and olives and toppings and yummy goodness that beat the pants off the tuna and crackers I had packed for myself because I knew I would be eating candy for dinner that night.  I have a balanced diet, don’t ya know.

I loved all of the decorations!  The first grade team actually SAT IN THE LOUNGE to eat all of the deliciousness.  We usually work through our lunches and go out on Thursdays (although that’s been scarce lately).  It was AWESOME. 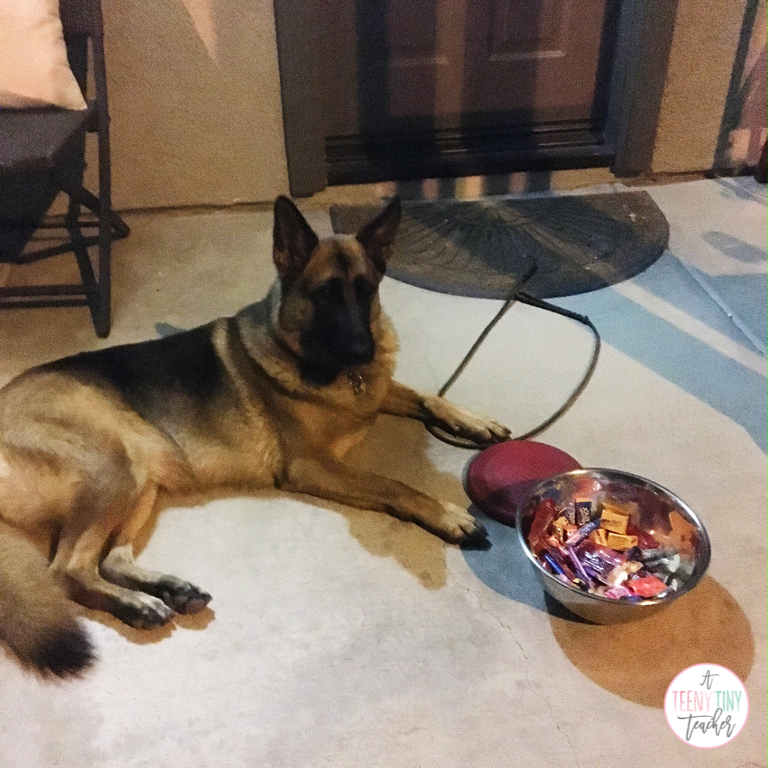 Number one and Number two in Five for Fraturday happened on Monday.

And so did Number three.

That’s because MONDAY WAS THE LONGEST DAY IN THE HISTORY OF MANKIND.

Steve and I sat out on the porch with Miss Murphie and a glass of wine.

We had a lot of trick or treaters and some of them were as cute as buttons, or, actually, princesses and Scooby Doos, and Sponge Bob Square Pants.  But some, the teenager kind, were downright scary.

And Murphie didn’t do a darn thing!

I thought she would at least growl or sit up and block me from the scariness, but she just wagged her tail and looked on.

And can I just say that this was NOT the year to have your child dress up as a scary clown, either?  We had two.

It took everything in me not to say No.  Just no.  No candy.  You get nothing!

But just one piece.

And not the good kind.

And by ran out, I mean, there was nothing left in any of the bags and there was no way we were going to get into the stash we had set aside for ourselves. 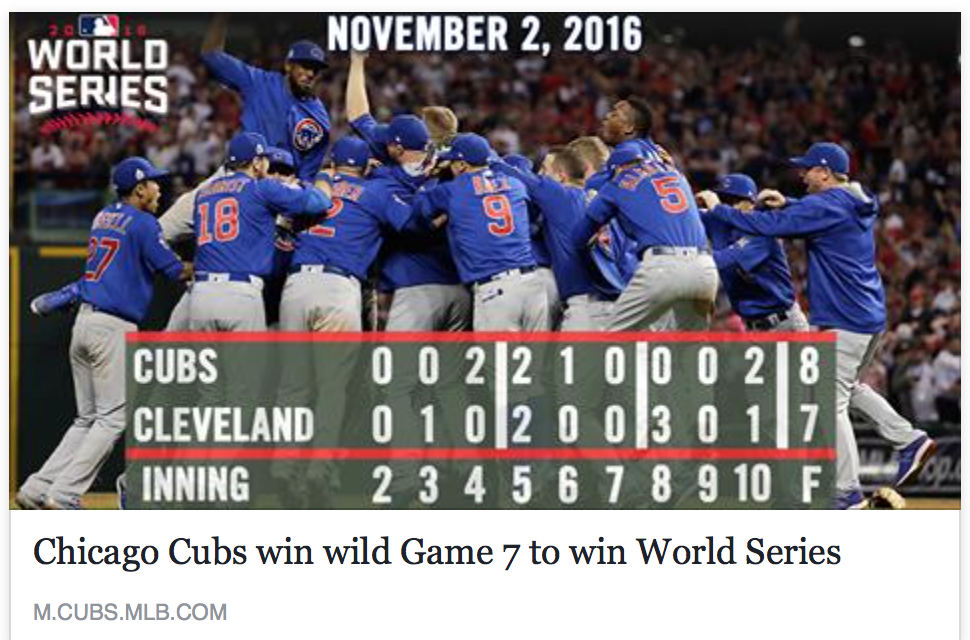 So you might remember that I said if the Dodgers didn’t beat the Cubs in the playoffs, I would root for the Cubs.

I did.  I turned into a Cubs fan and I knew a lot of the players’ names and I was into it.

I was just as obsessed with the World Series as I was with the Dodgers in the Playoffs.

But game 7 of the World Series was INSANE!!

I loved it all. 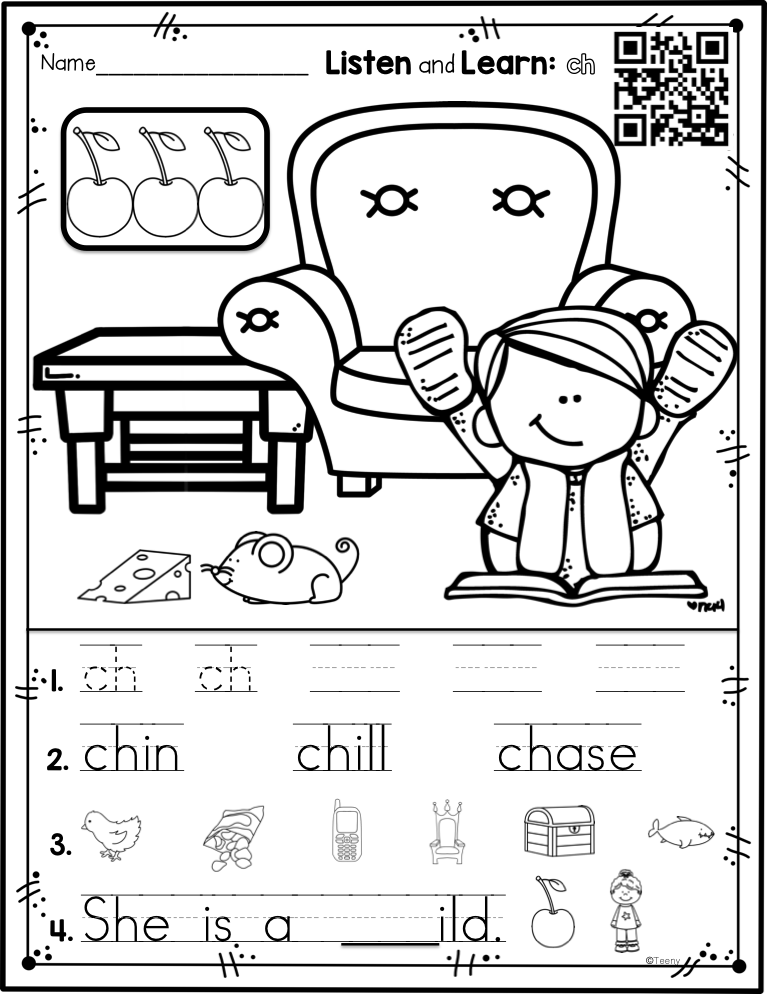 For all of those you asking about when I’m coming out with a Digraphs version of Listen and Learn Activities, I’m currently working on it!  I hope to have it in my store by next weekend, but I can’t promise anything because of this full time job thing I do called teaching.  And it takes up a lot of time, if you can believe it.

It will for sure be up before Thanksgiving!  Ha!

I’m going to be sitting here in my pjs with coffee and my laptop, creating away while watching something dumb on TV, I’m sure.