Hello and Happy Saturday and Happy Weekend, I barely made it!!

It was a LONG week.  I still have the eye floaters and I caught a nasty cold with a terrible sore throat, and yet I still went to school because I am stubborn (said Steve).

I saw the ophthalmologist yesterday and she said I had a complete viscous tear (the fluid completely POPPED) which is why these floaters are so much worse than they were last October.  And that last October, I probably just had some fluid break off, but not completely.  The good news is it won’t ever happen again.  It’s not like we build up more fluid so there you go.  I’m basically in a holding pattern for about six more weeks while I wait to get out of the danger zone and the risk of having a retina tear, hole, or detachment.  Apparently, after two months, the risk goes way down.  In the meantime, I’m not supposed to ride roller coasters or go on high speed boats or even do downward facing dog during yoga.  Good thing I quit yoga last summer is what I said (as if I was a Yoga master or something when all I really did was try to stay upright at home while watching a Yoga DVD).  When I asked if I should stop walking on the treadmill, she laughed.  😉 I’m praying for God to protect my retinas every day!  And each day, I feel like the floaters are getting a bit better (in that I don’t have as many at one time or as constantly) and she said that’s a good sign.  She did say they’re directly in the center of my vision, and that she feels sorry for me which is really all I need from a doctor.

I am ready to hibernate like nobody’s business this weekend.

Because of that, I’m going to copy and paste a little blog post from a few years ago right below because this is what is currently happening in my classroom.  And maybe you feel the same way.  🙂 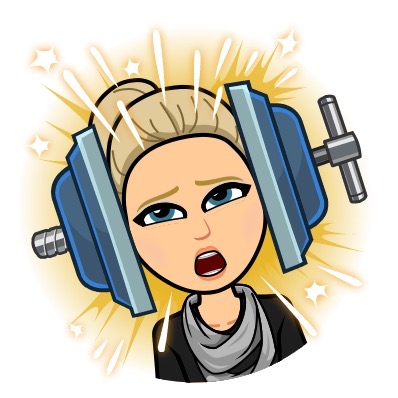 We’ve been working mostly on following directions for the past couple of weeks.

And we are getting better.

For the most part.

For example, the first week, things looked a little like this:

Me:  When I call your name, come to your cubby.  Don’t bring your backpack.

FYI – I have a No Camping Policy at my cubbies.  My kids are not allowed to bring their backpack because then they tend to camp out and put each paper into their backpack one at a time and it is so slow and deliberate that I feel like I might lose my mind and I am afraid that I might end up grabbing all of the papers and crumpling them into nothingness and then shoving them into the offending backpacks and then tossing them across the room to get the kids to go follow them so that we have more space at our cubbies.

So . . . NO BACKPACKS AT THE CUBBIES.   There are just way too many of us.  We call it No Camping Out or Making S’mores.

As I was saying.  Things looked a little like this last week:

Me:  When I call your name, come to your cubby.  Don’t bring your backpack.

Me:  We are getting ready to go home.  It’s still an hour (or two) away, but this is going to take awhile.  Trust me.

Fourteen other kids would come to their cubbies.  Some with backpacks.

Some came with work they wanted to show me by shoving it into my face and saying, “Look!  I finished!”

Some came with nothing except a confused look on their face.  The poor little babies.

Others came with nothing except to tell me that they are reading a chapter book at home and they have a glitter bookmark and it practically lights up if you put it to the side and look under the lamp that they got for their birthday and did you know that they are six already?

I would have to take a deep breath.  And smell the soup.  This is where you breathe in deeply like you are smelling the soup and then you let the air out through your mouth as if you are blowing on the soup to cool it down.

We smell the soup a lot in my class.  Sometimes, it’s just me.  Other times, it’s a group effort thing.  And sometimes, it’s just a kid all on his own because he can’t open his math paper, even though he actually can, it’s just that he has it turned over and so he’s trying to open the fold which doesn’t work (I mean, it’s a FOLD), and meanwhile the AC unit is blowing the other side wide open and it’s flapping in the wind, but he can’t see that at all because he’s concentrating so hard on the folded side that will not open.

That was just an example from today.

Anyways, after fourteen children arrived at the cubbies when I just asked three to come over, I had to use the signal.

By the way, this signal only works if you’re really firm the first few times and, even though it hurts you more than it hurts them, you take away a gold tag from the two or three kids that think they don’t have to put their hands on their heads, or the ones that think one hand on their head while the other hand is still coloring somehow counts, or the one that thinks he can talk to his friend because his hands are on his head.

So I had to use that signal a lot the first week.

And then I would have to repeat the directions with a lot more words.

Kids:  Okay!  (and lots of laughter because I am a riot, don’t ya know)

The second time around, only eight or nine kids arrived.

I was able to call table groups.

And only the table groups came to the their cubbies!!!!!!!

It was almost perfect.

Except one little guy didn’t come to his cubby.

And when I reminded him, he brought his backpack and he built a fire and he made s’mores.

And darn it, if he didn’t take every single paper out one at a time to fill up his backpack . . .

I had to look away and smell the soup.