Let me begin by saying that I hibernated all last weekend and it was absolutely wonderful and just what I needed!!

This week flew by and I am so happy to officially be in the fall season.  Never mind that we are not experiencing any fall weather whatsoever at all.  Who cares.  I might just throw on a scarf, and boots, and buy a Venti Starbucks to hold just-so in my right hand, and have someone take a picture of me with my head cropped out JUST FOR THE FUN OF IT ANYWAY. 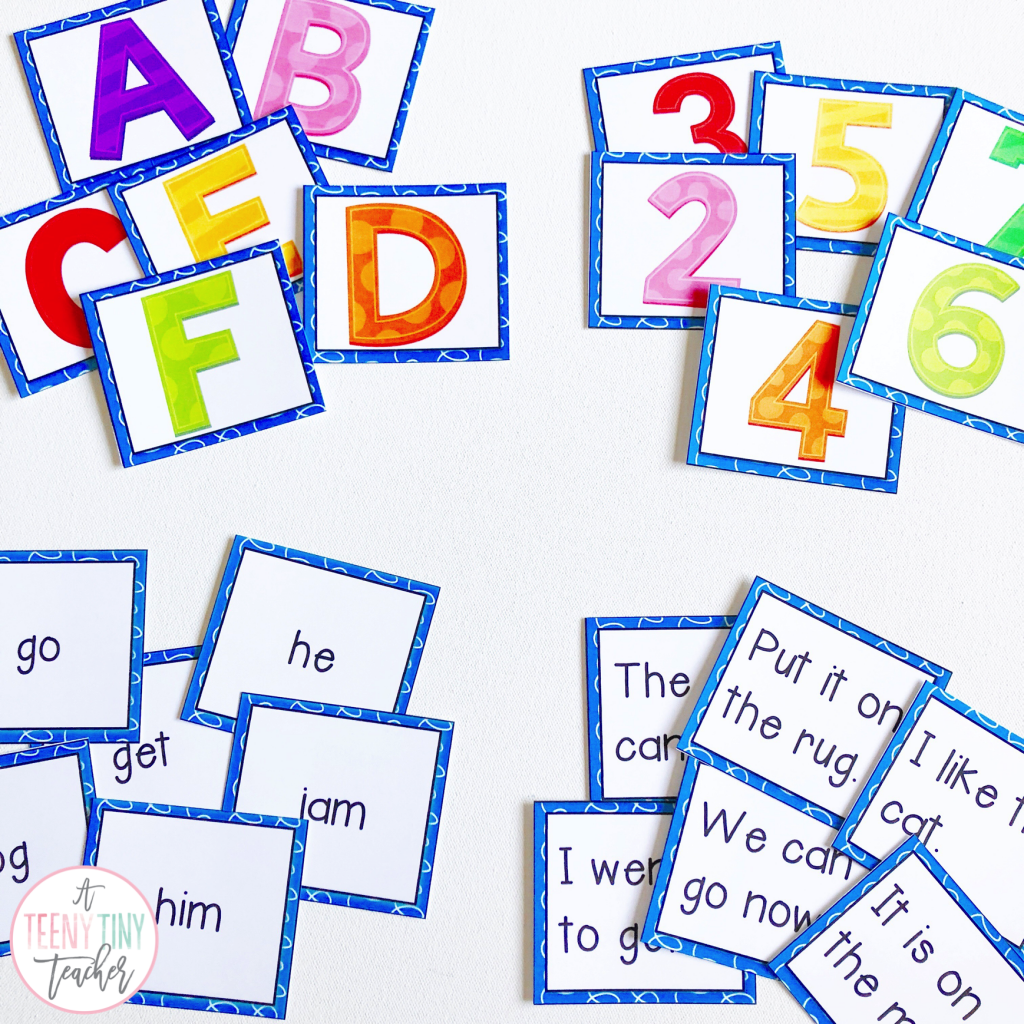 This is sort of, kind of a commercial.  But not really.  Because you do NOT need to purchase this.  You can make this on your own with index cards. When I first started this, I did just that.  However, we’ve been practicing a lot, and the index cards haven’t held up that well so there you go.  Cardstock and laminate are my BFFs.  And, I really do like cute fonts more than my printing even though my printing is an actual font, but still.  You know what I mean, right?

I created a new little pack I’m calling “Let’s Sort!” and then there are a bunch of other words after that because I am long winded and I like long titles.

This pack came about organically through the trials and tribulations of my own first grade classroom this year in which I may have asked a kid (or nine or ten kids or the entire bunch of them) which letter in a certain word was the vowel and someone replied SEVEN.

Or that other time when I said what did you write here?  Can you read your sentence for me?  And someone all cute with dimples and no teeth replied pizza.

I think it has something to do with the fact that I can ask where is your whiteboard? and a kid will answer with My dog threw up on the rug, and my baby brother stepped in it, and my mom cried, and then we had pancakes for breakfast.

So.  This was necessary because we obviously need to KNOW and PRACTICE the difference between letters, numbers, words, and sentences.  Never mind the fact that we also need to work on WHAT IS A QUESTION, but that’s coming up later and this is called BABY STEPS and please stop looking at me like that.

The best part about this is that when I first introduced this sorting activity, we crossed the “rigor divide” which is HUGE right now at my school.  That’s a whole ‘nother post, but the gist is STOP GIVING YOUR KIDS ALL THE ANSWERS AND TELLING THEM HOW TO THINK.  I’m yelling at myself by the way.

I passed out a card to each student and asked them to sort themselves into groups of two or three or however many they thought went together in a group.  I didn’t tell them HOW to sort themselves – I just said be ready to EXPLAIN HOW you sorted yourselves.

There is no right or wrong answer when there is no sorting rule.  So we clapped for each word in this phrase (which I learned at the crossing the rigor divide training this summer):  That is true! (CLAP CLAP CLAP.)

Some kids grouped themselves into letters in order.  A, B, C, D, E

Some kids grouped themselves into capital and lowercase matches:  Gg

Some kids grouped themselves into an addition problem:  4 plus 3  equals 7

The next day when I brought out the cards, I told the kids they had to group themselves into letters, numbers, words, and sentences.  We had another great discussion because of the letters a and I.  Are they letters?  Are they words?  It was AWESOME

Now we can use these cards in a center! 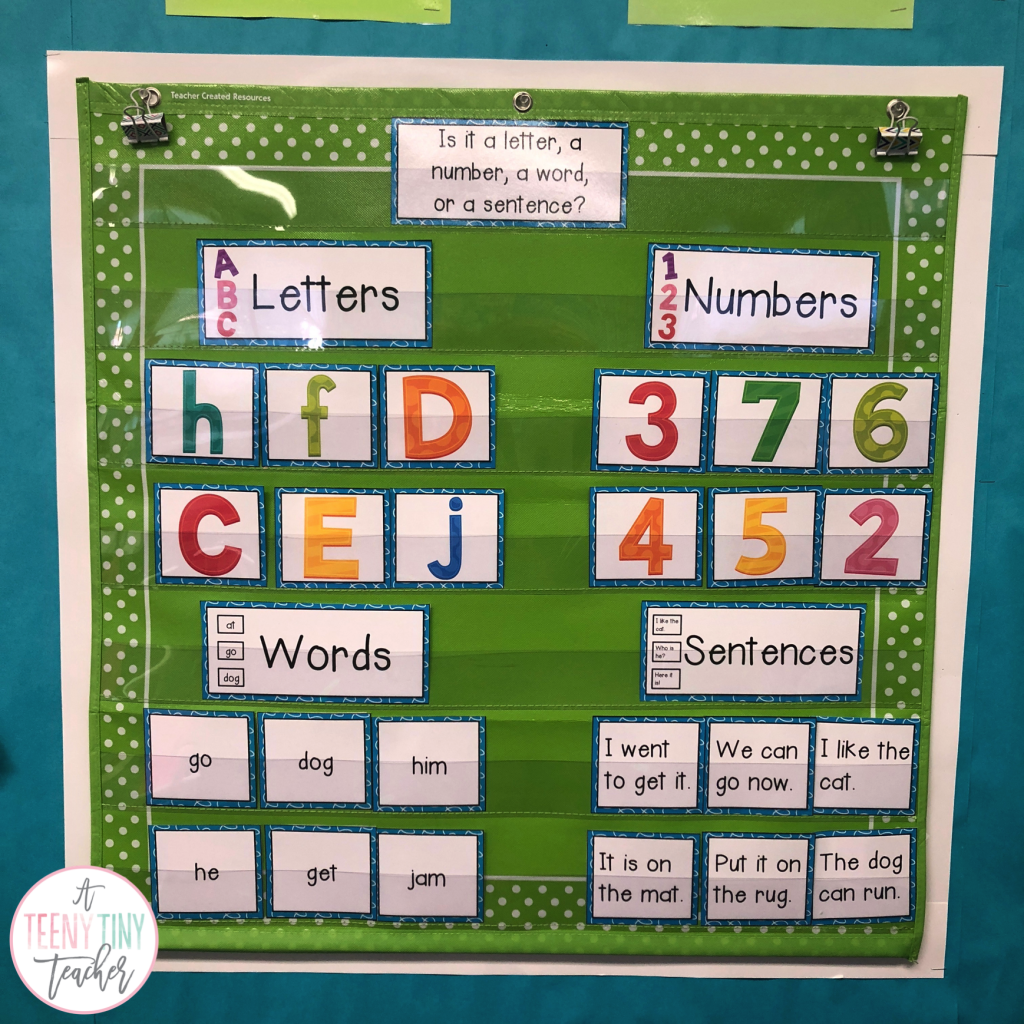 Another day, on the fly, meaning I had five minutes to kill and didn’t want to start anything new, and I couldn’t take my kids out early to recess because the upper graders were out there, we played a different game with the cards.

And then, when the kids were NOT looking, and had no clue what I was doing, I hid a tiny piece of a yellow sticky-note behind one of the cards.

I told my kids I hid a tiny piece of paper behind ONE OF THE CARDS and they would have to guess which card it was hiding behind.

I pulled a stick and asked that kid to guess the card.  When he said B, I said before I move the card so we can check, is B a letter, number, word, or a sentence?

See what I did there?  He had to distinguish between letters, numbers, words, and sentences, the class got to hear it again, and also think about it themselves, and fun was had by all.

THIS WAS A HUGE HIT.

They have asked to play every single day.

I didn’t hide any piece of anything and they couldn’t find the card TO SAVE THEIR LIVES because nothing was hiding.

Oh the joy I had when I told them that nothing was hiding.

Unless you count yesterday when a student asked me to help him sound out the word baseball and I said what letter sound do you hear at the beginning, let’s start there, and he replied you cheated on that game, you’re a cheater, I can’t believe it, my teacher is a cheater!