Anywho, if you have the same Transportation standard as we do, these books are GREAT for comparing and contrasting vehicles from long ago to today.  You can check them out {HERE}.  I took the liberty of taking some pictures.  I don’t know about you, but I need a visual.  And Amazon’s website says “no image available”.  That right there can be a deal breaker for me.  How hard is it to take a picture of a book (or eight)?  Surely there is someone in the office, warehouse, parking structure, or bathroom that has a phone camera and can snap a picture.  I’ve never actually been to the Amazon building (is there more than one?) but I picture it as a huge  warehouse filled with books.   Obviously, I don’t know how this works and just to be clear, I’m not asking, either.  I think someone somewhere could take a picture of a book.  I’m just saying.  And I believe it with such conviction that I did the job myself.  Uh huh.  Amazon can thank me later.  🙂 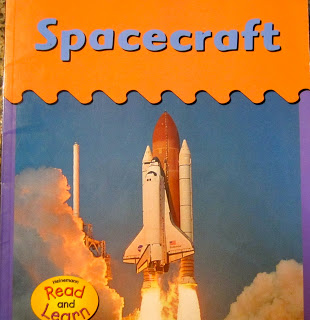 (front cover of the Spacecraft book) 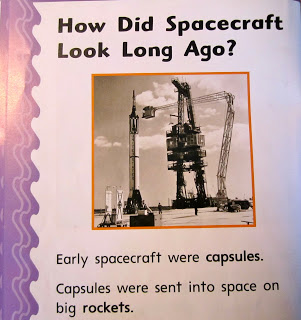 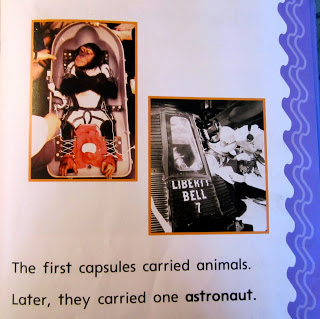 (the chimp picture that prompted the “homeless people” question)

Take a look at that chimp.  His arms are crossed and he is clearly looking at the human on the left (see the hand?).  My first thought was that he’s thinking, “Bring it on!  Let’s go!  To infinity and beyond!”  But when I look more closely, I think maybe it’s more like, “Nope.  You people are crazy.  There’s no way I’m doing this.  Uh Uh.  You must be outside your mind!”  Poor chimp.  On a whole ‘nother note, you’ll notice the capsule on the right says Liberty Bell.  My class totally made the connection from the our American Symbols unit.  I was unable to read ONE word on this page as the class erupted and I lost all control, as well as my hearing.

All right, I’m off to see Rachel Zoe have her baby.  Did anyone catch the Beverly Hills Housewives last night?  Holy cow!!!  The drama!  I think Kyle and Kim can be so mean!  I don’t really understand the Brandi girl but I don’t think they needed to hide her crutches.  That’s just dangerous, don’t you think?

« From Here to There
Favorite Read Aloud Linky Party »