We will FOR SURE be starting school on Monday.  I still cannot believe that my school (and practically half of our school district) postponed the start date due to the Holy Jim Fire.

As of today, the fire is 85% contained and all evacuations have been lifted.  Praise the Lord!  Our school district sent out cleaning crews to clean up all of the ash and prep everything for Monday.  My school looks brand new!  🙂

Obviously, the circumstances were awful and affected so many people, but having these five extra “prep” days has been a major blessing.  I have never been more prepared for school to start than I am right now!  I’m physically, emotionally, and organizationally prepared in every way!!  BRING IT ON!

In light of all of that,  I took last Friday OFF which added to the stress of everything, but I didn’t want to sound like a nincompoop so I didn’t say anything about it!

BUT HERE’S WHAT I DID LAST FRIDAY: 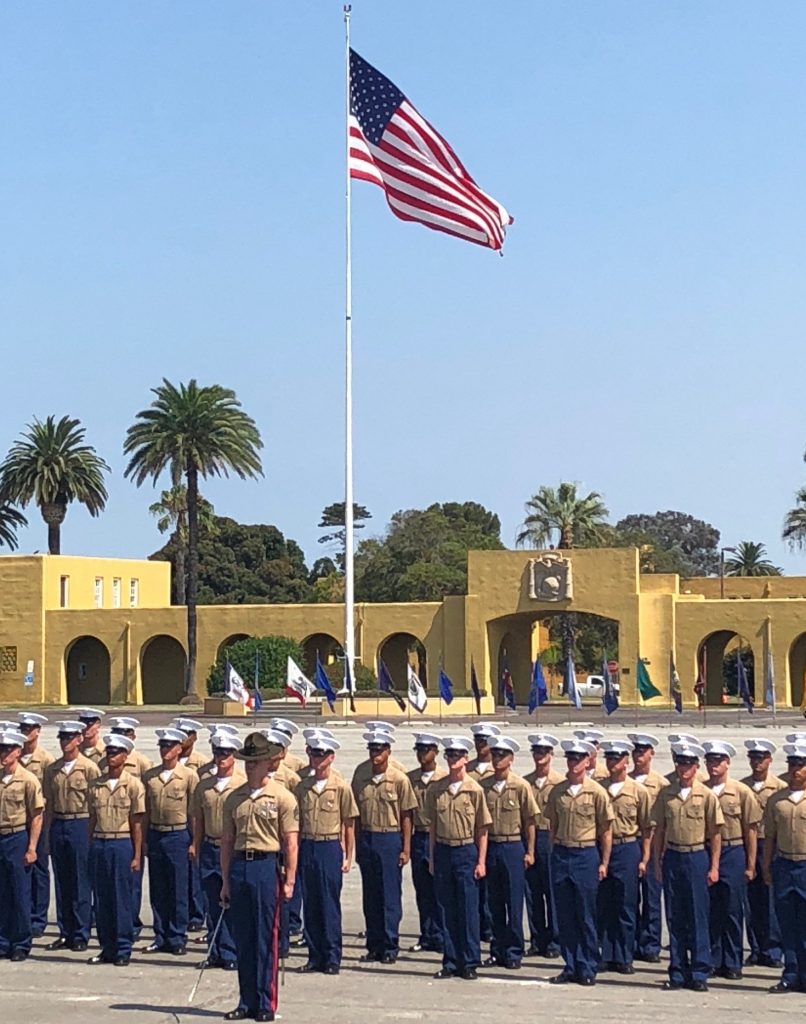 Or, actually, here’s what my NEPHEW, Jake, did last Friday!  I was just there for support.  🙂

I don’t know the official way to say it except to say that he is now officially a Marine. 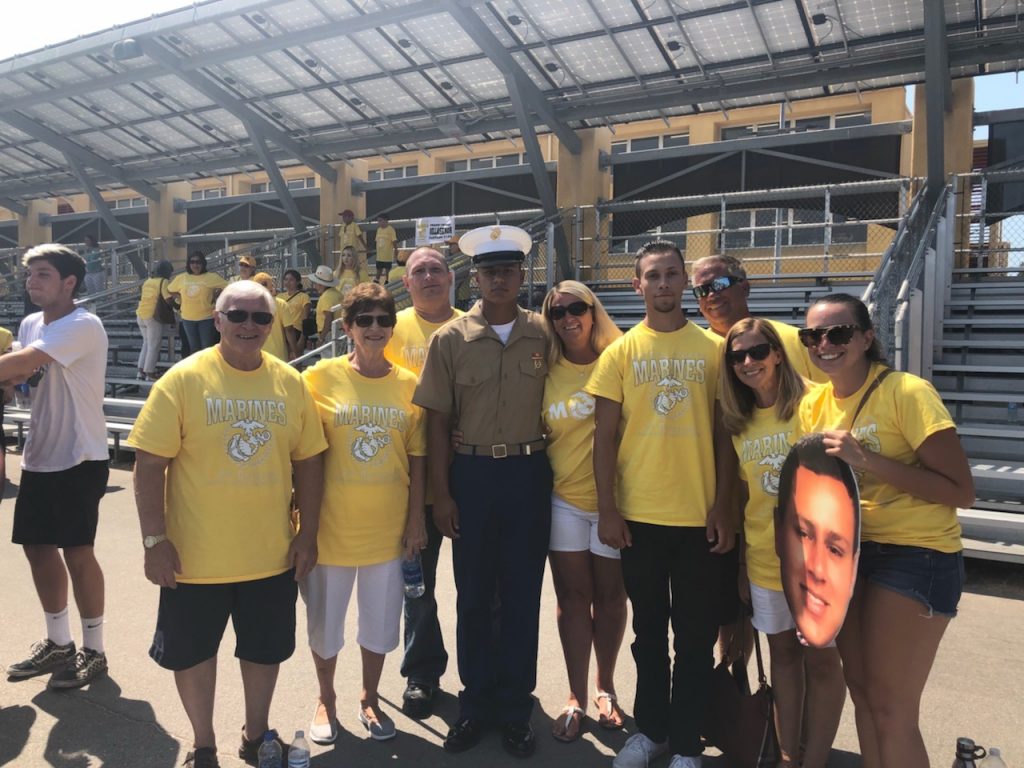 This was his platoon or his company or his what-have-you situation, and we didn’t have a choice. Later, I told him I wouldn’t have minded something blue or white or green, or even red.  But hey, at least it wasn’t orange.  😉

The Fat-Head though (see his big ole face that my niece, Ashley, is holding?) was ALL US.  HA! 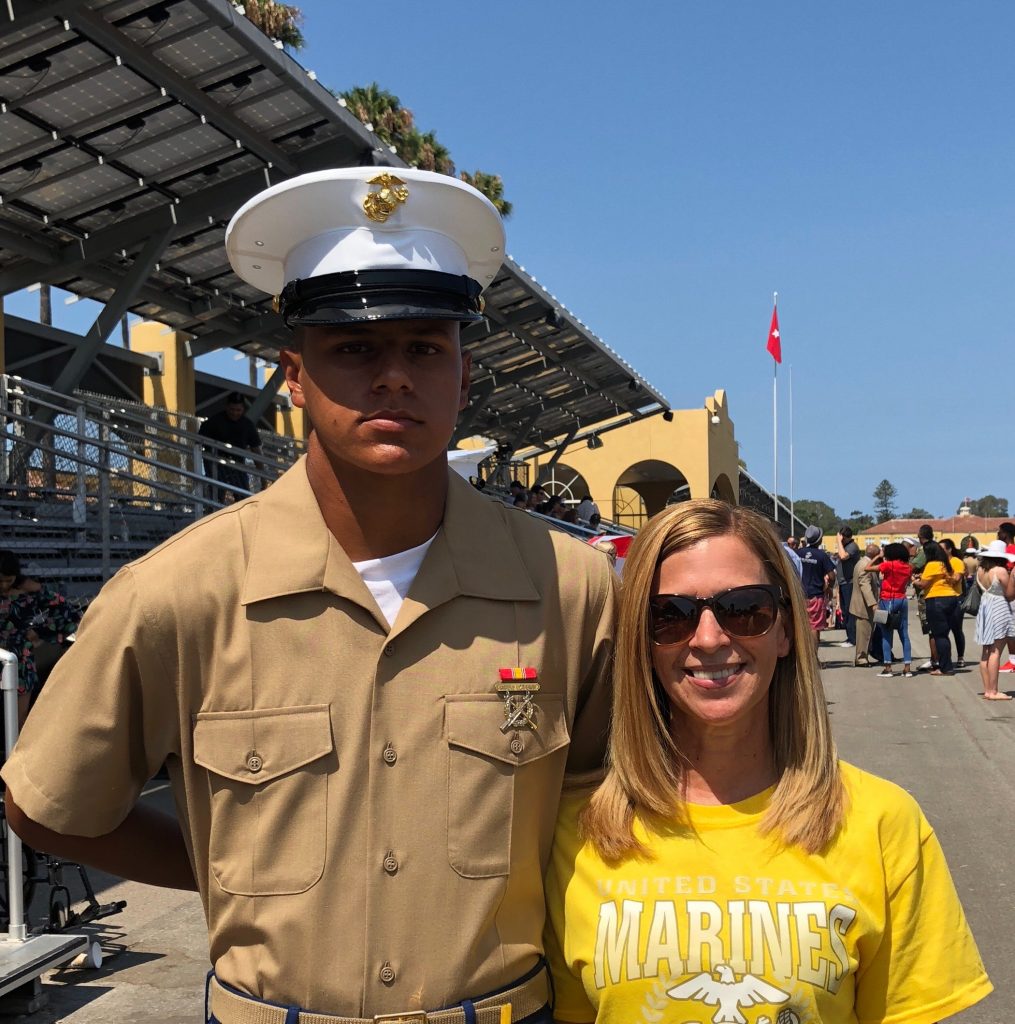 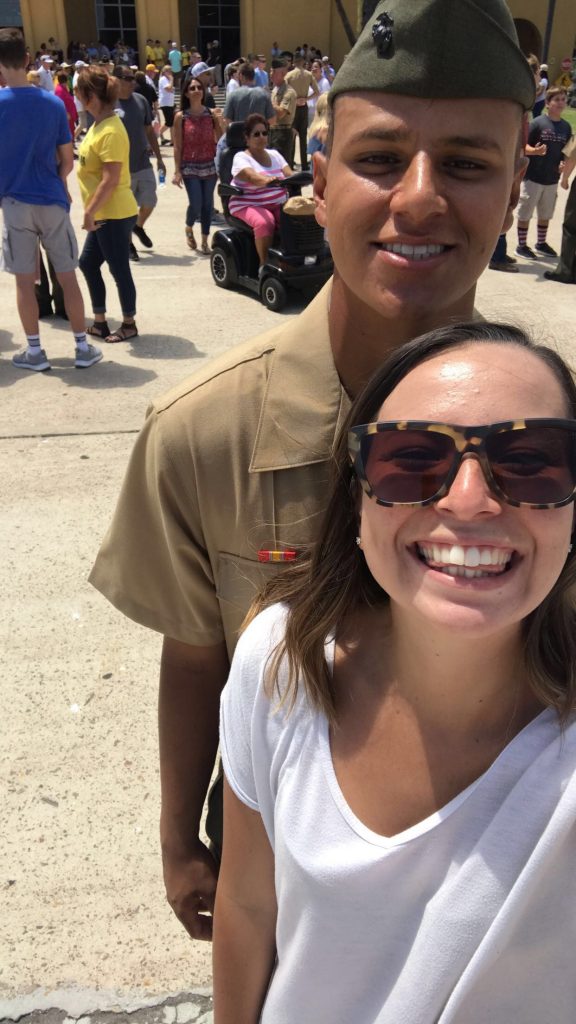 Jake is currently on ten days leave before he heads back to Camp Pendleton.  Or maybe it’s San Diego???  Or Pendleton IN San Diego?  I swear, I DO listen, but there has been a lot of information as of late, and usually my whole family talks over one another, and we’re loud, and I am easily distracted, and so there you go.

After his graduation, we went to BJ’s for lunch (his choice) and I made sure to sit right exactly next to him so I could ASK ALL THE QUESTIONS.

He was a living doll and answered everything.   I think, one time, he may have called me Sir, but hey, that’s okay.

What I mean by that is that while we’re loud and talk over one another and try to be heard, Jake is quiet.  Quiet-er.  Mellow.  Easy going.

He said when he was marching, he got in trouble for singing.

He sang that song by Vanessa Carlton . . . Making my way downtown, walking fast, faces pass, and I’m homebound while marching or hiking once or twice, and he said the drill instructor laughed in the beginning, but then he had to get down and do push-ups.

Singing while marching and hiking and living through The Crucible (it’s no joke, you should look it up) is our Jake.

I just prayed every day for him, that he would have energy and strength, and that he would be the one to encourage others to keep going.  It seems that’s exactly what he did!

Jake said one time he spit on the ground, and was told to pick it up.

He had to pick up his spit!

He put it in his pocket!

Because Jake tends to be a quieter sort of fellow, he was told that he needed to yell louder when he was replying or chanting or whatever it was he was supposed to be doing at a loud volume.  Now, for me, this would not be a problem at all.  In fact, I’m always being told to shush in one way or another, whether it’s from Steve or my parents.  We’re right here, Kristin, we can hear you, Kristin, why are you yelling?

I’m not yelling.  This is just my voice.  You know that teaching tip where they tell you to speak really quietly so your students will be super quiet and have to lean in to hear you?  Um . . . no.  That doesn’t work for me at all.  Nope.

Jake was made to get down into a plank and yell bloody murder until he coughed up blood.  FOR REAL.  That was the entire point of the exercise.  They wanted him to yell louder so instead, they just ruined his vocal chords and voice box and what else may have bled.

Sure.  Makes complete and total sense.

SAID NO ONE EVER.

Another time, the instructors pulled everything out of their foot lockers in the barracks, made their beds a mess, kicked everything around, and then said something along the lines of Put all of this back, you’ve got five minutes!

When they went to the mess hall to eat, they had to look down and there was NO TALKING ALLOWED.

Jake said the food didn’t taste that bad, but there wasn’t enough of it, and he was always hungry.  But my family says he’s always hungry so that’s nothing new.  😉

He lost 22 pounds!!!  He wasn’t even big to begin with – it’s just now turned into Jake being all trim and muscle-y and what-have-you.

Sixty-something  guys started out with him in his platoon and only forty-something finished.  RIGHT?!

He will return on Tuesday for combat training, and then from there, he is off to Missouri to learn his skill or his trade or his speciality thing.

So in the midst of back to school prep and the Holy Jim fire, I got to go watch my nephew graduate from the Marine Corp Boot Camp.  It was AMAZING and super special, and I feel bad that I didn’t even mention it last weekend!!!

This weekend, I am RESTING!!!

PS If you commented on my Back To School Anxiety post, I have been praying for you BY NAME, and will continue to do so.  If you need prayer as you head back to school, or because you’ve already started school and feel overwhelmed, please feel free to email me at ateenytinyteacher@yahoo.com.  I would love to pray for you!  Thank YOU for all the prayers – they were felt and heard and so appreciated!