I had a plan.
The plan was to share a journal entry from my younger years each week.
That was the plan.  Whether it was embarrassing or not, I was going to share.
However, that plan only works if I can actually find the journals that I’m looking for.  And I haven’t found them.  I have found mismatched pieces of stuff and glimpses into my younger years, but none of my actual journals that have a date at the top with all of the following pages in chronological order.
And while I am a Throw Away-er type of person, I would not have thrown away my journals because I remember thinking that they might help me write The Great American Novel someday.
Imagine.
So.
Tonight’s journal entry is not from a journal.  It’s from a spiral notebook that a friend and I would pass back and forth.  We wrote notes in it to each other.  We had several of these and when I moved away, we split them up.  As far as I know, everyone did this.  Did you?
I won’t share her notes to me — I don’t have permission and anyway, you don’t know her. 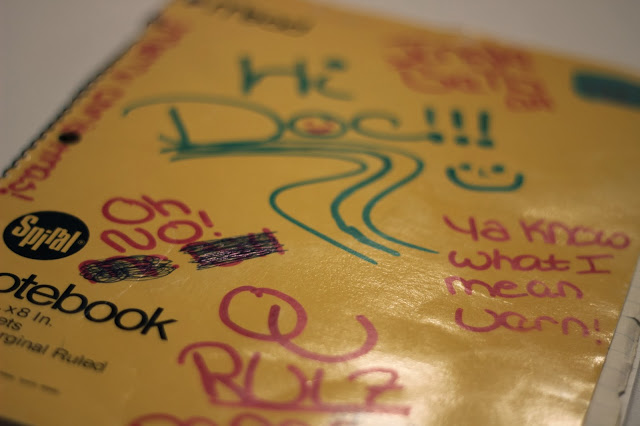 She called me Doc and I called her Plumber.  I don’t remember why.  We had a ton of nicknames for each other, as well as anyone we were in love with.  There is a code at the beginning of the notebook that I cannot crack. 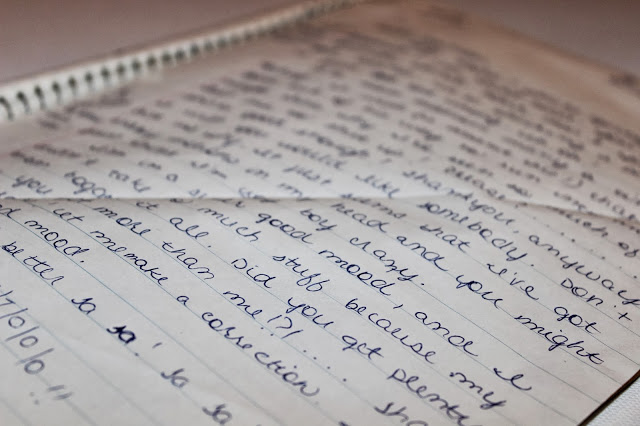 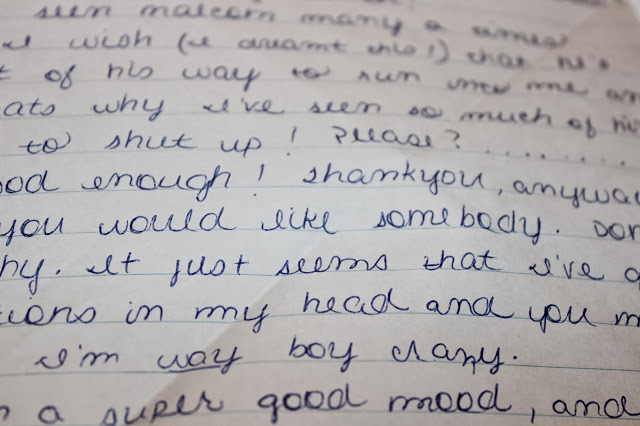 Here’s what the note says in its entirety.  I thought I’d type it so you can actually read it.
Dear Plumber,
Hey there!  What’s going on in Spanish?  It’s third hour.  You do have Spanish third hour, don’t ya?!  I’ve got Science.  We’re checking a paper.  Wow!  I just got one wrong.  Uh oh!
I’ve seen Malcolm many a times today.  I wish (I dreamt this!) that he’s gone out of his way to run into me and maybe that’s why I’ve seen so much of him.  Tell me to shut up!  Please?  . . . . That’s good enough!  Thank you, anyway!  I wish you would like somebody.  Don’t ask me why.  It just seems that I’ve got crazy notions in my head and you might just think I’m way boy crazy.
I’m in a super good mood, and I didn’t take to much stuff because my mom hogged it all.  Did you get plenty?  . . . You got more than me!?! . . . That’s not fair!  Let me make a correction.  I was in a good mood.
Well, I’d better Ta Ta!  Ta Ta!
W/B/A/F/T/O/O/O!!!
Love ya,
Doc
Who can decipher W/B/A/F/T/O/O/O??
I know it’s Write Back And . . . that’s all I’ve got.
As far as me being boy crazy?  Yes.  Way way way way boy crazy.
Malcolm was actually a boy named Mike with a last name that began with Mc . . . which is how we came up with the code name Malcolm.  I do remember that.
I have no clue what my mom took or didn’t give me or why I didn’t have too (to) much?  Pancakes?  Candy?  Donuts?  Any of those were always available at my house growing up.  If my mom made cookies, the rule was you could only take four.
At a time.
AT A TIME!
So then you ate those four and you could go back and get four more.  I’m not kidding.
That was the rule.  Only four AT A TIME, thankyouverymuch.
So.
There you go.
I am still on the hunt for my journals.  Everyone, keep your fingers crossed.
In the meantime, enjoy the first stanza of a poem I found . . . I must have just been broken up with because this is heartbreak at its best, people:
Too close to the fire
And I got burned
It’s my own fault
I’ll never learn.
Good grief.
This poem has SEVEN stanzas.  I should probably have stuck to my mom’s cookie rule.  FOUR would have been fine, I’m sure.
🙂
« Catch Up
Holidays Around the World (my way) »