Hey there!  I would like to say that I have not left the house today and I am not ashamed.

Hello, my name is Kristin and I am still in my pajamas.

I have really been enjoying my day.  And the hubby brought me Taco Bell.  Because besides being a pajamaholic, I am a sick individual, as well, with a tendency to eat fast food when I am too lazy to go grocery shopping and/or order a pizza.  Which, I’ll have you know, is not fast food.  Pizza is cooked in an actual oven, I’m told.  And the pizza people deliver whereas McDonald’s does not.

Meanwhile, in the land of the living, a sweet blogger, Kimberley, wrote the nicest post ever and gave me a heads up about it.

Guess what?  It’s about me.  What in the world?  You can click {HERE} to read it, but I want you to know that I didn’t pay her to write it.  Really.  Scout’s honor.

Also, while I’ve been hibernating, my twin, Kerry, has been out and about in her town of Texas and GUESS WHO SHE MET?!

She met Shae!  As in, Sean The Bachelor’s SISTER.  THAT SHAE!  AND she was there with Sheaffer who I read religiously and who got me to get some leggings, also known as MY MOST FAVORITE PANTS IN ALL THE WORLD!  But Sheaffer will tell you that if you are wearing leggings, you need to cover your crotchal area.  Yep.  I said it.  But Sheaffer said it first.

I have always felt as if Shae, Sheaffer, Kerry, and I could be besties!

Last, Murphie is recovering from her surgery like nobody’s business.  In fact, about two hours after arriving home and taking a nap, she felt as if it was time to play ball and go for a ten mile run.

Yep.  She was back to her old self.

Now, that posed a problem due to the whole no running, jumping, or playing for FOURTEEN DAYS.  Also known around here as THE NEXT TWO WEEKS ARE GOING TO BE THE WORST EVER AND HOW ARE WE GOING TO DO THIS?

We did our best on Monday night to keep her calm (ha!) and then as soon as the vet opened up on Tuesday we politely asked for some hard narcotic drugs.

They seemed to understand what we needed and now Murphie is taking something that makes her calm.  It literally says that on the bottle.  “Take one pill every 8 hours to keep dog calm.”

We have a Patooey situation again.  Murphie does not like to take her pills.  With anything.  We tried treats, hot dogs, cheese, deli chicken, crumb cake (I made that!) and peanut butter.

And then I had a GENIUS idea.

She will eat anything with ice cream.

I knew she belonged here with me.

And, by the way, it is her BIRTHDAY TODAY!  She is one! 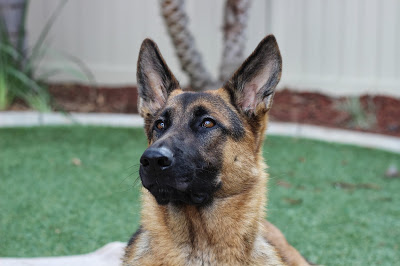 I took this picture outside today while we were being calm
on a blanket.  Yes, I was being calm, too.
It wasn’t until later that I realized the palm tree in the background makes it appear as if Murphie has antlers.
What in the world is wrong my photography shoots?  Seriously?
In honor of Murphie’s birthday, I am having a little giveaway over on my Facebook page.  Go enter {HERE}.
Alright.  Happy Thanksgiving Eve!
« My Murphie (and Winners Announced)
Early Bird Catches the Worm »