Happy Friday!  I can’t believe how many people have entered my giveaway.  Wow.  It’s incredible.  OMT!  Thank you!!

So I have a little diddy.  About my super cute pup, Sydney. 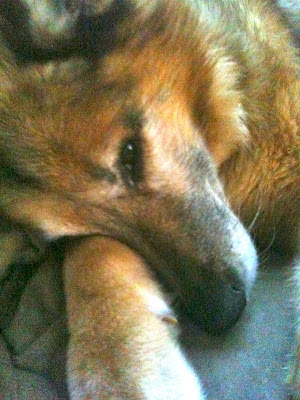 I know.
So.  This little thing will be 13 in September.  At times, she defines why they call female dogs what they call female dogs.  If you catch my drift.  If you’re picking up what I’m putting down.  In other words, she can LITERALLY be a female dog.
For example, when we had Foster, too, she used to trick him.  We would buy each of them a bone, but for whatever reason, they always wanted the same one.  Foster was really good at getting the bones started.  He had a knack for it.  Sydney did not.  So that little stinker would go to the back door as if she needed to be let out.  We would open the door which would cause Foster to immediately drop the bone (Outside?  Outside?!  Yes!  Yes!  Pant, pant!) and he’d run outside.  Meanwhile, Sydney would NOT go outside and just go pick up the bone.  La-di-dah.  So there.  I may have called her a FEMALE DOG, but I never said she was dumb.
Anywho, she’s been through a lot in her little life.  She tore her ACL and a meniscus and some other medical jargon that I do not care to look up the spelling for.
Exhibit A: 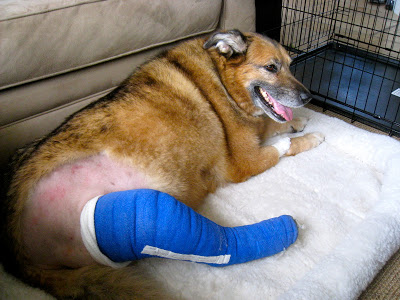 I know!
Then, she had bladder stones.  And all the medicine in all the world couldn’t fix them.  Or take them away.  Neither could a special diet.  So she had another surgery.  I’d show you a picture and call it Exhibit B, but I don’t have one.
THEN, she got a tumor.  In an unfortunate place.  Um.  Let’s see here.  How to say this . . . well, she got an an*l tumor.
NO!  I did not find it!  I wasn’t even looking for it!  The vet found it.  At a check up for something else entirely.  Sydney was not amused when he was supposed to be looking in her ears and he was someplace . . . else.
Surgery Number Three.  Exhibit C.  No picture necessary, I assume.
(Let’s not talk about the cost.  And maybe I should start selling a little more on TpT and just give them my vet’s Paypal account.)
So, for the last couple of years, we have taken a hands off approach.  No matter what’s wrong with Syd, she’s not going to the vet.  NOT HAPPENING.
But now.
She gets sores.  Weird looking scab things which causes the nearby hair to fall out.  So she has some bald spots.  Then they heal. And then another one crops up someplace else.  Repeat.  Someone told me it was a sign of cancer.  They didn’t hear my reply because they were busy on the floor being knocked out cold.  Yeah, that’s right.
Last week, she got a really big sore.  Bad.  So we broke down and took her in.  I’m rich, you know.
The vet thinks it’s a BACTERIAL INFECTION (you anti-dog, anti-animal, anti-human person who said it was a sign of cancer), and she is on two antibiotics three times a day for a couple of weeks.
Except these pills smell awful.  AWFUL.  Disgusting.  Sydney does NOT want to take them.  It wasn’t too bad in the beginning.  She’d take them with peanut butter.  But then a couple of days ago, she started eating the peanut butter and spitting out the pill.  Patooey.  Spit.  Smack lips.
This morning was a battle.  I got her to take one, but I couldn’t get her to take the other.  I tried treats, peanut butter, a hotdog, and a combination of all three.  Patooey.  Spit.  Smack lips.
I gave up.  I told the hubby I was getting on the treadmill and he could try.
About five minutes later, I’m walking to nowhere and watching The Real World (because I am a loser and have no shame) when Sydney comes running in.  RUNNING.  She’s almost thirteen.  At most, she walks sorta fast.  Sorta.  Just a bit.  But she was running like everything at the Dollar Store was on sale for a nickel.
Hubby was right behind her.
And the next thing I know, Syd’s on the treadmill with me.
No joke.
And then she just slid right off the back of it like in those commercials.  Whoosh.  Whoooooooosh.
And then she was off the treadmill.
I think I said, “Help her!” or something like that while trying to turn off the treadmill, and I think my hubby stood stock still for awhile.  It was all a little shocking, to say the least.
She’s fine.  No injuries.
I’m fine.  Thanks for asking.
Suffice it to say she did not take her antibiotic when the hubs tried.  Which got her in trouble because only one of us in this house has the I-Teach-First-Grade-Patience-Of-A-Saint.  So Sydney came running to me to save her.  You know, I AM a superhero.  I just don’t think she was expecting the treadmill to be actually ON.  I’ve been a little lazy lately.  Don’t judge.
So help.  Besides cheese, hotdogs, and peanut butter, what else can I disguise these stupid pills with???
« My Blog is a Year Old = Giveaway
Winners! And {an edited} freebie »