We have been in school for 8 weeks now.  I had to look that up and then count three times to make sure that was actually right because I just couldn’t believe it.

It explains why I needed to get something out of my bag of tricks to shake things up in regards to the whole the honeymoon is over and some of my kids are a just a wee bit too comfortable.


So it was time for The Magnets.  I’ve used these number magnets in a variety of ways, and I’m sure I’ve blogged about them before because it feels as if I have, but here we go again, just to be on the safe side. 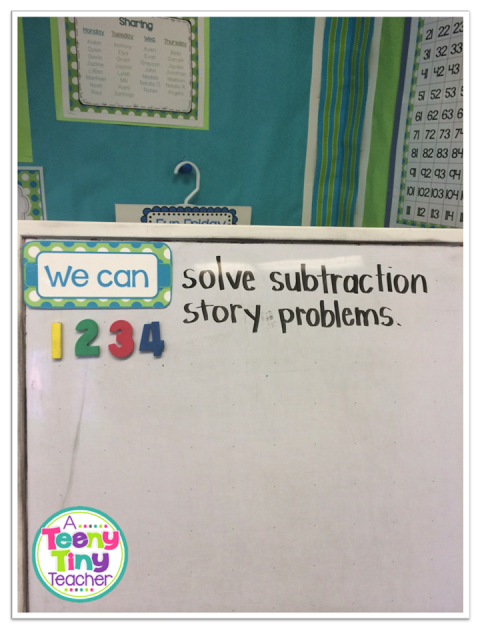 I put 4 number magnets on my easel when we are on the carpet and I’m teaching.  On this particular day, we were solving subtraction story problems, but that’s neither here nor there.
While I’m teaching, if there is a behavior on the carpet that is . . . um . . . let’s say undesirable, such as . . . someone whispers to another student or someone interrupts me or someone ties their shoelaces together and then tries to get up off the carpet and falls over because her shoelaces are tied together (this actually happened to my teammate during an observation) or any number of other things that can happen during a seven minute mini lesson because you read somewhere that first graders shouldn’t be on the carpet past seven minutes and you try really hard to be exciting and engaging and why are two kids picking at their scabs or their nose when I am standing on my head?

Well . . . if any of that happens, I just quietly take down the number four magnet.
And then I just keep teaching.
Meanwhile, the kids sit up a little bit straighter and look at me as if to say It wasn’t me, Mrs. Oldham, I am listening very intently and laughing hysterically at everything you say because you are a royal crack up.

If another undesirable behavior occurs, I take down the number three magnet.
This generally makes the kids look to the students on the right or left of them with a bit of a glare or a stare or a Cut it out right now, sit up and listen, you are missing the best part, Mrs. Oldham is about to make a funny face and actually stand on her head!

If we have two magnets left (number one and number two), then we get two letters in our You Must Be A Good Listener On The Carpet Or Mrs. Oldham Will Lose Her Mind For Real This Time MYSTERY SURPRISE! 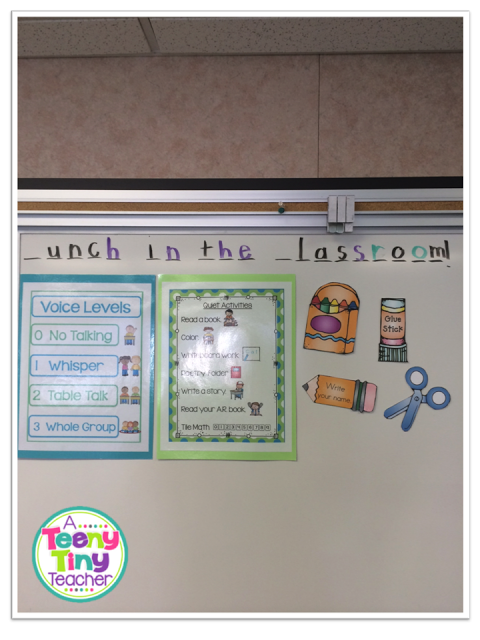 We are working towards Lunch in the Classroom (I’ll bring some dessert and we’ll probably have a dance party, but the kids are just going to eat the lunch that was packed for them from home, or eat the school lunch that they were planning to have, I am not providing lunch, just allowing them to eat in the classroom with me) and, as you can see, I’ve just filled in the letters randomly.  Once the kids figured out what it said, they thought they would get their reward right then and there but rest assured, I told them they had to earn every.single.letter.
Sometimes, I throw caution to the wind and give them a letter for lining up quietly.
I like to keep them guessing.
You could obviously only use three magnets or leaf magnets or velcro or rocks or pebbles or pom poms or whatever.  You’re the boss.  Sometimes, I don’t even put the magnets up on the easel if we’re only going to be on the carpet for a quick check or directions or whatever.  My kids will say Aren’t you going to put the numbers up? and I say Nah.

Because I’m the big boss.
I really really really want to do the cute Build a Jack-o-Lantern management system that you can read about on Miss Kindergarten’s blog.
However, I would need to build five jack-o-lanterns, or have a jack-o-lantern with sixteen eyes, and seven noses, and twelve teeth in order to make it last a little while.  Plus, I would have to go to Michael’s and buy the supplies and I’m not up for that at the moment.
After we earn Lunch in the Classroom, I’m going to start over and we’re going to earn Sit Anywhere On the Carpet You Want.  I’ve done this one before.  I only allow it for one day.
Because I’m the big boss.
😉
« Five for Fraturday
I Saw the Light »