Oops.  I was supposed to pick the three random winners for the Parts of Speech pack . . . but instead, I drank a glass of wine, had some cheese and crackers and salami and grapes for dinner, and watched an episode (or three) of Sons of Anarchy.  To be perfectly clear, I was against Sons of Anarchy from the beginning.  It just didn’t seem like a show I could watch.  Because I’m a girl and all that.  So the hubs watched all four seasons by himself while he was traveling and gallivanting all over the world this summer on super long flights.  And after lots of cajoling and arm twisting (his, not mine), I finally agreed to watch the first two episodes.
It was a really bad idea.  Now I’m hooked.  Even though parts of it are super gross.  But I love the idea of it.  And the story lines.  And I’ve always been partial to big, bad dudes with tattoos.  (My hubs is big, but not exactly bad.  As a matter of fact, he’s a rule follower so much that it can bug the heck out of me.  And he doesn’t even have one tattoo, but still.)  We’re trying to watch all four seasons before the new season comes back on in September.  So, people, I’m really busy around these here parts.  Obviously.
Winners of the Parts of Speech pack: 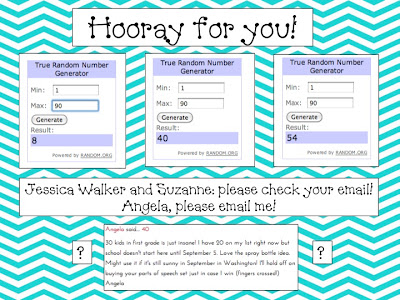 Thanks for being interested . . . I really appreciate it!  Jill, with the wasp sting:  I’m totally willing to give you a pack, too, because I have a wasp sting story, too . . . but I don’t have your email!
The Parts of Speech cards are still on sale.  🙂
Onto the FAQ.
I’ve had some recurring questions lately so I thought I’d take this opportunity to answer them.  The opportunity being that the hubby is busy figuring out if the Dodgers are going to get all those Red Sox players . . . and suggested we wait before we start the next episode.
1.  With all those kids (30 with 32 the max), do you have an aide?
Ha!  Hahahahahahahahahaha!  Ha!
No.
Crazy talk.
I used to work at a Title 1 school and I had an aide for an hour or so each day.  Francine.  She is wonderful.  We still keep in touch.  And she knows Fran from Kindergarten Crayons!  REALLY!
Now I have me, myself, and I.  I can have a student teacher almost every year if I wanted, but . . . I don’t.  I’ve had 2 1/2 in my entire 15 year career.  I have a hard time giving up control.  And I get jealous.  Like, awww, man, SHE gets to read that book to them.  Or SHE gets to make butter with my kids (which happened two years ago, and that’s all my kids could ever talk about no matter how many times I told them I bought the whipping cream, and that it was MY tupperware container,  and I planned the activity . . . my therapist and I are still working through that trauma).  It’s just really hard for me to have a student teacher.
I’ve also been known to hide certain books when I have a sub.  I want to read certain books.  I don’t want a sub to.  So the sub is usually left with . . . um . . . let’s see here . . . the sub usually gets to read . . . oh, I don’t know . . . a page out of the dictionary to my class.  Or something like that.
No aides.  Just me.
And parent volunteers – but that’s a whole ‘nother can of worms and I’ll save that for a different time.
And some of you commented that you have 34 students!!!!!!!!!!  Holy mack!
2.  How many recesses do you get?
Keep in mind I’m in California.  And we don’t have specials.
We get four.
There’s a ten minute one before school starts.  Except the kids aren’t exactly allowed to play.  They can walk around.  But the swings are closed, and the jungle gym is closed, and the grass is closed, and no balls are allowed.  They mainly stand there.  Or play with pretend balls.  Or they jump over their backpacks.  Or they play four square.  I’m not sure if they’re really allowed to play four square so I look the other way when I have that duty.
So let’s say we get three recesses.
Morning Recess for 15 minutes.  (We take turns being on the Duty Schedule.  You can read about that nightmare HERE.)
Lunch Recess – we get a duty free lunch.  It’s 45 minutes.  I know.  I know, I know, I know.  But we don’t have specials, and we have no money, and I can have up to 32 kids in my class.  Hiccup.
The kids eat for about 20 minutes and then noon supervisors watch them on the playground for the other 25 minutes.
Last Recess – 15 minutes in the afternoon (about an hour before dismissal) that noon supervisors cover for us.
So when I say “we got all our recesses today”, I mean my day was nicely broken up and the kids did not stay inside.  With me.  And ants in their pants.
3.  How tall are you?
For my newest readers:  I am 4 foot 11 inches.  It used to bother me, but I’m over it.  I can even take staff picture day now.  That used to bother me, too, but I’m over it.
On staff picture day, they make us line up from tallest to shortest.  So all of the talls argue and measure back to back against each other to see who is the tallest – it’s an honor.
And all of the smalls argue and measure back to back against each other to see who is the shortest – and it’s not an honor.  It’s embarrassing.  Every year, someone shouts, “Kristin, go to the back of the line!”  I’m not trying to sneak into the middle . . . I just had to say something quick to a friend is all.
Our staff has not changed in at least 4 years because of budget cuts and no new hires, etc.  But we STILL measure back to back against each other, and someone pats our hair down, and we have to take off our shoes because her flip flops have a half-inch foamy heel and that’s not fair . . .  STILL.
And every year, it’s the same.
I’m the shortest.
Even though I feel taller than a couple of the smalls.  But they’re five feet and five feet one, respectively, so I guess I’m wrong.
I’m told I’m proportionate which makes me look taller than I really am.
It’s the little things that hold a person together, you know.
4.  What is your favorite kind of pen?
I like a really old pen that I can’t find anymore.  It’s called a Uniball Vision.  I love the way it writes.  I used to have a set of them in different colors, but now I’m down to my last black one.  I take it back and forth from home to school with me.
If a Bic is cooperating, I’ll like it, too.  But I prefer a gel-like pen.  Inky.  But not gross inky.
That’s all, folks.  I can’t think of any other questions you’ve asked me recently.  I’m sure I’m missing a couple, but that just means I have an idea for another post in the future.
I leave you with a question . . . Do you like having student teachers?  Do you hide books or activities from subs?
« Parts of Speech
Clarification — Clearly »