I got a new student.

I lost a student last Friday.  Actually, I didn’t lose him so much as he up and left me for another school.  And I loved this kid.  He was sweet and nice and smart and a hard worker and a friend to everyone.  He was that kid.

I told him that his new teacher was going to get the little note that said It’s your lucky day!  You’re getting a new student! and that her shoulders would slump and she would be a tad bit overwhelmed getting everything ready for him and she would wonder if he was on grade level and if he was well behaved and if he would fit into her class without upsetting the apple cart (which led to a discussion of an apple cart).

And then I told him that once she met him, and got to know him a little bit, she would realize that she had hit the jackpot (which led to a discussion of the lottery).

I was a little teary eyed during this exchange, but he thought it was because I didn’t win the lottery.  But it was really because I was going to miss him.

So that was last Friday.

And then on Monday, I found out I was getting a new student.

And I felt all the things you feel when you hear you’re getting a new student.  In the middle of the year.  After you’ve trained your class and it runs like a machine.

After moping about it for all of an entire minute (or three), I got busy.

I pulled out my handy dandy ziplock bag filled with all the things a new student might need. 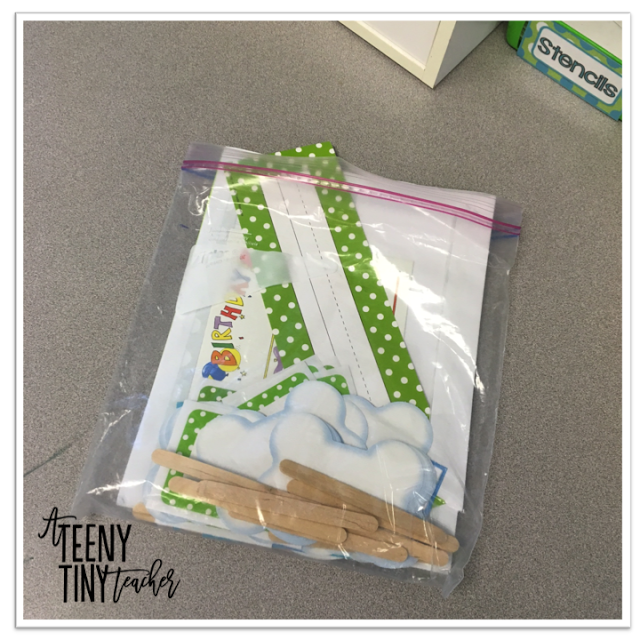 You’ve probably already seen this idea because I saw it somewhere and had to copy it as any good teacher would.  I don’t know who/what/where I saw it so I apologize for not giving credit.  I think a lot of people do it.  I changed mine a bit because I just keep extras of everything I fill out at the beginning of the year in one bag, rather than individual bags.  Call me lazy. 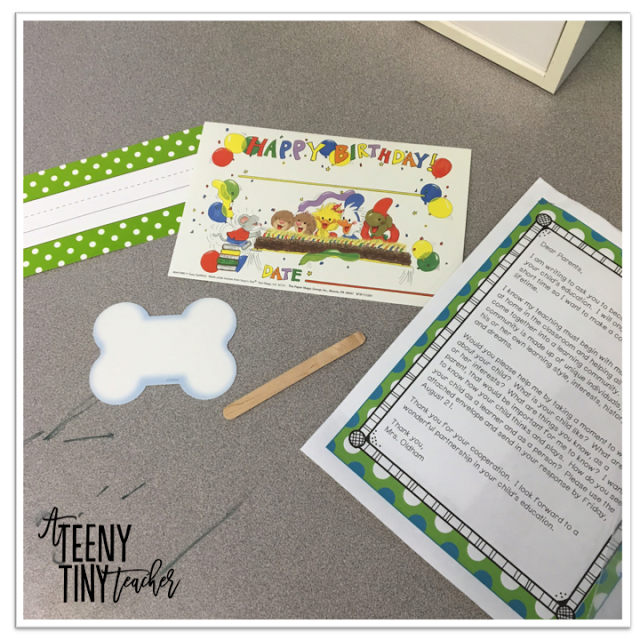 Some of the things in the bag are a name tag for the desk, a stick, a Teacher’s Pet bone, a birthday card (I fill those out ahead of time), and a letter to the parents just to name a few.

I wrote his name on everything (his name happens to be very unusual, but at least I can spell it correctly – remember that time when I spelled a student’s name wrong for more than half the school year?) so that he would feel like I was ready for him.

At least in the way of school supplies, if not emotionally.

Then I went home and I pulled up my handy dandy New Student file.  Because I am a nerd, and I have one.  Hello.  Nice to meet you.  My name is Kristin and I am a nerd.

And inside it, I keep a list of what I might need to print off at home. 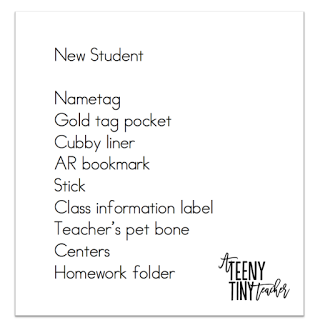 I’m telling you — I meet those parents and I look like I’m the winner of the Most Prepared Teacher in All the Land Contest, and then they know they can leave their little one with me because I will – just as surely as the day is long – return their child to them at the end of the day in one piece.
I’m happy to report that my New Student is adorable.  He hugged me when he met me!  It turns out he hugs everyone.  So we may have to have a discussion about that, but as for now, it’s cute.  At the end of the day, he hugged me and then reached up like he wanted to whisper something to me so I bent down and he didn’t want to whisper anything.
He kissed me on the cheek.
If that didn’t surprise the heck out of me, I don’t know what will.  I think I have a Valentine.  😉
This little guy came from Florida and FLORIDA TEACHERS ROCK!  He is on grade level and has his reading strategies down pat.  I was blown away and happily surprised.  And he can do place value like nobody’s business.  WOOHOO!
He had big shoes to fill, but he’s filling them in a-okay.
🙂
🙂
🙂
« Talk About It Tuesday
Five for Fraturday »