The first week is officially over (even though it was only three days, but it still counts) and I survived.  I am *still* loving my class and loving being back in the classroom.  This little (albeit, crowded with 30 kids) group of new first graders is all about every little thing I do.  If I read a story, they ask for another one.  If I sing a song, they want to do it again.  If I say it’s time to go home, they say, “Already?  Nooooo!”

I KNOW!!  Not one of them has cried.  I tend to have them in shock for most of the first day so they don’t know that they can cry (and probably should).  The second day is usually when I sink in.  This crazy lady is going to be their teacher.  Then school for the whole livelong day sinks in, too.  Dramatically. Which produces tears on their part and mine.

But not this year.

I also assigned them spots in line (number order because it really helps with all of the “She cut me!” and “I was first!” and pushing and shoving and kids stepping on my feet and THIS CLASS REMEMBERS WHERE THEY ARE SUPPOSED TO BE.  With the exception of two little ones who are really young, but everyone else helps them by pulling on their arms and yanking them back into place.  It’s a real love fest.

This is the best honeymoon ever.

Once upon a time, like three days ago, I took pictures of my kids on the first day of school in all of their glory.  And I was really proud of my idea because it was different from the frames that our kinder teachers do.  I wanted to switch it up a bit for the parents.

Then I posted that pic on my blog.

And then I received a couple of comments.

Apparently, my placement of the students made it seem as if a bear was giving birth to each kid as they held up their adorable flag banner announcing that they were in first grade. 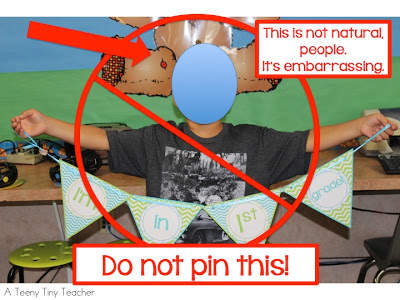 Did I notice this?  No.  Did my hubby notice when I showed how great the picture quality of his DSLR Whatchamacallit Fancy Camera That I Just Barely Know How To Use turned out?  No.
NO.  NO.  NO!
I was proud.  I was loud.  And I just slapped it up on a random blog post.
I reviewed all 30 pics.  With horror.
Every single one showed a first grader with a new mommy.
KILL ME NOW.
So.
I went to school on Friday and I re-took (is that even a word?) every single one.  Which gave me an opportunity to add polka dots and outline the font.  So there.
I lied and told the kids that the pictures turned out blurry.  And that we would now be taking our pictures in front of a blue background clear across the classroom, as far away as possible from the offending bear.  And I told them to pretend it was still the first day even though their hair was different and they weren’t wearing the same clothes.  It was fine.  It will be fine.  It was fine.  IT’S FINE, I keep telling myself. 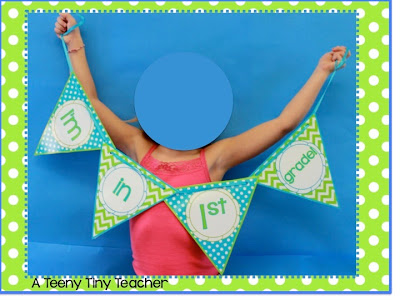 MUCH BETTER, right?  I have analyzed this picture and I have looked and looked and LOOKED for anything that might be out of place.  And I can’t find anything.
Phew.
That was a close one.  Except for all the pins of the other one.  Except that.
I also had someone ask me for the banner.  Which is fine with me. I wish I had time to offer different colors and different grade levels, but I barely have time to type this.  So, for now, it just comes in these colors with that saying and that’s all.  THAT’S ALL.  Obviously, I’m barely hanging on here.  Can’t you tell?
Click {HERE} to download.
And if you like the idea of the bear in the background, well, that’s not included.
Although mine might be available soon because I can’t stand to look at him anymore.
So there’s that.
*Polka dot and Chevron Papers from Dreamlike Magic.
*Frame from Tales from Outside the Classroom
*Font from Kimberly Geswein
« My Feet Hurt and I’m Tired
Let’s Talk About Me »