Well, my twin and her kiddos left yesterday.

They didn’t cry because the airport had a Ruby’s diner in it, and delicious shakes and malts picked them right up.  I know because she texted me and put a pic on Facebook.

I cried, but I don’t know if it’s because my family left or that I didn’t get a shake.

So now it’s just me.

I have three days left of my three week vacation and I’m planning on doing absolutely.nothing.at.all.don’t.even.ask.me.to.go.to.the.mailbox.

This post has nothing at all to do with teaching.  That’s what happens when you haven’t been teaching.

That’s going to change sooner than I would like . . . cry me a river right now, why don’t you?

I do have a plan in the works for updating my Fun Friday chart — so that will be something school-ish to tell you about if I ever get around to actually accomplishing something in the next three days and that’s sort of doubtful. 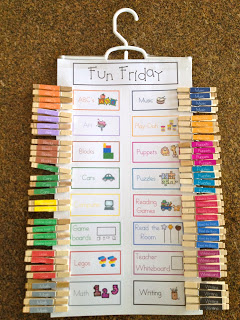 I have a plan in my brain that is going to change the looks of this thing.  That’s all.  Just a plan.  No materials.  Nothing printed.  Nothing created.   Just the plan, Stan.
In the meantime, I have to tell you what happened to me yesterday.
I got up and I went downstairs with Sydney to let her out.  She has doggy doors, as we all know, but she does not prefer to use them.  Instead, she waits until I’m all comfy cozy on the couch under a blanket, and then she goes to the back door and uses her nose to push the blinds hither and thither to communicate that she needs to go out.  Sometimes, it’s really polite with just a little nudge.
Other times, it’s quite rude and the blinds practically swing off the hinges.  WHOA, SYD!
Anywho, I opened the door to let her out and then I started making coffee.
After awhile, I was cold (I leave the door open because I am lazy and don’t want to have to stand outside with her) so I went to see what was taking her so long.  Not that I wanted to SEE, but you know what I mean.
And there, next to Syd, was ANOTHER DOG IN MY BACKYARD.  MY FENCED IN BACKYARD. 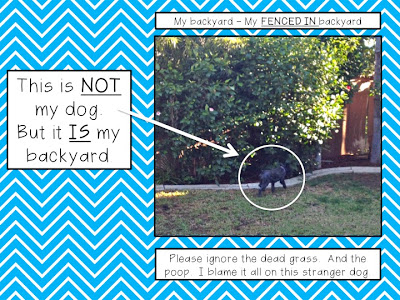 Sydney was ignoring the other dog.  The other dog was ignoring Sydney.  Sydney just continued to take care of her business.
I went to my side yard to see if our gate was open . . .
Nope.
I came back around and stared at the other dog . . . did it look familiar?
Tilted my head.
Do I know you?
Then I started laughing.  Hard.
I was dying laughing.
It was our neighbor’s dog, Puppi.  And she came in through this big ole broken slat in the fence. 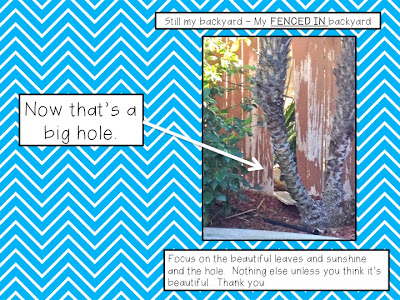 I guess it had been kind of windy the other day.  I think.
Puppi finally decided that I was weird and trotted off back through the fence.  And then she barked at me for all she was worth.
Meanwhile, Sydney had already gone back inside.  Shrugged her shoulders and all that.  Oh well.
I came in to tell Kerry, the twin, all about it and then we heard jingling outside.  When we looked out, Puppi was there again.  Just sniffing around.  Checking out her new digs.  Or old digs.  I have no idea how long this has been going on.  ??????
(That’s actually when I took the above pictures.  Contrary to what my parents and hubby might think, my iPhone is not permanently attached to my hand and I am able to be five feet away from it at certain times.  Six feet away and you’re pushing it, but still.)
All I can say is that this whole thing would have been even funnier if Puppi had used our doggy doors and come inside the house.
I mean, someone should be using those doggy doors besides me.
« Taste Test
Facebook! »