Happy Back To Normal It’s Like The Holidays Were Never Here.

I hope you had a nice New Year’s celebration and didn’t build it up too much in your head so that you were later disappointed.

That has never happened to me.

My twin and her kids spent New Year’s Eve with my parents.  They went to Olive Garden for dinner and then they went to see the movie “Parental Guidance”.  Yes, I wanted to go with them.  Badly.  That’s my kind of New Year’s Eve.

Instead, I made a commitment to go to my friend’s house and participate in a Hell’s Kitchen Blind Taste Test competition. 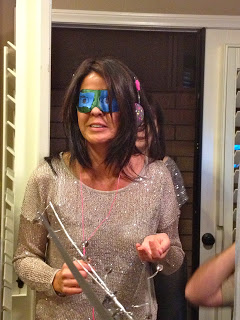 This is my friend.
And this whole thing was her idea.  So I feel justified in putting this picture out in Blogland.  Not to mention, you can’t really see her, what with the blindfold (which was a Zorro mask so we drew eyes onto duct tape in an Ellen fashion) and headphones.
I was very very very afraid to participate in this competition – mainly because I’m a picky eater.  And I like to win.  And I don’t like vegetables or weird food or fancy food or grown up food.  So I said there’s no freaking way I’m going first politely asked who was going first.
My friend and her hubby volunteered for the first round.  It was girls against guys.
They had to taste test five items (bite size portions).  They couldn’t see or hear a thing.
Here were their five items (determined by our self appointed judge, named Jeff, who wasn’t me because I didn’t know that was a job I could have had!):  Gummi bear, Snickers bar, white chocolate covered pretzel, cinnamon pita chip, and a Cheeto (I checked the spelling online and then when that didn’t look right, I checked on the actual bag in my pantry, and that’s how it’s spelled, FYI).
Again:  Gummi bear, Snickers, white chocolate covered pretzel, cinnamon pita chip, and a Cheeto.
Well, HOT DOG, I thought!  I can DO this competition!  Those five items are basically the five food groups in my diet!
So I pushed my friends out of the way, tore the blindfolds off their faces and the headphones off their ears volunteered my hubby and I to go second.
And, people, I got played.
Here were our five items:  cashew (I said almond), cantaloupe (I said pineapple), a craisin (I said raisin), mozzarella cheese (I said mozzarella cheese because I have eaten so much of that stuff that I could be wearing a blindfold, headphones, earplugs, winter coat, and be hanging upside down, and I would still get that right), and a raw potato.
A raw potato.
A RAW POTATO!
It wasn’t fried first or dipped into ranch dressing.  Nor baked and slathered in butter and cheddar cheese.  I almost didn’t recognize it.
Because it was RAW.
I might as well have been a contestant on Fear Factor or Survivor, and that raw potato might as well have been a scorpion or some disgusting part of an animal or bug or tree or plant that no one would ever-eat-ever for the way I carried on about it.
I did get it right, though.
Two out of five isn’t so bad, is it?
At least I survived with my life.  And taste buds still intact.  Barely.
The hubby got four out of five.  He missed the craisin.
There were 5 rounds (5 couples) and it was a tie.
So the first couple went one more time in a sudden death match.
And the guys won.
It was actually really fun and I laughed a lot.  But it will be a long time coming before I can look at a potato again.
Shudder.
I think I’m having post traumatic stress disorder.
I’m going to go lie down.  You talk amongst yourselves and let me know if you’ve ever done anything like this before.  And, let me warn you, having headphones on your head while eating does make you think a cantaloupe is a pineapple even if everyone around you tells you that you are crazy and how could you not get that?
« New Year’s Linky
Puppi »