I’m telling you – I am acting like a math guru or something lately.

And this isn’t typically me.
Typically, I’m all about the reading and the writing and the emotions and the singing silly songs about cheese on a string (which I made up and was quite hilarious if I do say so myself, and I’d write the lyrics down for you except I made it up so I can’t remember what they were) and the emotions.

And math – well, most of the time, it’s straight forward.  There are not a lot of ways to say two plus two is four.  But I do everything I can to say it in every way and make it in every way and eat it in every way.
And that’s what we did today.
We ate our math.
In fact, we were sharks.  And the goldfish never saw it coming. 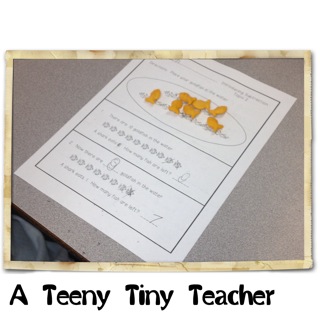 Now, this is not a new idea.  Nor am I claiming it as my idea.  What I am claiming is the fact that our previous Fidelity to the Core Keep To It And Don’t Deviate has lessened quite a bit due to the Common Core, and so I remembered that I used to teach this lesson to introduce subtraction and the concept of taking away, taking away, taking away, and now I have none left.
It was delicious. 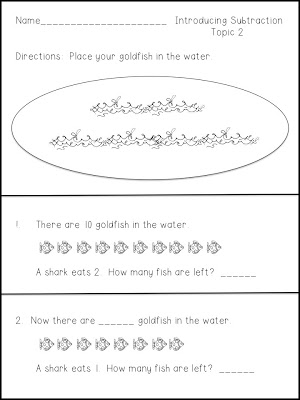 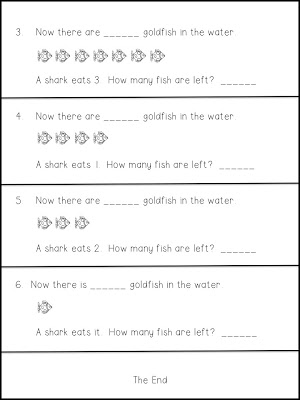 Click {HERE} to download.
You need to go buy your own goldfish because I keep eating all the left overs and there aren’t enough to share with you.  Each kid needs ten goldfish.  I had mine prepped beforehand with little dixie cups because I’m cute like that, don’t ya know.
My friend upped the rigor of this by having the kids write the number sentences each time.
I did not do that.  One, I didn’t know she was going to do that so I didn’t know to copy her.  Normally, I would copy her because she is an amazing math teacher.  Two, I really just wanted to expose them to the concept.  Three, number sentences show up on our math tomorrow on the ACTUAL CURRICULUM.  So there.
We also practiced crossing the fish off to show our work.
Now, here’s a tip for you.
I ran my copies back to back.  You know, I was being all environmentally responsible and saving a tree and not thinking everything through.  Clearly.
Because when we needed to turn our paper over, there went all the goldfish.  They just fell off.  All over the place.
So my kids were screaming, “My fish are outta water!  They’re dying!  They’re dying!”  Or “My goldfish fell on the ground.  Can I still eat them?”  And some others were yelling, “HAHAHAHAHA!” like it was the funniest thing on the planet.  No, I didn’t laugh the loudest.  Who told you that?
Next time, I will pass out the second page when we’re ready for it.  That way, the fish can stay in the water until the big, bad shark comes to eat them.
It was fun.  We had fun.  Math is fun!
Who knew?  😉
« Dice or Die
Plaques and Trophies and Cubes and Stuff »