Okay, SPOILER ALERT.  I’m going to talk about Big Brother because I have to.  So stop reading if you’re not caught up or skip ahead to the next paragraph if you’re not interested.  And, if you’re not interested, you should be.  Nothing else is on during the summer and this is on THREE NIGHTS A WEEK.  I mean, REALLY!  It’s a no brainer.
Yay, yay, yay, A BIG OLE BLINDSIDE for McRanda!  Woohoo!  I am thrilled.  Amanda’s tears about Elissa’s bullying were completely confusing to me.  I do not understand her and I truly think she needs to be evicted just so that she can get out of the house and 1) get some perspective and 2) buy a sweater that STAYS UP ON BOTH SHOULDERS.
Alright.  Oriental Trading sent me a $25 gift card for no reason.  I know.  I don’t understand it either.  But I gladly accepted it.  I bought a couple of things, among them some new foam dice.
The dice were bigger than I expected.  But it turned out to be a good thing! 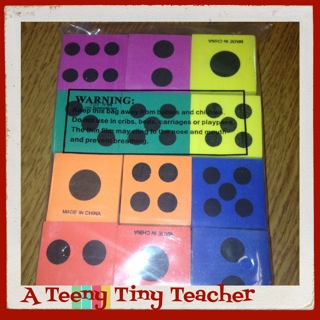 We’ve been studying part/part/whole in Math, as well as finding and recognizing number patterns so I used something I’ve used in the past, but in a totally different way.
I gave each student a dice and a Roll the Dice game I created years ago.  I’ve shared it before.  But just in case you didn’t grab it then or forgot about it or whatever, here it is again.  Click to download. 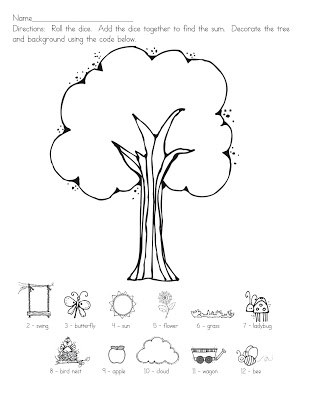 Click {HERE} to download.
Students worked in pairs.  I’m going to pretend here in Bloggy Land that when I said they could pick their own partners that everything went really well and there was a virtual love fest in our room, and no one’s feelings were hurt, and I did not, I repeat, I did NOT give out gold tags to make the process go a little smoother.  It was just magical.
Oh, and before I continue, I do not want to have a discussion about die versus dice.  I just don’t.  Let’s call one dice a dice.  Okay?  Throughout this post, one dice will be known as a dice from heretofore.  No one is going to die.  Or be called a die.  I do not care.  The End.
So Student A rolled her dice to get her part.  And then Student B rolled her dice to get her part.  And then both students had to put their parts together to get the WHOLE.  See?  And they recognized number patterns on the dice.  That is called Killing   Feeding Two Birds With One Dice.
The best part was that even my struggling learners were able to do this activity because the dice were big enough for them to touch the dots as they counted.  Oh, and the other best part?  The dice are foam.  You can’t hear them when they roll.
GENIUS.
Nap time. 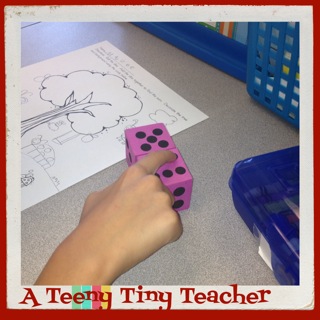 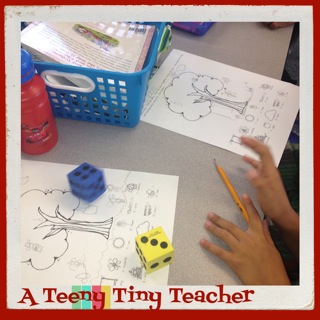 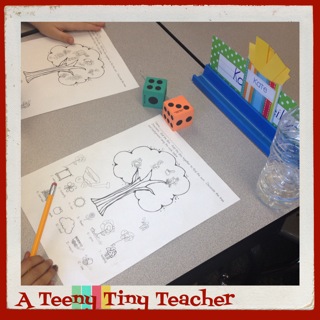 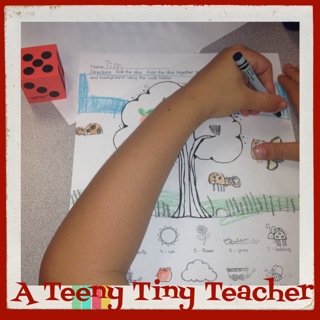 My kids loved this activity and asked if they could do it during Fun Friday.  So I patted myself on the back and said yeah, buddy.
This is out of nowhere, but when I was in elementary school, I came up with the perfect costume on my way to school.  Or, at least that’s how I remember it.  My mom might call me later and tell me I have it twisted.
Anywho, I ran home after school (because back then I’m positive I ran to and fro and occasionally had my nose out of a book) and told my parents that I wanted to be a DICE for Halloween!  So my dad helped me paint a cardboard box and then I wore black tights (I think) and walked around the neighborhood with two little arms sticking out the sides barely able to hold my Trick or Treat pillowcase in front of me because the dumb box was in the way.  Don’t ever wear a costume in which you are trapped inside of a cardboard box.  Especially if you are teeny tiny.  And especially if you are the teeniest tiniest kid in elementary school so that the one time you went boogie boarding at the beach on summer vacation, the wave carried you up onto the shore, across the sand, and back under the umbrella where your mom was relaxing in the shade because she can’t swim and also doesn’t want to damage her skin.
Really.  Don’t.
My parents later went as a PAIR of dice.  Or maybe they went like that before me and then I copied them???  I don’t know.  I seriously think I’m the one who came up with it first, thinking I could be a Rubik’s cube and then changing it to a dice.
If I lived closer to my mom and if I felt like leaving the house today (I don’t – shocker), I’d look for the picture of me as a dice and show it to you.
I also bought some dry erase sleeves.  Did you forget what we were talking about?  Was that an okay segue? 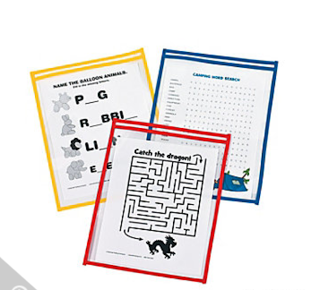 (source)
I haven’t had a chance to use these yet, but I know they’ll come in handy and help me save on copies.
If you’re interested in a giveaway, Oriental Trading Company is having a Spooktakular Giveaway right now.  Check it out {HERE}.
And there you have it.
I don’t have any big plans on the agenda for today.  And that, my friends, feels so good!  What are your plans?
This
review is based strictly on my opinion. Others may have a different opinion or
experience with the product listed above. I was provided the sample free of
charge by the company or PR agency and I provided my honest opinion. No other
type of compensation was received for this review.
« Five for Fraturday
Shark Week (freebie) »