Hooray!  It feels so good to be back on the blog — talking about it on Tuesday!

Ben arrived in Jamaica and talked a lot about doing romantic things whilst there.  Uh huh.  Way to start out strong.  Doing romantic things means only one thing in my book, Benny Boy.  And that’s Do Not Cry, Be Quiet, Pour Me a Glass of Wine, and Buy Me Chocolate.

He reviewed the three remaining girls for us in case we had forgotten who they were.

Then they showed the three girls in obligatory short silky robes drinking coffee on balconies and couches, and wearing sarongs while contemplating their relationships with Ben.  It all looked completely natural and not at all set up.

Ben’s first date was with Caila.  Ben still feels like it’s his deepest relationship.  They went on a little rafting trip down the river.

I was nervous at first, thinking how is rafting and rowing and trying not to fall out of a boat a date, but it really just meant that a Jamaican man took them down a very calm river in almost a gondola sort of way (except the Jamaican didn’t sing) while Ben and Caila had absolutely nothing to talk about.  At all.  It was awkward.  And quiet.  And weird.  ABC also played some horror-type of music which made it sound as if a scary doll was about to come alive and jump out at us.  I felt nervous and on edge.  I’m serious.  Did anyone else notice the music?  It wasn’t romantic, I’ll tell you that.

Ben described Caila as acting melancholy, reserved, and not being herself.  He was disappointed because if something was bothering her, he wanted her to communicate with him.  So they stopped for some jerk chicken and a coconut drink, and she talked about how she was overthinking things and Ben just pleaded with her to talk to him.

If only Steve wanted me to talk to him as much as I do the way Ben was pleading with Caila . . .

Going into dinner that night, Caila decided that she couldn’t live with regrets, she didn’t want to be reserved anymore, and she was going to tell him she loved him.

So then she spilled it.  She went on and on which Ben appeared to really like . . . and then she told him.  She said I’m in love with you and he kissed her and the music soared.  The music was much better at this point.  It was romantic comedy music so I approved.

Next was the Fantasy Suite Date Card and they decided to take advantage of it.  And you know how I feel about this.  All it means is that they went back to the room and put on their pjs and stayed up late talking.  Right?  No funny business, right?

In all actuality, they put on their swimsuits and watched fireworks, sat on a bed, kissed, and then they shut the door.

Because they were going to put on their pjs.

The next morning they woke up and Ben asked Caila if she always woke up like that because she looked amazing. 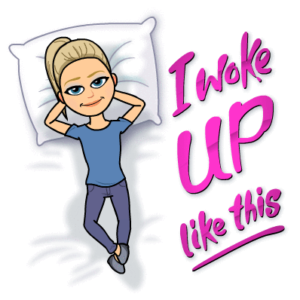 And then Ben left her.  I’m sure she was sad when he left, but all I kept thinking was now what?  Caila gets to lie around all day and read books and suntan and eat and drink and just relax?  Because I felt JEALOUS and I’m thinking it’s time for Spring Break.

Lauren’s day was next and she wore super short shorts.  Like the kind that you have to keep tugging down.  And Ben wore . . . well, I don’t really know about this pattern. 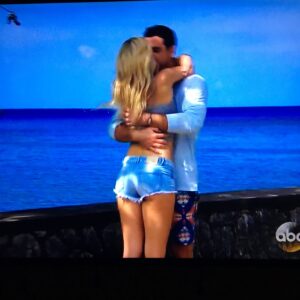 But look past Lauren’s tushy and look at the background – wow.  I either have a really good TV or Jamaica is just as beautiful as I remember.

Ben and Lauren got to go release baby sea turtles from a nest which was super cool and I totally want to hold one.  Like now.  They were adorable.  And they gave the little sea turtle babies a bath.  For real.  Just FYI, in case someone is taking notes, I would rather give baby sea turtles a bath rather than swim with a pig.  Any Day.  No contest.

Then the baby sea turtles headed towards the ocean and it was like they were beginning their life just as Lauren and Ben’s relationship was also beginning.  I didn’t come up with that correlation.  Lauren did.  Bleck.

Ben told Lauren that he cried in front of her sister and he told her she was too good for him.

Lauren said she felt the same way about Ben.

Later at dinner, Lauren told Ben that the week leading up to Jamaica was the hardest one thus far.  I mean, I get it.  Thou are deep.

She told Ben he was the man of her dreams.  But she couldn’t bring herself to tell him that she loved him.

Next was that fantasy suite date card.  She decided to accept because she wanted alone, uninterrupted time with Ben.  Once they were in the suite, she *finally* told him she was completely in love with him and that she had been wanting to tell him that for awhile now.

And Ben said I’ve known I’m in love with you for awhile, as well.

WHAT?!  WHAT?!  I knew he was going to say it because of the previews, but whoa.  The Bachelor isn’t supposed to say it when he has two other girls remaining.  Because now Lauren thinks she is IT.  Which is kind of sad because the previews also showed he says it to someone else!

Anyways, they woke up next to each other and he brought her breakfast.  And it was just . . . he was with Caila the night before.  And he was going to be with Jojo that night . . . and ew.  Just ew.  No.  Is he a polygamist?  Just saying.

I can only imagine them in their pjs having a slumber party.  Otherwise, I cannot watch this show for the pure yuckiness that is the Fantasy Suite THREE NIGHTS IN A ROW WITH THREE DIFFERENT GIRLS AND ALL THE WHILE, THE GIRLS KNOW ABOUT EACH OTHER.

After Ben left her, he said that telling Lauren he loved her just complicated things.  And that if he didn’t feel like he loved Jojo by the end of their date, he would have to send Jojo home.

Jojo wore some super short shorts, too, and then they took a helicopter to Negril to see some waterfalls.  And then I learned that a silk-looking swimsuit is waterproof.  Who knew?  I swear, this top looks kind of like the same material as the little robe she was wearing in the morning while contemplating her relationship with Ben. 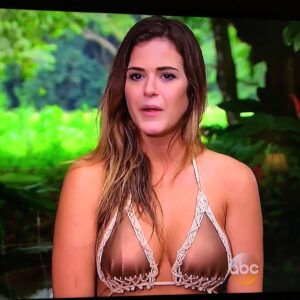 Then they took risks by jumping off the waterfalls and that translated into Jojo telling him that she loved him because it was terrifying.  But then BAM.

Ben said Jojo, I love you, too.  And she said what? at the same time I did.  At the same time everyone watching The Bachelor did.  WHAT?!  WHAT ARE YOU DOING?

So that night at dinner, Jojo was feeling extremely confident.

But Ben was in a state of shock because he just kept remembering that he told Lauren he loved her.

So Ben’s bright idea to handle this was . . . it was Jojo’s night.  So he wasn’t going to think about any decisions he needed to make in the future.

Anywho . . . they discussed Jojo’s brothers and whether or not they would support their relationship . . . and regardless of what conclusion they came to, I came to the conclusion that her brothers are going to kick his $$s.

They opened their fantasy suite date card and off they went.

The next morning, they woke up together . . .and had breakfast.

How can Ben do this three days in a row?  Really?  I swear, it’s like Sister Wives or Big Love all over again.

Ben told Jojo we are on the same page.

Three girls.  Three Fantasy Suites.  Three days in a row (according to the editing)

He decided he couldn’t move any further along with Caila.  But Caila . . . well . . . she missed him.  So she got a driver to take her to see him.  Because she was thinking that even though Ben didn’t tell her he loved her back, she could tell in his eyes that he loved her, too.

So she arrived at his gigantic place on the resort (seriously – it was like he had the entire resort to himself) and searched for him (it took her awhile) and SURPRISED HIM.

Ben was definitely caught by surprise and shocked.  But he knew he had to be honest and say goodbye to her.

Meanwhile, I was thinking — watch it, Ben.  Don’t accidentally say you love her, too.

Once Ben started talking, Caila figured it out pretty quick.

He said Its really hard to imagine saying goodbye to you.

She was trying not to cry.  But she was.

He walked her out and she told him that she really did love him.  And she got in the car.

But then she GOT OUT OF THE CAR.

No one has ever gotten out of the car.  Go Caila.

She asked him if he knew already . . . but then she couldn’t finish her thought and Ben just said well, everyone shared the same thing that you did.  Everyone loves me.  I’m so loved.

Alright, not exactly, but pretty much.

It wouldn’t have mattered what he said.  That’s the horrible thing about love.  You can love someone, but they might not love you back.  And that’s it.  That’s the deal.  That’s why break ups are so sad and hard.

And that’s why dating on a TV show is so much fun to watch.

Caila got in the car, stayed in the car, and cried very silently.  It was sad.  I was sad.

And then stupid Ben said I hope I didn’t make a mistake.

Then you’ll never guess what Ben did.

Okay, you guessed it.  He cried.

I’m thinking Caila will be the next bachelorette.  What do you think?

The next day, Harrison showed up and he asked Jojo how she felt about everything and, because Ben validated her feelings, she had zero doubts.  And she can’t imagine Ben feeling that way with anyone else.

Because, sure enough, Lauren felt confident, too!

You know they were both standing there, feeling superior, feeling sorry for the other one, thinking he loves me!  He told me!  You have no idea!

Obviously, Caila never showed up.  But Ben did.

He passed out the two roses left to the two girls left and that was it.

Turns out, both girls are a little worried that he might have told the other one he loved them, too.

Super excited for next week!  The Women Tell All!!!!!

Tell me what you’re thinking!  Who does he send away only to call her on the telephone and ask her to come back?!!!!!