So I went to a Bachelor Finale Viewing Party last night.

I was the only one who brought a laptop.  Go figure.

I felt stressed at the beginning because there were about ten girls and I was afraid I was going to want to pause it, rewind it, or even tell people to be quiet, I can’t hear, everyone STOP TALKING ALREADY, but I didn’t.

None of that happened.  I did get distracted a few times so I might be leaving out a few details.  Feel free to include them in a comment!  And this might be more of a bullet point recap . . . because that’s how I was taking my notes and I couldn’t fill in a lot of the nitty gritty.  You know.  Because there were snacks and drinks and people.  Usually, it’s just me in my bed and I can really concentrate.

I have to say . . . it was the most dramatic season finale ever!

And, for the first time in history, the bachelor told two women he loved them.

Harrison had a live audience and he introduced us to Ben’s pastor who was ready to marry Ben and the girl of his dreams just as fast as you can say rose.  It was kind of cheesy because the pastor didn’t fit in and he just kept reading his bible and not looking up into the cameras at all.

The episode started with Lauren and Jojo reflecting on how Ben told each of them that he loved them.  They both felt special.  And worried.

Ben just can’t help how he feels.  He was concerned about getting down on one knee and proposing to one girl when he was in love with another girl.  Uh, yeah, Ben.  I’d be concerned, too.

Ben got together with his parents and told them what he did — he’s in love with two women and HE TOLD EACH ONE.

Mom thought the whole thing was disturbing.  She had the best facial expressions.

Then Lauren got to meet his parents.

Lauren said that she had been wanting to meet his parents since their first date.  And gosh darn it, that was a long time!!!  It was EIGHT WHOLE WEEKS!

Then she met with mom. They talked about how both Lauren and Ben think the other is too good to be true.

Lauren said they haven’t had to face any difficulties.  I mean, I guess not.  Maybe dating another woman could classify as a difficulty, but apparently not.

Lauren told Ben that getting married was a BIG commitment and that she only wanted to do it once.  As opposed to twice or five times.

She brought a conch shell filled with flowers for Ben’s parents.  It was interesting.

She went in hard.  Full blown.  I love your son, he’s the best thing that has ever happened to me.  Ben said how comforting it was to be around Jojo.

Dad asked “why Ben?” and when Jojo replied, she got emotional and teared up, and Dad ate it all up with a spoon.

Mom appeared to really like Jojo.  Jojo got really emotional with Mom, too.  And Mom said, “Well, hon, I can tell right off the bat that Ben feels the same way.”

Jojo had the ability to know what it would take to make Ben feel safe.  Mom felt like the day was different and she seemed to be team Jojo.

Ben said he loved both girls very much the same.

VERY MUCH THE SAME.

WHAT IN THE GOOD DARN WORLD IS WRONG WITH HIM?

The next day, Ben and Lauren had their last date.  He told her he loved her.  He told her everything she wanted to hear.  But Lauren – well, she could tell that he had a heavy mind and was thinking about something, but she wasn’t sure what.

Ben said he knew he loved her right away, but he didn’t know why.  He said what the hell is happening?  And then Lauren’s face fell so he kissed it all better.

Then Ben started questioning the fact that he knew he loved her right away.

Lauren didn’t feel like Ben was Ben, and that he had a lot of doubt in his mind.

Ben said that Lauren impressed her through the whole process.  She told him she was ready to spend the rest of her life with him and HE DID NOT RESPOND.  He said whatever happens, you have made me a better person.  You stood beside me at all times.  And not only allowed me to know you better, but to fall in love with you.

In the words of this season, Ben was NOT VALIDATING her.

I’m telling you, we all kind felt like it seemed as if he might have been letting her down easy.

Ben saw Jojo the next day and dang . . . they kissed like it had ben months and months.

Ben seemed super happy, they seemed super relaxed . . . it seemed very normal for the two of them to be together on a date.  It was just comfortable.

JoJo kept saying BABE!  Like in a normal voice.  Like in the way I say sweetie to Steve.  As if she’d been calling him BABE her whole life.

Jojo made sure to tell Ben she loved him and she was ready for the future, but Ben told her his mind was in a thousand different places even though he was clear that he loved her.

Jojo was afraid she was going to look like a fool . . . but who cares because holy cow, that girl looked amazing after going for a swim!  Seriously.  After I’ve been for a swim, I need to put a hat on or it looks like seaweed is on my head.

Later, Ben had trouble articulating his thoughts.  Jojo told him to be honest, to never censor himself around her, and asked him to tell her about any concerns or doubts that he had regarding their relationship.

He told her she was his best friend, that they had passion . . .

So she took him into the bathroom!  Maybe the sign was in there?

We couldn’t see Ben or Jojo when they went into the bathroom, but we could hear them.  Jojo was whispering, but Ben just basically shouted and it echoed.  She grilled him until he admitted that he told Lauren he loved her, too.  She broke down.  She was hurt, upset — she felt naive.

Then Ben left with an alarm clock.  For real.

Because maybe he was afraid he would sleep past the biggest day in his whole entire life.

Jojo wanted Ben to love her the way she loves him.  Jojo said there’s no one else for me!  But that’s really because Ben is the bachelor and there are no other guys for Jojo.  So that’s not really a fair statement, if you ask me.

Looking down at the ring choices, Ben had an epiphany and figured out who it was.  He loved two women, but he was 100% sure that he was totally in love with only one of them.

The girls had to get on a helicopter to go see Ben for the last time.  They were both in skintight, super long dresses and they had to climb up into the helicopter.

Jojo was the first one off the helicopter.

We honestly didn’t see that coming because the editing really made it seem like Ben was going to pick Jojo.

Jojo started talking first and gave a big ole speech. She told him this process was worth it and he was worth it.

He responded by telling her what they had was real, and that he found love with her, but he found it with someone MORE.  He told her not to question his love for her.

Jojo said she was confused, blindsided, and wanted to know where it went wrong.  He said it never did.

She said it was okay (it wasn’t, she was just saying it) and he said no, it wasn’t, and asked to walk her out.  They hugged goodbye and Jojo fell apart in the limo.

Ben cried and cried. He said whenever anything went wrong, Jojo was always the first to come sit next to him and tell him “you’ve got this” and she meant it.

But then Ben rallied.  He just perked right up.

He called Lauren’s dad and asked for permission to marry Lauren.  And he gave Ben his blessing, and their family’s blessing . . . it was a love fest.

Then Lauren walked up, and she spoke first, too.

I really don’t remember this on other Bachelor seasons.  I still don’t understand why the WOMEN had to be the first to start talking.  Ben should have started both conversations!  That’s how I feel anyway.

Once Lauren finished declaring her love for Ben, he let her know it was her.

And the best line of the night was when Ben said, I want to wake up every morning and kiss you on the face.

They spent quite a bit of time saying, you’re my person.

And then they went off in a helicopter.

There was an After the Final Rose show, but I was driving home.  I watched it super duper late last night and couldn’t bring myself to take any notes. 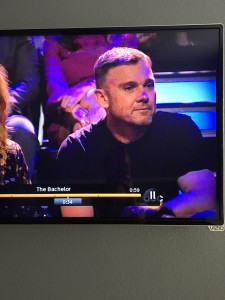 I would know him anywhere.

I loved him for years.  YEARS!  And I would buy Teen Beat magazines just to have pictures of him.  Kerry loved him, too.  In fact, I wrote him a letter once asking him to write Kerry a happy birthday note.

He never did.  But I still loved him.  It didn’t sway me in the least.

He was in a show called Silver Spoons (with Justin Bateman) we must have watched every episode a hundred times.

I will also confess that I had a Fisher Price cassette player and we would tape record the show JUST SO THAT WE COULD LISTEN TO IT.  We couldn’t see it.  But we could hear our beloved Ricky.

Later, he just wanted to be called Rick.  And he was also on NYPD Blues and I watched that show just to see him.

So I swear that’s Ricky Schroder.

Okay, so The Bachelorette starts May 23.

And Bachelor in Paradise is coming on sometime in the summer.

And I will probably just watch both for fun.