Hey there!  How was your day?

Mine was good.  Yesterday was better.

I kept my promise to all of you.  SEE??  This was yesterday. 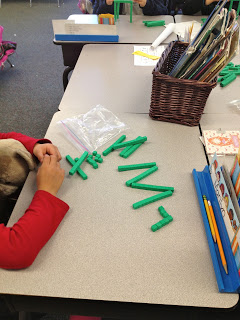 (This little girl is holding our class bear.  His name is Wilson and he makes everything better.
Did someone hurt your feelings?
Hold Wilson.
Does your ear hurt?
Hold Wilson.
You’re tired?
Hold Wilson.
You miss Mommy?
Hold Wilson.
You wish you were still in kindergarten?
Hey!  You little stinker!  Hold Wilson.
You don’t feel good and you’re a frequent flyer that always
goes to the nurse?  Not this time.
Hold Wilson.
If you ever come to my class, don’t ever hold Wilson.
He’s covered in snot and germs.  I try to wash him as often as possible, but . . . I don’t know.  I have enough laundry to do. 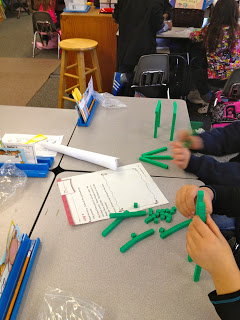 Look!  They’re building.
We will count later on.
We’re not there yet.
Soon.
Yikes.  Maybe I need to hold Wilson.

Okay, let’s get on with it.  Talk About it Tuesday!

The episode opened with Sean in the shower.  I didn’t think it was necessary or appropriate, but I did rewind.

Listen here.  It doesn’t matter how many times.  That is neither here nor there.

HELICOPTER.
I think we all know how I feel about helicopters.

Kacie B. was surprised.  Uh, wasn’t it Kacie’s B.’s season with Ben that turned into the SEASON of the HELICOPTERS?  I don’t get why she was surprised.

Anywho, Sean takes Sarah (the girl with one arm) on a one-on-one date.

Here we go again — we’ve brought heights into the mix.  AGAIN.  Sean and Sarah have to free fall through the air.

(These types of things actually make me happy that I have a heart condition because it comes in pretty handy.  For example, I can say, “You’re bungee jumping this weekend??  Lucky!!  I really really really want to do that, but my cardiologist won’t let me.”  Or “I have ALWAYS wanted to free fall off of a building with a strange man that I just met in order to get a rose because I can’t pick any from my neighbor’s yard without getting yelled at, but my cardiologist won’t let me.”)
At least Sean was realistic – he said it was a sense of accomplishment and that they did it together.  Exactly.  I love that he did not give any stupid “now we have reached new heights and the lowest of lows and so we will live happily ever after until I no longer have any more roses to give you.”
Sarah got a rose . . . AND a kiss.  Sarah kept saying ‘fairy tale’ — she needs to sloooooow down.  Good grief.  It’s only the second episode!!
Next up:


Tierra was getting on people’s nerves.  She might be THE ONE this season . . . we will have to keep our eyes on her.   Something is off.  Anyone with me on this?
Lesley got to kiss Sean because the photo shoot director told her to . . . and then the rest of the girls were ready to hurt her in one way or another, mainly through the method of “If Looks Could Kill Lesley Would Be A Dead Woman”.
Kristy’s shoot was hot . . . according to the girls.  But Tierra wasn’t going to let it bother her.  Nope.  Instead, Tierra decided to talk about herself in the third person.
Pool Party (in which no one actually gets in the pool):
Lesley doesn’t kiss Sean during their time alone together –then debates about whether or not she should have kissed Sean –then she steals Sean back from another girl –and then she finally kisses Sean.  This girl is living my life, but instead of debating on whether or not to kiss Sean, I’m debating over whether or not I should eat another chip.  It’s better if I don’t –but they taste so good –I’ll regret it if I don’t –what if hubby eats the last one –I should just probably finish the bag –what should I do –and then I always end up eating another chip.
Katie (the girl with the really BIG hair) does not fit in.  And so she goes home.
Kacie B. got the rose on the group date.  So Tierra wanted to punch her.  That’s a totally normal reaction, right?
Then we saw a one-on-one with Desiree – Prank Date.

Punked.  Candid Camera.  Either way you look at it, it’s reality and I was on board.

I absolutely loved how giddy Chris Harrison is.  Totally.  He was into it!

She was a really good sport so they followed up with dinner at Sean’s. (steak and TWO vegetables – where was the bread??  Or the baked potato?  And the butter?  Thank goodness there was wine.  Oh, and they had some, too.)
I like Desiree.  She’s very sweet and normal so far . . . Sean and Desiree seem like a good fit . . . you know, swimming, kissing, talking, laughing . . .
Cocktail Party:
Amanda — was SCARY.  And I don’t know who she is or where she came from which made me think that she might possibly be an intruder or an alien.
Rose Ceremony:
A whole bunch of girls received roses – obviously.  But Amanda received one so she must have used some sort of alien mind trick on Sean.

Two girls did not receive roses, but don’t worry about it because we didn’t get to know them and I don’t even know their names.  Poor things.

The previews for next week show Tierra falling down the stairs!  I CANNOT wait!!

And that pretty much wraps it up.  Did I forget anything???