It’s episode three of The Bachelor and I’m gearing up for some girl drama because we all know Ben isn’t going to provide any.

It started out with a few of the girls trying to be polite while they gossiped about Olivia.  They were soft spoken and said they want to connect with her, but gosh darn it, they just can’t.

Olivia, once again, was not wearing any make-up and she does not look at all like the same person as when she is wearing make up.  I mean, it’s WEIRD! 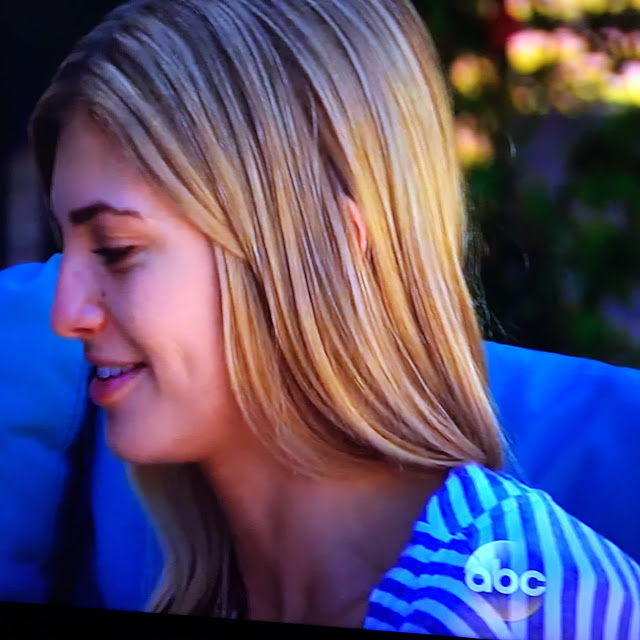 WHAT IN THE WORLD?

The girls learned Lauren B. got the first one-on-one date.  She is super cute, and soft spoken, and looks good with or without make up, if you were wondering.  She is also a flight attendant and that’s all we know.  The date card said something about the sky being the limit meaning it’s time for LET’S GO ON A STUNT PLANE AND DO TWISTS AND TURNS AND LET’S STALL, TOO!

UGH.  Meanwhile, Lauren B. is a flight attendant so other than the stunts, she was fine.  In fact, she said flying with Ben took her nerves away and she felt so content and they kissed.  Blah blah blah.

Afterwards, they ended up in a meadow or the desert or some sort of landscape situation with a hot tub.  In the middle of nowhere.  Ben said he knew it was cheesy, but hey, there’s a tree over there, why don’t you go change into your swimsuit and I’ll pretend not to look?


Insert steamy hot tub scene with kissing and sound effects of kissing.  Then throw up.

Back at the house, Caila had a bit of a breakdown when she realized for the first time that this was a different type of dating situation and that there are other girls there and he could actually break her heart.

Back to Lauren B. and Ben — they went to dinner and it turns out that she is just a normal girl.  A NORMAL girl with a normal family who wants to give her kids the same wonderful childhood that she had.  Let’s all say it together now:

I hate to jump the gun, but I think I like this girl.

Ben thought she was super special so he decided to tell her that right before the show, his dad had to have triple bypass surgery (yikes) and how it taught him that his mom loved his dad?  Or something like that?  I don’t know.  I’m sure he made it sound better, but all I kept thinking was I know my mom loves my dad, I don’t need my dad to have triple bypass surgery to realize it, no thank you.


And then Ben opened a door and voila!  It was another private concert.

The group date was next.  The girls went to the Los Angeles Coliseum to play soccer.  Ben wanted to see how the girls acted towards one another, if they had good attitudes, etc.

Excuse me, Ben.  EXCUSE ME.  I would not  have a good attitude if you were flirting with someone else and dating someone else and just standing there doing nothing because I hate to say it, but Ben is boring.  What about Ben’s attitude?  Huh?  No, sir.

There were a couple of professional women soccer players to help coach the girls, and then, of course, the girls were split into two teams and the winners would get to have a cocktail party with Ben while the others went back to the mansion.

The game was intense.  Not.  I barely watched.  Sorry.  Ben acted as if it was the Super Bowl.  The “Stripes” won and the “Stars” lost.  Basically, all you need to know is that Olivia’s team won.

The girls were upset so they started making fun of Olivia’s toes.  Her toes!  TOES!  For real!

But that’s okay.  Olivia said perfection was lame.  And I have to agree.

Ben met one on one with a bunch of girls and Amber obsessed over the fact that she needed time.  She wouldn’t shut up about it.  As soon as she got time with him, she basically attacked him and kissed him and then felt that it meant something.

It must have, too, because Ben gave Amber the rose.  I honestly didn’t see that coming.  But Olivia was fine with it, don’t ya know.  When Ben stood up, he used her leg “to push off of” and that was a sign for her.  And Ben knows that she “gets” his signs.  He also pushed off on the leg of the girl on the other side of him, but that’s neither here nor there.  It’s Olivia’s world and we’re just living in it.

When Ben arrived, Jubilee told him he was twenty minutes late and that she wasn’t excited for the date.  I truly think she was trying to be cute and sarcastic, or even maybe aloof . . . but it didn’t come out right.  When a helicopter (YES, a helicopter) showed up, Jubilee made sure everyone knew that she was afraid of heights and then proceeded to yell out Does anyone want to go on my date? which did not go over well with the other girls AT ALL, as you can imagine.

They flew to a spa (Jubilee’s nerves lessened in the helicopter because Ben’s hand was on her knee – be still my heart).  The spa was gorgeous and exactly my type of date.  There were snacks to start out with which is always a plus, and they tried caviar.  Not exactly my type of snack, considering I prefer Cheetos, but whatever.  Jubilee had to spit hers out which is really romantic, along with the fact that she said her go-to food was hotdogs. (I wouldn’t tell Ben about my love for Cheetos until he was down to the final four.  Just saying)

They played shuffleboard and she called him white boy and he laughed so then they had a big ole discussion about it in the hot tub – how she feels he’s uncomfortable a lot and he needs to relax . . . and how she is there to help him do that.

I think a lot more was said, but all I noticed was this camera angle, and is it just me or do these wine glasses look gigantic? 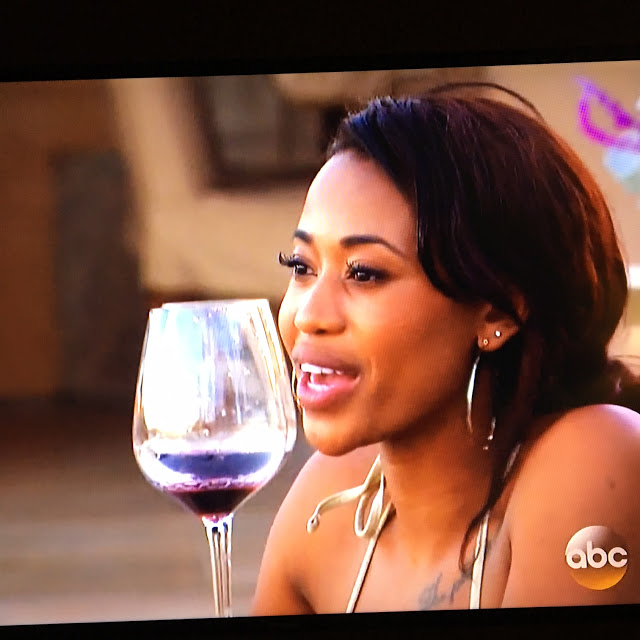 So, whatever.  They kissed and he seemed into her.  At dinner, they talked about her past and how her whole family died, and so she experiences guilt.  She was emotional and it was sad.  🙁  Ben said all the right things and gave her the rose.  He really likes her.

Back at the mansion, none of the girls could believe that Jubilee was back.  It was shocking.  (not really)

There was a ton of tension in the house.  But then Ben showed up and let the girls know that two people close to his family had just died in a plane crash.  Geesh!  This episode was sad!

We need the wine, STAT!
SHARE ALREADY!
As soon as Ben finished his speech about the plane crash and the pillars of community, and how life is short, and he got all deep, Olivia stole him away.
And she thought she would be deep, too.
She went right into what she would change about her body if she could, and how she hates her legs.  Because that goes together.  That’s on topic, clearly.  Plane crash.  Meaning of life.  I hate my legs.
In fact, some people talk about her legs and they say she has . . . Hold on.  She’s choked up.
And they say she has . . . cankles.  It hurts.  But she tries to be . . . Hold on.  She’s choked up again.
She tries to be strong.

Ben wasn’t having it.
Jubilee took Ben away and gave him a massage.  But don’t forget.  She already had a rose!  NO!  No WAY!  Are you kidding me?  SHE HAS A ROSE!
Can’t you just hear it?
The girls felt it was rude and disrespectful and an elephant in the room . . . so Amber took it upon herself to tell Jubilee all the girls wanted to talk to her.  Jubilee said no, she wasn’t going to talk to her, and she ran off.
Ben got involved because he felt responsible for the emotions in the house and if there were hurt feelings, he wanted to help.  Amber tried to talk to Jubilee (again!) in front of Ben, and Jubilee cried.  Amber kept at it and Ben just comforted Jubilee.  ALL IN FRONT OF AMBER.
Ben gets out of that situation, finally gets to sit down on the couch, sighs deeply, and THEN BOOM!  Lace showed up.  She was visibly upset.
When is she not?
Lace cried (again!), apologized for her behavior, said she needed to better herself, and that she needed to learn to love herself.  AND SHE SAID GOODBYE.
Whoa.
What in the world?  What is happening?  Lace said it wasn’t the right timing for her and Ben.  AND SHE LEFT.
Whoa.

Is this Magic wine?
At the rose ceremony, Olivia was the very last one called.  Ha!
HA!
The girls that went home were Jami (bartender) and Shushanna (the girl who spoke another language besides English).
Olivia still thinks that Ben and her have a secret communication.  When he gave her the rose (last!!), he squeezed her waist a little bit and she knew what he was trying to say (he likes her).
I think she’s doing what I did when I was in junior high and a boy looked at me when he passed me in the halls or brushed my shoulder on his way to his desk . . . I mean, I thought it meant he liked me.  Duh.  Obviously.
Meanwhile, he wasn’t looking at me, not to mention, I wasn’t wearing contacts and didn’t want to wear my glasses in front of anyone so I had no clue who the boy even was and, for all I know, he could have been the custodian and the boy brushing my shoulder probably needed to get to his desk, and I was in his way when I was reaching into my backpack for a pen that was color coordinated to my notebook, and that’s why he brushed my shoulder.
In other words, Olivia is making all of this up and living in a Fantasy World.
And that concludes Episode Three.
Until next time!
« Five for Fraturday
Plays for Any Time of the Year »