I always have five centers.  Because I have five table groups.  A room parent (or two) usually organizes the party, and I just put my stamp of approval on the different ideas, but generally it goes something like this:

The kids rotate through the centers and  I set a timer for the EXACT AMOUNT OF TIME we have for the party divided by FIVE CENTERS.

THE TIMER MAKES ME FEEL BETTER.

I hate it WITH A PASSION.

Usually, I’m in charge of the timer.  Refer back to the OCD, Controlling Teacher, Chaos Coordinator section of this post.

The biggest problem with the timer is that some of the centers do not take the allotted time, such as twelve exact minutes, which means after about seven minutes, let’s say, I’ll have a group of six antsy kids ready to move on.

On the other hand, a center might be a craft that takes TOO long.  So the timer will be ringing, and it’s time to rotate, but I’ll have one or two or all the kids in that center NOT MOVING WHATSOEVER AT ALL because they’re still working and they’re INTO IT. Meanwhile, the antsy kids from the other center that didn’t fill up the allotted time (the horror!) are now telling the lurkers to MOVE, I WANT TO SIT DOWN, MOVE OVER, DON’T YOU HEAR THE TIMER?

I’m telling you, I HATE THE TIMER.

My teammate, Heather, does NOT use a timer at all.  She quit the timer a few years ago.

It’s like she doesn’t have a care in the world!

It’s like SHE’S DRIVING HER CAR WITHOUT HER SEATBELT ON!

Every year, every party – she does NOT use a timer.  Not even for her Valentine’s Day Party.

And not even for her End of the Year Party.

Every year, as we get closer and closer to our party days, I ask her are you using a timer?

And she says NO.

And then she follows it up with oh my gosh, I love not using a timer.  It’s the best thing ever.

Kids can go wherever they want, stay as long as they want, or move on.  If it’s a game, they can go back to it if they want to.  She tells the kids they only get to make ONE craft at the craft stations, and they can only decorate ONE cupcake or cookie, but the games and Bingo and whatever else is available are just OPEN.

And every year, I think okay, I’m going to run my party Heather’s way.  It just sounds way more fun, a lot easier, and free flowing.

And every year, I CHICKEN OUT.

THIS YEAR SHALL BE DIFFERENT.

In other words, the KIDS are going to be wild and free, but that’s neither here nor there.

But we are doing it!

I’m FREAKING out, but whatever, it’s an hour and a half of my life, I can handle it, right?

Plus, if it goes horribly wrong, I’ll just know NEVER EVER EVER to do it again.

Do you use a timer or are you a hippie? 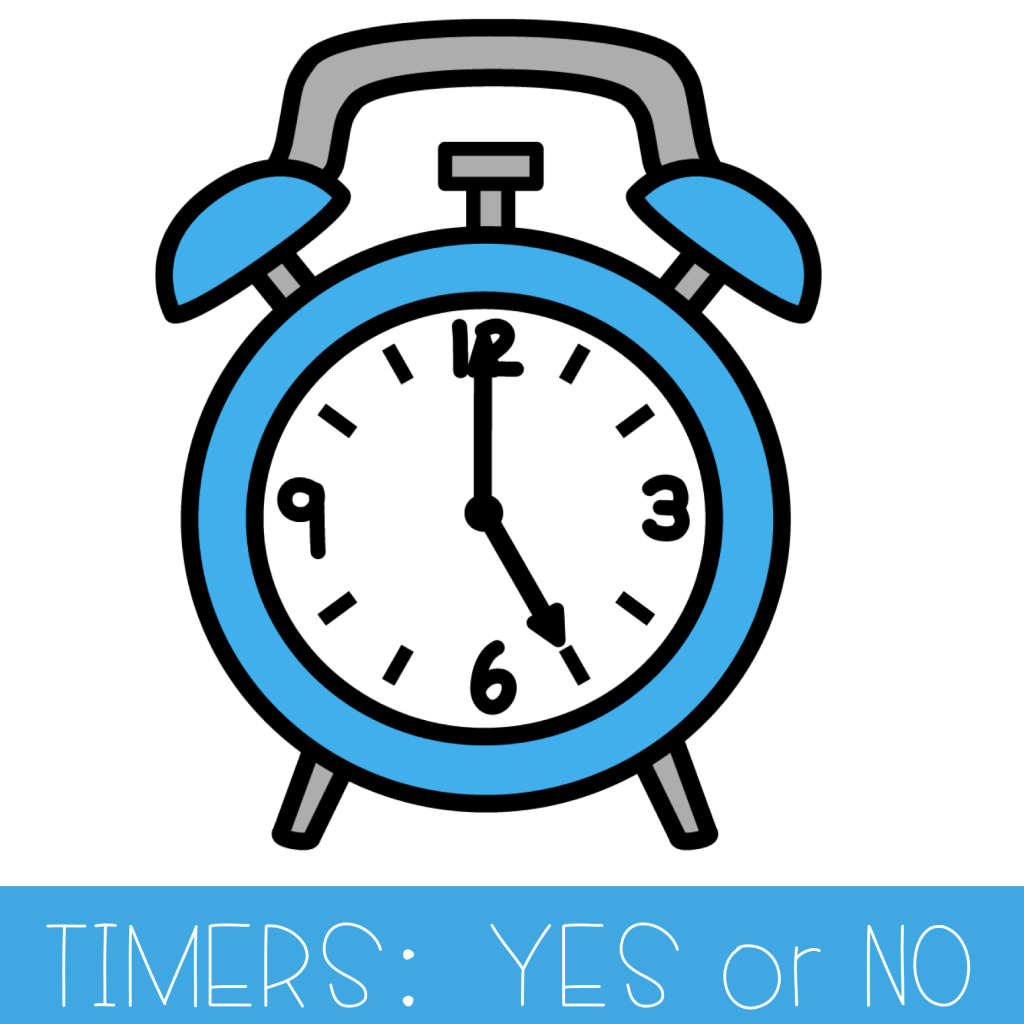 Please let me know!  And EXPLAIN YOUR ANSWER if possible.

THANK YOU, FAITHFUL BLOG READERS OF MINE.