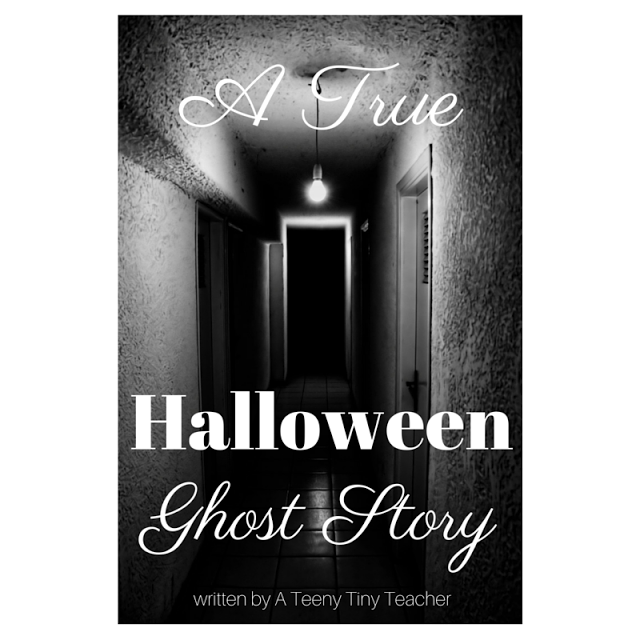 This is the first time I have ever written this story down.  I’ve told it a thousand times, but I have never put it in writing.  So I bring you this story with a little bit of trepidation.  First, I am changing all names to protect the guilty innocent people involved.  Second, you have to promise not to turn me into the police.  Or the union.  Or whatever.  Third, I believe all the statutes of limitations have run out anyways, so don’t even try.

I was in my first year of teaching first grade EXACTLY fifteen years ago today and what I’m about to tell you happened on a FRIDAY on HALLOWEEN.    Please keep in mind throughout the telling of this story that I was in my FIRST YEAR.  And I was proud and happy to have my own classroom.  I was IN CHARGE.  I knew what I was doing.

I had a pretty normal morning.  Since it was Friday, the girls and I went out for lunch.  When we returned, we met our kids out on the playground where they lined up.

My kids were all in an uproar.   I heard variations of “Esteban (I changed the name) went to the office!” “Esteban got in a fight!”  “Esteban is in trouble!”  “We don’t know where Esteban is!!”  It was pandemonium.

Well, let’s remember I was IN CHARGE.

“Boys, and girls, relax.  Shhhhh.  Quiet down!  Stop!  SHHHHHHH!”  I had absolutely no signals to get my kids’ attention whatsoever.


I said The office will call me if I need to know anything.

We went into the classroom and I told them about this GREAT activity that we would be doing for math.  It was called Spinning Ghosts and it was an AIMS activity and it was fantastic for a first year teacher to do especially because we didn’t have standards and/or math curriculum so I could teach whatever the heck I wanted and nobody said anything about it.  The best part about this Math activity was that students got to stand on their chairs while they were spinning their ghosts.  Yes!!!!  Let’s all stand on our chairs!!!!!  What an awesome idea!!!!  And I’ll do it, too, so I can be a good role model!!!!

So there we all were, spinning our ghosts, when sweet little Carol asked to go to the bathroom.

Let me give you some background on Carol.

Carol was a know-it-all.  She tried to correct me all of the time.  She constantly told me that I was spelling things wrong, which I wasn’t but she really wished that I was.  She was into everyone’s business and knew everything that was going on.  Carol was onto me.  She knew I didn’t know what I was doing.

“Can I go to the bathroom?” Carol asked.

We kept spinning our ghosts to see which ghost would actually spin (the one with one arm down?  or the one with both arms up?) and we were having a great time.  The next time I looked up . . . oh, I don’t know . . . ten minutes later (??), there was a huge crowd of kids around Carol.

From the perch on my chair, I said, “What’s going on???” in a very stern, in charge voice.

The kids replied with lots of squeals, “Carol’s got Esteban’s finger!!!!!!”

I am proud to say that I got down from my chair.  Oh, yes I did.  I walked over to the crowd and I was annoyed.

“Carol, whatever you have, throw it away, wash your hands, get back up on your chair, and SPIN YOUR GHOST!”

And that’s what she did.

The rest of the day went by without a hitch.  Well . . . some kids fell off their chairs and no one would stay quiet and everyone was super excited for Halloween, but we made it to the end of the day.

At dismissal, Esteban’s older sister came to my classroom and asked if she could get his backpack and stuff.

I dismissed my kids and ran up to the office.

“What happened to Esteban?”  I asked whoever would listen.

Why would they, right?

“The big outside door to the boy’s bathroom (which is usually held open by a large, circular trash can) slammed shut on Esteban’s finger and cut half of it off.”

I don’t really know how she understood me because I told her the whole story in one breath at a high decibel.  We decided to get a craft stick and a Dixie cup to forage through the trash.

While we were sifting through the garbage, the classroom phone rang.

As I walked across the room to get it, I had a sinking feeling.  I was going to be fired.  I would lose my credential.  This was it.
“Hello?”
“Kristin,”  my principal said.
“Uh huh.”  I’m dead.  It’s over.  Almost two months in my own classroom is a pretty good ride.  Right?
“Kristin . . . has anyone ever given you the finger before?” he laughed.  Laughed.   Laughed.  Laughed.  Roared with laughter.  He barely got the sentence out.
“WHAT?!  Is this a joke????  What is going on?” I cried.
Amid the bursts of laughter, “No, no.  Really.  Try to find that finger.  They may be able to re-attach it.”

Really.  My principal did that.

Sheri and I kept looking through the trash.  Sifting ever so carefully.  Afraid.  Wanting to find it.  Not wanting to find it.  Still half believing that it was all a prank.
AND THEN.
There it was.  Amid ghosts and tissues and garbage.
Half a pinkie finger.  From about halfway between the first and second knuckle up.  It was a clean cut.  Had the fingernail and everything.  I’m not kidding.  THERE IT WAS.  ESTEBAN’S FINGER.
Sheri and I both said, “Hmmm.  Well, there’s something you don’t see every day.”
We said, “ Well, now we’ve seen everything.”
We said, “ Isn’t that interesting?”
We screamed, “AAAAAAAAAAAAAAAAAAAAHHHHHH!”
We shimmied it into the Dixie cup and then I ran back up to the office.  I will NEVER FORGET the way the finger threatened to bounce out of the cup as I was running.  Jiggle, jiggle, bounce, bounce.   Are you picturing it?
My principal drove it to the hospital but it was too late.  It had been sitting in my classroom’s trash can for way too long.
So Esteban came back a few days later with a nub.  A NUB.  Sadly, nubs don’t grow back.
I am still amazed that his parents didn’t sue, that I didn’t get in trouble, and that my principal thought it was funny.  I’m not AT ALL surprised (in hindsight) that little Carol asked to go to the bathroom.  That was just her excuse for crawling around on the ground near the bathrooms to look for Esteban’s finger.  Because she knew.  And I didn’t.  And she loved that.  The fact that she found what she was looking for (a FINGER) and held it in her bare hands grosses me out and cracks me up at the same time.
If this were to happen in my current school, I’d be a dead woman.  DEAD.
Lesson learned:  I ALWAYS ALWAYS ALWAYS investigate now.  If my kids say that someone has something, I check it.  Although in all my years since, no one has ever said that they have someone else’s body part.  I do have to caution you on investigating everything, though.
My friend told one of her kids to stop playing with something while she was teaching a lesson on the carpet.  He didn’t.  So she told him to give it to her.
It was POOP.  From his pants.  And he had been playing with it.  For real.
So BE CAREFUL.
That’s my story.  And it’s true.  And it happened to me.
Anybody out there got something like that to make me feel a little better???

Please please please leave a comment so that I know you don’t think I’m an awful human being and/or teacher.

Have a happy Halloween.  And remember, I believe all of the statutes of limitations have run out.  So don’t even bother.  Put the phone down.