As I stated yesterday, Friday was THE WINDIEST DAY IN ALL THE LAND.

My former administrator would never have let us have recess with the kind of wind we had.  I blogged about it once before.  I mean, it is just wind.  It’s not like a kid is going to be picked up and carried away or something,  My current administrator is a firm believer in recess (including a Principal’s Recess once a month for students who haven’t received any citations) so we were good to go.

Which means my kids LOST THEIR MINDS.

I already said I can’t explain the phenomenon of California winds and what it does to the minds of children.  I can only liken it to full moons.

So that was my day.

And then, after school, we had our staff Christmas party.  Steve happened to have his Christmas party on the same day so we split up and just each attended our own.  It was fun.  I had fun.  I won a movie gift card because my plate had a Christmas tree on the bottom AND I NEVER HAVE THE WINNING PLATE OR CHAIR OR ANYTHING so that was pretty exciting.

Steve and I were both home by 9pm.  This does not reflect badly on either staff party.  It just reflects on THE TWO OF US and the fact that we are OLD FUDDY DUDDIES WHO PREFER TO BE AT HOME IN COMFY CLOTHES ON THE COUCH, WATCHING SOMETHING WHILE HE’S ON HIS IPAD AND I’M ON MY COMPUTER, AND EATING SOME SORT OF A SNACK.

We were watching a Big Bang Theory episode at around 9:45pm when the power went out.

Man, was it DARK.

That’s what happens when the power goes out, FYI.

We each got a flashlight and decided we might as well take our party up to bed.  So I read on my Kindle (so thankful that Kindles light up) and Steve started snoring.

After reading for about two minutes, I fell asleep because

After about two hours, EVERY SINGLE SMOKE DETECTOR IN OUR HOUSE WENT OFF.  Can someone please explain to me why smoke detectors only go off IN THE MIDDLE OF THE NIGHT and never in the middle of the day and NEVER WHEN THERE IS AN ACTUAL FIRE??!!  AND ALWAYS ALWAYS ALWAYS WHEN THE POWER GOES OUT?!  And don’t say it’s because of the batteries because Steve just replaced all of them.  Really.  Not kidding.

The noise about killed the both of us, plus poor Murphie.

Steve went around the house, disconnecting them, but as soon as he disconnected the one in my office, the rest MAGICALLY stopped beeping.

With relief, we went back to bed.

And then, two hours after that, one of the intact ones started beeping.

But not in a crazy loud manner.  And not consistently.  It was just BEEEEEP, then silence, then I would doze off, and then BEEEEEEP.

Meanwhile, Steve was just snoring away and had no clue whatsoever so I did a little coughing, shaking the bed, pushing, nudging, and anything else I could to make him wake up in a natural manner BUT NO CIGAR.  He wasn’t waking up.

I dragged myself out of bed, got the ladder (which was still in the hallway) and disconnected the one I thought was beeping, but as soon as I climbed back into bed, put my head on my pillow, got into a comfy position, and closed my eyes,  BEEEEEEEEEEEP.

ARE YOU FREAKING KIDDING ME WITH THIS?!?

Obviously, I WAS OVER IT so I just basically punched Steve upside the head and yelled WAKE UP, I CAN’T TAKE THIS, A SMOKE DETECTOR IS MESSING WITH ME!!!

I have to say that waking up Steve is never fun because HOLY GRUMPINESS and so there might have been a little bit of an argument about how it’s not my fault I’m a light sleeper, and that he sleeps like the dead, and I can’t figure out what I’m doing at 3am, in the dark, on a rickety ladder, and if one of us isn’t sleeping, then the other shouldn’t be, either, and how that doesn’t make sense at all because WE WERE BOTH SO TIRED.

Somehow, someway, Steve figured what to do WHICH PROVES MY POINT ENTIRELY THAT HE NEEDED TO WAKE UP AND FIX THIS SITUATION — HELLO — and somehow I was able to get back to sleep.

But holy cow, it was a ROUGH NIGHT.

When I woke up the next morning, I grabbed my phone and checked my email and saw this: 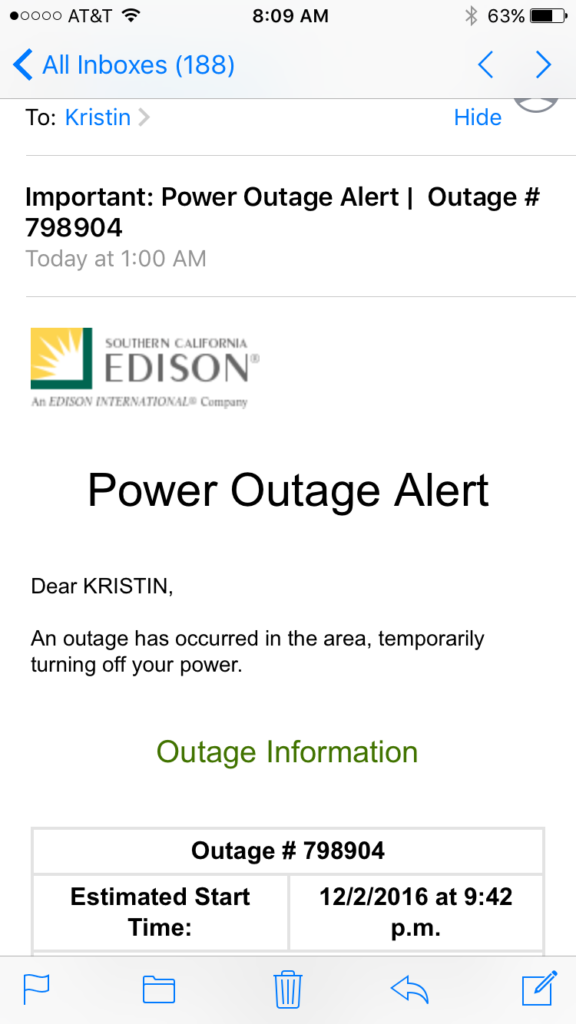 Do you see that I received this email at 1:00am.

I would never have known.

All of this reminded me of the Friends episode with Phoebe so I’ll leave you with this clip while I try to go catch up on some much needed sleep.  🙂