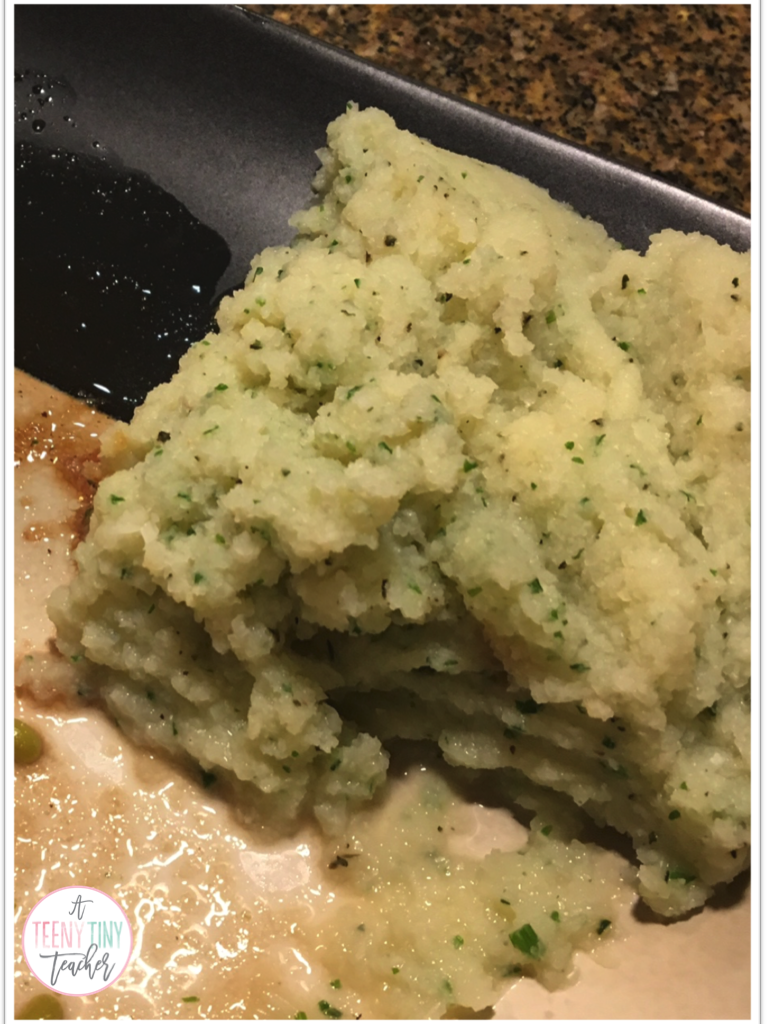 This is a picture of cauliflower mashed potatoes.

READ:  MASHED CAULIFLOWER THAT DOES NOT TASTE LIKE MASHED POTATOES IN THE SLIGHTEST

Three weeks ago, Steve and I started a detox/cleanse type of diet.  It’s sort of like the Whole 30.  I think.  I don’t know because we’re not doing the Whole 30, per se.  We’re doing something Steve got me into and that’s all I know.  And I didn’t talk about it on here because I was pretty darn sure that I wasn’t going to last three hours, much less three weeks.  And I really thought I would be eating however I wanted while I was away from Steve and he would be none the wiser, but I haven’t.

I have lasted three weeks with minimal cheating.  And by minimal, I mean I had some tortilla chips that were not Beanitos, which are the only approved chip that I’ve found and even then, you can only have one or two of the varieties that have less than four ingredients.

I have completely surprised myself with my determination and ability to function without caffeine, sugar, wine, or anything else that’s fun and makes life worth living.  It ends this Friday and to say I’m looking forward to a Starbucks nonfat white mocha is the biggest understatement I have EVER made in my life.

So anyways, last weekend, Steve made steak (which we can have once a week, but I’m not a big ole red meat eater so this was not as exciting for me as it was for him), green beans, and cauliflower mashed potatoes.  We’d been seeing these mashed cauliflower things all over the place and thought YUM!!

They were DIS! GUSTING!

They did not taste like mashed potatoes IN ANY KIND OF WAY.

It was like a sick joke.  All those people all over Pinterest and the Internet telling the rest of us how yummy they are, and how satisfying, and how JUST LIKE mashed potatoes they are . . . NO.  JUST NO.

I want to know what kind of mashed potatoes these people have been eating??  Because in our house, and my mom’s house, and at the Cracker Barrel, mashed potatoes are creamy, and smooth, and have butter, and gravy, and sometimes, to make things even more delicious, cream cheese and garlic!

The only thing I can even think of how all those Pinterest and Internet people likened cauliflower to actual potatoes is that they, at one time or another, had cauliflower on their plates which somehow got into their real mashed potatoes, and they thought yum, that was tasty for just a split second and decided to tell the world about it.

But it’s a sick joke, people. 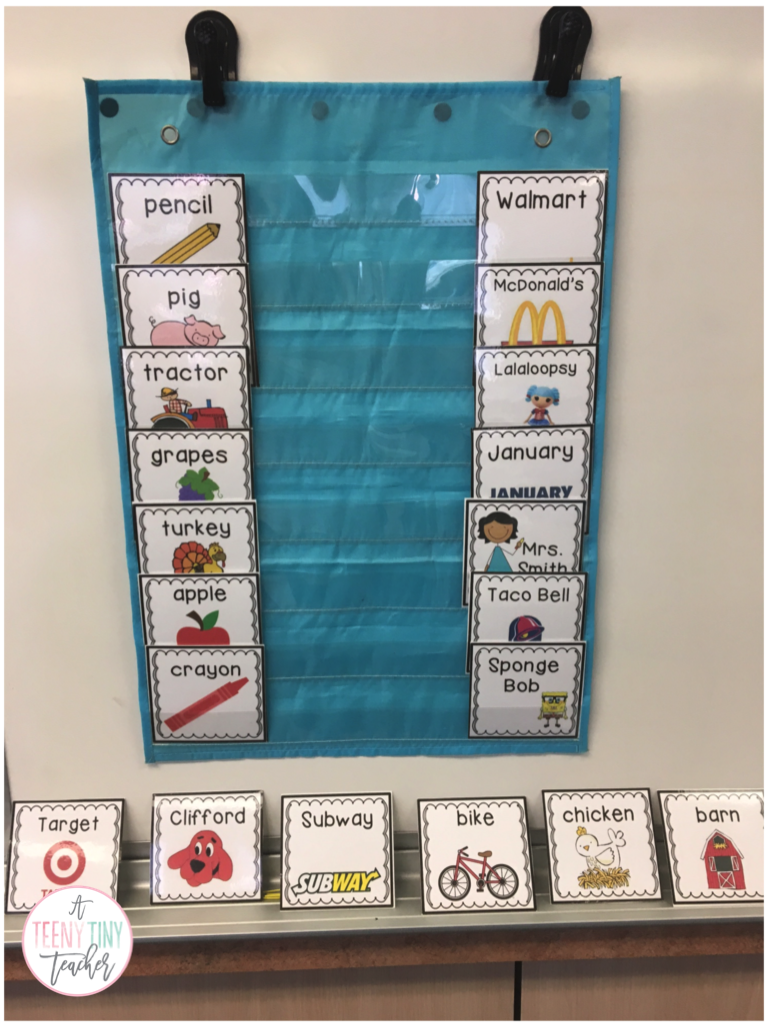 We started studying common/proper nouns this week and I loved loved loved these cards from Mrs. Wheeler!  My kids were FREAKING OUT over all the proper nouns that they knew.  It made it so engaging!!  I was salivating pretty bad when I pulled out the Taco Bell picture card but that’s just because I’m hungry and it’s a perfectly normal thing to do when you are eating kale.

One of my kids did not think Target should be a proper noun.  When I asked him why, he said it’s so common!  You can find a Target on every corner!

We followed up with this activity from The Moffatt Girls: 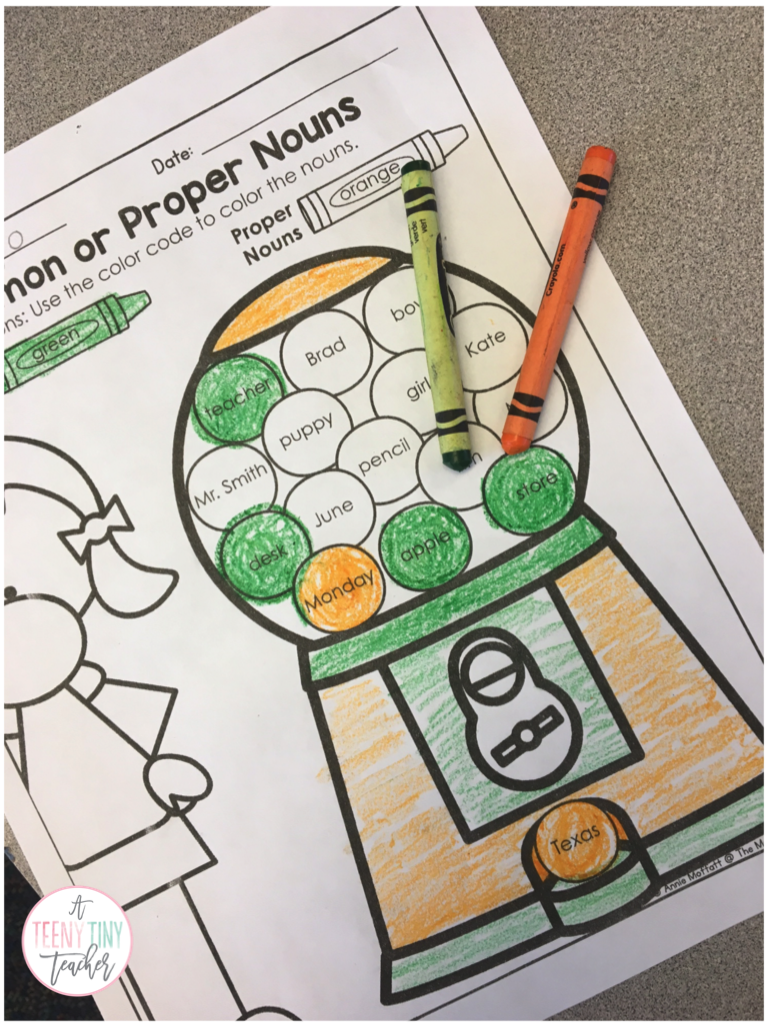 My kid loved it!  I loved the gumball coming out the bottom . . . TEXAS!  My kids cheered for me.  They know all about my twin and her family living there.

This is mainly because I talk in my Texas accent quite often by accident.  I’ve found that when I start to talk in a drawl, they listen better.  It’s a trick of mine.  A tool.  It’s my classroom management, thank you very much. 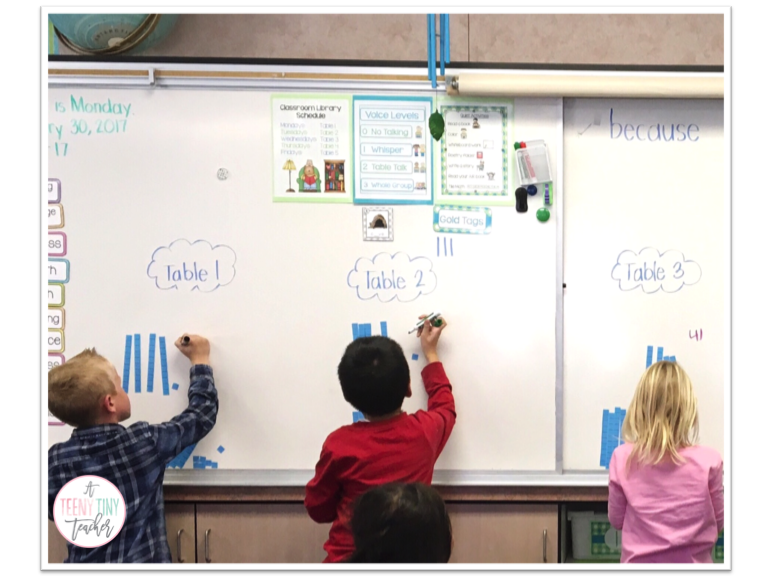 More place value happened this week (not in math groups – womp womp).  My kids are rocking it, though, so I’m trying not to beat myself up too much for not doing math groups recently.

One of my teammates told me she played a game where she called out a number and they had to draw the tens and ones as fast as they could.  She had her kids in two teams and she said they loved it.  I knew I had to copy her, but I just changed it up a bit by having 5 teams.  I did table groups so that each student got up to the board faster.

Is it time for lunch yet?

So anyways, I gave each kid a marker, some magnets, divided up my big whiteboard, and I’d yell out a number.  Then they would build it and write the number as fast as they could.  Last, I would tell them to go back to their table and hand the marker to someone who hadn’t had a turn.  And so on.

And, to bring my point home about not keeping score, one of my table groups was missing two kids that day (we have six kids at each table).  So when the fifth round happened, and one of the kids got a REPEAT turn (GAH!  Say it isn’t so!), THE REST OF THE CLASS SHOUTED OUT THAT HE ALREADY HAD A TURN.  MRS. OLDHAM, SO-AND-SO ALREADY HAD A TURN!

And they didn’t even sit at his table.

Oh, how they knew.

Anyways, it was all super fun and engaging and we had a great time and when they asked me who won, I said it was a tie.

And then we went to lunch which is exactly how I planned it. 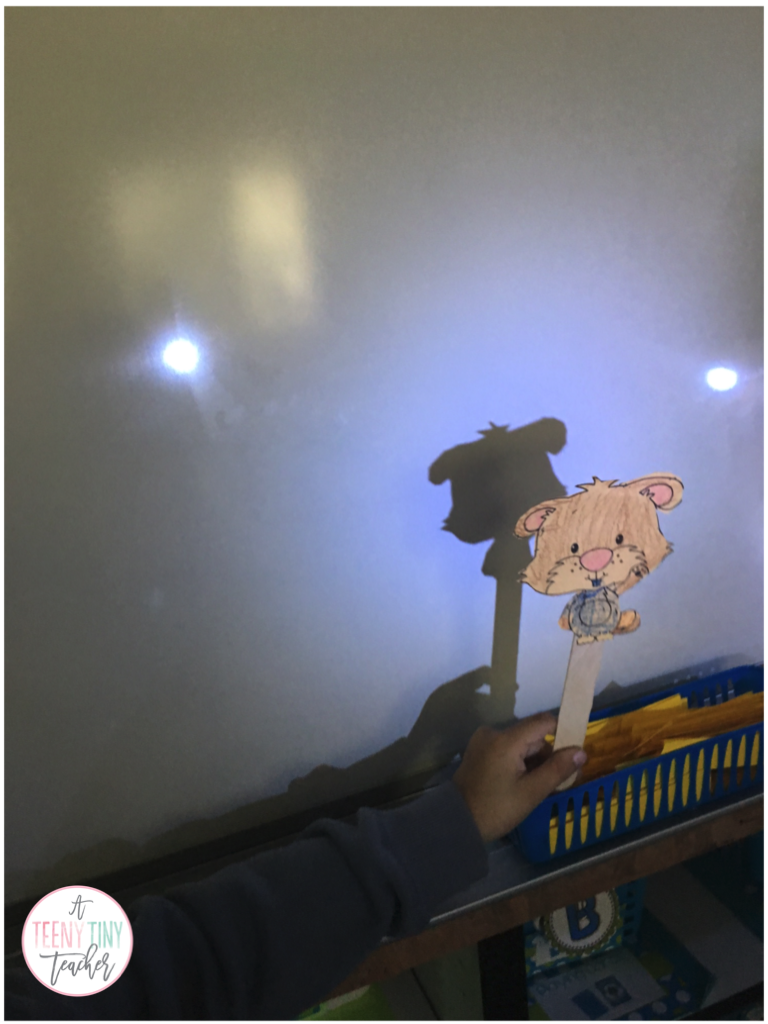 For the first time EVER, I really and truly taught about Groundhog Day, as well as groundhogs themselves.  I am SO proud of myself for this because I just tend to skip right over it in a very nonchalant, don’t know what you’re talking about, I’ve got this and that planned, type of way.

But it was so much fun!

We were Shadow Detectives using Katie Mense’s unit.  I went a little crazy and decided I wanted each of my kids to have their own flashlight.  I felt like it was necessary (see above).  That’s just me.  Call me crazy because I am.  I also knew I could use these flashlights again and again, or for as long as the batteries lasted, anyway.  I got two sets of 18 mini flashlights on Amazon.    They CAME WITH BATTERIES which is HUGE.  The batteries were not inside of the flashlights, however, and each one took 3 batteries, and so it involved taking things apart, putting things back together, and lining things up correctly, but Steve helped so it went fast.

He was so sweet about it because he said I was such a good teacher for making learning fun.  To which I said well, it was Katie’s idea and I’m just copying her, and you’re so sweet, and I think we both just ate brown rice pasta with turkey meat and so we finally feel like we had a meal and so now we’re acting all happy and lovey dovey, but thank you ever so much, dear and wonderful husband of mine. 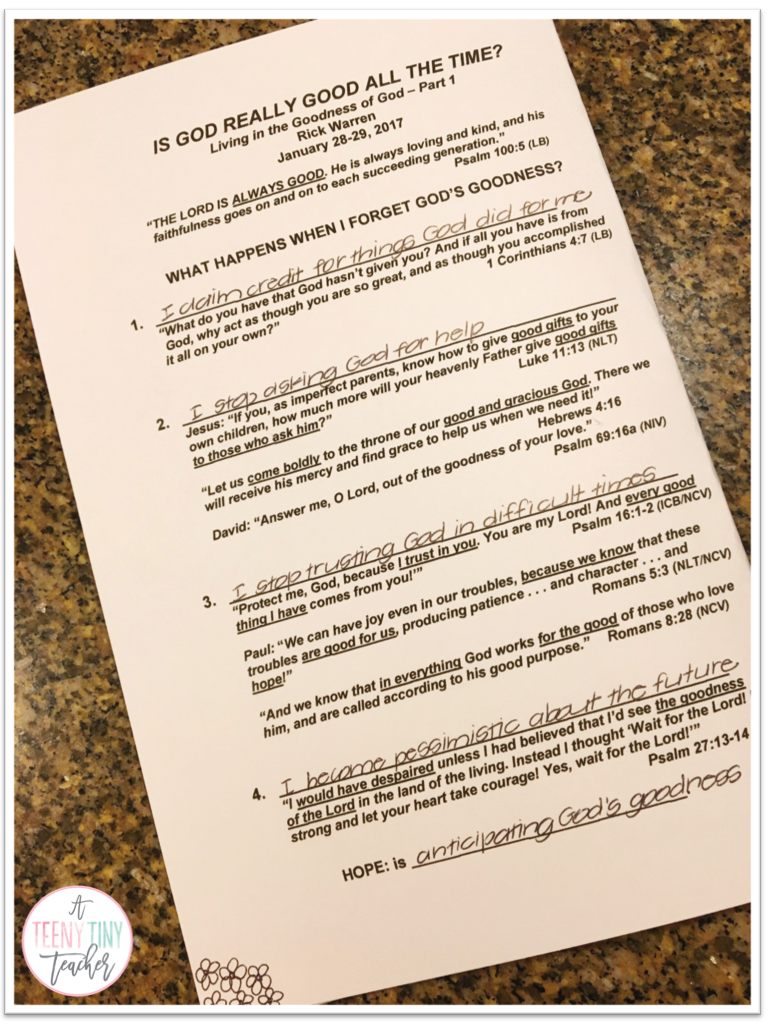 This week, I had a dental appointment and an oral surgeon appointment (back to back) and I had been praying about both for about three months.

I was in a “waiting period” to see if the bone graft that I had done  ALMOST TWO YEARS AGO was stabilizing because even AFTER I had bone graft surgery, I was STILL LOSING BONE.

FROM THE BONE GRAFT THAT I ALREADY HAD DONE.

These things only happen to me so don’t worry that this could happen to you.

I’ve got you covered.  Never fear.

So anyways, it’s not THAT big of a deal.  There are way worse things in life.  I hate to even complain about it.

But in my little life, it is a big deal, whether I want it to be or not, whether I act like it is or not, whether I care about it or not.  Because if I keep losing bone, I will have to start ALL OVER or go in a whole new direction or who knows.  I’m not going to go into specifics because it’s not pretty.

I’ve been praying daily.  I already pray daily (I pray all the time!) but I’ve added this whole please let everything stabilize, please let there be no more bone loss, please let us move forward . . .

And I have several people praying for me, as well.

Then last Sunday’s message was all about BEING BOLD in our requests because God is such a good, good God.

So all week long, leading up to my appointments, I prayed God, you are a good, good God, and You can do anything, and I pray that everything has stabilized and we can move forward.  And You know how important this is to me and You know the desires of my heart and You care about all of the little things in my life and You love me more than I will ever know.

But I also prayed Help me to accept whatever the outcome is and help me trust You and know that all of this is good for me and will build my character, and You will be with me every step of the way.

And then I went to my appointments to hear that . . . EVERYTHING HAS STABILIZED.

My God is a good, good God.

I was so grateful and so thankful that I almost started crying while sitting in the dentist’s chair, with the bib on me, with my mouth wide open, with some sort of instrument probing and prodding my gums.  I think a couple of tears did slip out.

Crying while all of that is happening is not at all unusual for me because I can’t tell you how many times I’ve broken down in a dentist’s chair or at the counter trying to paying my bill (to which that front counter lady asked me if I wanted a lollipop – no joke) or making it all the way to the door before letting it all out in a hallway filled with people staring at me or making it to the parking lot or . . . you get the idea.

I cry mostly because all of this stuff is not my fault, nor my parent’s.  I went to dental check-ups my whole life.  I floss and brush each night.  I use my SoniCare for FOUR MINUTES every night and now I get cleanings every three months.

It’s just something that is a part of my life and I feel like I’m always struggling to get to the finish line.

And to hear that I might have to start a TWO YEAR PROCESS all over again, including another major bone graft surgery was very upsetting, even though I kept telling myself it wasn’t that big of a deal, things could be so much worse, and I have so much to be thankful for.

But God answered this prayer (He answers all my prayers, but sometimes I get a no) the way I was hoping He would.

And He is a good, good God.  And I am so thankful for His goodness and faithfulness.

Just in case you were wondering.