I left the house yesterday to get food.  I hadn’t exactly taken a shower, but I was wearing deodorant.  I’m pretty sure.  Needless to say, it was a very uneventful day around here.

Today I have already been to the store, picked up a sandwich, and I took Murphie on a long walk.   I also showered.  You’re welcome.

Okay, here’s the I Purged My Files And Put Them Into Binders blog post I’ve been sort of promising you and/or talking about.

My teammate, Heather, started talking about this process a few months ago and I think I said something along the lines of You’re insane, there is no way, I like my system, I don’t have time for this because the OC Housewives AND the New York Housewives are on, and BIG FAT NO.


And then she mentioned it a few more times.

And then I happened upon Traci’s blog post all about eliminating filing cabinets and utilizing binders.

And the next thing I knew, I was emailing Heather and telling her to check out Traci’s post, as well as telling my whole team all about it.

Sometimes, you just have to hit me over the head with it before I actually get it.  Case in point:  my Revolutionized Centers.

So I tackled my version of Binder Organization at the very beginning of my summer before a million family members descended upon our house.

The first thing I did was empty all four drawers of my filing cabinet into tubs that will later be used in our garage by my husband.  So that purchase was multi-use. 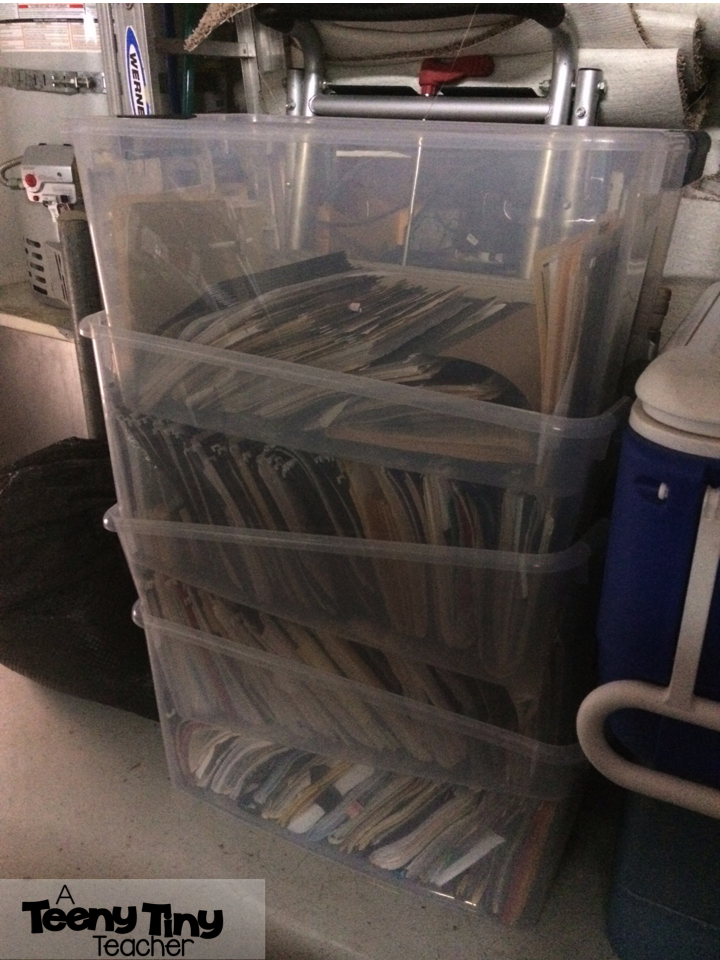 UGH.
Then I bought binders. 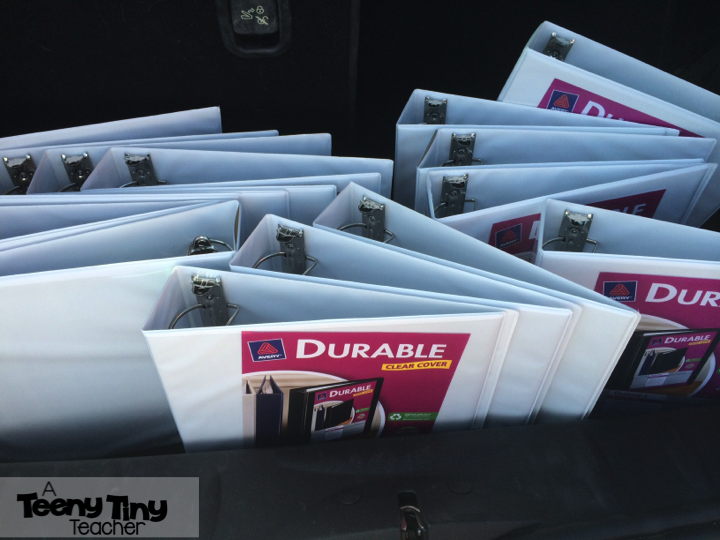 I bought two inch binders because anything else seemed too small or way too big for me to lift.  I bought one for each month (August – May) and then one for Math, one for Language Arts, and one for Centers.
Next, I made covers for the binders. 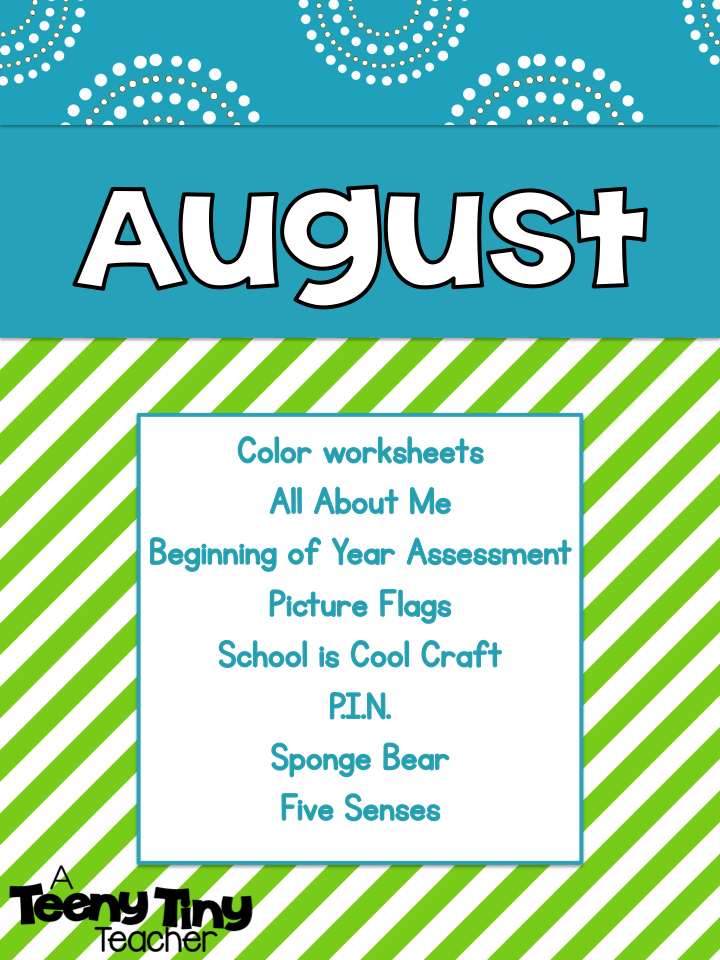 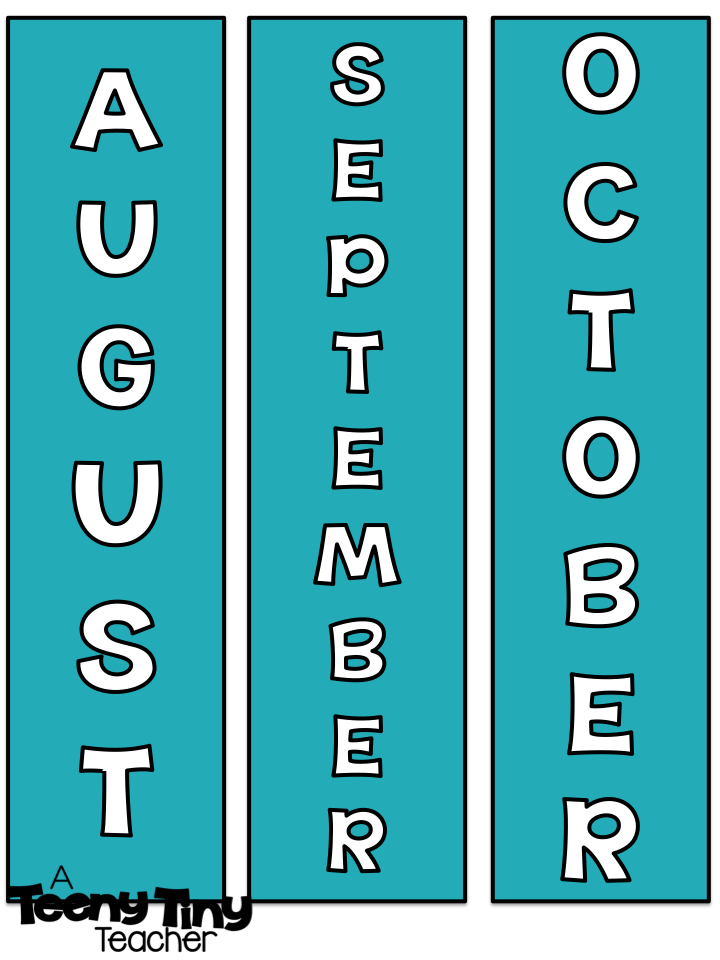 I opted for a simple look that matches my room decor . . . I played around with clipart for awhile and then decided against having clipart on each cover.
If you’d like to use these for yourself, I have an editable file for you {HERE}.
Then I think I took a nap because that was a lot.  I won’t tell you exactly how long I played around with clipart and digital papers.
But it was longer than necessary, I can tell you that.
Next, I set up my binders on our kitchen island. 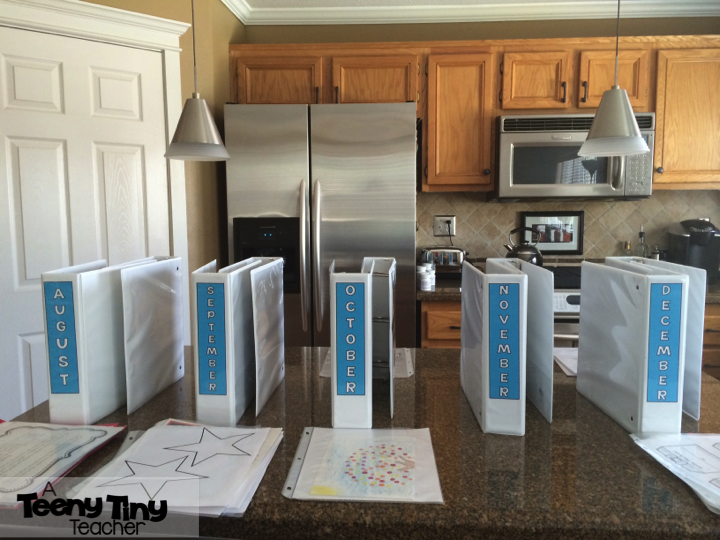 Front of my island. 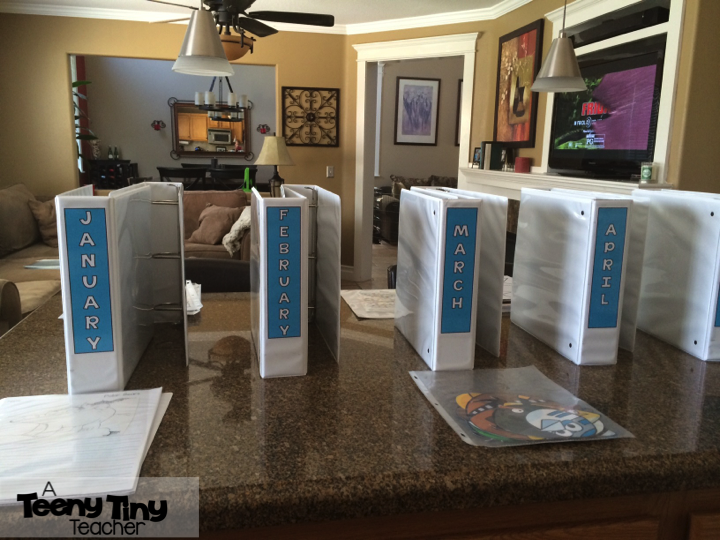 Back of my island.
I ran out of room and had to put the math, language arts, and center binders on the floor.
Then I set out to purge my files.  I had my hubby bring in one tub at a time from the garage.  I’m delicate you know.  And I think they weighed about fourteen tons, but I’m not good at math, so they might have weighed fifty tons for all I know.
My filing cabinet had been organized in alphabetical order.  So for example, in the A section you would have found American Symbols, ABCs, Antelopes and Aardvarks.  In the B section would have been Back to School, Bears, Bugs, and Blah Blah Blah.  You get the picture.  (and yes, I realize those examples aren’t actually in alphabetical order, thankyouverymuch)
I threw a ton of crap stuff away.  Almost five trash bags full. 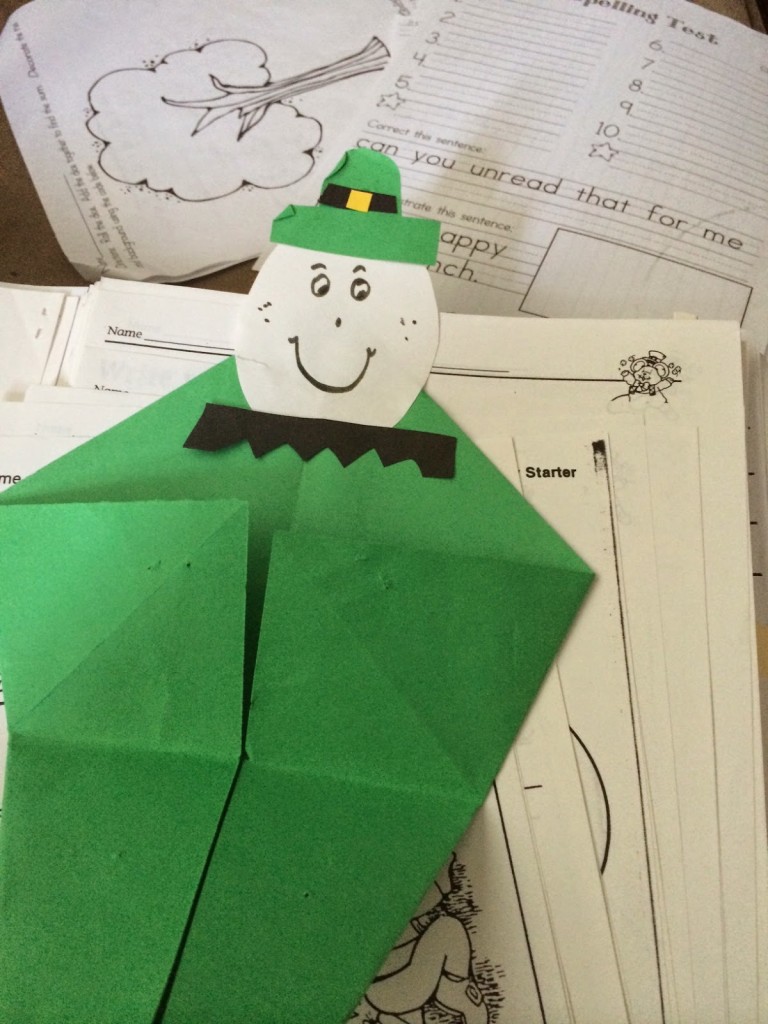 Gotcha!
This ugly thing went in the trash, obviously.  Reminder:  Do NOT pin this.
As I purged, I also pulled files out and put them into page protectors.  And then I put them next to the binder that I thought they belonged in.  For example, we always teach American Symbols in September because of September 11th (and we are not in school for the 4th of July).  So I made sure to put the page protectors with all of my American Symbols stuff next to the September binder that was set up on my kitchen island.
AND SO ON AND SO ON.
It took about three days total with lots of breaks.  I had to take a lot of breaks because I got overwhelmed and cried every once in awhile.
I kept apologizing to my husband for the big ole mess and he said, “What mess?”
True story. 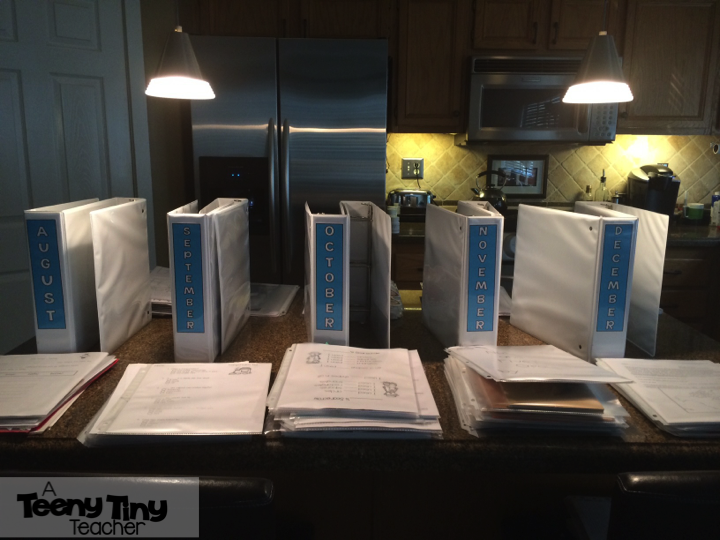 Making Progress.
But look!  It’s nighttime.
Waaaaaaa.
I will confess and admit to you again and again that I COMPLETELY REGRETTED STARTING THIS PROJECT AND I WANTED TO KILL MY FRIENDS HEATHER AND TRACI.
Oh, I kid.
Tee hee hee.  Or maybe just tee hee.
I am pretty sure that Traci puts every single piece of paper in its own page protector in each binder.
I did not.  Nor will I.
Number One:  I am cheap.
Number Two:  You know I’m lazy.
Number Three:  NOOOOOOOO.
So.  I used paper clips and shoved mini units into one page protector and bigger units were split up amongst three or four page protectors.  It’s however it worked out.  I figure I can adjust as the year goes by.  Cuz you know I’ll have time for adjusting DURING THE SCHOOL YEAR.  And adjusting while on summer vacation was a waste of my time, obviously.
Once I had everything next to its binder, I realized I needed sixteen million Language Arts binders, three million math binders, and about 4700 Center binders.
That’s another True Story.
I had to go buy more binders.  I had to split up Language Arts into different categories, such as Phonics, Grammar, Comprehension, etc. because I have so much of it.
AND SO ON AND SO ON.  Who’s bored?
Me, that’s who.
Last, I typed up a Contents page for the front of each binder, knowing that those will probably change as I buy more stuff on TpT and make more things, too.  Again, you know I’ll have time DURING THE SCHOOL YEAR to edit these content pages.   Of course.  All the time in the world. 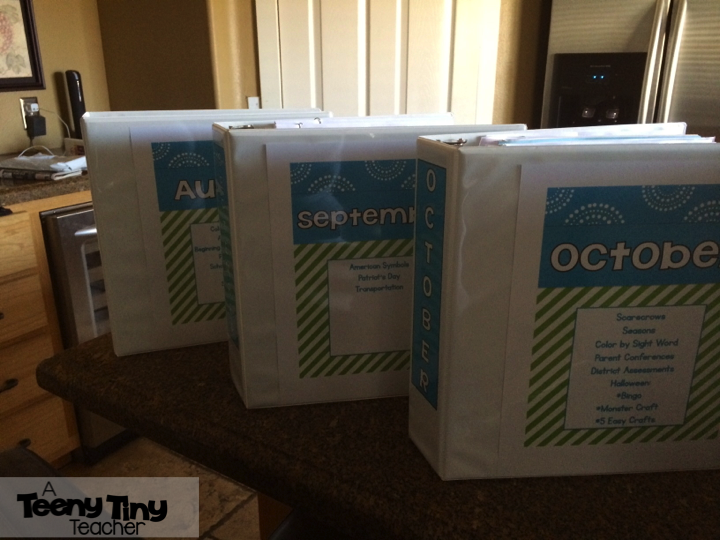 Finished.
Look how dark this picture is.
I think it was the middle of the night.
Most likely.
I’m sure I didn’t forget to put my flash on.
And that’s THE END.
I now have all of my files in binders.  And I plan on using my filing cabinet to house all of the endless amounts of curriculum workbook pages that I have for both Language Arts and Math.  That will free up space in my rolling cart for all of the binders that I now have.  Because I think I have 20.  Or so.
I am the happiest about my Language Arts binders because I am not going to tell you how many sets of rhyming cards I have made because I couldn’t find them under R.  Or L for Language Arts.  Or P for Phonics.  Or H for Houghton Mifflin Theme 6 Week 2.
Seriously.  I like to act like I’m organized but if you forget how you organized something, you are actually a HOT MESS.
Now I will know exactly where my rhyming cards are.
They are in my Phonics binder.
Or maybe my Picture Cards binder?
Hmmmm.
« Five for Fraturday
Lesson Plan Template »