So the other day, I shared this picture: 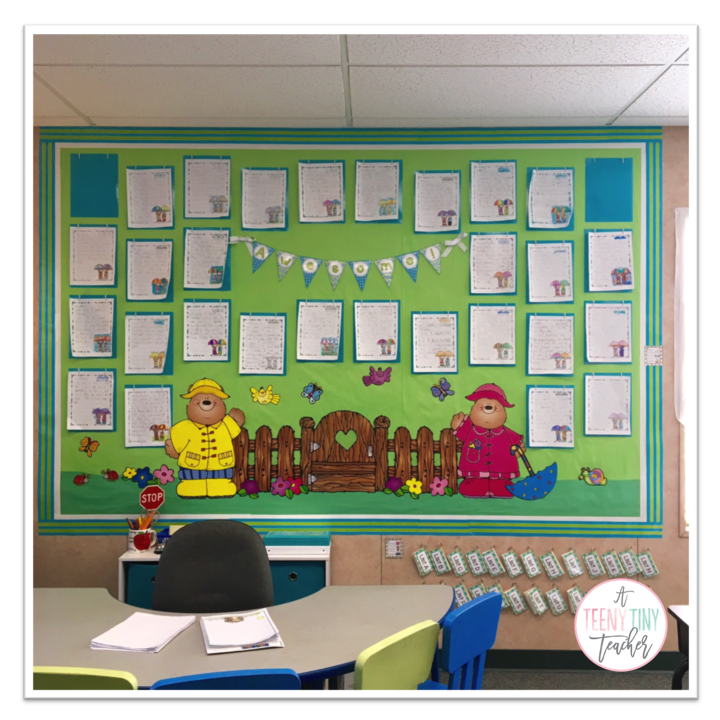 I would like to go on record and say that an aide (and not my regular aide, a SUB aide) hung these papers up, and it’s only slightly bothering me that some of them are not centered between the clothespins.

Just slightly.  And it’s the thought and effort that counts so I am thankful.

Just needed to go on the record.

I said I was prepping that bulletin board for Open House.

I did.  It’s prepped and ready to go.

But I don’t have our writing up yet so I thought I’d show you our other bulletin board that’s good to go. 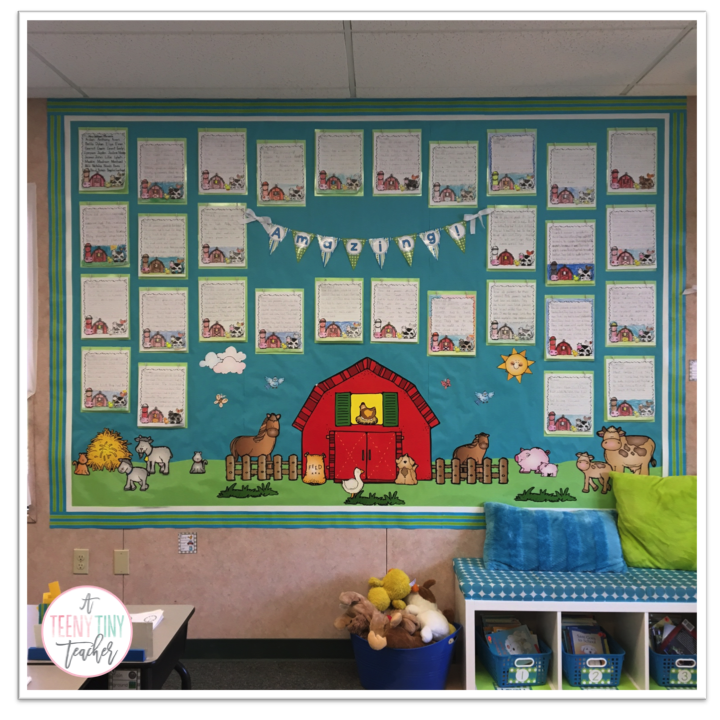 This board had ducks on it just the other day.

And instead of writing, it was artwork.  Parts of a plant artwork.

There it is.  We’re all set for Open House.

And it took me *almost* no time at all.

For example, for this particular bulletin board, I would have changed the borders.  It would most definitely have been some sort of farm border.  And because I’m Type A, and I can’t help it, and I have issues, changing the borders was not simply take this one down and slap the other one up.  Nope.

It was work, people.  It was exercise.  It was manual labor.

But was I done?

Don’t you see?  The farm is red so I would have to change out all of the background papers to red so it matched.  Again, it wasn’t simply take these papers down and slap red ones up instead.  Nope.  It also required a level.  And a stapler.  And a dangerous apparatus for me to stand on in order to reach the tall bits.

Think I was done then?

I changed out the title of the bulletin board.  Every single time.

I think at one time, I had a title for the farm bulletin board that said Down on the Farm.  And it wasn’t a banner.  Oh no.  It was INDIVIDUAL CUT-OUT LETTERS.  That I had to space out perfectly.  And get it centered.  And I would count the letters in the title, the spaces between the words, and divide by something in order to figure out where the center was.  But I’m not good at math and it actually sounds kind of silly now , but it’s true.  It was complicated, I knew I wouldn’t find the center the first time so I would use pushpins to tack up the letters, step down from the dangerous apparatus, check it, step back on, adjust, get down, check, etc.  And only when it was absolutely perfect would I staple them onto the board.

It was at least an hour and a half of work.

Every time.  For every bulletin board (I had three – now I have two).  Every six weeks or so.

And then my friend, Heather, had a brainstorm.  Because she did this insanity, too.  So did my friend, Laurie.  We all did this.  I’m telling you, it was a thing.

Heather suggested we stop doing it that way.

She suggested we pick a color scheme and stick to it.

She has a black, yellow, and white classroom.

I have teal, lime green, and white.

Here’s what I did.

TWO YEARS AGO, I put these bulletin boards up.  And I laminated (YES, LAMINATED for durability and long-lasting-ness) background papers.  And then I hot-glue-gunned clothespins to them.  (All Heather’s idea) 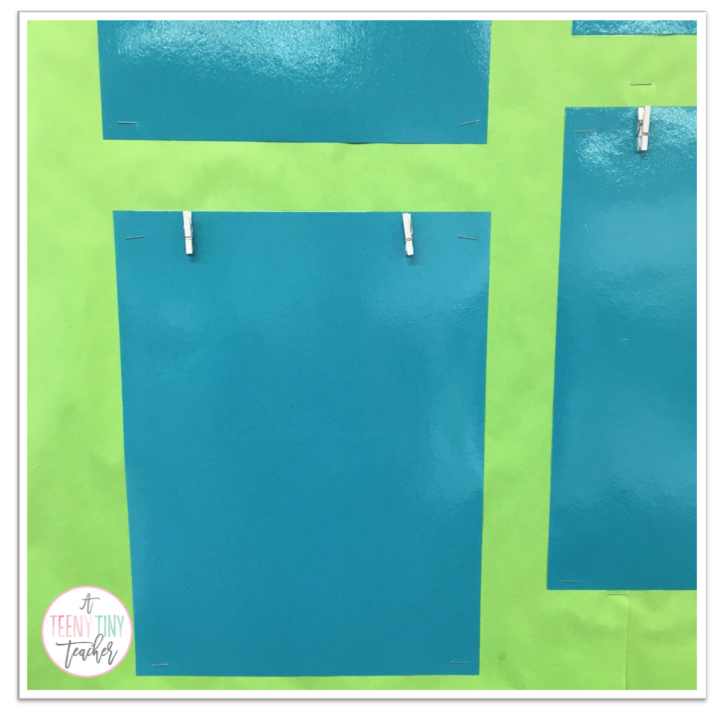 And two years ago, during the SUMMER, when I had oodles of time and boundless energy, and Pandora, and I was wearing yoga pants (which are all key for being as happy as one can be) I measured and leveled and stapled and used a series of ropes to swing from the ground to the ceiling in a Peter Pan type of way.

Okay, I made that last part up.  I still used dangerous apparatus in order to reach the high bits.

I have been essentially done for two years.

I just change out the cute-sy DJ Inkers stuff that I love (I just think they’re so cute and friendly and adorable – what can I say – I have issues) which takes no time at all because it doesn’t need leveling, and I just switch out the writing papers because it’s so easy with the clothespins.  And the title banner — well, it never changes.

Heather had this great idea to layer the borders with our accent colors.

You know.  Since we were only doing it the one time.  And it was summer, as I said. 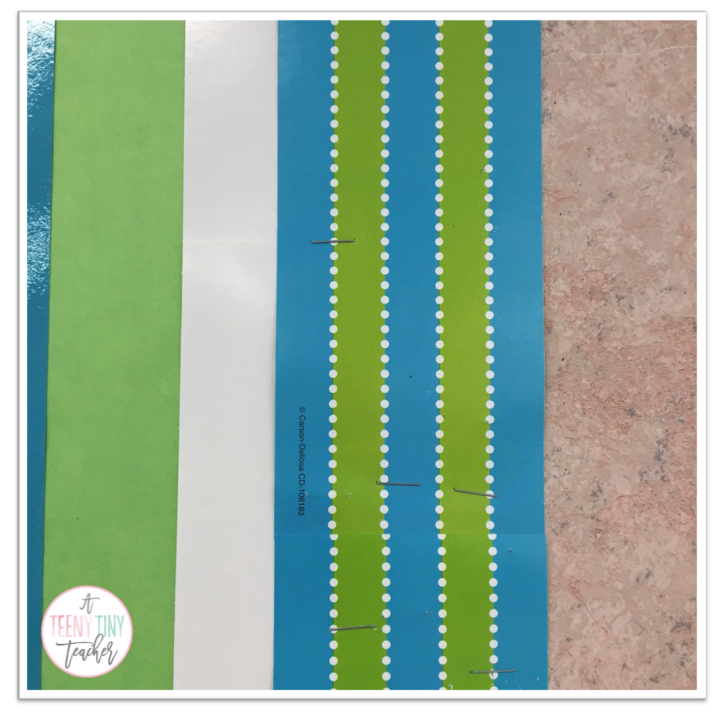 This was THE biggest pain of all and I shalt never do it again.

And, for whatever reason, the borders are not flat anymore.  They have started to waffle which, in turn, causes my eyes to twitch.  It’s like a reflex.

MUST FLATTEN ALL THE BORDERS.

So I may or may not do that this summer.

We’re getting new carpet and I hear the moisture from that can make all of the borders waffle anyway.

But . . . if you have lots of time and you’re as free as a bird and you’re still changing out your bulletin boards, and borders, and background papers, and titles . . . maybe this post is for you.

Also, I’m here to tell you that never, not once, did a bulletin board that was absolutely perfect teach one of my kids to read.  Not a one, I tell you.  It was the darnedest thing.