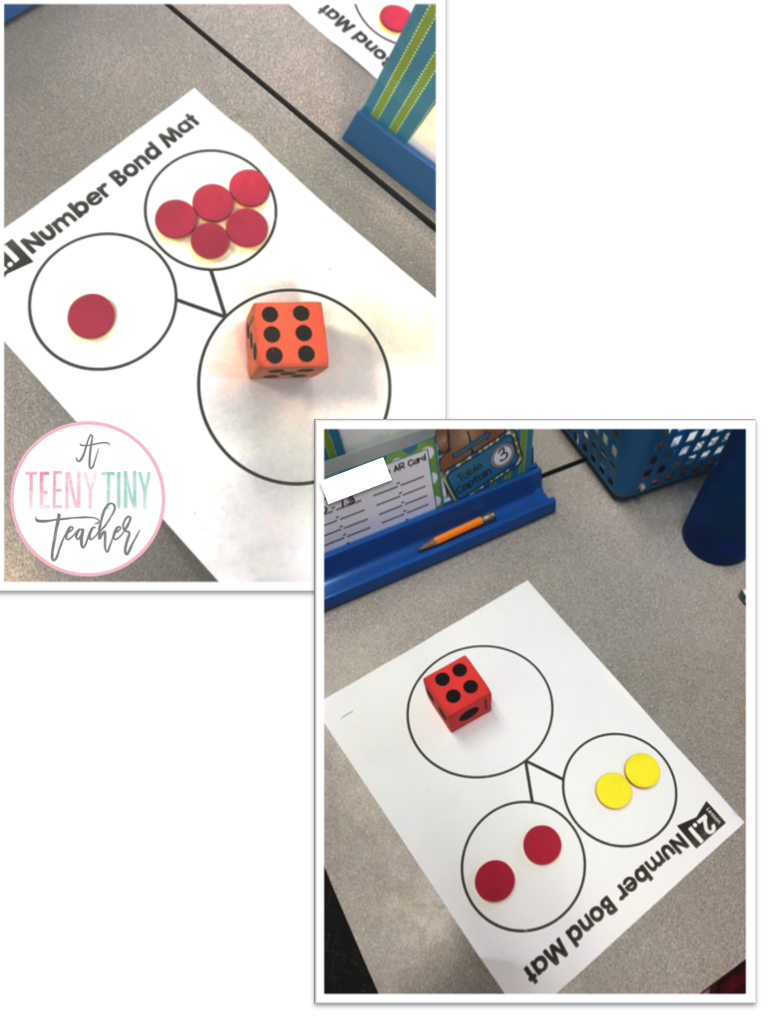 We had so much fun learning about Number Bonds this week!  We also call them Part/Part/Whole because that’s what my District Mandated Curriculum calls them.  But I supplemented Tara’s FirstieMath because IT MADE MORE SENSE.

IT MADE A LOT MORE SENSE.

To get into how I feel about the District Mandated Math Curriculum would mean I might yell and scream and say things like have these people never taught little six year olds before, do they not understand there’s a sequence in how we should do things for their little six year old brains, do they understand children BUT AT ALL?!

But I am calm and as cool as a cucumber on this nice Saturday morning, in my office, drinking my delicious coffee, so I won’t get into how I actually feel about it.

Instead, I will tell you that teaching Part/Part/Whole with dice and counters was just about the easiest and smartest way I’ve ever taught the concept before in my life, thank you very much, Tara.

During my mini lesson, we discussed that the whole number went in the BIG circle because it’s the WHOLE number and it’s the BIGGEST.  And then we discussed that the smaller circles were for the parts.  It also didn’t matter which direction their mat was facing.  It could be right side up, sideways, or upside down.  As long as they were aware that the whole number went into the big circle!

I modeled rolling the dice.  Placing it in the whole.

And then using counters to show the parts different ways.

PEOPLE!  THIS IS WHERE THE MAGIC HAPPENED.  Because the kids could LITERALLY SEE THE DOTS ON THE DICE WHICH THEN ALLOWED THEM TO MAKE THE PARTS IF THEY WERE STRUGGLING.

DO YOU SEE WHAT I AM SAYING?

And then the clouds parted and the violins began playing . . . as puppy dogs ran with unicorns under beautiful rainbows.

I only had two students not get it the first time around so I was able to help them during our guided math rotations.

Between Tara’s FirstieMath and Reagan’s Guided Math, I am ALL SET.  I’m still working out all of the kinks in guided math, but I am doing it and that’s all that matters.  My kids cheer every time I say we’re going to do two rounds of math groups today.  Or three rounds of math groups today.  That’s all I’ve done in one day.  Three.  And I’m telling myself that’s okay.  Because it is. 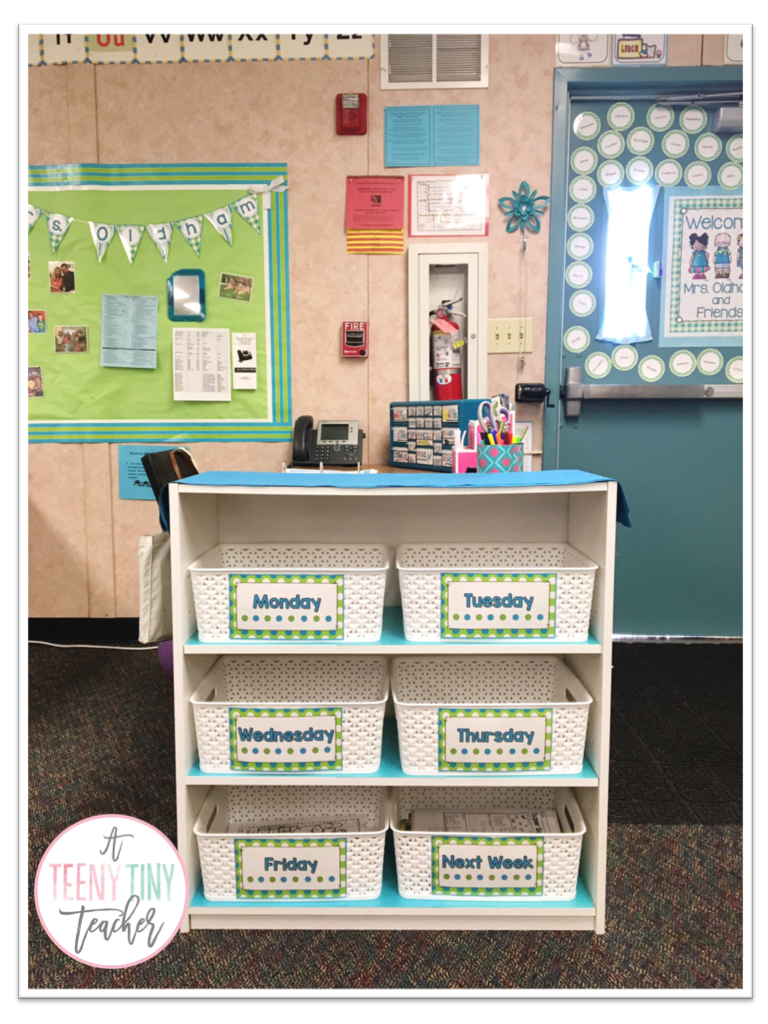 This is a new area in my room.

I’ve had it since day one this year and IT IS SAVING MY LIFE!

I’ve always had a Monday – Friday situation . . . except I kept them in my big desk drawer in hanging file folders.

For years I did this.

Because I am a creature of habit and change is hard for me.

Hanging file folders only hang so much.

And when they can’t hang any more, they buckle under the weight of the stuff and then they sag, fall off, or break.

And then all your organized stuff slips out the side.

And then you can’t find that one rhyming card for boat for your rhyming lesson and even though you pull everything out, you still can’t find it, and you’d like to scream, but the children are watching so you just smile and grit your teeth and think I’m going to Panera for lunch today and getting macaroni and cheese because the tuna and whole-wheat crackers I packed is not going to do it for me today.  And I’m adding a 99 cent bakery treat.

My teammate, Heather, suggested this new Monday – Friday situation and I about fell over.

But then I was worried about where to put all the baskets because I don’t like clutter and I need everything just so.

And then when she moved her bookshelf (which I had also – the exact one because I copied her) to the end of her desk and the Target baskets (which wipe off even though they look like they’re made of wicker or weaving fabric or whathaveyou material) fit ABSOLUTELY PERFECTLY PERFECT, I said THIS IS AWESOME AND I AM COPYING YOU AGAIN.  I ran out to Target, bought the new baskets, lined my bookshelves with turquoise construction paper and DID IT.

The best thing about these baskets???

They have handles on the sides.

Then I carry the one that I need for the day to the carpet area and I am all set.

So, not to brag or anything, or toot my horn or anything . . . but TOOT TOOT!

One of my ideas was featured in an educator’s magazine!

It’s not People or In Touch, but it *IS* a magazine!  Even if I had never heard about it until they contacted me.

And, bonus!  It’s a Texas magazine and I used to live there, and Kerry lives there now, and I love Texas!  🙂 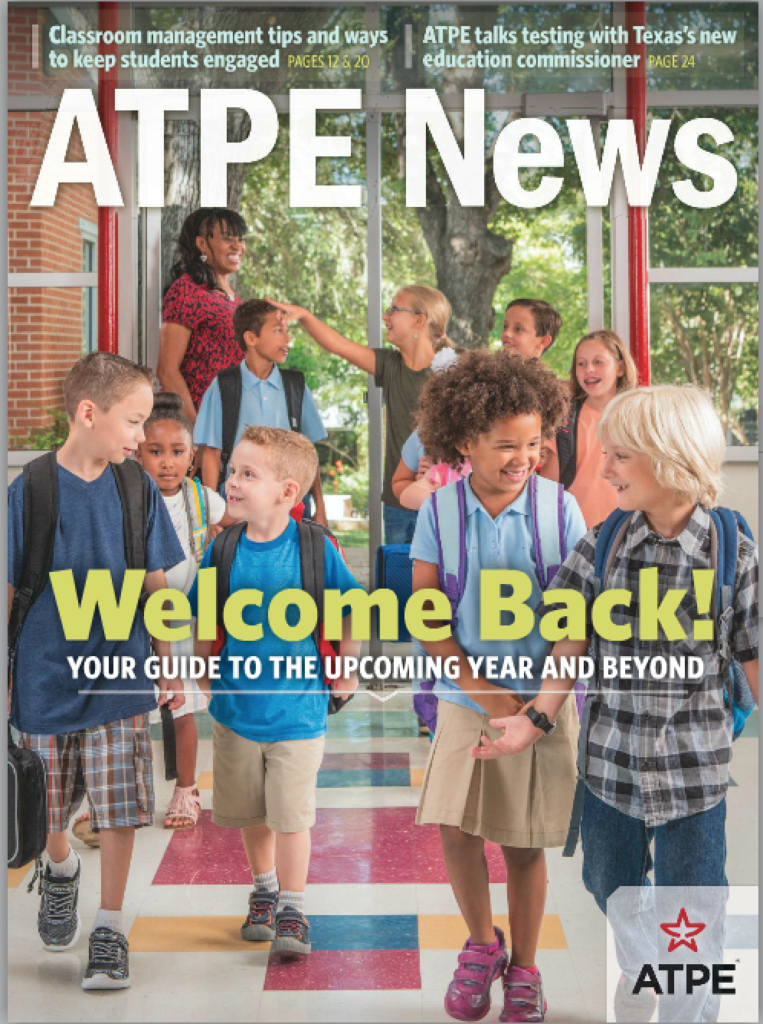 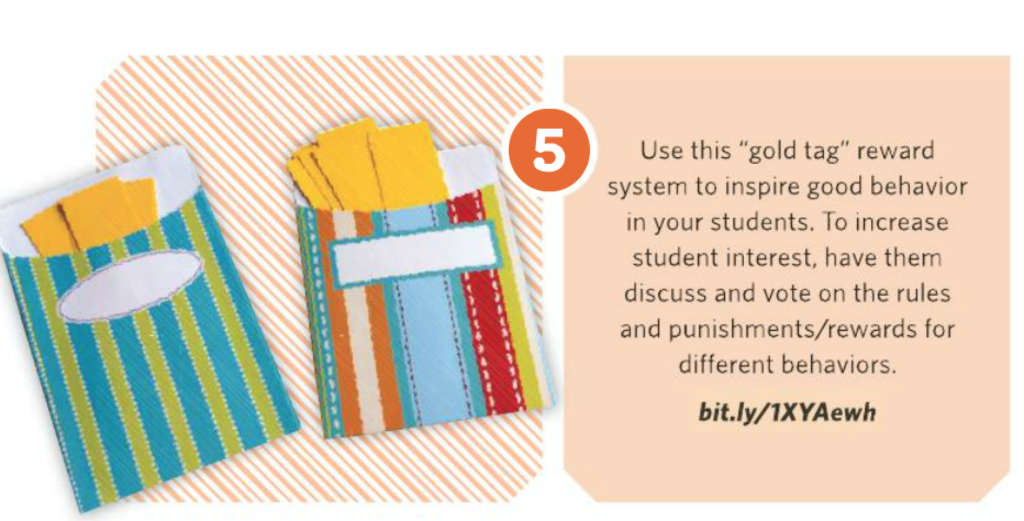 I would love to be able to tell you how or where you can buy this magazine, but I don’t really know.

And, if you’re looking for some classroom management ideas, {HERE} is the one that they featured!  I keep thinking I need to do a Facebook Live about gold tags . . . but I’ve never done a Facebook Live so then I freak out. 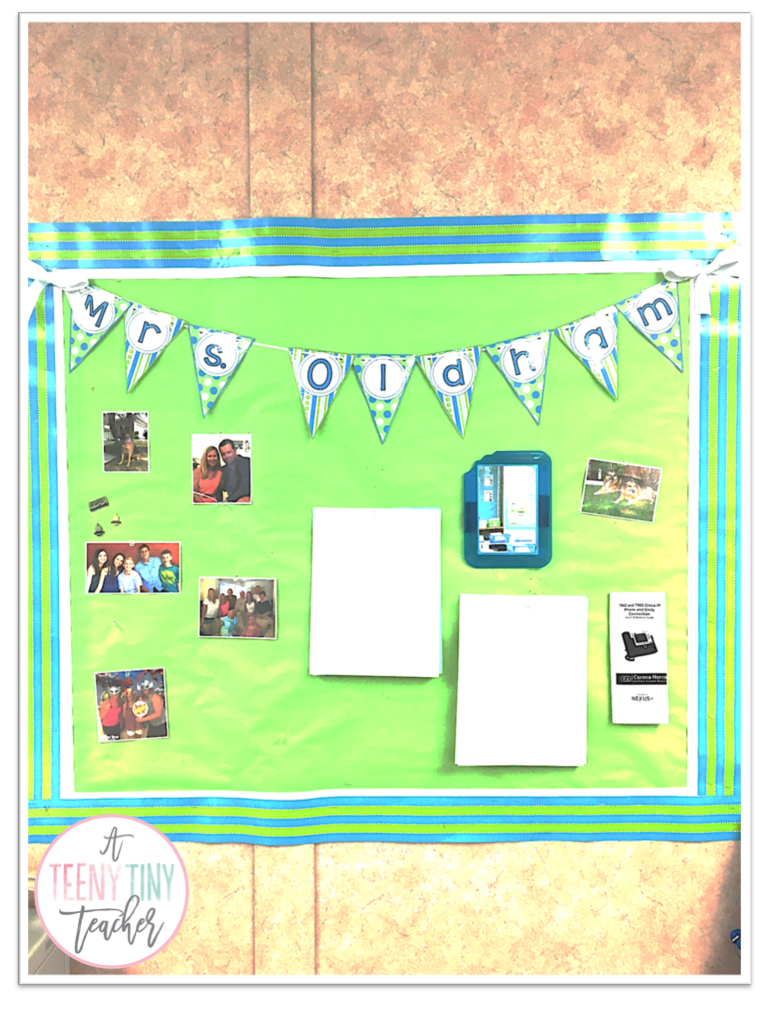 This is my “teacher” bulletin board.  I had to cover up some important school information that you’re not allowed to see, such as phone numbers and such before I took the picture.  But this is right near my desk.

And it was a little off center for a couple of years.

Every year, I told myself to move it over because it really bugged me.

I finally did it the day before school started this year.

There was a tiny problem. 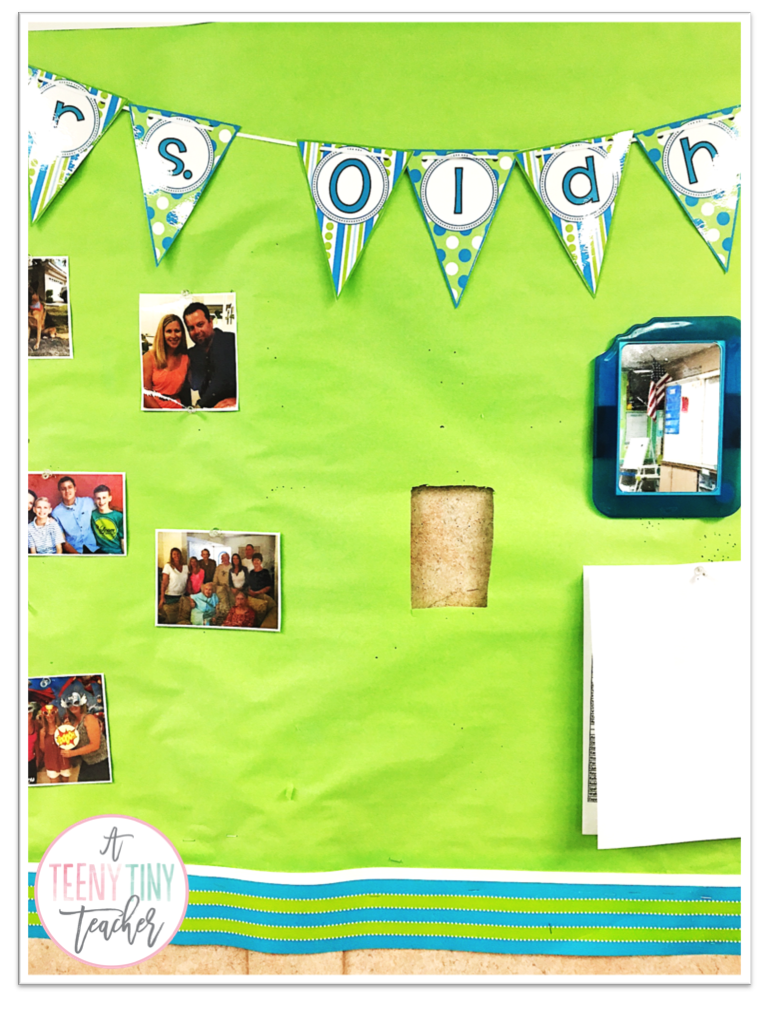 And I kept it!

I kept the hole!

Because it was the day before school started and we had no lime green butcher paper in our teacher’s lounge.  So I just kept the hole and covered it up with important info.

But the other day, the important info fell off.

I don’t know how because it was up there with a pushpin.  The pushpin fell out (HOW DOES THAT EVEN HAPPEN) AND BAM!  There was the hole.

I cracked myself up.

I had forgotten that I even had a hole there because it was the day before school started and I was running around like a madwoman and not really present.

I like things a certain way.  I’m all about being tidy and organized.  I just come that way.

However, there is a side of me like Monica on Friends with the secret closet.

Don’t open any drawers or cupboards.

Or look behind any butcher paper. 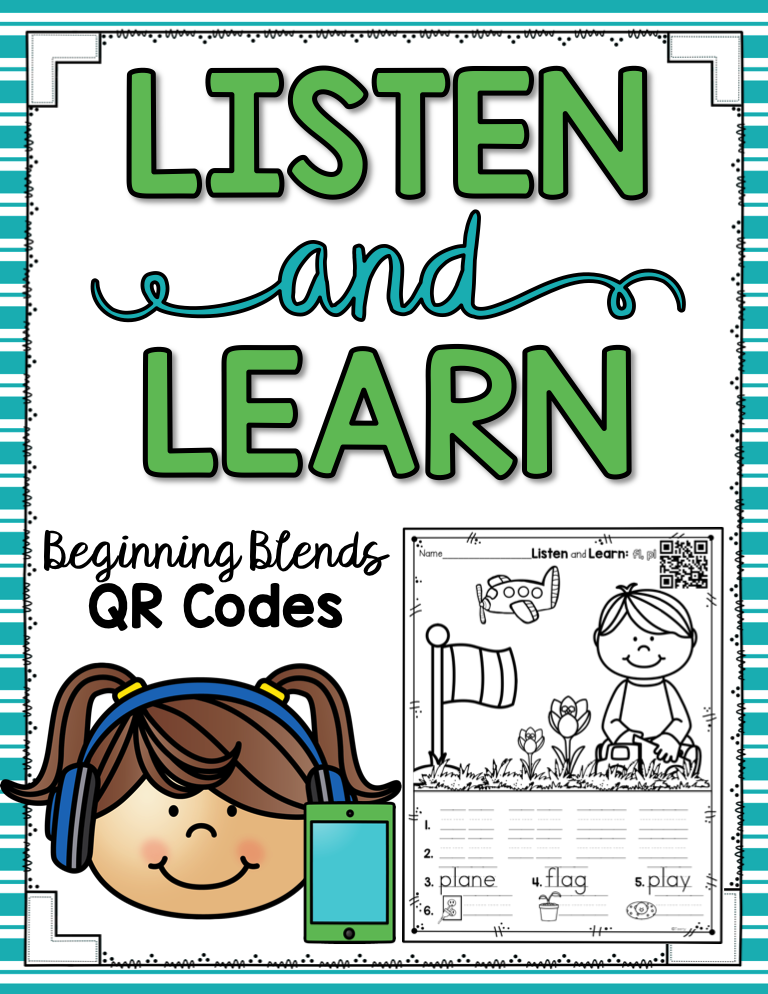 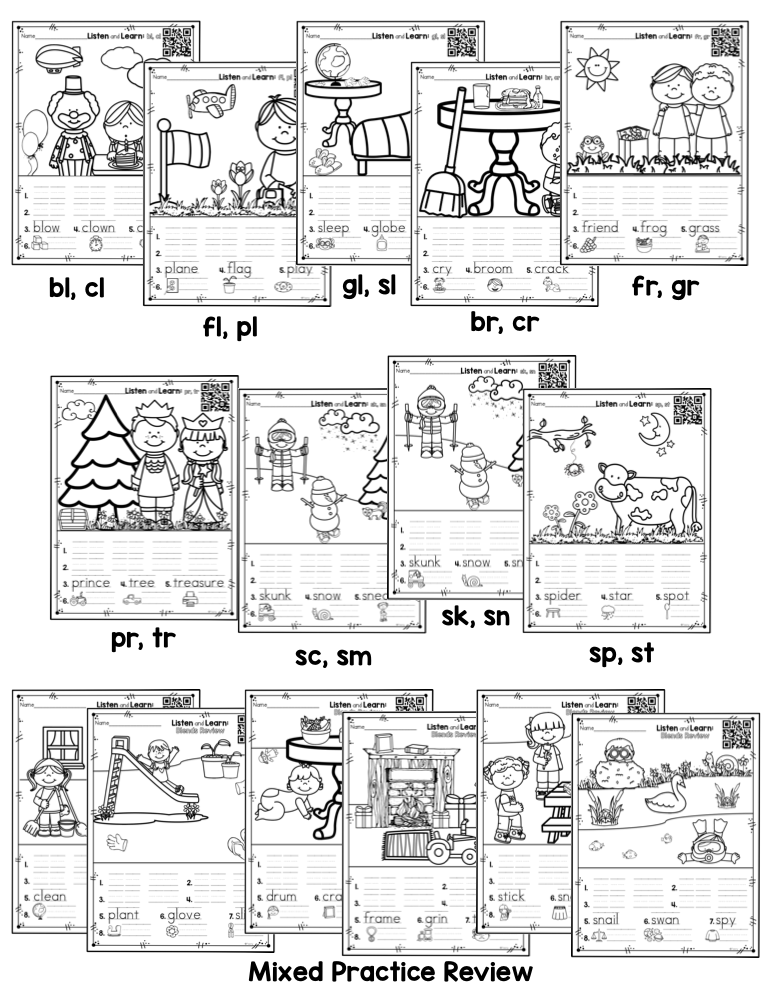 These activities are 15-17 minutes of guided phonics instruction BY ME!  My kids LOVE them!

It’s seriously so nice to have them because it’s like I cloned myself in the classroom.  I’ll be working with a group LIVE and another group is listening to me on the QR code.  It’s awesome!

Some people have told me that their district blocks Audio Boom (the website that hosts my QR codes) and they are inquiring about whether or not I can have these activities available in a different format.  I’m working on it!  I hope I find a solution!  I’ll keep you posted!

And that’s it for me today!!

Happy Saturday and have a great weekend!