I have been without the internet all day.
I barely survived but reruns of The Atlanta Housewives saved me.
So I apologize for the delay in telling you the winners of the giveaway: 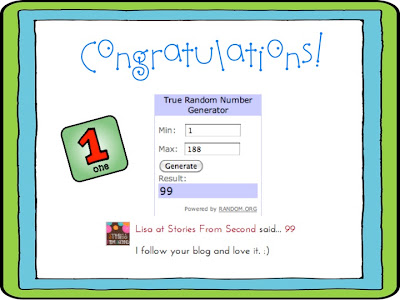 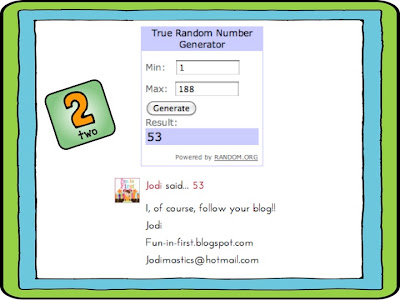 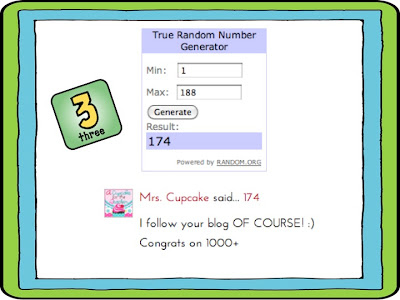 Thanks to everyone who entered.  As soon as Amazon starts having 5 cent gift cards, I’ll make everyone a winner.  🙂

From reading through all of the comments, it seems to me as if teachers enjoy staying home on New Year’s Eve with family, friends, and lots of food (well, with the exception of Jennifer over at First Grade Blue Skies.  She had a NYE in which she lost a shoe and a shirt and maybe something else . . . but she says she’s not allowed to talk about it.  I am thinking, “Wow!  Why wouldn’t she blog about it?”  Or is that just me?).  Anyways, it’s no wonder I like you guys so much.

We had two couples, one single guy, one married girl (whose husband was out of town), and one three year old over here at our house.

Hubby made yummy food AND did the dishes.  I know!!!  BEST New Year’s EVER! 🙂

One of our friends, Lauren (you can find her HERE) brought over NYE kits for each of us.  She was inspired by these two blogs:  Dandee and Run, Lucas, Run.  I LOVED IT.  We each wrote a letter to ourselves and some hopes for next year (things we want to try, and read, and eat and visit —- let’s see.  Um, I would like to try to eat sushi without gagging, and I would like to visit a place without my couch and learn to be happy about it).  We toasted with mini bottles of champagne and the idea is that you put the letter back into the bottle, seal it up, and put it someplace safe.  Next year, we’ll read them!

We did this while sitting out by our fire pit.  Yes, that’s right.  We have a fire pit.  It is the poor man’s pool and jacuzzi.  The best thing about it is that you don’t have to get into a swimsuit.

The kit had some noise blowers and confetti, too, but three of us felt compelled to grab pots and pans and run out into the front yard to make it fun for the three year old.  Except the three year old didn’t come out with us.  And we may have forgotten to tell him that we were doing it.

So now it’s the new year.  Isn’t that crazy?

And I feel terrible for those of you who had to go back to school today.  Cruel and unusual punishment, if you ask me.

And for those of you who have to go back tomorrow . . . especially Hadar, I wish you quiet classrooms, well behaved kiddos, and delicious coffee (sans Kahlua) to start your morning.

I, on the other hand, have another week off.  Before you start hating me, just remember that these are Furlough Days and I am technically not getting paid.

Okay, okay, okay!!!  I know!  It’s so unfair to all of you!  And the paycut doesn’t matter at this point because I’m used to it and who cares about a good credit score, anyway?!  I HAVE ANOTHER WEEK OFF!  🙂

The Bachelor premieres tonight.  I’m not a fan of Ben’s.  I mean, I think he is a nice enough guy and all that, but I don’t think he should be the bachelor.  But yes, I’ll watch.  And then we’ll talk about it.  And I would say I should start something on Tuesdays like “Talk About It Tuesdays” or something but I won’t be able to keep that up. Because the housewives in the BH are also on tonight and . . . dun dun dun (sound effects) . . . Taylor says her marriage is over.  O-V-E-R.  Although we could still talk about it on Tuesdays . . . but I’d rather not commit to that in case I have to do any TiVo catching up later in the week due to the fact that I have a semi life that doesn’t involve TV.  For example, I work.  And I eat.  And I read.   Occasionally, I read blogs.  But not enough that my hubs says to get off my computer or he’s going to take it away and hide it from me because he wants to spend time with me wherein I am actually looking in his eyes while he is talking.

So no Talk About It Tuesdays.  But we’ll talk.  I promise.