Hello!!  Happy Saturday!  Happy Saturday of ANOTHER THREE DAY WEEKEND!!  I know some schools get a four-day weekend for Presidents Day (a Friday and a Monday) but I have to say that I am a fan of how we do it.  I’m not good at math, but two long weekends just work out better in my brain.  🙂 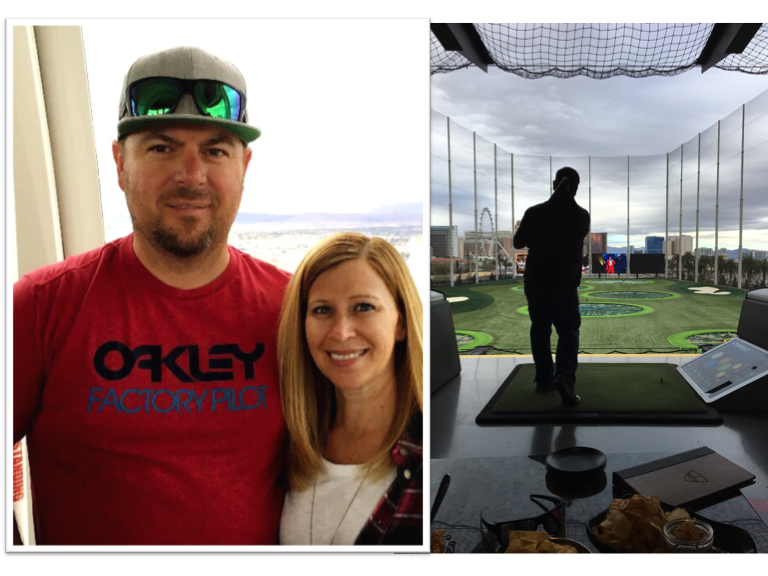 Last weekend, Steve and I flew to Vegas to meet up with his brother and sister-in-law.  We flew out after school on Friday and came back on Monday.  We had THE BEST time doing absolutely nothing.

We didn’t even gamble.

I know.  We are weird.  But we are fine with that.

What we did mostly was EAT.  We finished our detox/cleanse thing and so we ate.  Lots and lots of yummy food was consumed by us.  I ate a lot of truffle fries and truffle chips and anything truffle chocolate.  What is a truffle?  I seriously have no idea but it makes everything taste delicious, I’ll tell you that.

We went on the big Las Vegas Ferris Wheel (I think it’s called the eye, I don’t know, I just got on and stood there) which was interesting.  We went in a High Roller one which means there was a bartender and about fifty other people all crammed into a small space.  I think Ferris Wheel is the wrong word because it’s not like a ride at all.  You just stand there and have something to drink (and wine was not a choice so I had nothing) and look at the scenery, but it was so crowded, you ended up talking to strangers instead.  At least, that’s what we did.  Steve and I will talk to anyone.  I think his brother and sister in law thought we were nuts.

They liked to gamble so we would split up every now and again which gave Steve and I the opportunity to go to our hotel room and do absolutely nothing which is our favorite thing to do.

We had dinner reservations on Saturday and Sunday at 9pm.

In my normal, non-Vegas life, I’m in bed reading or watching TV at 9pm.

So feel free to call me a Party Animal.

Oh, and we also went to Top Golf (which I’ve been to in Texas with Kerry and her family) and Steve and his brother golfed while I ate yummy food and caught up on social media.  His sister in law was in a poker tournament so I didn’t even have to share the couch or the food.

I think I had the most fun out of anyone. 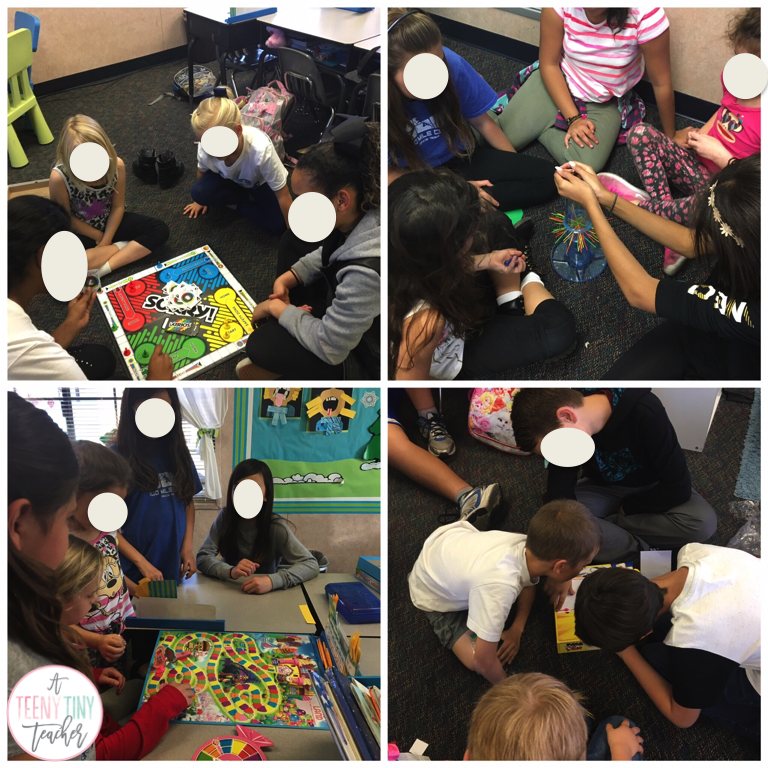 Tuesday was Valentine’s Day, and as I already said, we had our parties on the Friday before.  I was so so so happy knowing I didn’t have to face a party on a Tuesday (which was really our Monday).  We did get together with our Big Buddies on Valentine’s Day, though.  My Big Buddy teacher happens to have her daughter in my class, and her daughter (my first grader) came up with the activity for us.

She suggested that we have a Game Day.

And, people, when you have a game day, there is nothing to prep for your Big Buddy day.  Nothing!

I sent out an email to a few parents and asked them to send in a couple of games.  I didn’t ask every student to bring a game because then you have everyone wanting to play their own game and no one wanting to play with each other, plus the sixth graders were also bringing games so it just made sense in my head to have a few games to choose from and not 30 games to choose from, plus the sixth grader games.

Sometimes, I use my noggin and it works well.

Game Day with our big buddies was a huge success.  I’m not even kidding.  Nothing to prep?  Check.  Big Buddies to help the first graders?  Check.  Fun had by all?  Check.

I highly recommend it. 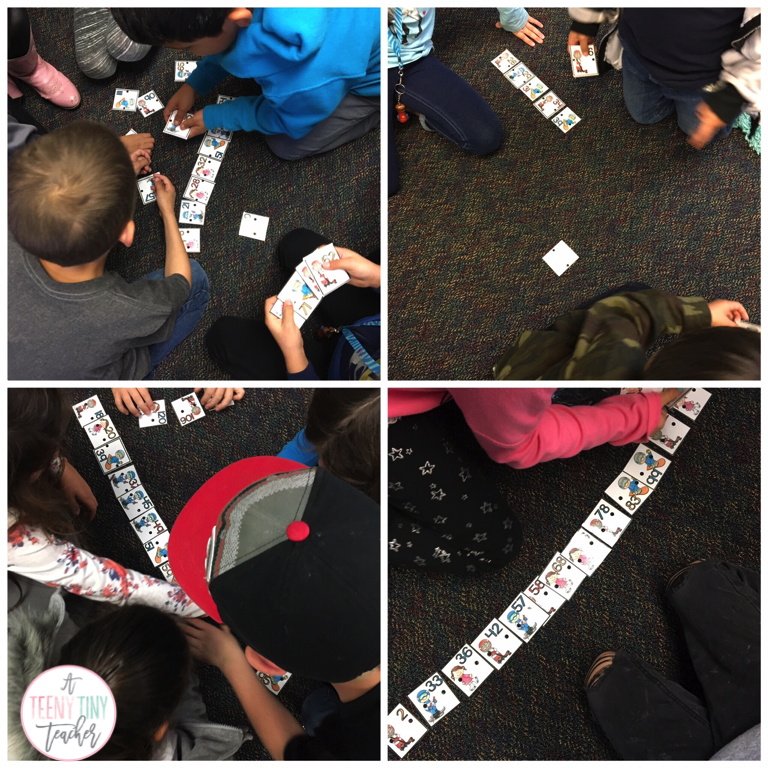 We are working on numbers to 120 and ordering and comparing numbers right now.  I have these handy dandy number cards from Marsha at A Differentiated Kindergarten that we use in centers.  I wrote a post all about it that you can read {HERE} because I learned all about how to use my link-its correctly from Marsha and now I am a changed woman.

So now I have number cards A-PLENTY.  Two hundred and forty, if you’re counting.

Luckily, I found both sets of number cards during my lunch yesterday because I just whipped up a math lesson idea in my head when one of my kids was telling me a story about the video game that he plays after school and how he beat level such and such and how this bad guy tries to do this so you have to do that and how it’s tricky . . . his story went on and on so I had plenty of time to think of how to spruce up my math lesson while appearing to be a good listener.  😉

I put twenty or so cards in a baggie for each table group and they had to work in teams to order them correctly from least to greatest.  Even after showing this in a pocket chart, and showing how the numbers will NOT be in a row, as in 42, 43, 44, but will  have missing numbers, such as 54, 62, 73 . . . I had every table group come tell me they were missing numbers.

We had to come back to the carpet.

Once they *mostly* understood, they went back and tried again.

Four table groups worked extremely well together and one table group gave up.

Supposedly, someone was being bossy even though I said I’m the big boss and they’re not.

They finally got it. 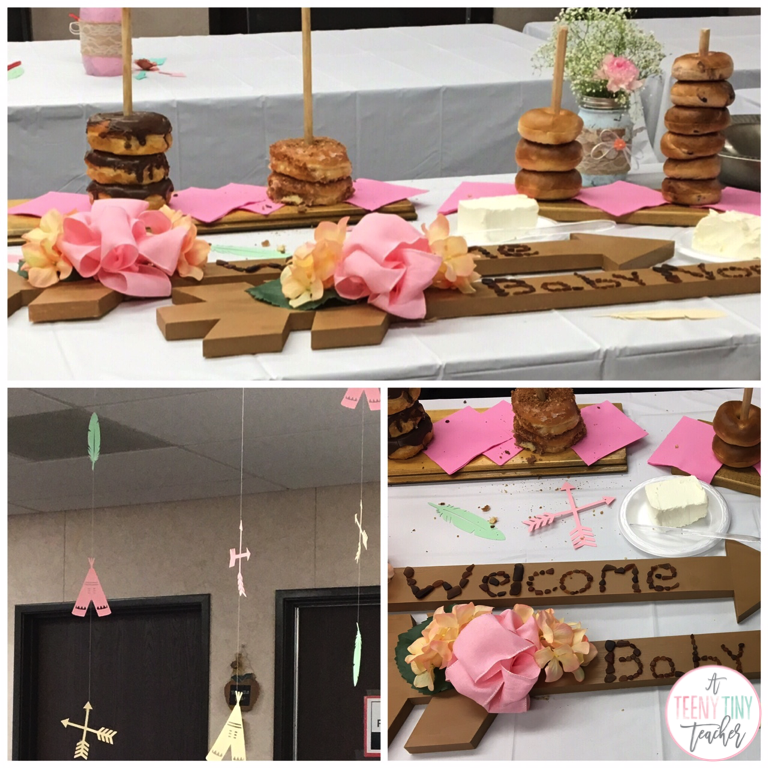 Friday morning, we had a baby shower for one of our teachers, Jessica, and it was so sweet!  She teaches our special day class (1st – 3rd) so the special ed team hosted it.  They did an amazing job with the decorations and the food.  Donut towers?  Bagel towers?  Come to mama.

Jessica is so so so sweet and adorable!  She works so hard for her kids!  She also reads my blog so hello, Jessica!!  I’m so happy for you!  🙂

I was a little confused by the teepees.  Apparently, they’re the “new” thing, but I had no idea.

A couple of people told me they’re the new thing.

But I still don’t get it. 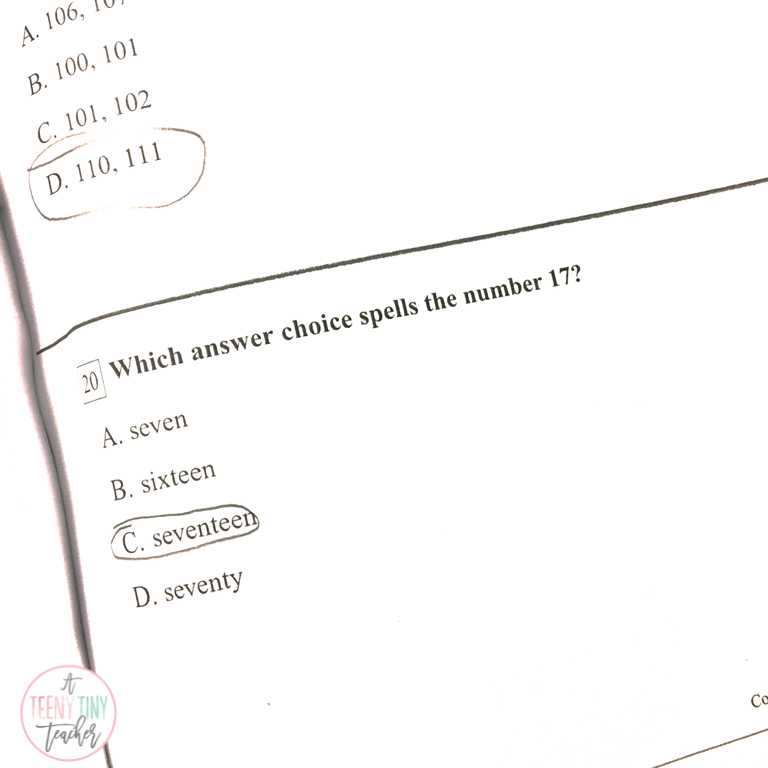 We had District Assessments this week.

Our math assessment was 21 questions.  That’s a lot less than in the past so thank goodness for that.  I passed out Math Pills to everyone so that we would all do well.  Math Pills are safe, chewable, and FDA approved.  Each one comes with an M printed on it so you know they’re for math.

You can get them almost anywhere.

My kids seem to think they’re plain m&ms, but I assure you they are Math Pills.

So anyways, we’re taking this math test of which a couple of questions actually said Read this next question to yourself and solve which made me want to throw a big ole hissy fit because it is a MATH TEST and now my struggling reader who is amazing in math is going to get it wrong because he can’t read what it is asking him to do AND DO YOU SEE WHY I WANTED TO HAVE A TEMPER TANTRUM?

Do you see number 20 in the picture?

It says Which answer choice spells the number 17?

I’m pretty sure smoke and fire came out of my ears and that my head exploded, but all my kids saw and heard was me reading the question in the most fake, sing-song-y voice that I had which made a couple of them ask me if I was okay.

Because this is a math test.

Not a spelling test.

But I guess, in the big picture, if I’m thinking clearly, it is just as important to be able to spell the number seventeen as it is to find a near double, make ten, decompose it, write an addition sentence, write a subtraction sentence, count to it, subtract from it, write it, etc.

I needed SEVERAL math pills after that.