Happy Sunday with a Monday holiday!

It just sort of changes the feeling of Sunday when you get the next day off, don’t ya think?  Instead of thinking about what I’m going to wear or pack for a lunch or procrastinating on all of the stuff in my school bag and the bottom of my cart, I’m thinking about . . . hmmm . . . well, nothing at all.

Okay, that’s not entirely true because I am the type of person who can’t turn her brain off.  It’s really quite annoying.

So, as someone who can’t turn her brain off, I’m going to tell you a little story.

Once upon a time when I was very young and just starting out, I bought a bunch of math manipulatives for my classroom.

Cubes, pattern blocks, counters, tens and ones, you know . . . all good stuff for learning math.

And I also bought these: 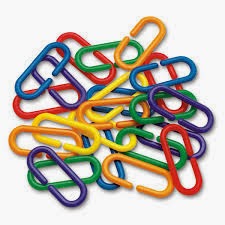 Because they were right alongside the cubes and pattern blocks and other math stuff.  So I assumed they were for math.  I call them link-its.  You might call them chains.  Either or.
Except, well, um, besides counting them, what exactly are they for?
Let me tell you.
During Fun Friday, your kids will use their imagination and they will play Doggie.  To play Doggie, one student is the dog and another student makes a collar and leash out of the link-its.  And then, when you’re not looking, the kid that is the doggie puts the link-it collar on and is led around the classroom by the other kid.  Don’t worry, it’s safe.  The collar is loose enough that it’s not a choker.  I think.  And you’ll figure out what they’re doing soon enough when you hear barking and then you’ll put a stop to it because it’s sort of dangerous to have link-its or chains around people’s necks.  Unless, of course, it’s a necklace.
Which brings me to the other game your kids might play during Fun Friday with the link-its.  They will play King and Queen and wear crowns, necklaces, bracelets, and big ole rings.
This is actually a phenomenon.  I don’t introduce or model these games and they are played every single year.  See?  Phenomenon.
Just for Fun Friday, mind you.  Not during Literacy Centers or anything like that . . . I do have standards.  Common Core, to be exact.
So anywho, this has been going on for years and years because I’m as old as the hills and beyond.
And then.
I was perusing blogs and such and came across this post from A Differentiated Kindergarten.  Marsha is a genius.
Look what she is doing with her link-its. 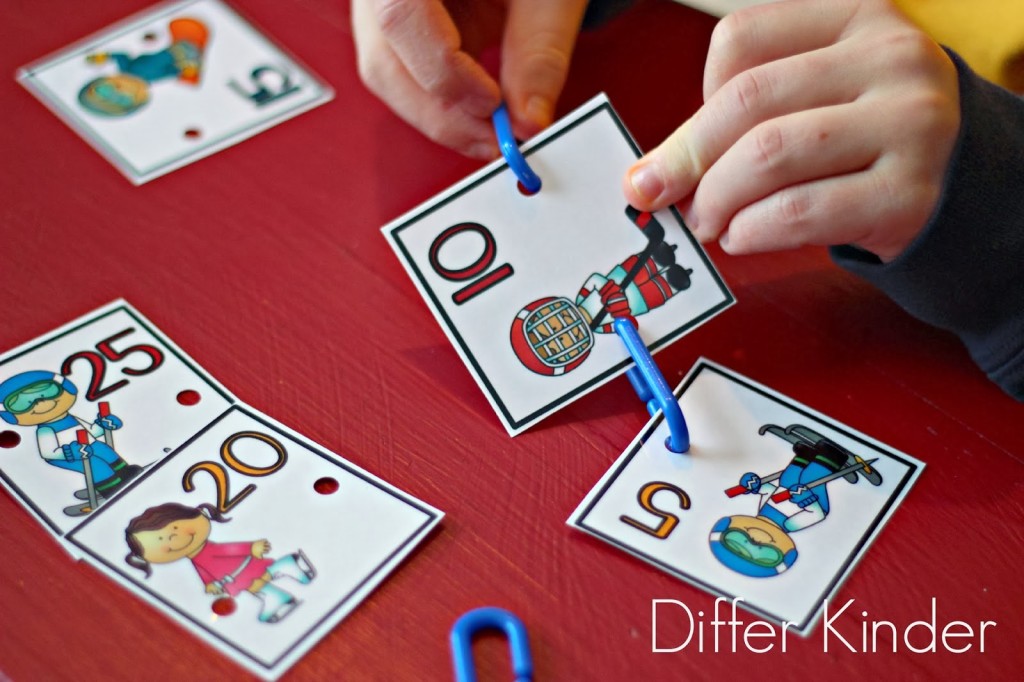 HELLO?!!!!
Are you dying?
Her kids are linking together number cards and counting by fives!  They can also count by 2s or 10s or 1s or whatever you want!
HELLO?!!!!
Marsha also has cards with letters on them – for linking the ABCs in order, spelling out sight words, etc, etc, etc!
I introduced it this week in Centers. 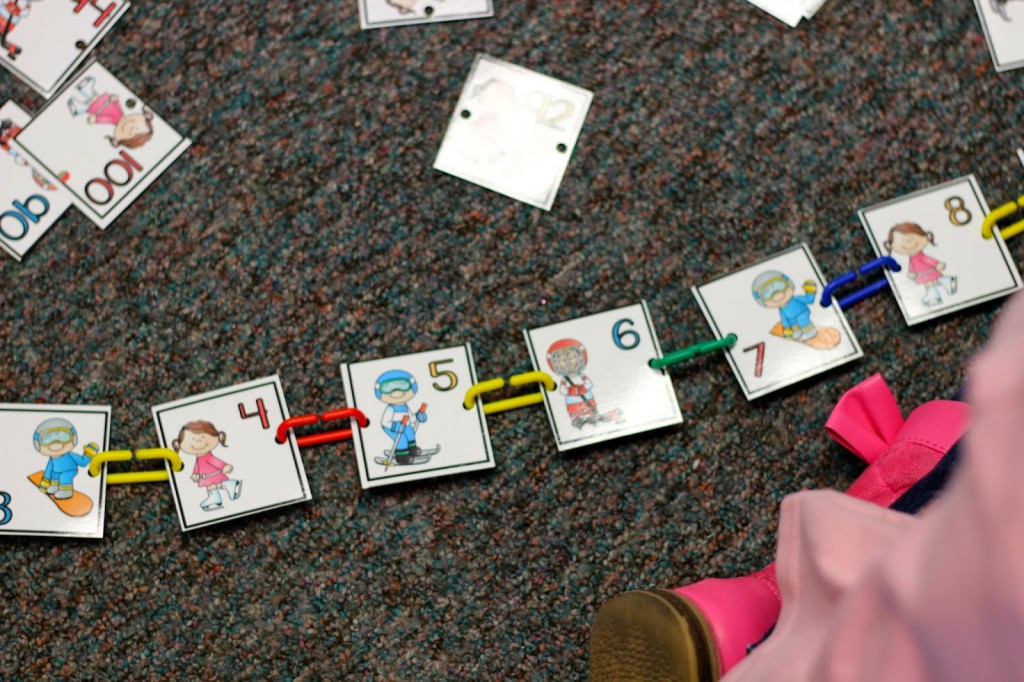 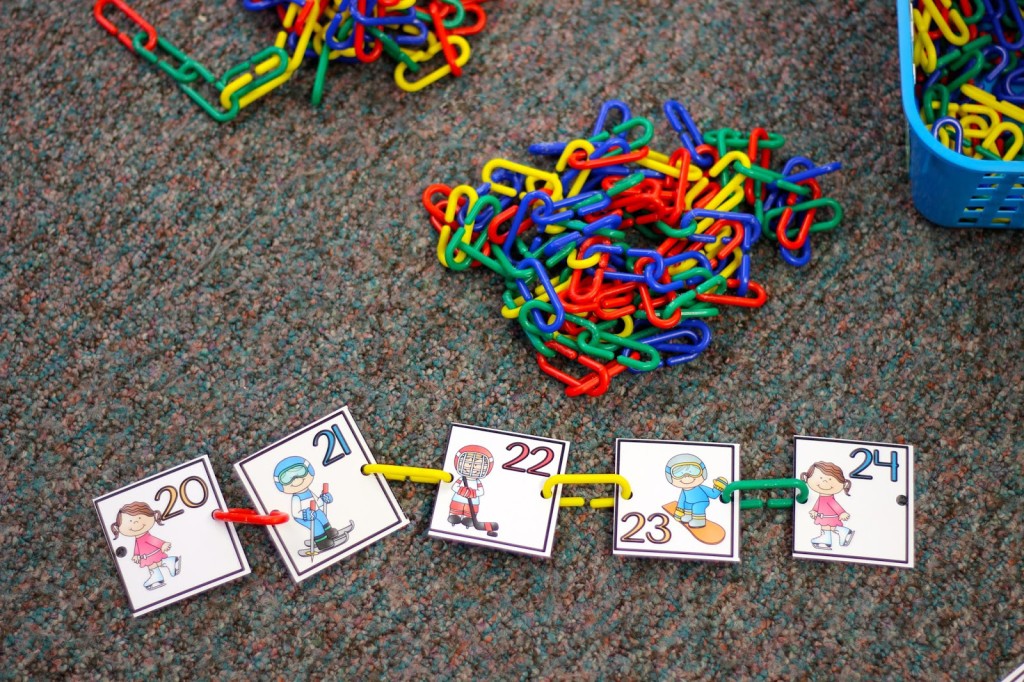 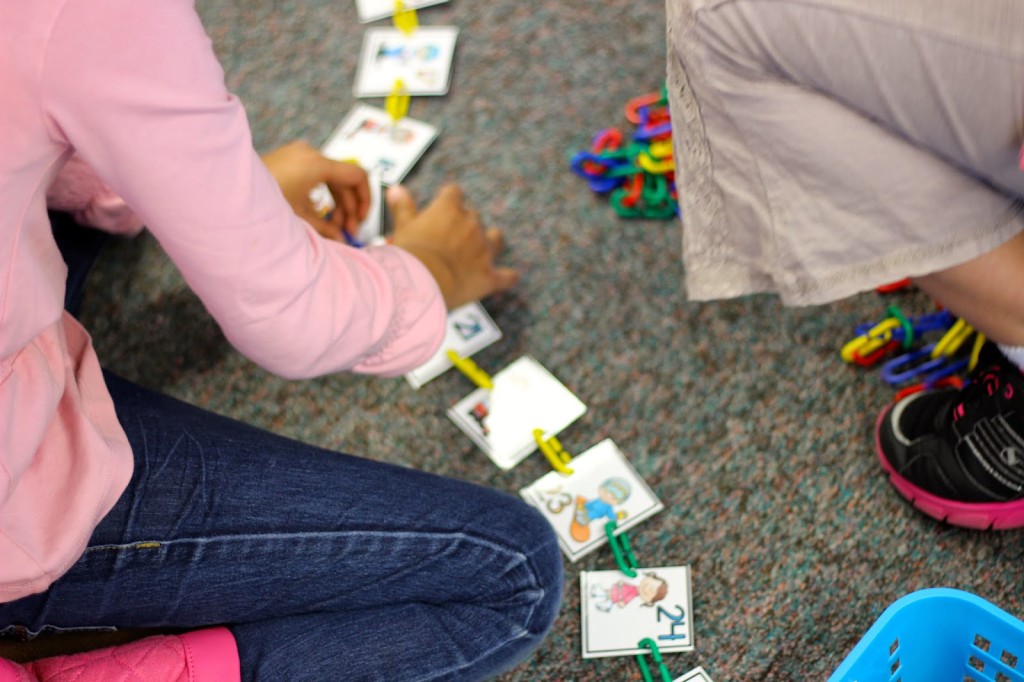 I love how it’s automatically a differentiated center — my kids that need to work on lower numbers can, and my kids that need more of a challenge can link the numbers together by 2s or go up to 120.
It is BRILLIANT.
Not to mention, this is time consuming.
And I am a fan of Things That Consume Time.
Seriously, so in love with this.  I can’t get over it.  I’m telling everyone!  One friend said she only used them for patterns and another friend said she only used them for measurement.
I nodded right along.  Of course, of course, me too . . . we certainly aren’t playing Doggie or King and Queen.
I mean, who does that?
Link-its serve a purpose.  Obviously.
« Five for Friday (on Friday again!)
Talk About It Tuesday »