It’s practically like winning the lottery, don’t you think? 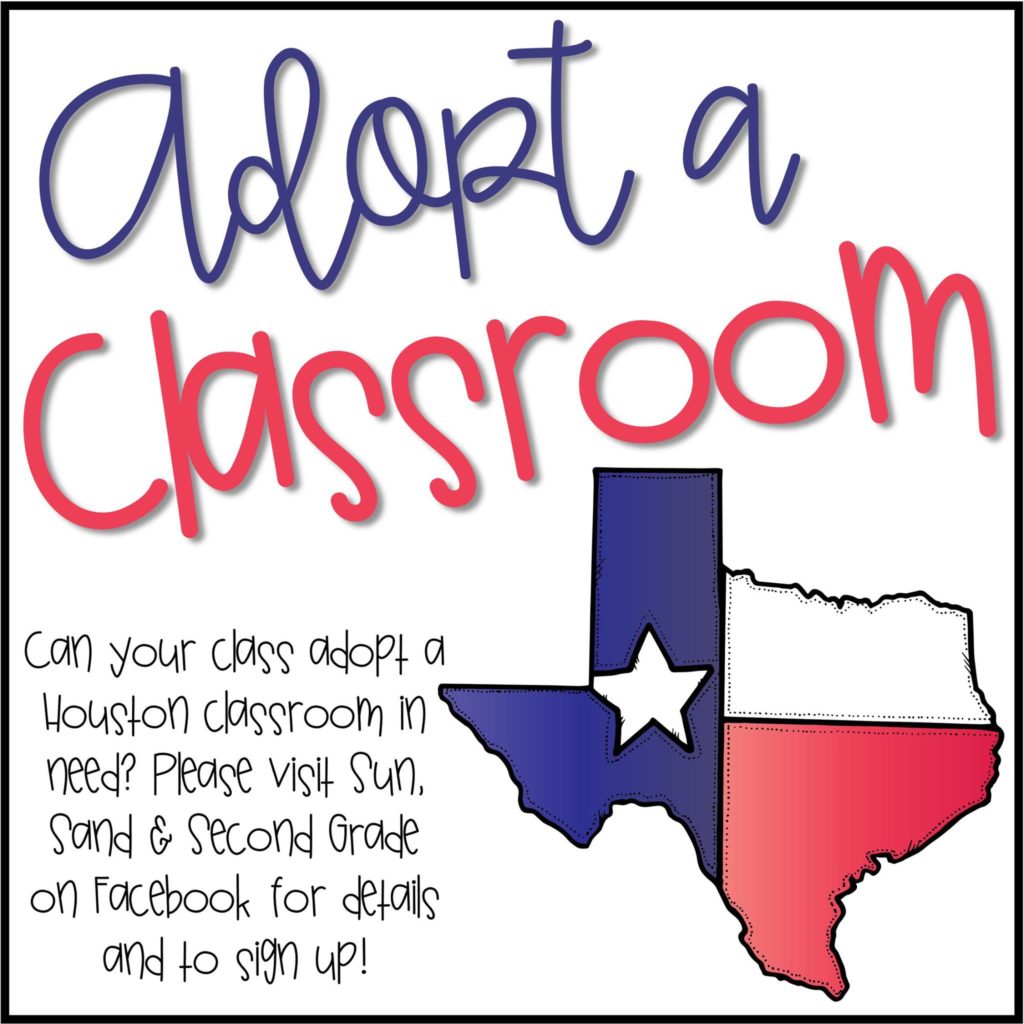 Poor Texas!!  Oh my word!  It’s awful.  I can barely watch the news or read about the stories – it is devastating!  I lived in Houston for four years during my elementary years and, as some of you know, my twin lives just outside of Dallas.

I totally want to help, and feel compelled to help, and I HAVE to help.  Steve and I were able to donate money, but when I saw this Adopt a Classroom campaign from Sun, Sand, and Second Grade, I knew it was exactly what I needed to do.

Right now, it is temporarily closed because TOO MANY PEOPLE SIGNED UP TO ADOPT CLASSROOMS.

Isn’t that the greatest thing ever?  TOO MANY PEOPLE SIGNED UP TO HELP.

I just love it.

I’m keeping my eye on the sign-ups, though, because it’s just temporary and once everything is figured out, Briana is going to have two (or even multiple) people adopt the same classroom so that they can really get all of their needs met. 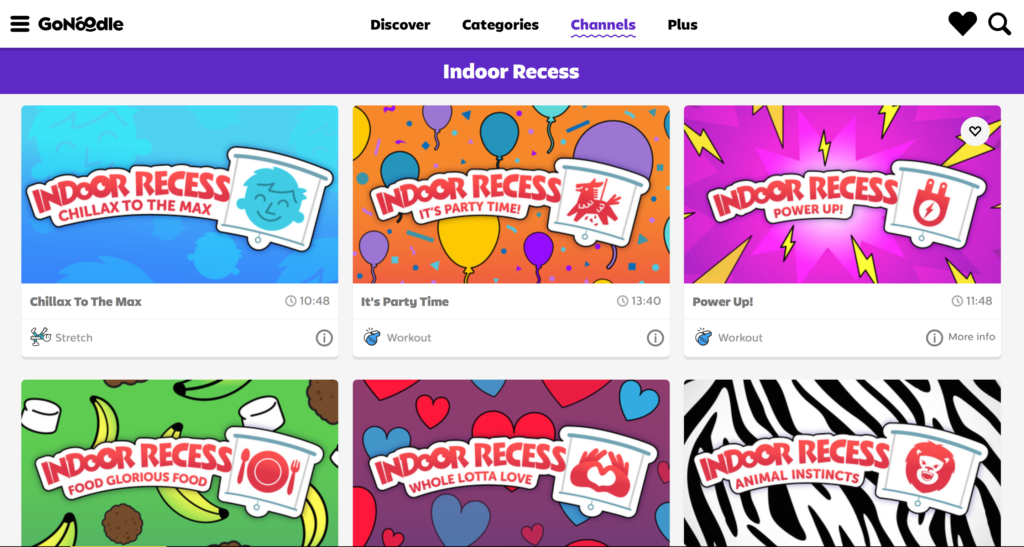 Here in my city, we have been experiencing a massive heat wave.  It has been BRUTAL.  One day the temperature reached 112 degrees.  I sweat going from my car into the school office.  And then from the office to my classroom.  I mean — I am disgusting before the day has even started!!  AND MY HAIR WILL NOT COOPERATE EITHER.

Obviously, we have been on inclement weather all week.

Three days in a row, we did not get any recesses whatsoever at all.

It was the third full week of school and we had just started getting into a groove and then BAM.

It was hard to complain or whine about it, though, because we have air conditioning in our classrooms, and then I’d think about Texas and then it was just like get over yourself, Kristin.

So I tried really hard to just go with the flow.

But you know it’s bad when your kids are getting sick and tired of GoNoodle.

It looks better next week so I’m really hoping we can all get back into the swing of things.

Wednesday was my first BEST day teaching.  I felt really good about it. 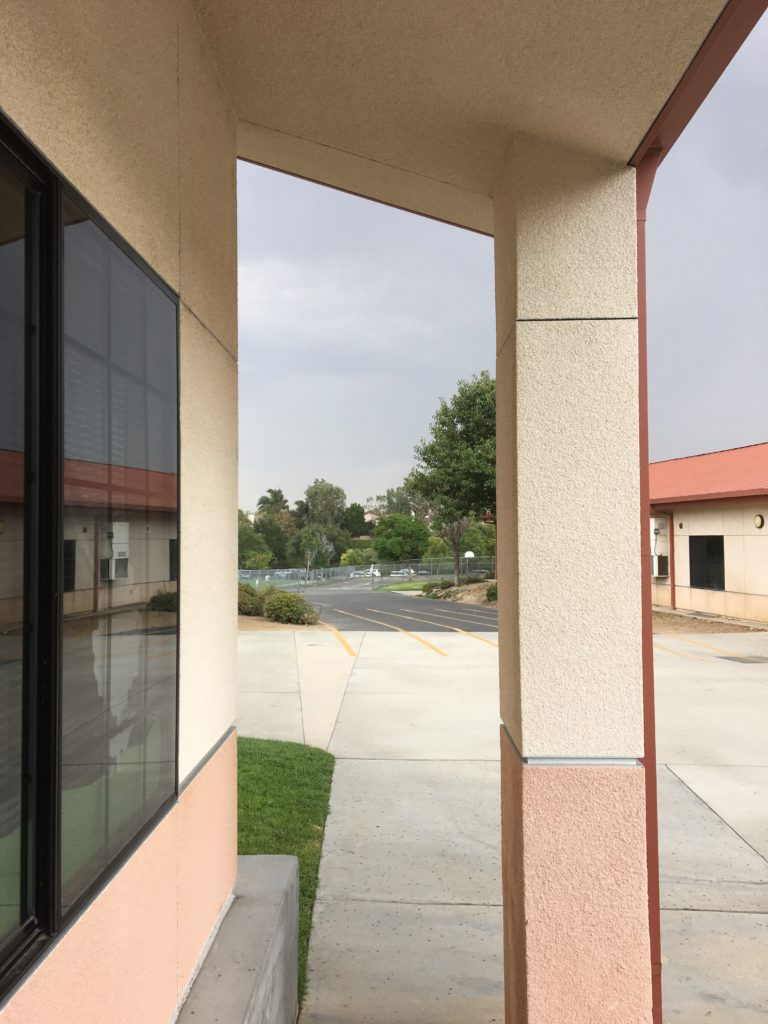 One day, right before dismissal, it got super windy and dark.

It came from out of nowhere.

But it was at dismissal so I didn’t care and I was just saying Bye, See You Tomorrow, Don’t Blow Away! while my kids were screaming there’s a storm, it’s a storm, look at the storm!

And there was NO RAIN AT ALL.

CALIFORNIA KIDS HAVE NOT A CLUE.

There was not one rain drop until about a half hour later.  But my kids walked to the bus lines and out to the front gate telling me it was storming and the fact of the matter is THERE WERE JUST SOME DARK CLOUDS AND IT WAS WINDY AND THAT WAS ALL.

When it did finally start to rain, the raindrops were GIGANTIC.

And kind of cold.

And it cooled everything off which was the BEST THING EVER.

We did get some thunder, too.

Two nights in a row this week, Steve and I lost power.  Well, our entire neighborhood did.  And it wasn’t too bad because it only lasted for about four or five hours and always came back on right before bed so thank God for the A/C, but I’ll tell you what WAS bad.

Steve went around the house and up and down the stairs with the ladder replacing all of the batteries in every one.

So then he googled how to reset each one if there is a power outage and went back around the house, and up and down the stairs with the ladder, and as he was on the last one, the power came back on.

The next night — same thing.

I thought he was going to lose his mind.

He went around the house THREE WHOLE TIMES.  Up and down the stairs with the ladder.

And they kept chirping.

Are you ready for this?

And it was never ever ever the smoke detectors at all.

After we replaced the batteries, of course. 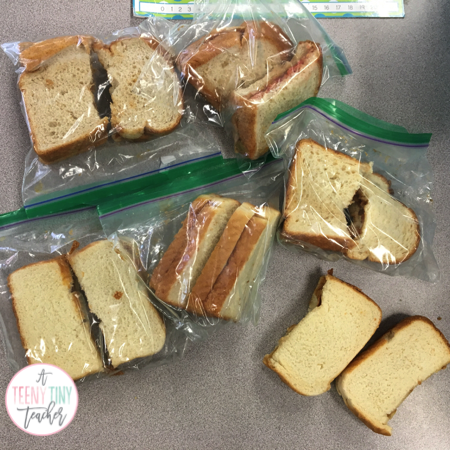 One of my girls left early one day and at dismissal, all of her stuff was still on top of her desk.  So I went to put her things away and I couldn’t.  Her bookS and whiteboard and pencil box wouldn’t slide all the way into the desk.  So I reached in and felt sandwich.

BECAUSE IT WASN’T EVEN IN A BAGGIE.

And this was AFTER I told her she could not keep fritos loose in her desk, either, which I’d caught her doing the week prior.  And we don’t eat lunch in our classrooms so . . .

Any who, I tried to put the stuff back in and nope.  Something was in the way.

So I reached in and pulled out a sandwich in a baggie.

I died laughing.  I laughed so hard.  My kids all gathered around me and they wanted to know what I was doing, and if I was doing magic because I just kept making sandwiches appear.

It was a Wednesday which means THREE of the sandwiches had been there OVER THE WEEKEND.

I don’t know how we didn’t get ants or mice because I’ve had both in my classroom.

The funniest thing of all, and I swear I am not making this up or exaggerating, this is absolutely 100% positively true, one of my boys came up to me earlier that day during our inside recess and said I smell sandwiches.

I AM NOT JOKING.

And I said well, we’re eating snacks in the classroom so maybe that’s why.  And he just repeated himself because we’ve talked over and over again about what constitutes a snack and what constitutes lunch (this is a first grade thing because our kinder classes are still half day programs which means the first day of first grade at morning recess, all of our kids want to eat their entire lunch) and so in his mind, he was probably thinking but it’s snack time and I smell lunch.

HE DOESN’T EVEN SIT AT HER TABLE.

But he smelled sandwiches!!!!

When I asked the little girl about it the next day, she said she only likes Skippy peanut butter and all of those sandwiches were not made with Skippy.

She was so afraid she was in trouble and begged me NOT to call her mom.  I told her she had to talk to her mom or I was going to and guess what?

The next day SHE BOUGHT LUNCH.

We had a nice chat AGAIN about how our desk is not a refrigerator, pantry, lunchbox, or cupboard.  And I think I scared her a little when I said she might have reached in and found ants or a mouse instead of her pencil box.

THOSE SANDWICHES WERE THE HIGHLIGHT OF MY WEEK. 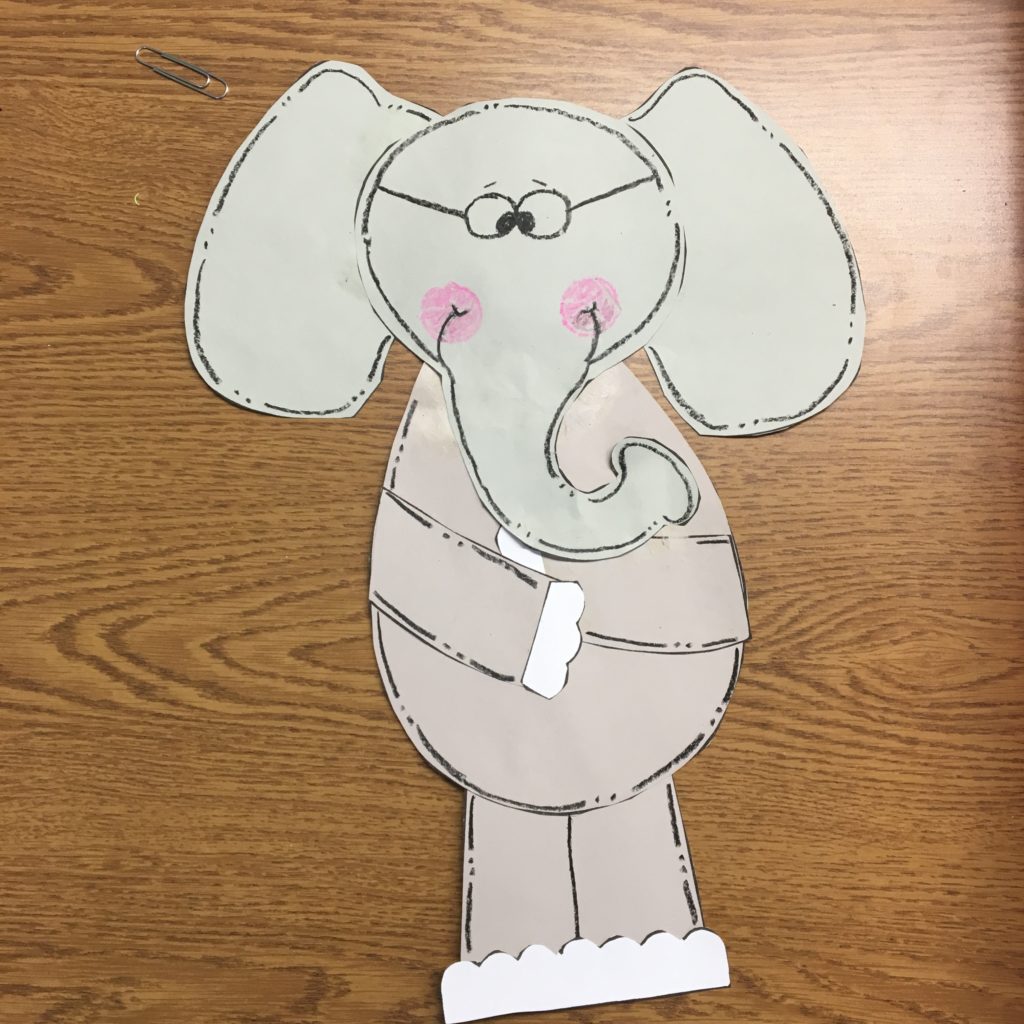 Little Kinder Bears is amazingly talented and I love all of her crafts.  I left her a Q/A in her store asking her (or politely begging, whichever) to make a Gerald and Piggie craft to go with all of the Mo Willems books that my kids and I are obsessed with.

If you do not follow her, I highly recommend it.  Just take a look around her store and you will fall in love with her crafts.  They are the SWEETEST!  I just really like her style.

We made Gerald on Friday and we’re going to make Piggie next week.

My kids were so excited.

Some of my girls made Gerald’s sister.  I didn’t know Gerald had a sister so I’m pretty sure they just made that up.

And that wraps up my week!

I hope you have a fabulous three day weekend!