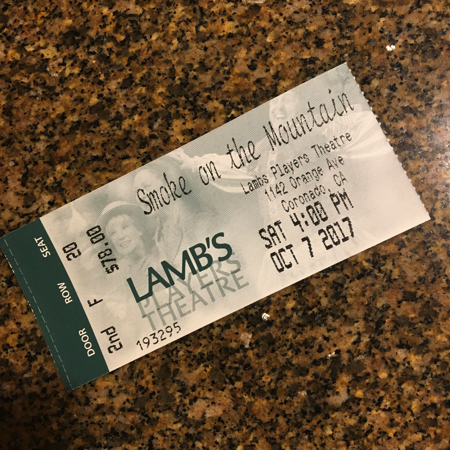 Last weekend, Steve and I went to San Diego with my parents to see a play.  The theater is located on Coronado Island and my parents go there often, and have had season tickets off and on, too.  Lamb’s Players Theatre is so so so cute!  Every seat is a really good seat and the set was just amazing.  My parents said their sets are always top notch.

They had seen this play before and thought we would really like it.

AND THEY WERE RIGHT.

You guys!  If you ever get the chance to see this play, in this cute theater, on this adorable little island, DO IT.

From their website:  “The Great Depression is finally coming to an end and the Sanders Family Singers are back on the road again. True, the bus has turned over, uncle Stanley is fresh out of prison, and sister June can’t really sing, but after this night, Mt Pleasant Baptist Church will never be the same!”

There were only six people in the cast and they were all so so so talented!  They could sing, play the banjo, harpsichord, guitar, piano, bass, harmonica, spoons, wooden blocks . . . it was FANTASTIC!  Sister June can’t sing but she translated everything into sign language and her facial expressions were hysterical!

It was a fantastic play and I highly recommend it.  Steve and I LOVED it.  We laughed so hard!

It was also very sweet and had a really good message.

Then we all went to dinner at Brigantine’s (a short walk which is a perk to being on an island) and the food was super yummy.  I had lobster tacos and truffle fries!!!  And my mom and I shared creme brûlée for dessert!  🙂

I love spending time with my parents and I am so thankful for them! 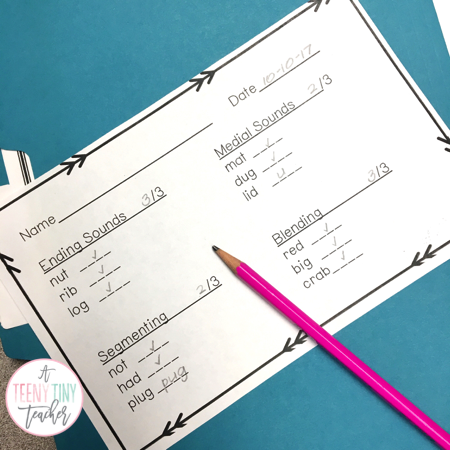 On Tuesday, I had an all day sub so that I could assess my kids ONE on ONE.  So far, every principal at my school (we’re on number four) has paid for us to have subs so that we can do this and believe me, I do not take it for granted.  I almost feel like I’m running a marathon on that day in order to meet with every student before the day is gone!

I set myself up in the little middle room of our building which is basically a closet filled with junk.  But I had a student desk, two chairs, and ABSOLUTE QUIET so I didn’t care at all that I had no windows, felt like I was suffocating, and as if I was in a dark, dirty dungeon.

Who cares, I said.

I HAVE AN ALL DAY SUB!

Meeting with my kids one at a time is so much fun!  They’re just adorable one-on-one.  That’s not to say they’re not when they’re in a group, but it’s just different.  And louder.  And just more.  And tiring.  And a lot.  And just — well, I wish I could meet with my kids one-on-one once a month.  It is so valuable.

The next day, several of my kids asked if we could do it again so I know they love the undivided attention, too.

I assessed phonemic awareness and then administered running records BECAUSE PARENT CONFERENCES ARE ON THE HORIZON.

And, according to the commercials and all of the stores, so is Christmas. 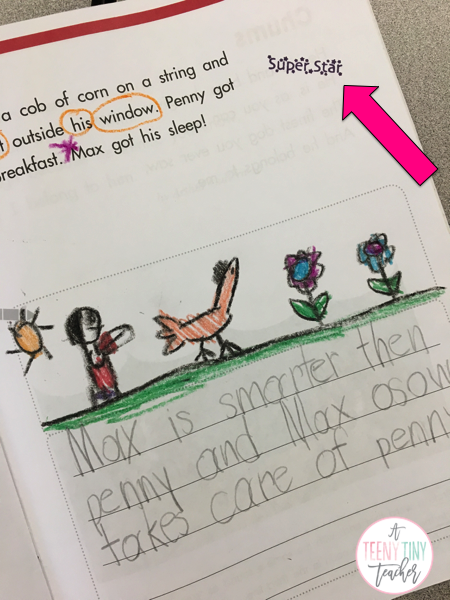 I do know a little.

I do know, for instance, that next year, I will skip the Henry Wadsworth Longfellow poem that went straight over my kids’ heads, out the window, down the hill, and into some high school kids’ brains since that’s where it found the appropriate place to be.  I do know that.

But I am starting to like our little consumable reading “textbook” because we get to write in it, no one has lost one yet (I know!), we can focus on close reading, and for someone who doesn’t know what she is doing yet with this curriculum (that would be me), the close reading tasks are at the bottom of the page so it’s kind of a no-brainer.

There is really no direction as far as the response on the right hand side of the book goes so I just kind of wing it, and let the kids and the discussion guide me . . . and hello?  I am a veteran teacher so I am also trying to just trust myself and my expertise and do what I think is best.

In the picture above, we were working on characters so I had them write about Max and an inside character trait.

Anywho!  When we first started using our books, I knew I didn’t want to collect them to “grade” them so I just spontaneously started walking around with a super old self-inking stamp to stamp their page and HOLY COW, can you say GAME CHANGER?

Our Benchmark Reading floppy consumable “textbook” (or whatever you call it) has become one of the QUIETEST times of our week.  They LOVE working in them.

I’m just walking around, stamping, and scratching my head.

Not me of the Houghton Mifflin Hardbound Textbook Obsessed. 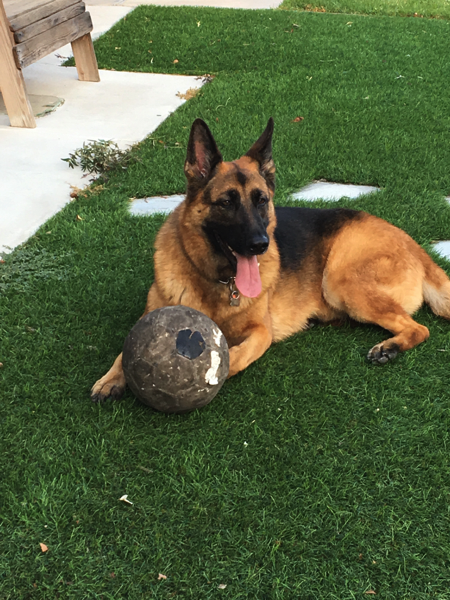 I thought I lost Murphie this week.

Full on panic attack, I’ve lost Murphie, she’s a big dog, I should be able to see her, how is this happening, I can’t breathe, where did she go, where could she be, my house isn’t big by any standard, this is not happening, WHERE IS MURPHIE?

And once I told everyone about it at school, they all just told me that my brain is full and that it is a CLEAR EXAMPLE of how tired teachers are right now.  We are in the midst of report cards, assessments, parent conference prep, fundraiser stuff, awards, and a host of other things that I know I am forgetting to do.

And how I am supposed to remember anyhow?

First of all, let me tell you that I was already running late because I actually washed and dried my hair.  I have no clue what made me think I had time for clean hair because I DID NOT.

I headed downstairs to leave and Murphie wasn’t in the family room.  And I thought to myself I don’t remember seeing her in our room.  That’s weird.

But I ran back upstairs anyway.

And she was NOT in our room.  Or my office.  Or Steve’s office.  And there’s nowhere else to look except for the bathrooms and she wasn’t in either of those.

So I went back downstairs AND SHE STILL WAS NOT THERE.

Nor was she in the backyard (we have doggie doors, as you may remember).

I started to panic.  Told myself to calm down.  I yelled her name.

I went back through the house.

Opened the front door, yelled her name, NOTHING.

Then I started to cry.  And then I looked in the kitchen pantry as a just in case.

Did the whole route again, for a third time.

I picked up the phone to call Steve and while I was hyperventilating, it hit me.

I hung up before it rang.

Because I *FINALLY* got part of my brain back and remembered where Murphie was.

Not at day care.

Steve took her to the park LIKE HE DOES EVERY SINGLE MORNING REGARDLESS OF THE WEATHER, THE TIME, THE DAY, NO MATTER WHAT (unless we are on vacation) AND LIKE HE HAS DONE EVERY SINGLE DAY SINCE WE GOT HER AND SHE HAD ALL OF HER SHOTS.

He goes to Starbucks, gets a coffee, and then takes her to the park.

IT IS ROUTINE.  IT ALWAYS HAPPENS.  ASK ANYONE.

I’m pretty sure when he kissed me goodbye, he said to me Have a good day, we’re going now”.

As in Steve AND MURPHIE.

As in it’s almost like Groundhog’s Day, this happens every single morning.

And I don’t know why.

I DO NOT KNOW WHY.

My teammie, Laurie, thought it was hilarious that I wasn’t worried or concerned with where Steve was . . . 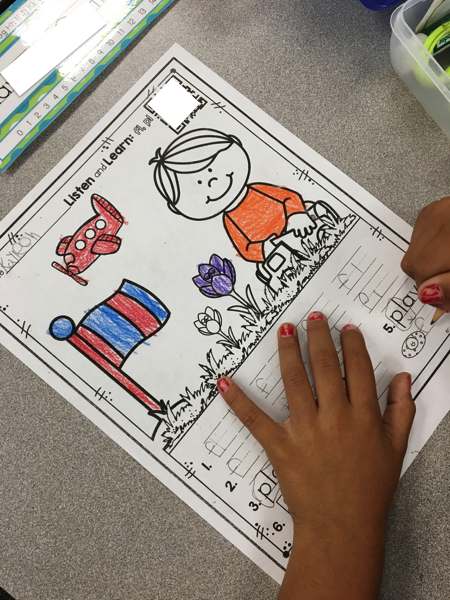 The last couple of days at school were a bit rough.  I’m not saying any names whatsoever at all, but I think it was because of my students.

It was probably me.

It was like I had not even spoken a word.

It was driving me BONKERS.

On Friday, after a few times like this, I decided I needed a moment.

Don’t we all deserve just a moment?

A moment in time where no one is talking or moving or getting up or saying your name or telling you that it’s their dad’s cousin’s father’s son’s birthday next month?

So I pulled out a Listen and Learn Blends activity (we are working on blends) and plugged my iPod (I have all of the MP3s for my Listen and Learn packs on my iPod so that I don’t have to fool with Wi/Fi and whether or not it’s working and blah blah blah) into our fancy dancy eyesore thingamajig so that the recording would come out of the classroom speakers in the ceiling and . . .

I got a moment.

I got more than a moment.  I GOT FIFTEEN MINUTES.

I have done one Listen and Learn activity all year.  Way way way back in the beginning of the year to prepare them for centers and so my kids would know what to expect, but then I had a headphone situation going on and let me tell you, I did not want to hear my voice coming out of four different iPods at different times, so I gave up.  My headphone situation has now been resolved and my kids do these every once in awhile during centers, but not all the time because now I have my cassette tapes transferred to my iPods so we use it as a listen to reading center, as well.

All of that is to say that using a Listen and Learn WHOLE CLASS is MAGIC.

I honestly do not understand how my kids will listen to a RECORDING of my voice teaching a lesson better than they listen to me LIVE and IN PERSON, but holy cow.

I told them I would not be pressing pause for any reason.  That if they couldn’t find the color that I asked them to use, TO BE A PROBLEM SOLVER.  To figure it out!  TO MAKE IT HAPPEN ANYWAY.

Not one person got up and came over to me.

Not one person yelled out that I was going too fast.

They all responded when my recorded voice segmented the sounds of a word (f-l-a-t) and asked them to tell me the word.  And the opposite.  And on and on.

They laughed when my recorded voice said funny things.

They FOLLOWED THE DIRECTIONS TO A “T”.  Even my struggling learners were able to follow along and they were successful!!!

And I’m not ashamed or afraid to admit that I sat at my teacher table  taking care of some much needed paperwork/homework/parent conference schedule reminders/etc etc etc.

When the recording ended, my kids cheered (not joking!!) and then asked if they could color the rest of the page (we only color certain parts based on the skill).

It was MAGIC.  Did I already say that?

I hip hip hoorayed and told them how proud I was of them for being such great listeners, and follower of directions, and they beamed and patted themselves on the back, and the rainbows came out, and unicorns danced around our room, and some puppy dogs licked us, and there was confetti all around and then . . .

I asked them to line up for lunch and NOTHING HAPPENED.

I look upon those minutes very fondly now.