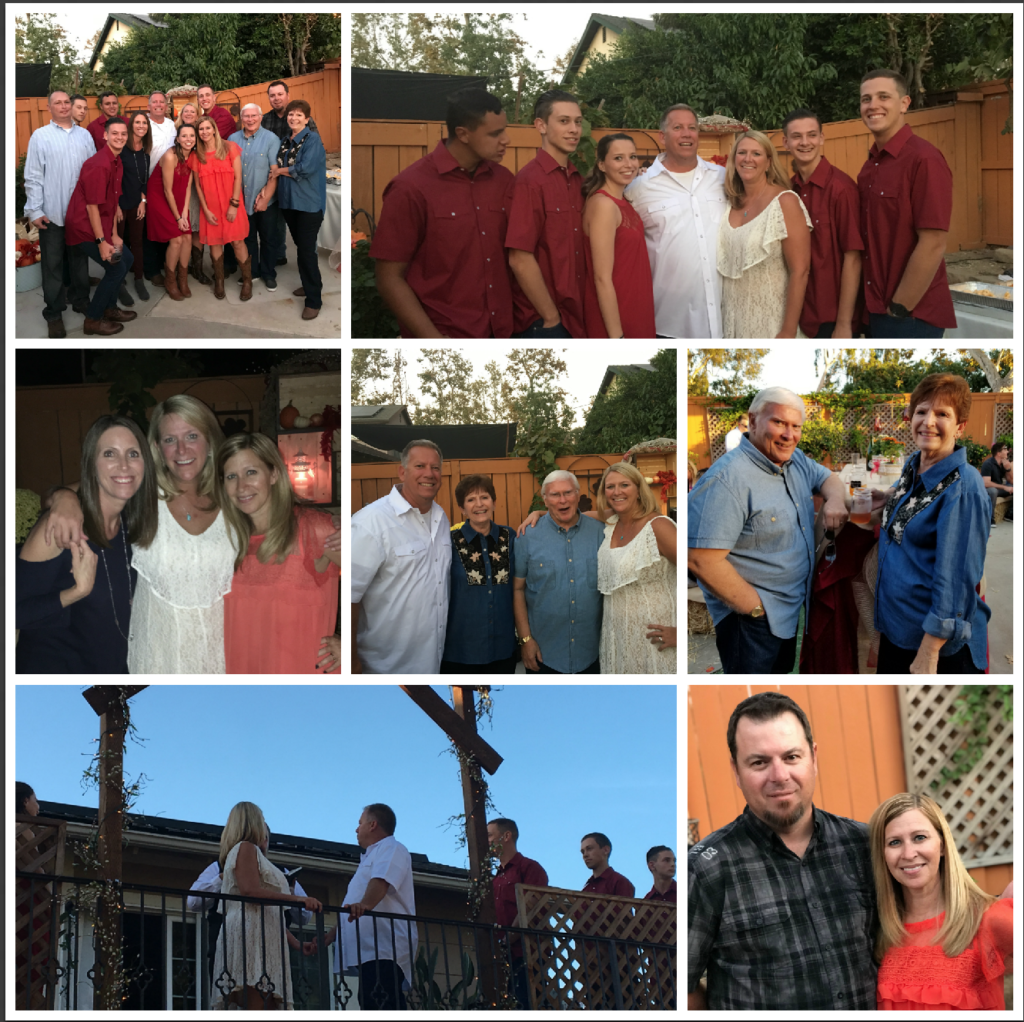 It was a small wedding in their friend’s backyard (who happen to live in the same neighborhood as my parents, which means we just walked across the street) and the decor was SO SO SO cute!  Everything was “country” with wine barrels and chalkboards and twinkle lights and mason jars . . . it was super sweet and cozy.  The weather was perfect — not hot or cold, just right!  I got to “hand letter” some of the signs with my “Teeny Tiny font”!  Ha!

The ceremony was held on the balcony and the rest of us were below watching.  My dad opened in prayer, Eric’s dad read 1 Corinthians 13, their friend officiated, and their kids stood up with them.  They are now a blended family which means I just officially gained three nephews and I absolutely love them.  They are amazing boys – so sweet and respectful!  Eric and Lisa have been together for five years and we have gotten to know Eric and his boys over the course of that time, and we are all really really really happy for them.  🙂

Kerry flew out for it, and Ashley came home for it so I was on Cloud 9.

They hosted a brunch at their house the next day (a chef from a restaurant in Laguna Beach made omelettes and waffles in their kitchen!!!  It was like a Real Housewives episode) and it was delicious!  🙂

It was a wonderful weekend! 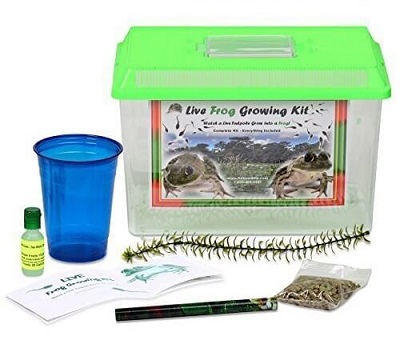 I asked you all last weekend whether or not I should grow frogs and . . .

Almost all of you scared me to death!

There were only a couple of people who said to go for it.

Apparently, they live FOREVER, you can’t just release them back into the “wild”, they stink, you need special water, some of the tadpoles take FOREVER to do anything, it’s AGAINST THE LAW in some places, and a whole host of other things that I am forgetting to tell you because JAIL, obviously.

You don’t have to threaten me with PRISON because I had a thought of growing a frog.  It was JUST an inkling!  I don’t need to research where I live, and which species I can grow, and whether or not it is even allowed because my research was asking all of you and believe me, I heard you loud and clear.

I won’t be growing any frogs any time soon so my poor first graders are just going to have to read about it and maybe watch a video.

It can’t be helped.

It was a big fat no as soon as someone said they stink.

I’m thinking we will plant.

I know how to do that REALLY WELL and even blogged about what an expert I am {HERE}.

Stick with what you know is what I always say. 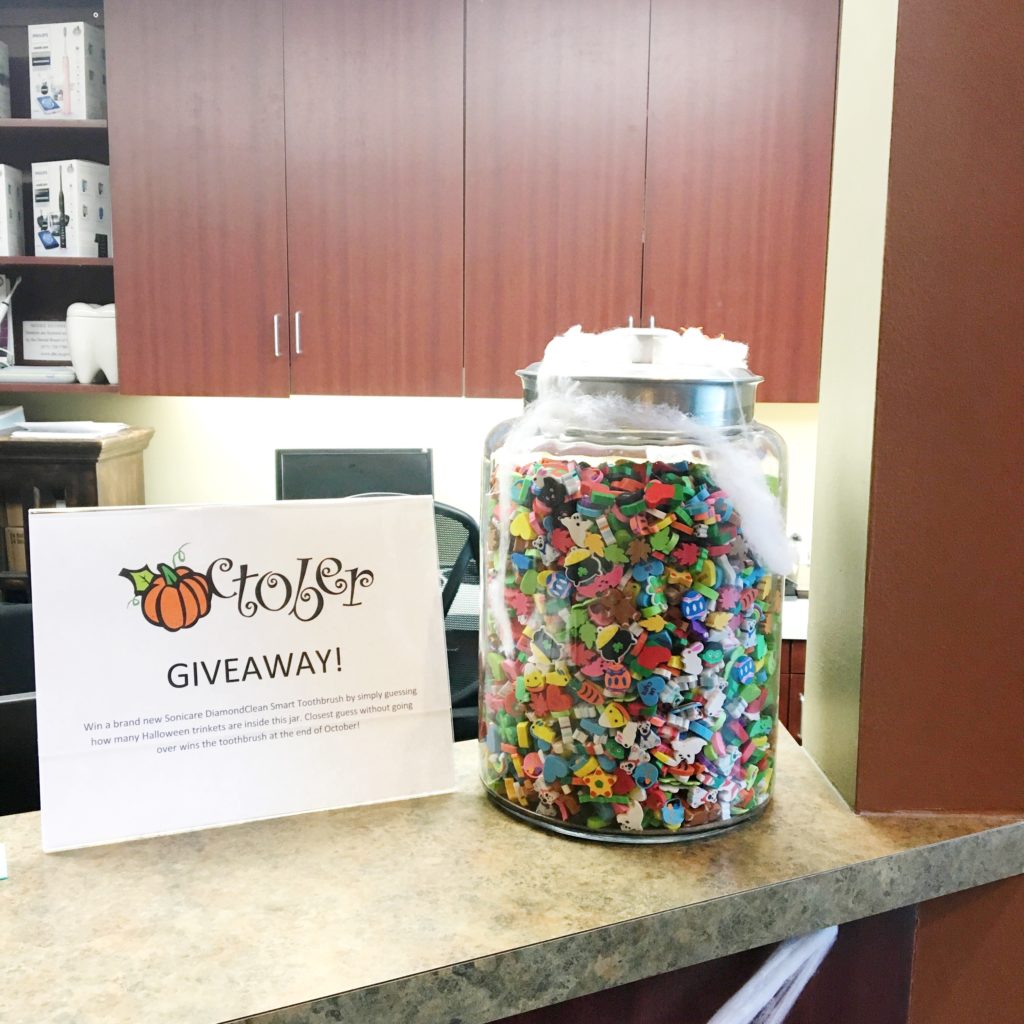 I went to the dentist this week and look what was on the counter!

That is a GIGANTIC jar of mini erasers and they represent ALL THE SEASONS.

I’m really close with my dentist because I have a gazillion issues and I see them every three months (sometimes more) and Steve’s aunt (who is really like his mom) is an assistant there, so when I go, I’m pretty darn comfortable.  They’re like family.  I walk in and everyone knows my name.  Sometimes, I imagine that the other patients in the waiting room are jealous.

I wish Steve’s family worked at a winery and I was going there every two or three months . . .

All of that is to say that when they told me to guess, I said sure, not a problem, I’ll do that.  They wanted me to like their Facebook page and Instagram and blah blah in order to guess.

So while I was doing all of that, Steve’s aunt said to me you can win a really nice Sonicare toothbrush.

So she started to repeat herself, but I said hold up, hold up!  I don’t want to win a FREAKING TOOTHBRUSH!  I thought I would win these erasers!

And yes, I can read THE SIGN that says what you win, but I did NOT read the signs because the mini erasers were DISTRACTING ME.  DUH.

Where I’m from (which is California, but I grew up in Texas and Oklahoma so I’m from a lot of places, which is MY POINT), you guess how many are in the jar AND THEN YOU WIN THE JAR OF STUFF.

Well, I had my cleaning and some X-rays, and then I was making my next appointment when I had to bring it up again.

I said Look.  Listen.  I already have a Sonicare.  You know this because you MADE me get one.

So I tried another tactic.

Hand over the erasers and nobody gets hurt.

I’m telling you — coming soon to a theater near you.

Then I tried to pretend to run off with them, but that gigantic jar was made out of GLASS, genuine GLASS, and I couldn’t really lift it without fear of dropping it so that didn’t work.

Finally, the dentist came out and said that he couldn’t just give me the erasers, he needed the erasers.

And I was all Um, excuse me, but WHY IN THE WORLD DO YOU NEED THESE ERASERS, JUST EXACTLY HOW MANY MISTAKES ARE YOU MAKING IN A DAY?

AND THEN I SAID:

This doesn’t even make sense!  You have a gigantic jar of MINI ERASERS and you are a dentist!  Why isn’t this filled with floss or toothpaste or fake teeth or something?!  I just don’t understand why you’re doing this to me!?!

He said he got all of the erasers from Oriental Trading Company and that I could just buy them.

Why?  WHY? I ask you!  You have a GIGANTIC JAR right here, you are not going to use them, I will DEFINITELY use them, GIVE THEM TO ME NOW PLEASE.

Then I listed all of the possibilities from sorting to patterns to adding to subtracting to Bingo to spinners to graphing . . . I mean, I was downright annoying.

In the end, because I can be persuasive and sweet and funny when I really want something, he agreed to give them to me IN MAY.

Because, you see, it’s a MONTHLY DRAWING.  And for this month, you’re supposed to guess how many HALLOWEEN erasers are in the jar, and then in November, you guess the ones for that month, and so on.

I think I’ll have a ton of new mini erasers for next school year. 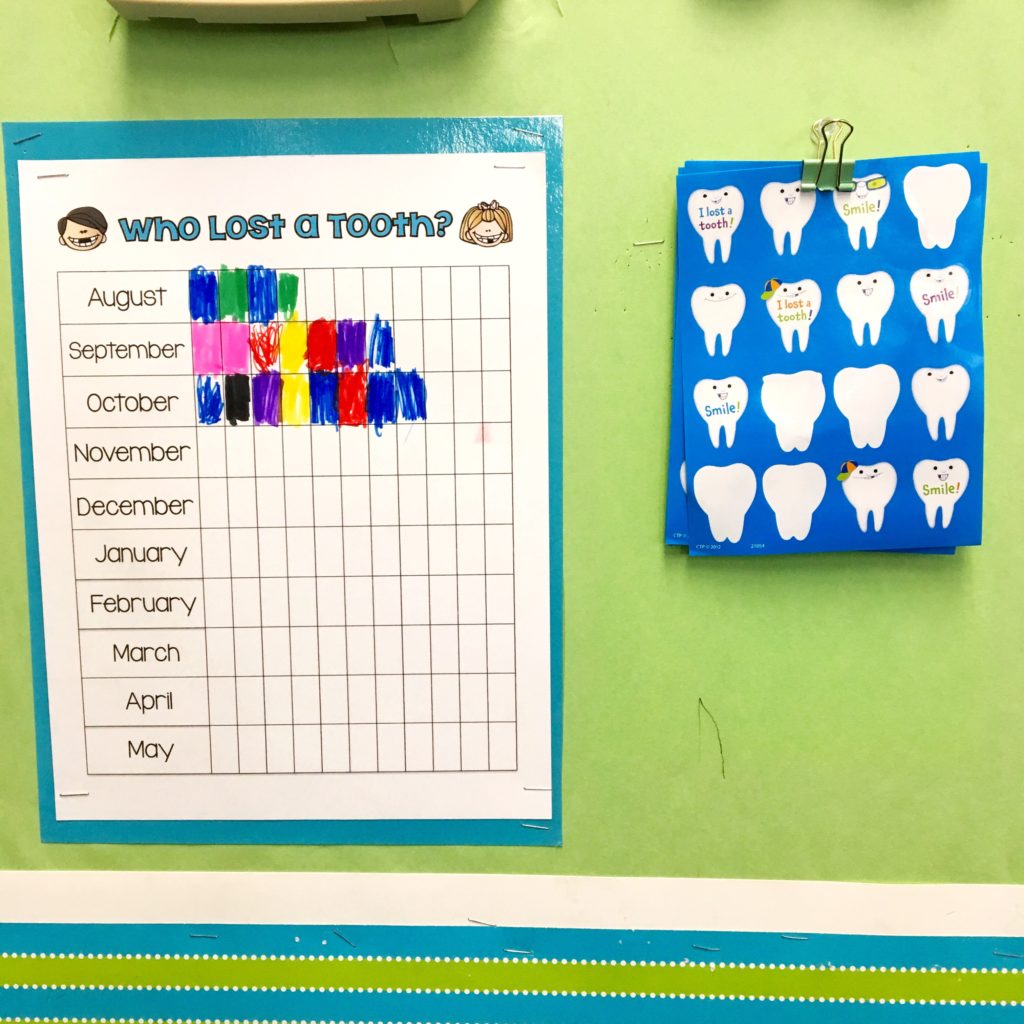 I blogged about what I do for kids who lose a tooth many years ago.

It’s changed since then.

And I have more kids.

I’ve made it super easy for myself, as you can see.

The kid colors a box on the graph, grabs a sticker, and walks away.

Sure, they TELL me they lost their tooth, they want to show me their “window”, they want to tell me about the tooth fairy, and they go on and on, and ON AND ON, but in the end, I don’t do anything.

But then I say go color the graph and grab a sticker, and I move on.

I used to have a big, oversized library pocket next to the graph.  The stickers were in the pocket.  It was a really cute pocket and I had a cute label on it and it was just OH SO CUTE.

But it wasn’t practical.  It fell off the wall a lot.  And it ripped.

BECAUSE FIRST GRADERS ARE NOT GENTLE WHEN THEY’RE DIGGING AROUND FOR A STICKER.

Now I just have the sticker sheets on a binder clip and it is working out LIKE A CHARM.

I have never felt so care-free.

If you need the graph, click {HERE}!  It’s in the blog post where I was younger and had less kids and took the time to be OH SO CUTE. 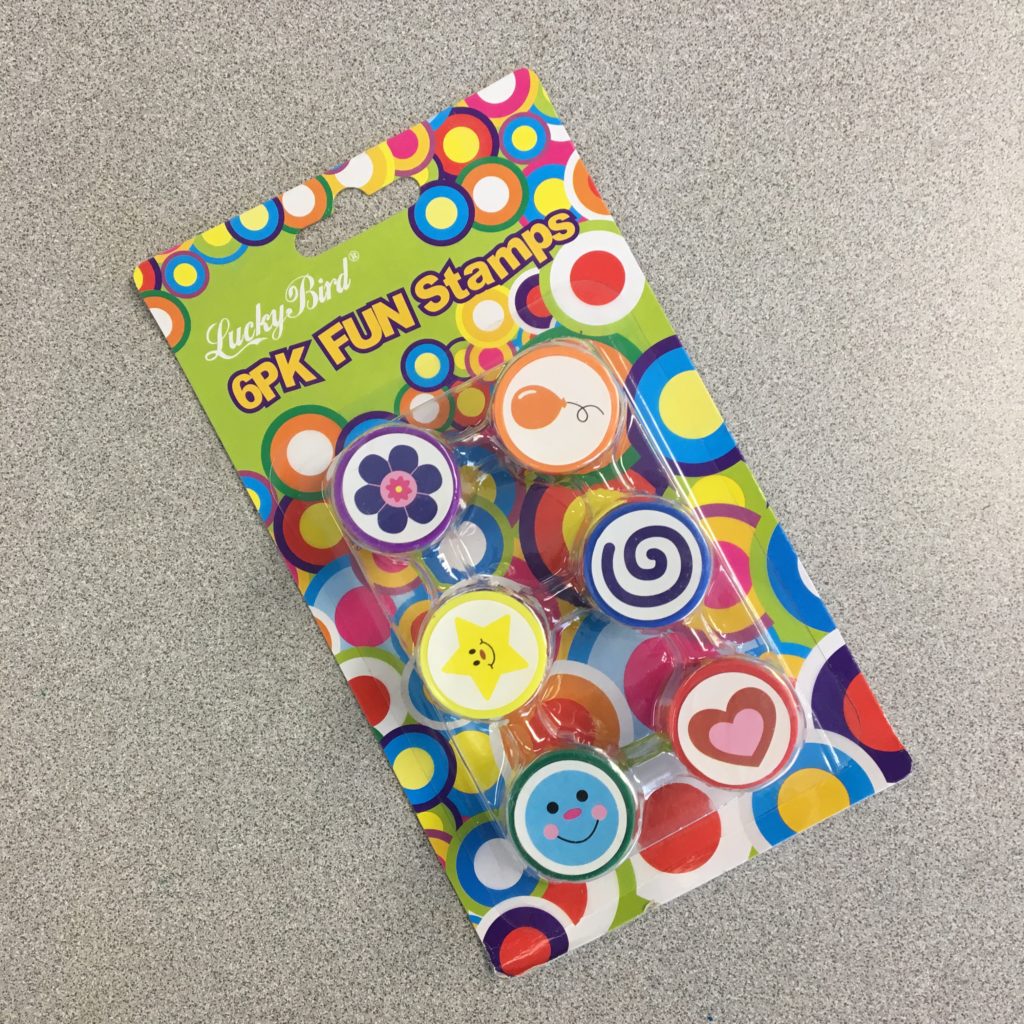 New self inking 2017 stamps!!!  I needed to “up” my game!  I mentioned a couple of weeks ago that my kids will work SO HARD for a stamp.

In fact, they will work hard for pretty much the ugliest stamps in all the land.

I have been using these old self-inking stamps that I bought at our local teaching supply store YEARS AGO, and they’re ugly.  I’m just being honest.  They are not cute in any way, shape, or form.

And here’s how I know that they’re ugly.

One of my girls brought in a self inking stamp (similar to the ones pictured above) and GAVE IT TO ME.  She said you can use it instead of those other stamps.

THIS IS FOR REAL.

And then ANOTHER student brought in ANOTHER one.

I started feeling a bit insecure about my ugly ole stamps.

I decided I needed to check good ole Amazon to see if they had any that are more 2017ish and I found TONS!  I ordered way too many but this was the first set that arrived.  I also ordered THESE and THESE.

Because I am over-compensating for my ugly ole stamps, obviously.

I have a weekend of pretty much ZERO plans and I am so so so excited about it.