Hello, Happy Saturday, Happy Who Cares What Day It Is, I’m On Summer Vacation, And Every Day is Saturday!  I hope you’re on summer vacation, too! 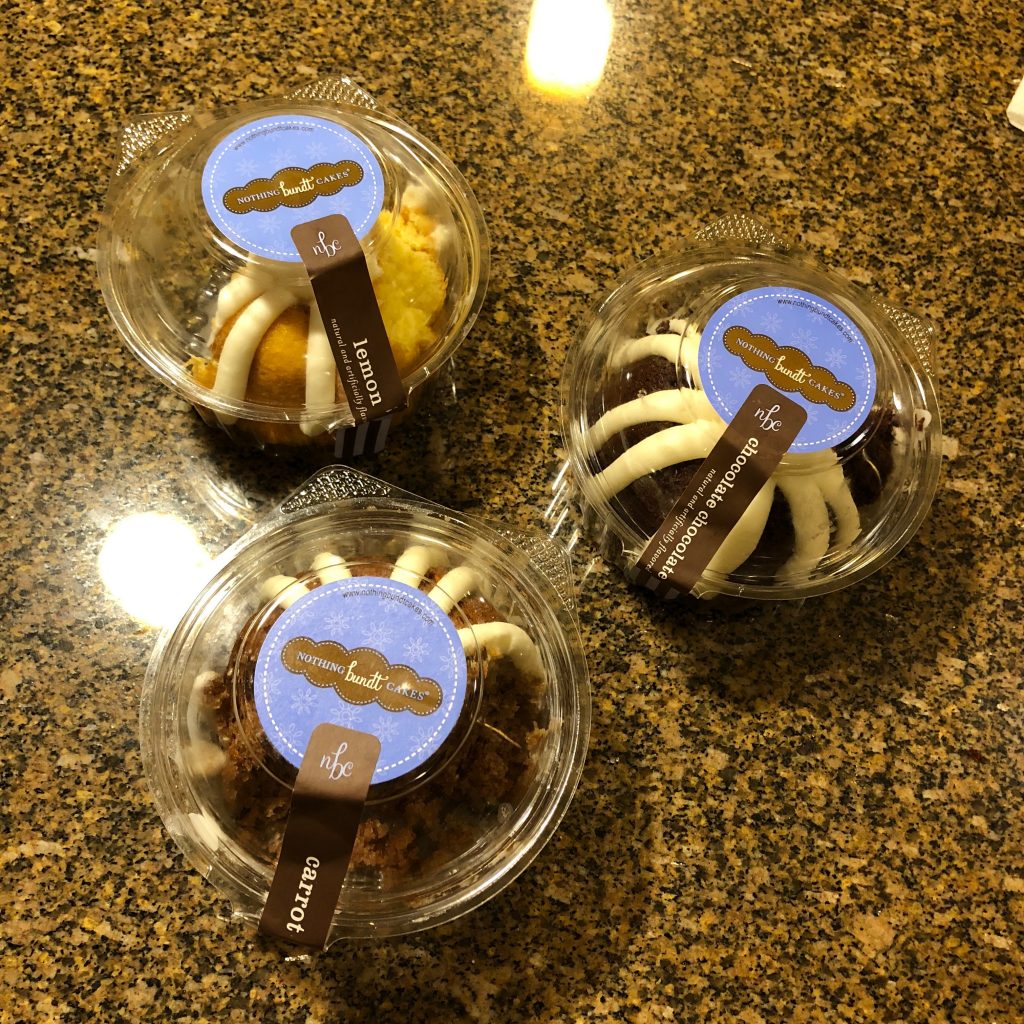 Steve and I have birthdays two days apart.  I know, I know, so cute, right?  In the grand scheme of things, it doesn’t really matter because I share my birthday with my twin, Kerry, and since we were womb-mates and all, having a birthday close to your husband’s doesn’t really count.  In fact, this year, Kerry and I got each other the EXACT SAME CARD, wrote in them, addressed the envelopes, stamped them, and put them in the mail where they crossed by each other probably somewhere over Arizona or New Mexico.  When I slid the card from her out of the envelope, I thought my card to her had been returned!  HA!  I promptly turned the envelope over to check, but nope, we just happened to get each other the exact same card which cost over $5, as most cards do these days.

But anyway, I digress, per usual.

Then Steve decided he hadn’t had enough carbs, and not nearly enough sugar throughout the day, and he stopped by Nothing Bundt Cake on our way home.  I was just the passenger.  There was nothing I could do about it.  Just along for the ride, was I.

We had to get chocolate chocolate chip because that’s all I know and I tend to like the same things over and over, but then we decided we would each pick one more flavor and have a taste test of sorts.  Steve picked lemon because he loves anything lemon.  ANYTHING.  Give him all the lemons.  And I picked carrot cake because carrots are healthy.

Of course, I forgot to take a picture of the cakes until we’d already eaten half of them because HELLO?  I couldn’t wait.

The carrot cake was also delicious, but not my favorite.  But still, SO SO SO GOOD.  I don’t want it to get a bad rap.

It sounds like I’m around lemon a lot, but I’m not.  Just trying to make a point of how I don’t like lemon.

Well, Steve wouldn’t stop talking about how delicious the lemon cake was so I finally decided to try a bite . . . and . . . you guys . . . I can’t even explain how I went from no thanks, I don’t like lemon to fighting Steve to the death for the rest of that lemon cake.  I mean.  GIVE IT TO ME!

Next time, I am trying the Marble and Funfetti. 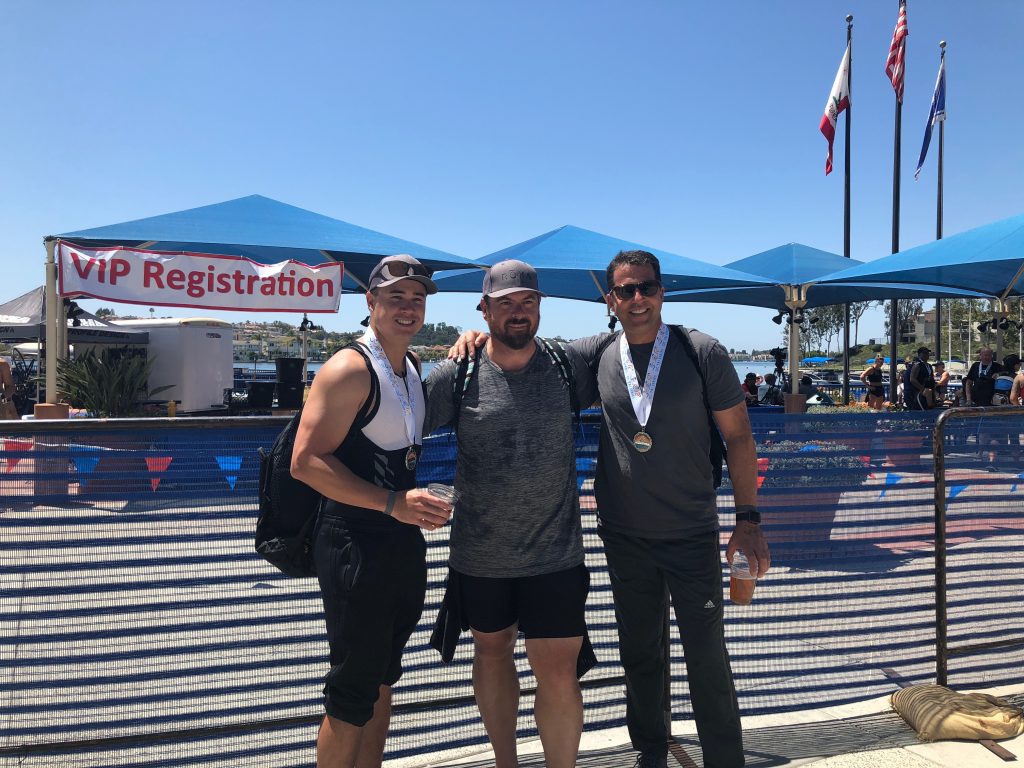 Yep!  Steve completed his second triathlon on Sunday!  He’s not wearing his medal in this picture (for whatever reason) but he did finish it, he did complete it, and he is my hero!  It was a really really really tough course with a LOT of hills, and it took him a lot longer than it did the first time.  He is super hard on himself and the first thing he said to me when I saw him afterwards was I’m sorry.  I said what? why?  And he said because it took so long.

We got up at 4am to head down to Orange County and then met up with my sister, Lisa, and my brother in law because they were also there to cheer on a friend of theirs.  His wife was with us, too, and we had a grand ole time sitting at a picnic bench, eating snacks, and chatting.  Steve might have felt like it took a long time, but it flew right by for me!  🙂

I am so proud of him and all his hard work!  There is just NO WAY I could even think of doing what he keeps doing.  There is already talk of another triathlon in September.  THESE BOYS!  What in the world is wrong with them?  That’s what I would like to know.

It was a fun day!  We followed it up with doing absolutely nothing except for lounging on the couch, eating yummy food, and napping.  It was the perfect way to spend my birthday. 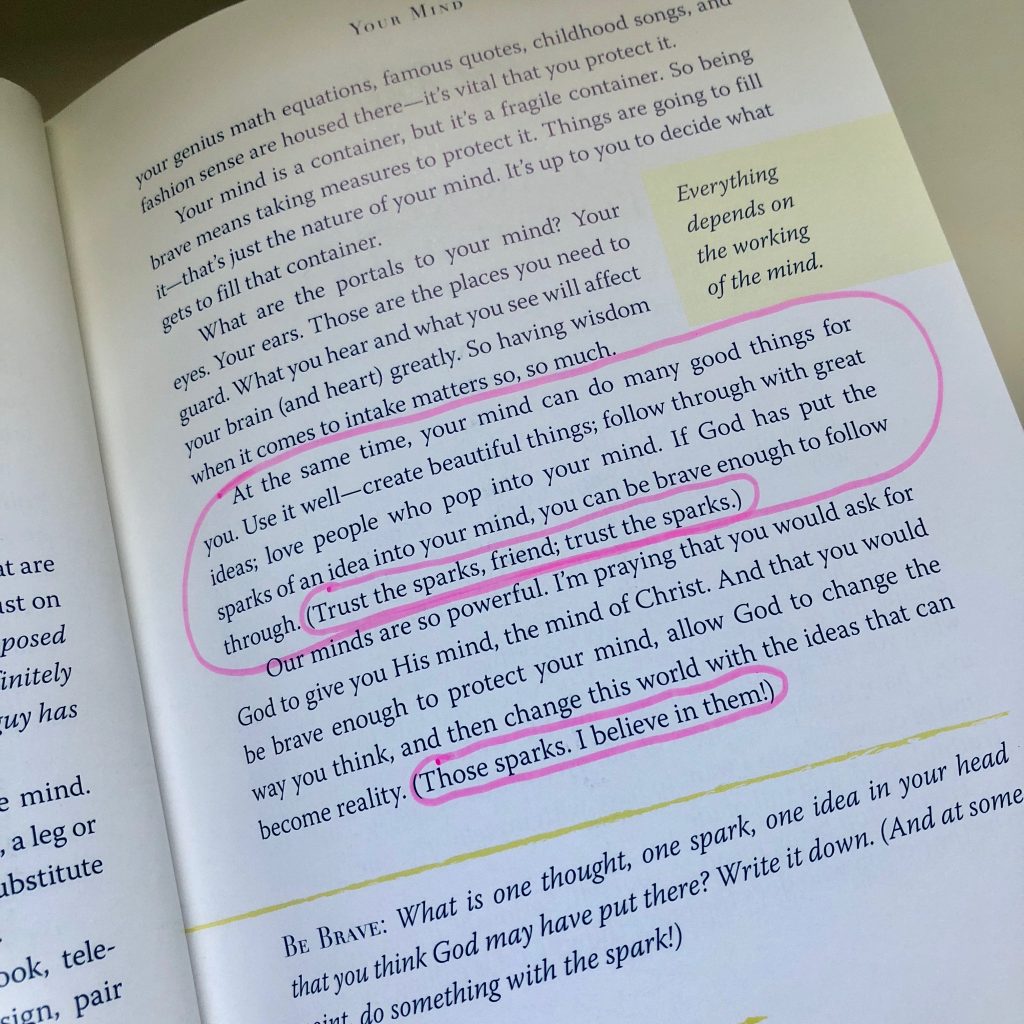 So . . . I started reading this book called 100 Days to Brave by Annie F. Downs.  I’m going to go out on a limb here and say you’re supposed to read one section each day for 100 days straight.  Yeah, um, no.  I haven’t done that.  I believe I started reading this devotional book in March and I just read Day 12 today.  Keeping it real, folks.

Well.  It’s a good book.  Especially if you don’t consider yourself a very brave person and I do not.  I need to be more brave in a lot of aspects of my life.  I’m not talking about bungee jumping or cliff diving or whatever else sounds scary and stupid, and doesn’t actually require bravery so much as throwing caution to the wind.  I’m talking about speaking up when things are wrong, fighting for what’s right, being quiet when you want to yell, etc.

Recently, I have done a lot of soul searching with this one situation at my school, and I’ve prayed about it, and I’ve sought my parents’ spiritual guidance, and I’ve talked about it practically nonstop to anyone who will listen.  Now, I really really really wish I could go into it on here and tell you EVERYTHING because I don’t want to sound like one of those people on Facebook or Instagram or a Blog who say cryptic things like I can’t go into it, but I’m asking for prayer or I’ve got a big announcement that I can’t tell you yet or we don’t want to tell you the name of our baby until the baby is here because maybe you’ll steal the name for your next dog.

That stuff drives me crazy.  Just in case you wanted to know.  CRAZY.  WHACKADOODLE CRAZY.  Don’t write anything if you can’t tell me what you’re talking about, thank you very much!

But I can’t tell you about this because I could technically, maybe, I don’t know . . . get in trouble??

But I also want you to know that I’m staying at the same school, still teaching first grade, nothing is changing for ME personally at all.

However.  I am trying to wear some big girl undies (which are NOT comfortable) and change something that should be changed because it is what is best for the students.  And the day after I took my first action step (in which I was sweating profusely), I read that passage in my devotional.

I will keep you posted if I’m able to create some change!  Just know that I am being brave!  🙂 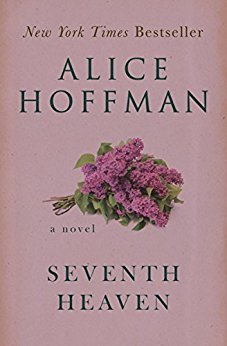 I was asked to recommend more books for you.  Especially since it’s summer.  I read A LOT.  I read a lot of fiction as opposed to Daily Devotional books that would be more valuable, obviously.  I think I need to change my priorities a bit . . . er . . . ahem.

Alternate Side by Anna Quindlen

The Mother’s Promise by Sally Hepworth

Sometimes I Lie by Alice Feeney

The Family Next Door by Sally Hepworth

The Perfect Mother by Aimee Molloy

Then She Was Gone by Lisa Jewell

Out of the above books, I recommended Then She Was Gone by Lisa Jewell a couple of weeks ago because I could not believe it.  Just could NOT believe it.  A couple of you messaged me on Instagram and it felt so good to talk about it!!

I really liked The Family Next Door and Alternate Side if you’re looking for some good ole fashioned drama.

But after looking through my Kindle, I decided to highly recommend Seventh Heaven by Alice Hoffman. I read it back in March.  I really like Alice Hoffman’s writing and I’ve read every single one of her books.  This particular book should not be confused with the TV Series Seventh Heaven, by the way.  When I first typed the title into Amazon so I could grab the link, that’s what first appeared in the listings and then I wondered if I should try to binge watch all of the episodes this summer.  Am I the only Seventh Heaven fan out there?

The book, on the other hand, the hand that has nothing to do with a TV series whatsoever at all, takes place in the 60s and it is just a really good book.  It’s about neighbors and this quiet, perfect, little neighborhood where the men work and the women stay home and raise the families and what happens to that dynamic when a young, single, beautiful mother moves in. 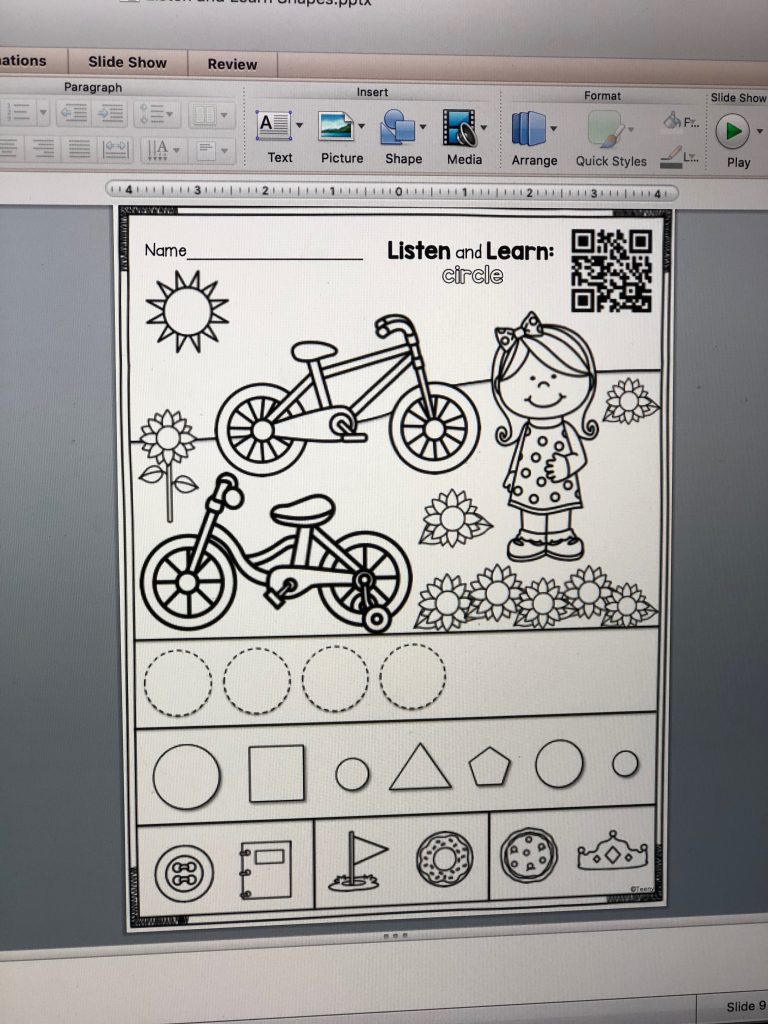 I have started working on Listen and Learn Activities for 2D Shapes!  I’m super excited to add this to my collection for next year.  I am hoping to have it in my store by Sunday, Monday at the latest . . . fingers crossed.  And then I’ll follow it up with 3D Shapes!

MORE MATH!!  I’ve gotten lots of requests for more Listen and Learn Math Activities so that teachers can use them during Guided Math Rotations.  I’m trying, people, I’m trying!

And that wraps up my first week of Summer Vacation!

SLOW DOWN, ALREADY, SLOW DOWN!