We left for a family reunion in Florida two Fridays ago, and I just couldn’t get my act together.  At one point during the trip, I did take out my laptop to blog, but the internet was super slow and so I gave up.  But I did try so someone somewhere can pat me on the back for that.

This post, ON A MONDAY, thank you very much, will just be a recap of our trip.  There is nothing school related whatsoever at all, so if you’re looking for Target Dollar Spot finds or cute decor things, today is not your day.  🙂

Steve has three brothers and one sister, and they are all spread out in North Carolina, South Carolina, and Tennessee.  His mom has been trying to get everyone together for years now, and this Florida trip had been in the works and on my calendar for a whole year.  We rented three beach houses all on the same street and had a really really really fun week!

Steve’s aunt and uncle (who live in California) shared a house with us, and then everyone else took up the other two houses.  We were supposed to have another aunt and uncle staying with us, and possibly a cousin, but they ended up not coming.  We had the quiet house.  🙂

All of his siblings are married and have been between two and four kids.  In total, there were 24 of us.  I KNOW!

We flew with Steve’s aunt and uncle into Atlanta, Georgia and then drove the rest of the way to Seagrove, Florida, which is a five hour drive and don’t ask me why we did it this way.  Steve was sort of in charge, and he swore up and down, and up and down that it was the shortest amount of TRAVEL TIME.  I don’t know.  I still don’t know.  I DO NOT KNOW, I SAID.

I had only ever been to Orlando, Florida for the TpT Conference a couple of years ago, and I basically stayed in the hotel the entire time and saw absolutely nothing so I was excited!

Seagrove is a little beach town outside of Destin.  It is so cute and within walking distance of Seaside and another little town called Water Color.  I LOVE THAT NAME FOR A TOWN.  Water Color!  I want that on my cute Return Address Stamp, let me tell you.

Mostly our week consisted of the beach, floating in the backyard pool of one of the houses, walking and exploring, eating, and lots and lots of talking.  Everyone was very go with the flow so a lot of the times, we would be at the beach with different family members than the day before, out to breakfast with someone else the next day, walking to get ice cream with just the nieces on another day, etc.  We went to an outdoor concert in Seaside, drove to Destin one day, drove to Panama City another day, went to the beach at night, had family dinners, a shrimp boil, a Father’s Day breakfast, a nice dinner out with his siblings while his mom babysit the younger kids, etc.

There was a Taco Tuesday Cook Off Challenge between Steve and his brother, Branden, which was super fun to watch and be a part of.  Lots of trash talking which would have made me cry had it been me doing the cooking, but instead I just taste tested mojitos for Steve’s mom and stayed out of it entirely.  😉  Our judge was his youngest brother’s  (Josh) girlfriend who hadn’t had either of their tacos before so she seemed like a neutral party.

The winner was Steve!  WOOHOO!  🙂  She said she loved how they were crispy on the outside but chewy on the inside, and this made Steve’s whole entire day because that is how he describes his tacos to anyone who will listen.

Our favorite nights were hanging out in the backyard after dinner just talking until well after dark.  It was so good to see everyone and catch up with everyone.  I loved having sisters-in-law for the whole week!

Here are some random pictures: 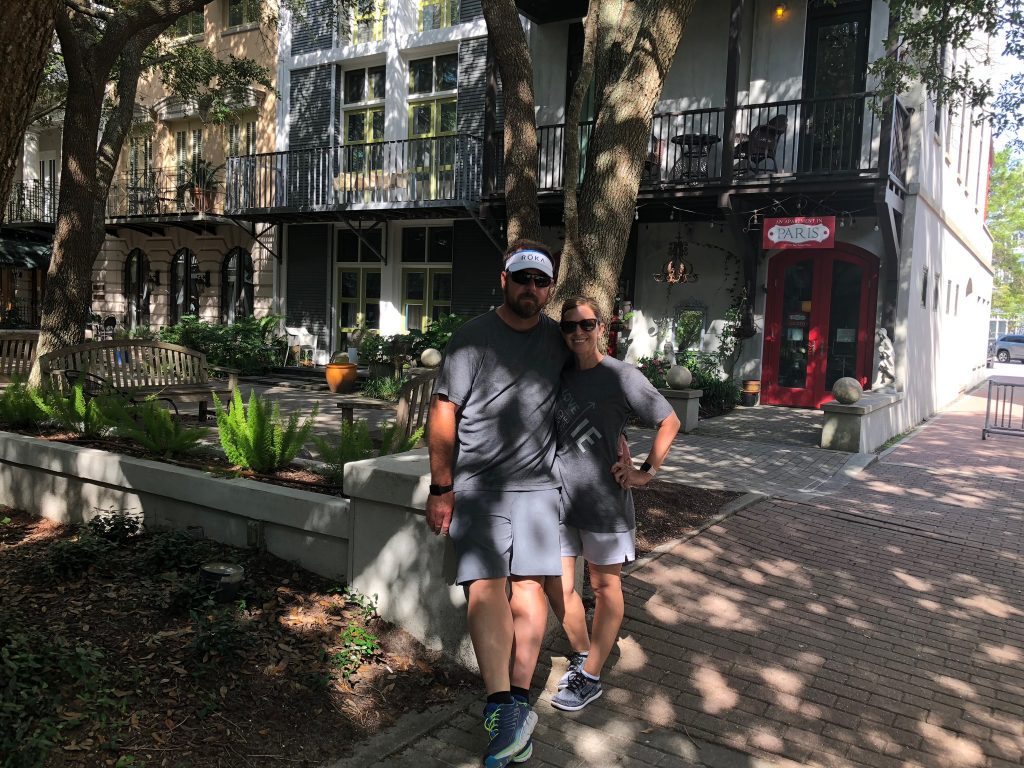 Steve and I walked almost every morning and we stumbled upon this adorable little courtyard situation in Seaside.  Isn’t is so cute?  I was ready to pick up and move there! 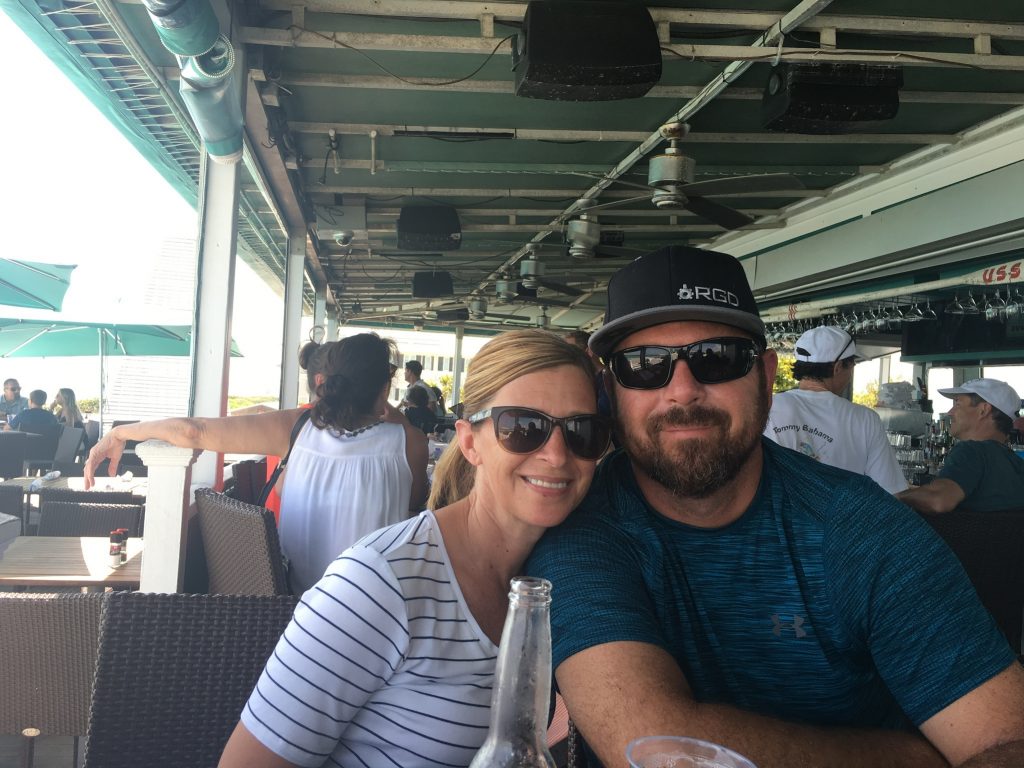 We were at a rooftop restaurant in Seaside for lunch.  Their chicken salad on a croissant was DELICIOUS. 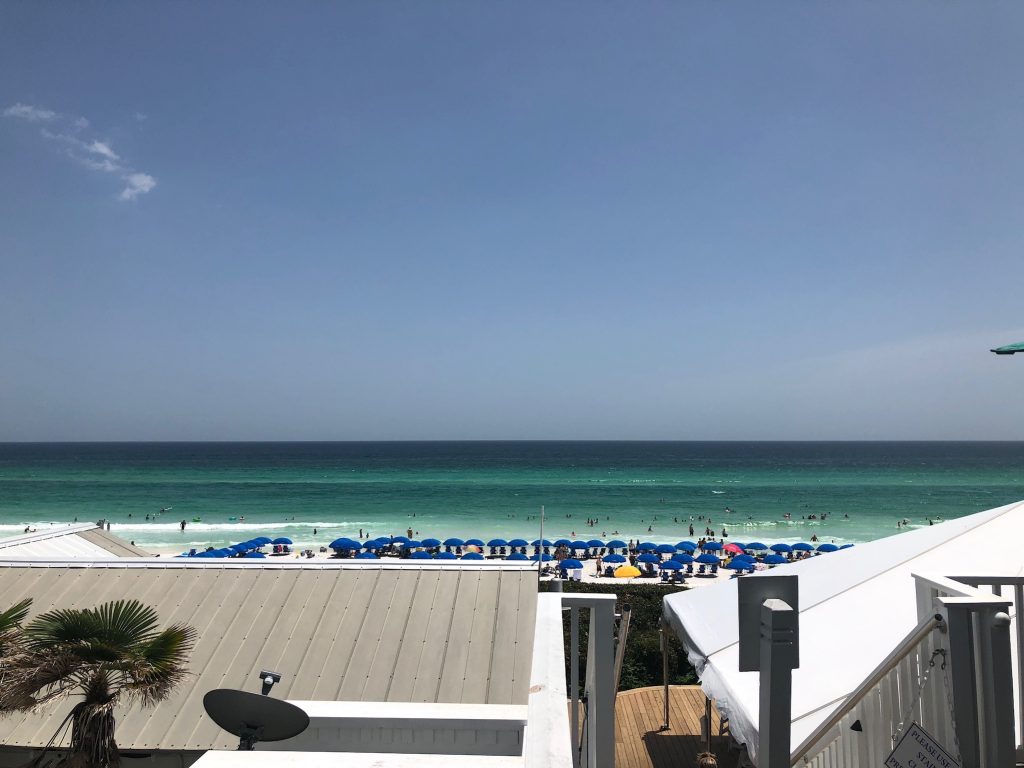 This was our view from the restaurant!  🙂 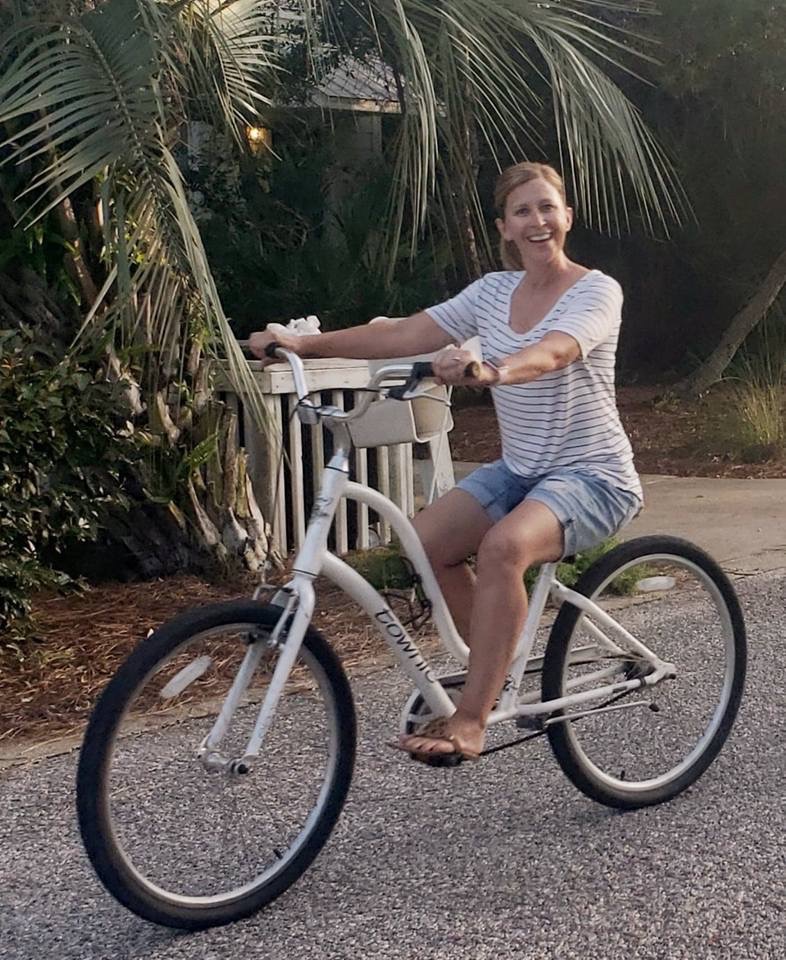 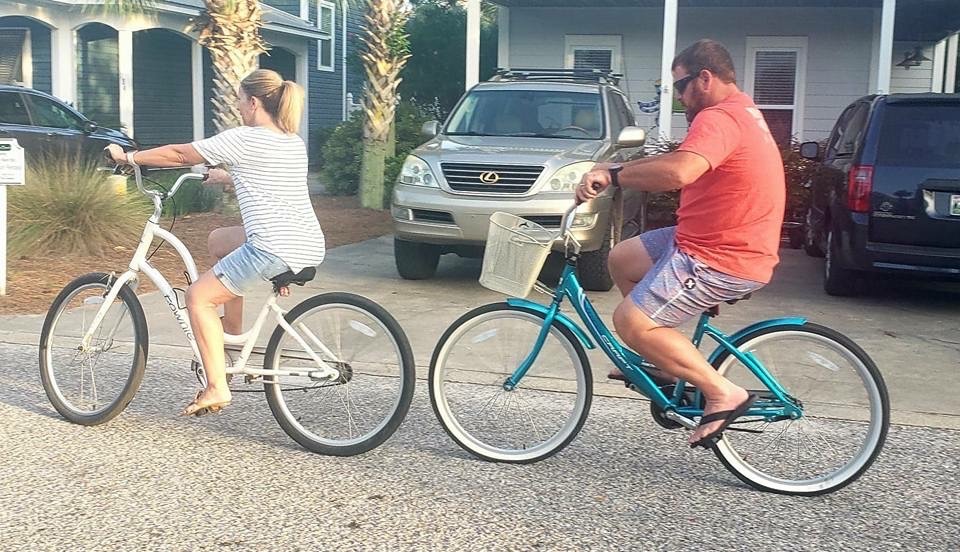 And then do you see Steve?  He is DELIBERATELY trying to bump my back tire because he thought it was FUNNY.

Hardy Har Har, I am laughing so hard.

I came this.close to running into a tree in slow motion.  I stopped myself by putting my hand on the tree.  This is especially funny because once, a long time ago, my family was in Yosemite on vacation, and we all rode bikes.  And my mom started calling out to all of us I’m falling, I’m falling! but when we looked, she wasn’t falling at all.  And then she did fall.  In slow motion.  She ran into a bush and kind of just fell over real gentle-like.  And once we knew she was okay, we died laughing.  We talk about it all the time.

So I was sort of channeling my mom, I suppose.  I don’t know.

The second time I almost ran into the same exact tree, I have no excuse because Steve was nowhere near me.  I decided I needed to get off the bike before I actually had a head on collision with a palm tree. 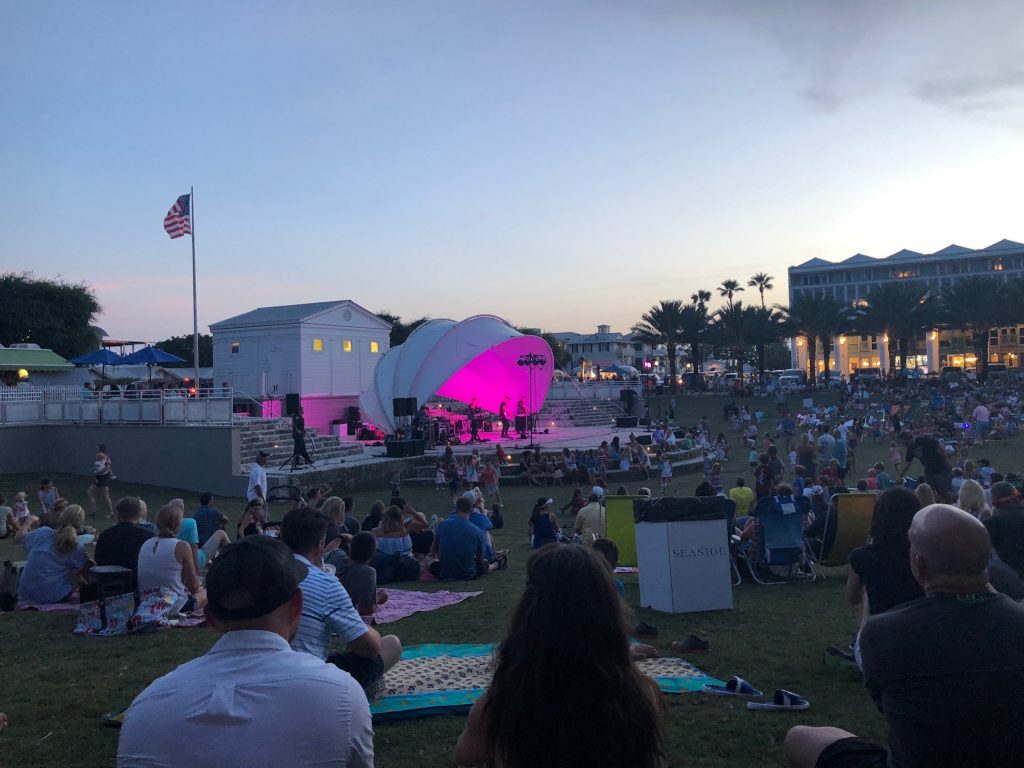 This was the outdoor concert.  See that little building behind the concert, next to the flag?  That’s the post office in Seaside.  I just can’t.  Isn’t it adorable?! 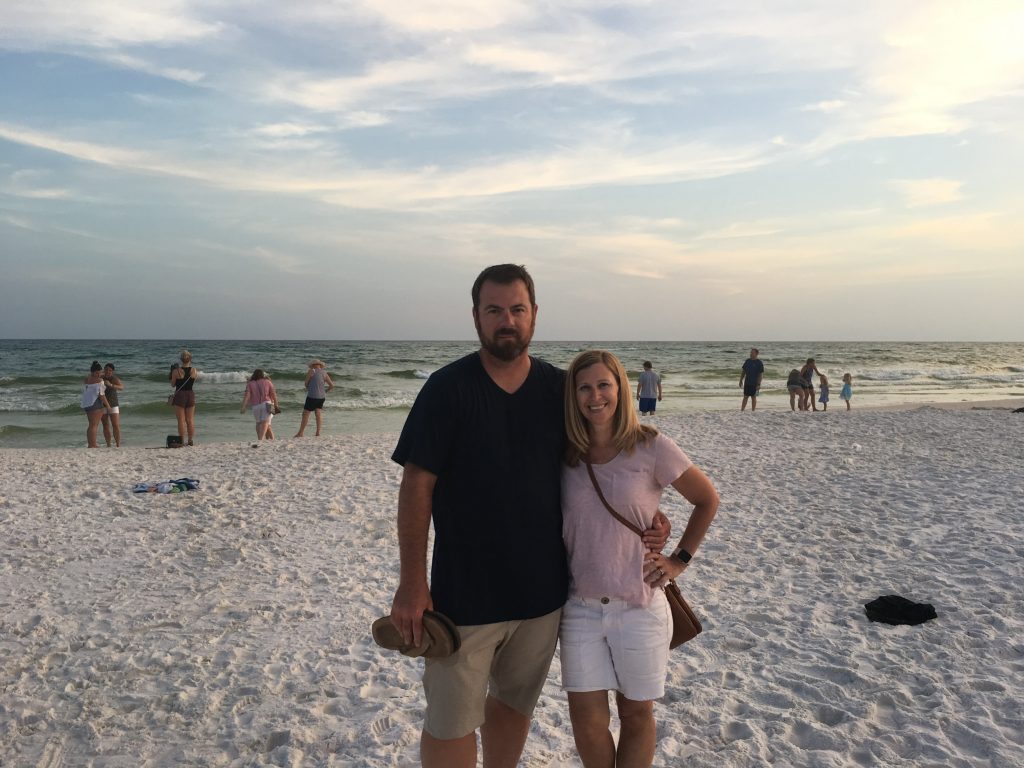 I have a ton of pictures that I could share, but they’re mostly family pics and you don’t know these people so I’m going to refrain from oversharing.

We had THE BEST time.  It’s always so good to be home, though, and we were so excited to see our Murphie girl.  We missed her!

Today, I am drowning in laundry and catching up on all my shows.

See you for Five for Fraturday!