I am back from San Diego.

The Dodgers lost and it is all my fault.
Before I tell you how, I’ll back up a bit.
The hubby and I got to the hotel just in time for lunch.  So we sat out by the pool and had a drink and some snacks.  The snacks were way better than the chicken caesar salad we both ordered.  I don’t know what exactly was wrong with the caesar salad, but it was not normal.  I mean, there was lettuce and there was chicken, and I think I found a crouton, and possibly some shaved parmesan, but it did not taste like a normal chicken caesar salad.  So if you go to the Marriott in San Diego, beware of the chicken caesar salad if you are picky like me.  However, it all worked out because the glass of Chardonnay was delicious.
Here we are in a selfie which makes me look gigantic and the hubby look small so next time, he should obviously hold the phone.  My arms are not long enough, apparently. 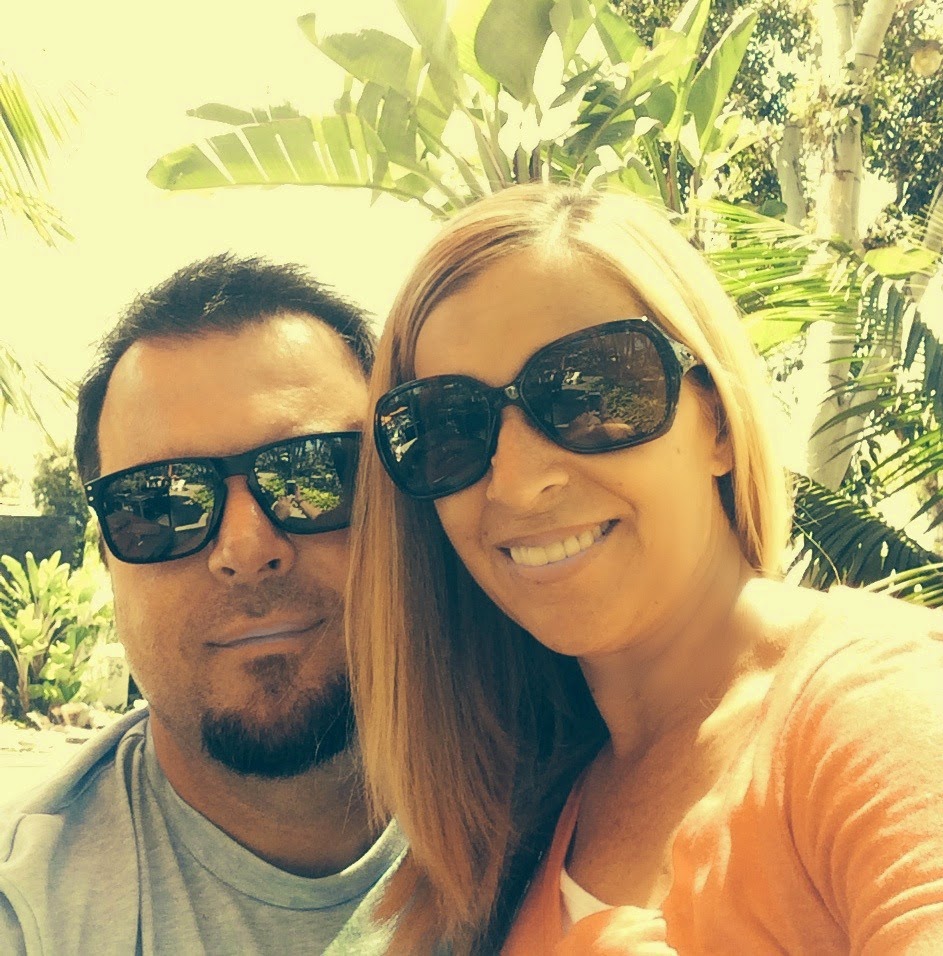 After my parents spent forever in traffic, they finally arrived, and we took off on foot for Petco Park.  It was hot and we were sweaty, but when we got to the park, we had the best seats at field level and they were in the shade!
So my mom and I took a selfie to celebrate.  And then we were photobombed. 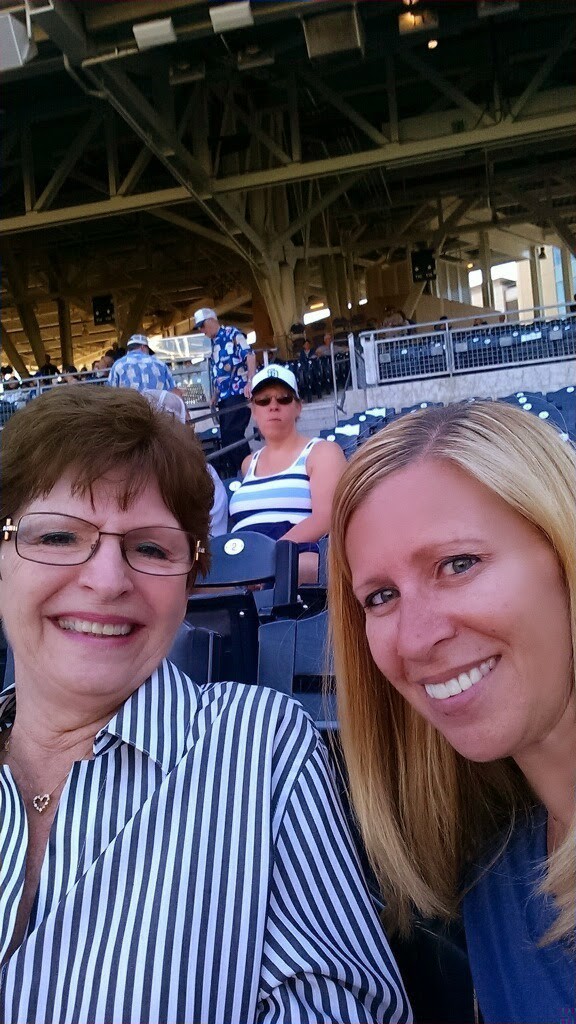 If you’re our photo bomber, please be sure to tag yourself.
We had a blast people watching and eating.  A ball park hotdog just never fails.  Neither do nachos or popcorn.  The Padres inducted Trevor Hoffman into their hall of fame so that was kind of neat to see, although I don’t know who he really is except that he was a beloved pitcher for them and he got quite emotional during the ceremony.  Oh, and his sons are very good looking as my mom pointed out.
Then the game began and it was a pretty darn good game.  The guy in front of me happened to have a huge head.  I’m talking gigantic.  So I watched the game in two phases.  The first phase was watching the pitcher pitch the ball, and then the second phase was scanning past the ginormous head to hopefully see what the batter would do.
Ho hum.
It was okay because I had food so I was fine.  I’m not the best baseball player watcher in the first place, and then when you give me food, I’m kind of really bad at the whole paying attention to what is happening thing.
We were in foul ball territory and a bunch of balls were foul, but none came near us.
Until one did.
As in, it came RIGHT AT US.
I acted as if we were having an earthquake and did a duck and cover.  Seriously.  I might also have yelled out to my husband and dad to COVER ME!!!  Never mind my poor little mom next to me.  Everyone for themselves is what I always say.
Well . . . the people directly in front of us caught the ball.
And then they dropped it.
And then I saw the ball below their seat.
So I got it.
Basically, it looked like this. 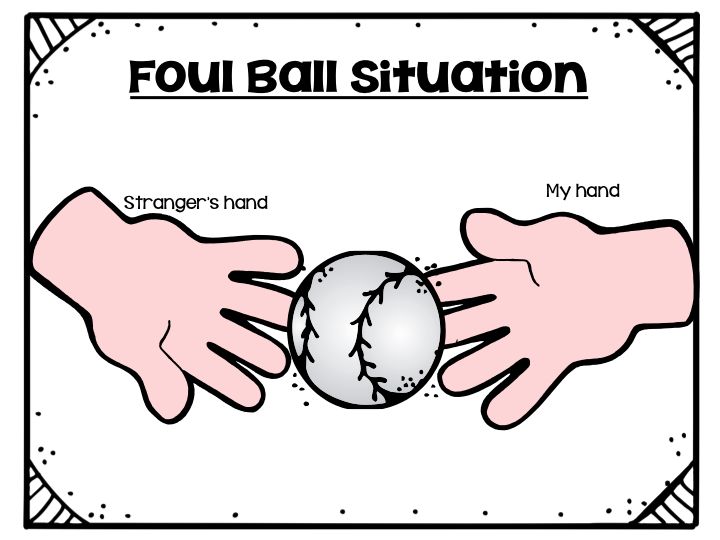 My hand is obviously way cuter in real life.
I got the foul ball.
I did.
I just picked it right up.
It was a first time for me.
And then I panicked.
Because I’ve seen all of those horrible news stories about a grown-up catching a foul ball, and then keeping it for themselves, and how the whole of America ends up hating this person because they took it right out of someone’s hands, and it’s usually a kid’s hands, and the terrible person is judged super harshly in the public eye and trashed all through the media.  I’ve seen it time and time again.
And, to be fair, the people in front of us did catch it first.  They did.
So I picked up the ball and handed it to them.
*****************************************************
Yes.  I picked up the ball and handed it to them.  Quite nicely, too, I might add.  Just a little gesture of kindness.  Here you go, I might have said.  For you.  Since you dropped it.  And I have manners.
OH, BUT APPARENTLY THAT WAS THE WRONG THING TO DO.
According to my dad and my husband, if you drop a foul ball, it’s FAIR GAME.
WHAT WAS I THINKING? they yelled at me.
WHAT DID YOU JUST DO? they said.
Then I looked for the news camera and the journalist with the microphone.
But she wasn’t there.  No one was videotaping this.  And I guess I could have kept the ball.
But I didn’t know!  I am here to tell you I DIDN’T KNOW!!!  If you put me on the stand (and I think my dad and my husband were ready to do that), I would say I JUST DIDN’T KNOW!
And it wasn’t like a Dodger hit the ball.  It was a Padre.  And I don’t need their stinking ball.
But apparently I did, as you will come to see.
The hubby and I went up to get some popcorn.  While we were in line, we were watching the game on the TV posted by the concession stand.  The Dodgers were at bat and we had two outs.   I said, “Well, it’s not like I want anything to happen while I’m in line at the concession stand, anyway . . . “
And sure enough.
CRACK!  The Dodgers made a home run.
And it was my fault that we were in line at the concession stand and not jumping up and down in our seats because I gave the foul ball away.

Then the Dodgers lost the whole shebang in an extra inning.
Because I gave the foul ball away.

After the game, we went back to the hotel and sat by a fire pit.  Our plan was to have a drink and a dessert.  You can never eat too much when on a mini vacation.
We ordered the churros.  I’d wanted them earlier at lunch that day, but I refrained.  I was trying to balance the chicken caesar salad with the ballpark junk food and didn’t want to over do it.
But then I had a change of heart after the whole I gave the foul ball away and the Dodgers lost and it was all my fault.
And besides, the churros were homemade and they come with chocolate dipping sauce AND dulce de leche dipping sauce, which is just a fancy way to say caramel, which is just another way to say GIVE IT TO ME NOW.
Except our waitress came back to say they had run out of churros.

Say it with me:  They ran out of churros because I gave the foul ball away.
Ai yi yi.
**PS My husband and my father were just giving me a hard time.  They both love me very much.
Really.
It’s true.
What?
« Five for Fraturday
Class Pet »