I have already talked about The Message Center numerous times.

Perhaps too many times.

But I’m back to show you my new and improved Message Center of 2016.

Because it’s even more genius than the original version.

The gist of the Message Center is this:  Kids write to one another and send the message by clipping it to a rope, and pulling on the rope so that it’s “delivered” to the other end.

I always wait until third trimester to introduce this center.

Here it is in action: 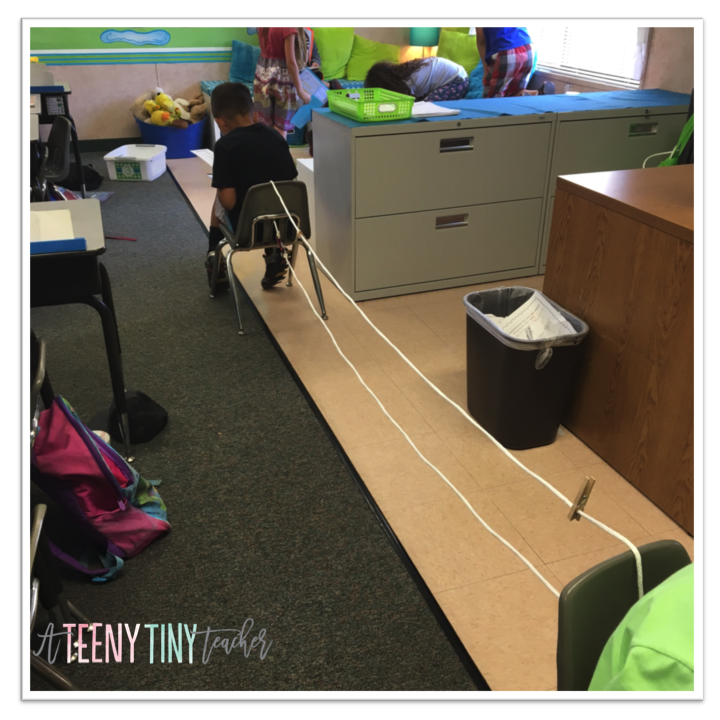 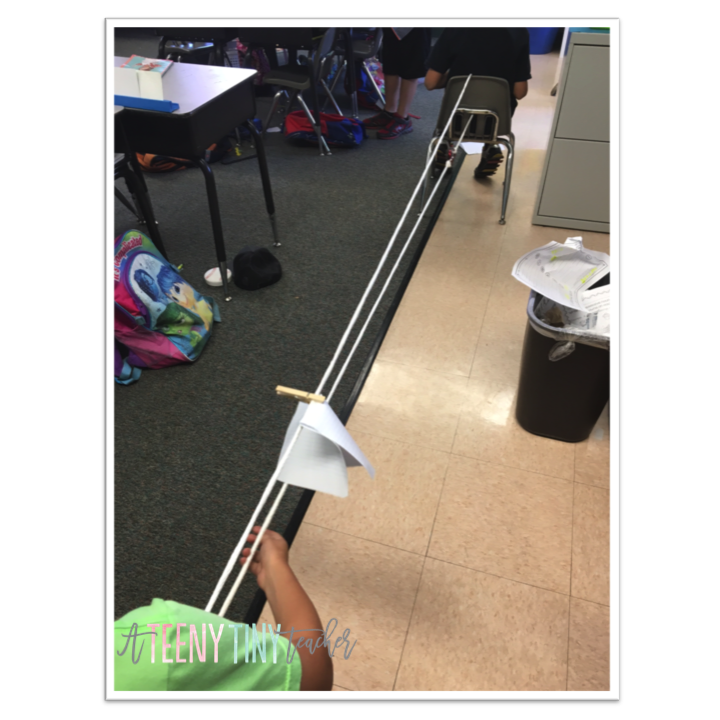 In the original version, you get two chairs, set them apart from one another, and tie a rope in between them.  Except you let the kids tie the rope together because you’re teaching and you’re busy and you don’t want to.

But it inevitably ends up that you have to tie the rope together because they can’t get it.  Or they tried for so long to get it without bothering you that now their time is up and they’re sad.

And let’s not talk about when it’s time to untie the rope.

Okay, let’s.  Even though you tied the rope loosely, it won’t untie, and the kids are loud and noisy while you’re trying, and no matter how much you try to pretend you’re on Survivor and you’re in a rope-untying challenge, and if you win, you get donuts, you can’t untie the darn knot quick enough.

So . . . as much as my kids LOVE the Message Center every year, I kind of end up hating the logistics of it.

This year – as in, last week, I said to Steve I need a buckle or something for the rope for Message Center.

And, being the sweet and handy husband that he is, he did not ask what’s the message center?  Instead, he said what kind of a buckle?

And I said I don’t know.  You know.  One that’s kind of flat.  Like you might find on a backpack.  Or a suitcase.

And he said I don’t know what you’re talking about. Tell me what you need.

And I said I thought I just did.  I need a doo-hickey so that my kids don’t have to tie rope!

Well, after about ten minutes of that, Steve decided I needed a carabiner.  And he pronounced it Cara – Beaner.

And I said okay then, where do I get that?

And the next thing I knew, Steve had gone to Home Depot, bought rope, two carabiners, and two rings. 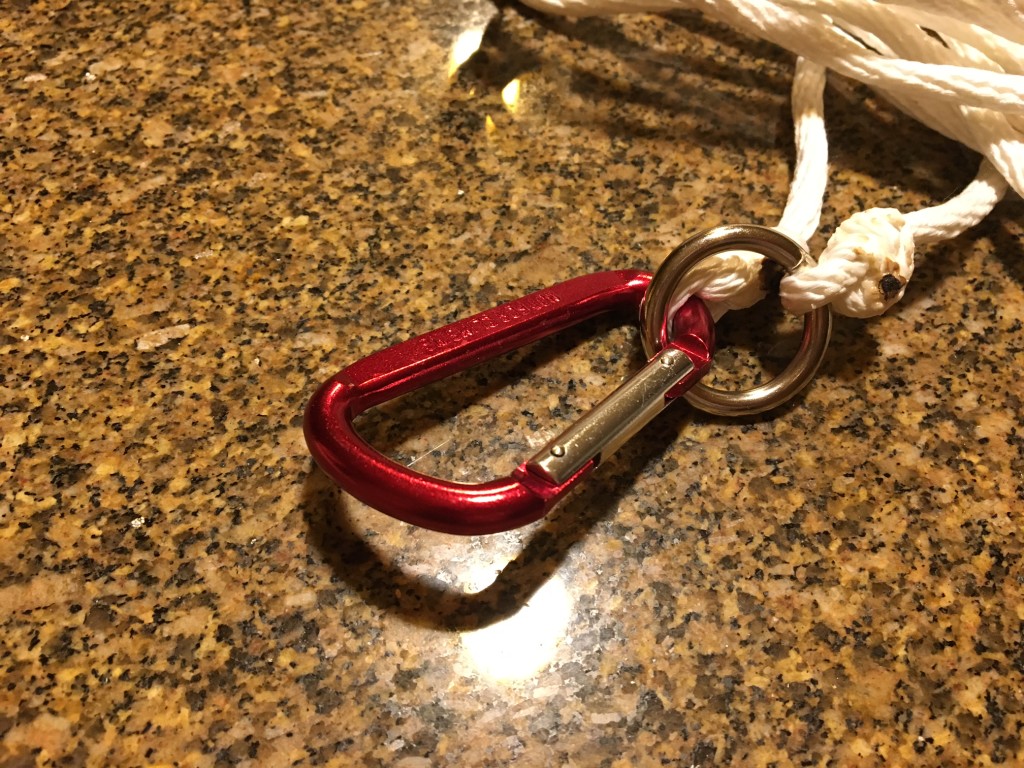 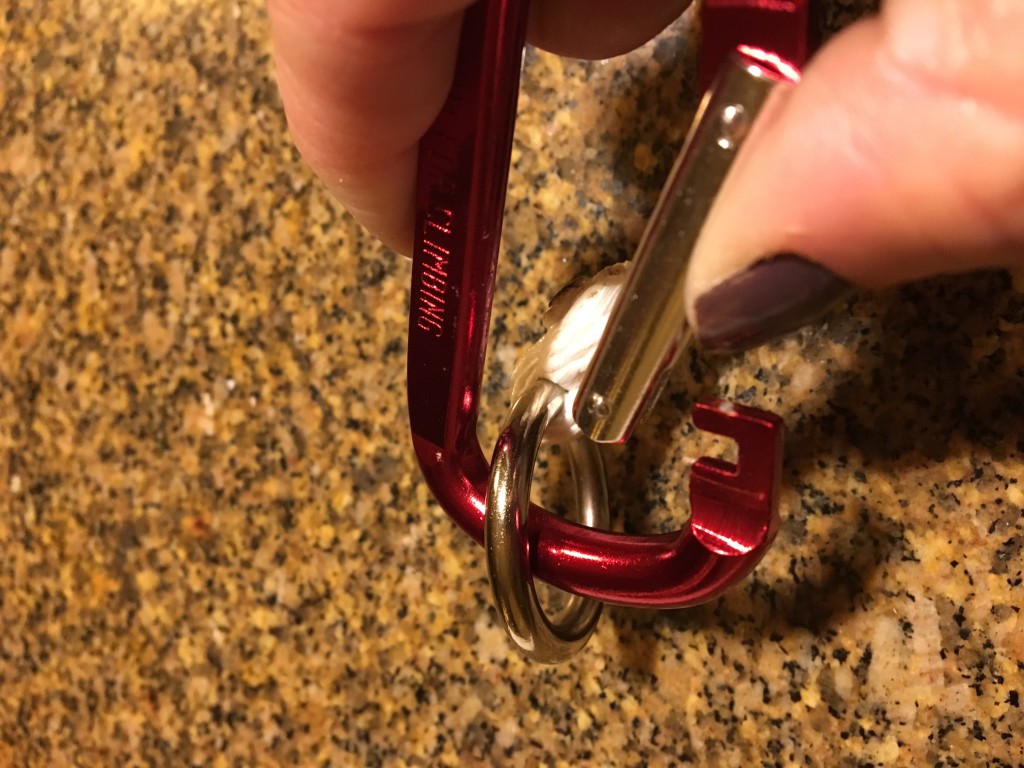 Tie the doo-hickey to one end of the rope and the ring on the other end.  Then, you just push the silver part in like a door – A DOOR – and slide the ring on (or off).

I put each rope in a separate ziplock bag so there would be no tangling of the ropes (also an issue with the older version) and presented the center like this: 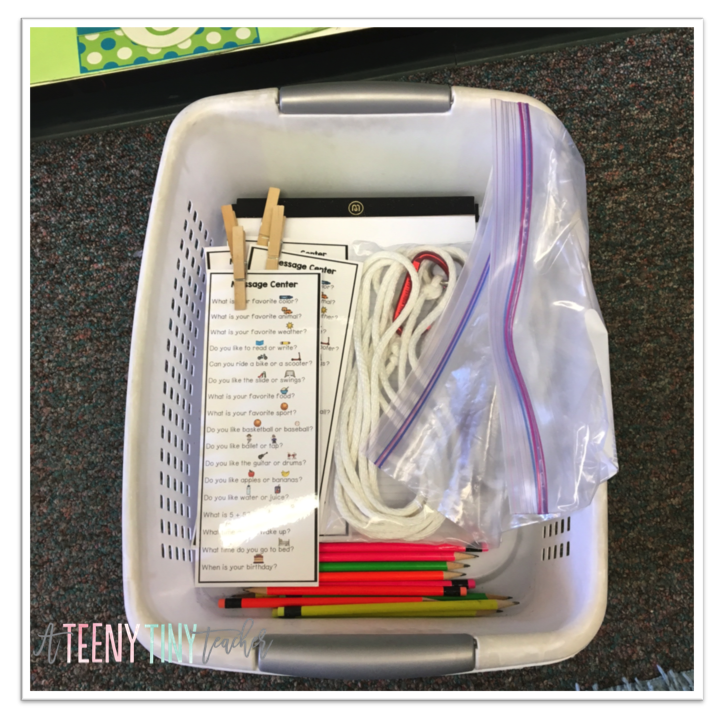 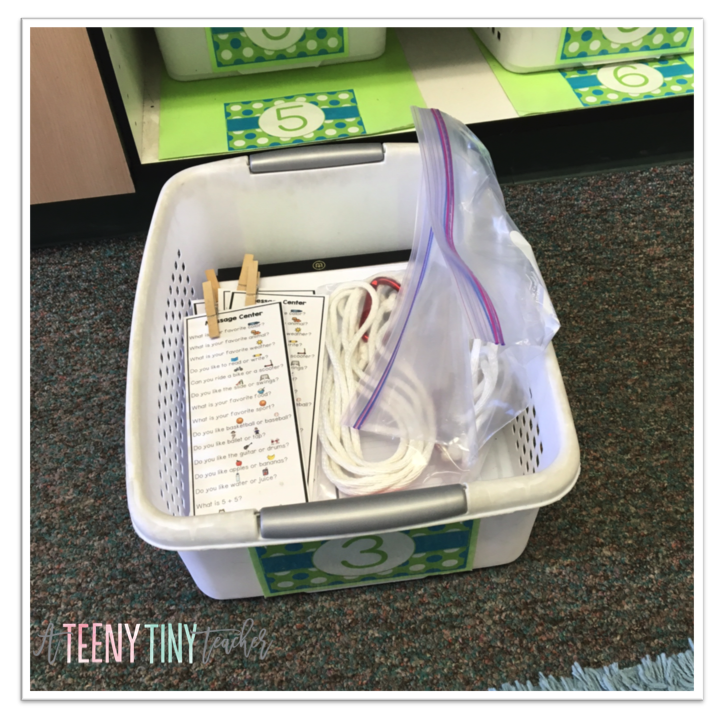 I randomly found 4 notepads in a cupboard and sharpened some new pencils.

And this year, I typed up some quick questions as a guide for those kids who either struggle with writing or struggle with being appropriate.  Take your pick.  😉

It really helped!  I printed them on cardstock and laminated them.  Besides having a guide for questions, when each partner received the message, he or she had to ANSWER the question.  So it’s a win-win in the writing department. 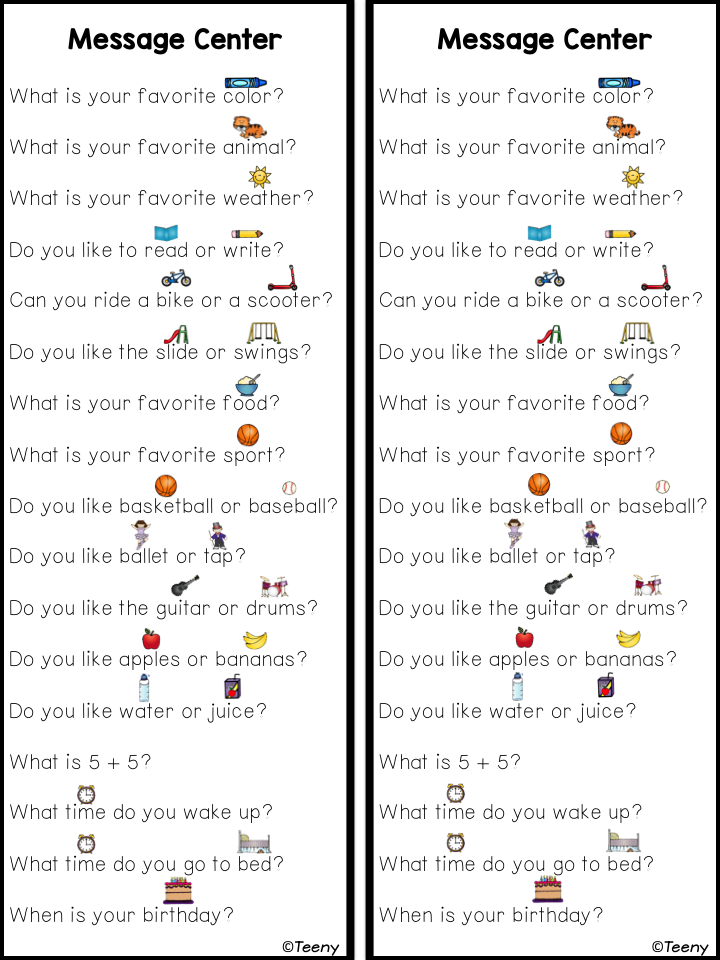 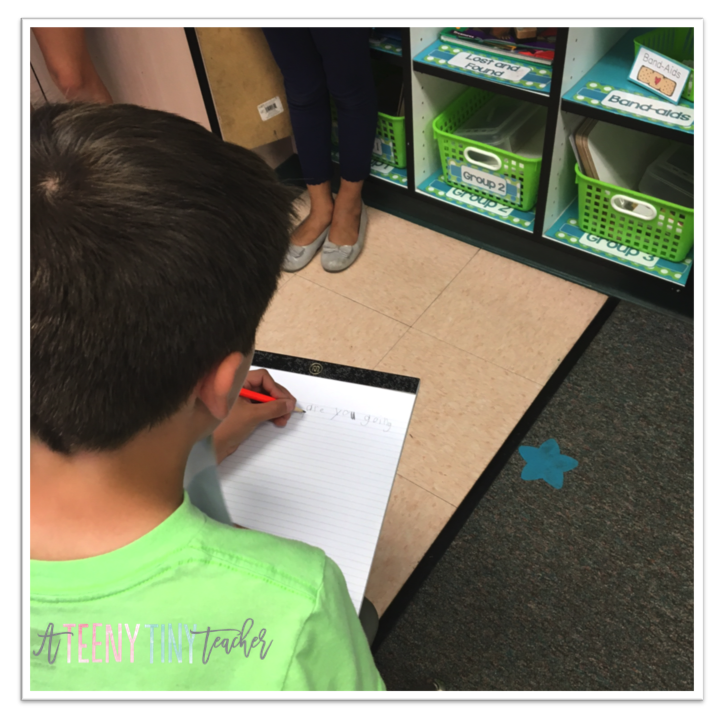 See the little feet in the gray flats in the background?

She’s at the I’m just watching The Message Center Center.

Which is not really a center.  She just made it up. 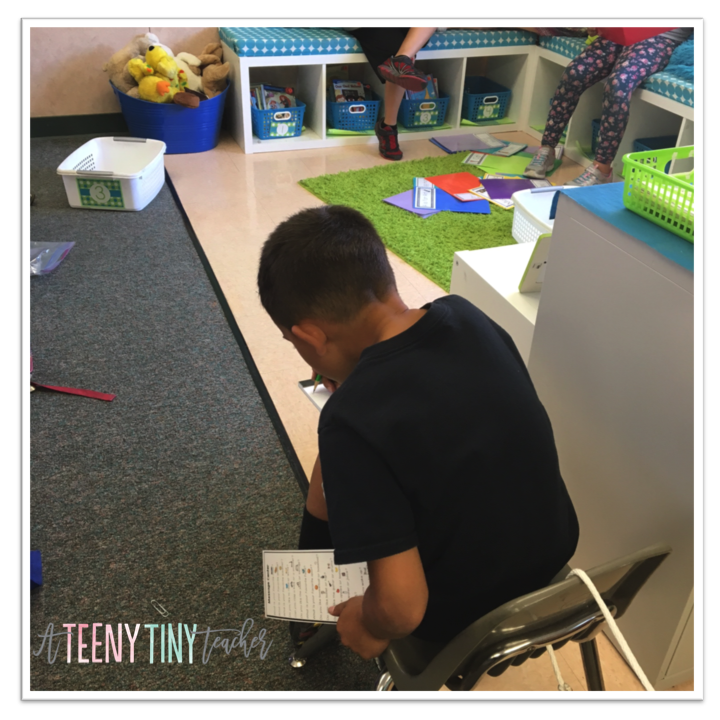 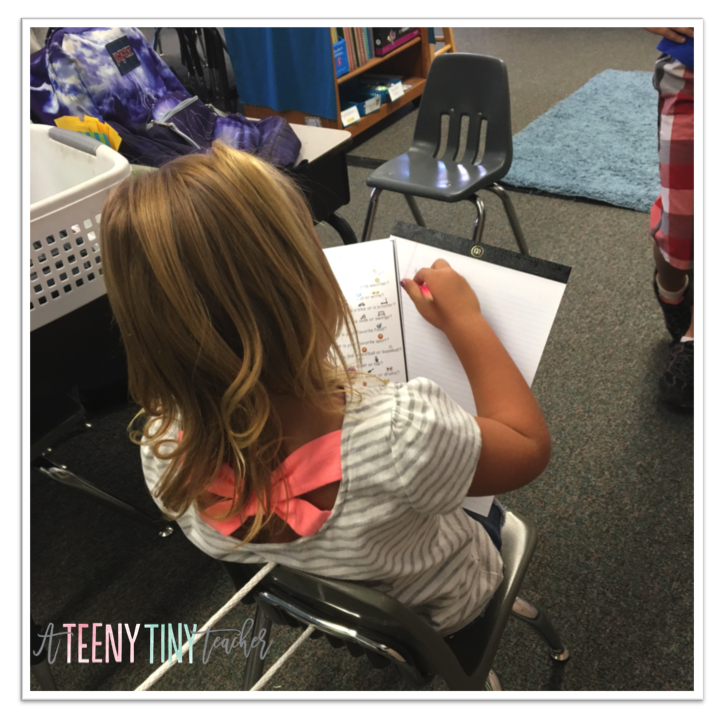 The doo-hickeys worked like a charm.  I couldn’t believe how fast the kids got it up and running.  No tying, no untying — they just pushed that little silver door in of the carabiner and they were good to go.

The clean up was a breeze too!

And there you have it.  The Message Center – New and Improved!