Instead, I will blog.

So even though we got all our recesses yesterday, it was kind of boring.  I know I said I was glowing and rainbows and birds and other things were shining all around me, but it was just a regular day.  Curriculum.  The same old.

So last night, I had a brainstorm.

I woke up my teaching partner in order to have this brainstorm because I prefer to be in storms with others.  Don’t you?

Anywho, I let her go back to sleep and this is what I came up with.

We are on Houghton Mifflin Theme 5, Week 2.  This covers the story “Me on the Map”.

Fine.  We just also happen to be studying the continents in Social Studies, but that’s neither here nor there.  Especially since we don’t actually “theme” teach where I am.  It’s just a happy coincidence.  If you’d like to call it that. 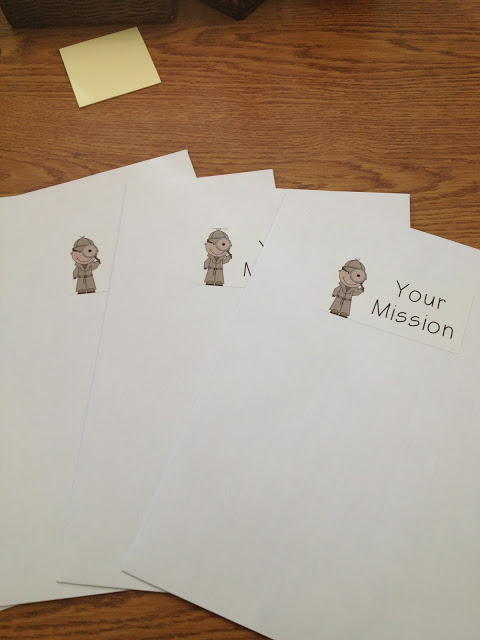 Rather than follow up the story with the dry, plain, vanilla, blecky worksheet, I copied maps of our school.  (Instead of a list of teacher names and class phone numbers, we have a school map.  This might be due to the fact that we used to rotate rooms back when we were year round.  Anywho, I have a map by my phone and that’s how I call my people.)  I gave each kid a school map.  And then I instructed the kids to draw a map of the inside of their house on the back.  That was to keep them busy.  It might have even been in the curriculum.
THEN . . . I called one table group at a time to bring their school maps with them and I handed them an envelope.  I told them they couldn’t open it until they were outside. 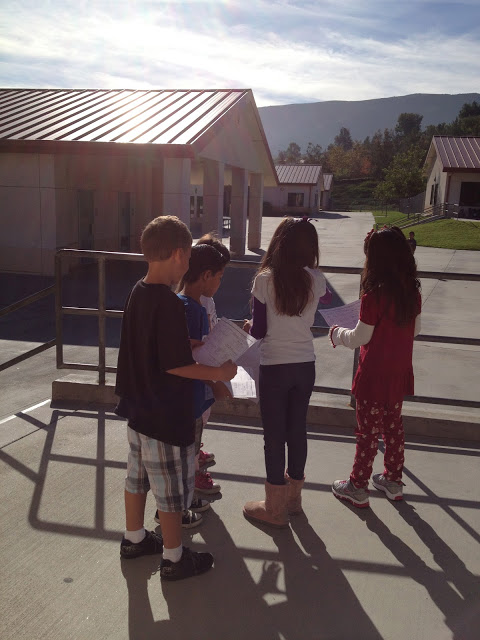 By the way, I gave the Table Captain the envelope so no one could argue.
Inside was this: 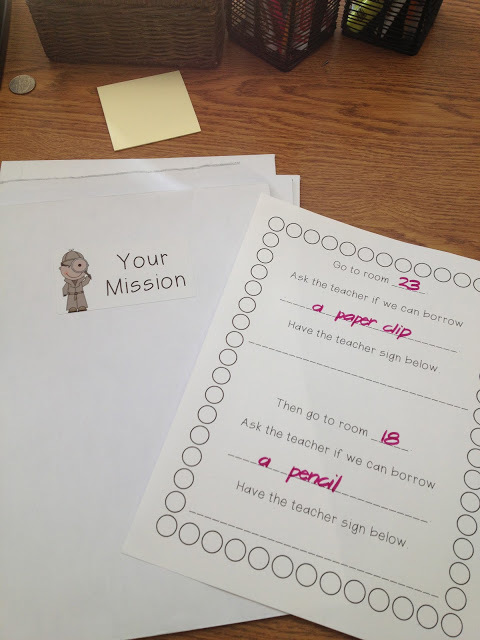 Our campus is huge.  I don’t know if you remember that from my post “Teeny Tiny Teacher to the Rescue“, but if you need to see my school map, you can check there.  Anyways, most of the time, it’s way way way way way easier to call an upper grade teacher to borrow something (say, like, um . . . oh, I don’t know.  I can’t think of any reason why I’d call an upper grade teacher instead of just going next door and bugging my partner . . . but it happens, trust me.) . . . Anyways, it’s way easier for the upper grade teacher to send an upper grade kid to ME, rather than me send an itty bitty first grade child with absolutely no sense of direction and who also just got off the kindergarten playground not two seconds ago to THEM.
So this mission was a BIG DEAL.
(PS I called ten teachers this morning to make sure my students could bug them, plus also I needed spies to tell me if my kids were running around campus and acting like hooligans and jumping in the bushes and picking flowers and killing ants and playing leapfrog or any other number of things.)
(PPS I told my kids that I had called every.single.teacher on campus, plus the custodian, and the lunch ladies, and the secretaries, and the PTA moms to tell them what we would be doing so I would know if they were fooling around, and then I made them promise to be good.  Some weren’t actually doing a very good job of promising so then I had to tell them that I also called Santa because I know his number.)
I didn’t give the kids any hints at all.  I said, “Use your map and go.”
Well . . . a really long time passed and that first table group never came back so I decided I should send the next table group before we ran out of time.  So I sent six more students out of the room and handed them their envelope.  I told them not to talk to the other group because they had a different mission and they were not allowed to help each other.  True.  Each group went to two different classrooms for a total of ten classrooms because I didn’t want my kids interrupting the same poor two teachers all morning. Also, only the Table Captain was allowed to enter that poor teacher’s room.
Let me tell you.
This lesson was a hit!  Not only did my kids go out and hone their map skills, but twelve children were out of the room ALL AT ONCE.
It was quite a bonus.
Once one table group came back, I sent another.
All went well until I realized recess really was coming up pretty fast so, at one point, I had to send three groups at once.  It wasn’t my fault.  It was only in the interest of time.
The twelve of us remaining just had a grand ole time.  Quiet but grand.
Here’s the scoop.  The ending.  The summary.
Two table groups were completely successful.  They brought back the items I needed (chocolate and money never hurt anyone), plus they had the teachers’ signatures.
One group brought back the items, but only had one teacher signature.
One group brought back items I did not ask for and no teacher signatures.  I got a glue stick and a staple.  I specifically asked for a candy cane and a credit card.
The last group?  Well, we watched them circle our room through our windows a few times . . . then we saw them head towards the kinder playground (because there must be classrooms on it that they missed last year . . . surely) . . . and then they finally returned with one item (coke zero) and no teacher signatures.
The ringleader of that group decided the map was wrong.
Um, I think not, ye of little map skills who did not bring me back my cupcake!
Next year, I think I will only send them to one classroom . . . not two.
Other than that — super fun!
You can click on the pic to download your copies.  I have a sheet for a two-classroom mission, a one-classroom mission, and also some in color for little envelopes if you don’t have the mac-daddy ones like me.  I also included some fun labels for the envelopes. 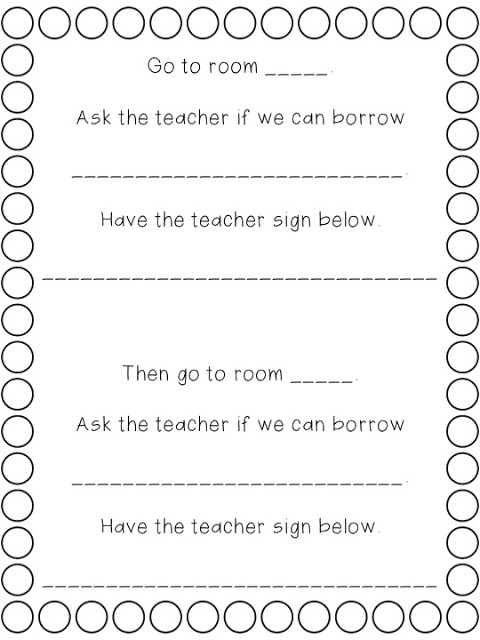