It starts out with the girls saying how they’re so exhausted.  I mean, it must be so exhausting lounging around by the pool all day and running to the front door every five minutes to see if a date card has arrived.  I get it.  I’m often lounging on the couch and running to the front door to see if my latest Amazon prime shipment has arrived so I totally sympathize with how exhausted they are.  The struggle is real, people.

They learn that Ben is no longer in Los Angeles and, instead, in Las Vegas.

There was a sign outside the Aria where the girls were staying that lit up and said Ladies, Welcome to Las Vegas, Can’t Wait to See You – Ben.  The girls fuh-reaked out and hurt my ears.  They do understand he is just a man and not Thor, right?

Jojo got the first one-on-one, but you can rest assured that Olivia was not threatened at all because she was at peace with Ben.  Ben is her Zen.

Jojo and Ben went out onto the roof or a helicopter pad or something to have a glass of champagne, but when the helicopter arrived, it blew the table and champagne and glasses all over the place.  Bad idea, ABC.  BAD IDEA.  They had to take cover behind the table so Ben took that opportunity to kiss Jojo.

The ladies could see all of this happening from the hotel room so they were disgusted and walked away from the window.  At first, they thought it was hilarious that the romantic moment of the champagne and rooftop was ruined by the helicopter . . . but when the kissing started, they were not amused.

That’s when Olivia started to get worried.  She was not okay with this.  NOT OKAY, she said.  She is in love with Ben.  She wants him to be her husband.

This all translates into she is a FIVE ALARM STALKER.

I’m going on record right now and saying BEN SHOULD NOT PICK HER.  For anything.  Nothing.  He shouldn’t pick her for a group date or a one-on-one or a two-on-one or even to empty the dishwasher.  I repeat, DO NOT PICK OLIVIA, MR. BEN.

Later that night, Jojo confided in Ben that she had been cheated on and how she had insecurities and this and that . . . so they bonded and then he took her out on another rooftop and surprised her with fireworks.  They didn’t even look at the fireworks.  They just had another big ole make-out session.  But the fireworks and the soaring music of romantical proportions drowned out any kissing noises so it was okay, I suppose.

When the fireworks were going off, the girls could see and hear them which made Olivia feel as if her husband was out there cheating on her.

Her husband.  Ben.  The man she is supposedly “dating” on a “dating show” with at least fifteen other girls.  But she called him her husband.  Olivia needs a dictionary.

The group date was next.  They met a ventriliquist named Terry Fator (who is hilarious) and they kind of put on a talent show of some sort.

The twins could do Irish dancing, Jubilee could play the cello . . . and Olivia said she has a surprise talent.  Hmmmm.  It involved shimmy-ing.

And just like every other Bachelor and Bachelorette season, these girls had to perform in front of a LIVE audience.  They were actually the opening act for Terry Fator.

Again, Olivia wasn’t worried.  She was going to go after her man.  When she’s around Ben, well . . . Bam Shazam.  That’s what she said.  Let me translate Bam Shazam for you.  It means Olivia’s Crazy.

The show opened and there were a bunch of different acts that seemed to be going just fine, like the Irish dancers, and a chicken, and a juggler and I don’t know . . . the girls were doing whatever they could, and it was fine, and then it was Olivia’s turn.

And she jumped out of a cake.

And then she proceeded to dance.  Or be a Rockette.  Or be someone who can’t dance, but was trying to be sexy, but it’s not working because she can’t dance and it didn’t look right.  Ben was DYING.  Dying.  He seemed embarrassed for her.

I can’t dance.  So I only do it in private.  And jumping out of a cake is a complete waste, if you ask me, because cake is meant to be eaten.  With ice cream, obviously.

When it was all over, Olivia broke down and had a panic attack.  She felt bad about her performance and said that Ben only gave her a pity hug.  She started regretting her decision to be The Girl That Jumps/Falls Out Of A Cake because she came on the Bachelor to be marriage material, but she felt that she portrayed herself to be otherwise.

At the Let’s Have Drinks, The Talent Show is Over part of the date, Caila and Ben wandered off and she just pretty much sat on his lap and attacked him.  Oh, and her dress was so incredibly short, I couldn’t honestly believe that she was wearing it as a dress.  IT WAS SHORTER THAN SHORT.  Her legs up to her pelvis were just plain ole naked!!!

Then it was Lauren H.’s turn (kindergarten teacher) for some alone time and we don’t know that much about her, but she kind of has a dirty mind.  For real.  She always says innuendos.  Good grief!  Teachers — you just can’t take them anywhere!  😉  They also did some kissing.

I’m starting to lose count on how many women Ben has made out with, but I really don’t think he discriminates — if you have lips, Ben will find them.

Olivia took Ben aside and told him how embarrassed she was, and that she was trying to be sexy and awkward and blah blah blah . . . reassure me, help me, kiss me, make me feel like we’re still married since you’re my husband . . . but Ben said it wasn’t bad (BEN!) and then one of the twins came and interrupted them.

Olivia felt like she blew the whole conversation and she was scared.  By the way, Olivia is twenty-three!  TWENTY-THREE YEARS OLD!  She seems so much older to me!!!  What do you think????

His one-on-one time with Lauren B. (flight attendant) was sweet and nice.  She likes him, he likes her . . . boy likes girl and girl likes boy . . . kiss kiss.

The other twin had some alone time with Ben, and Olivia interrupted them because she had to make things right, and she couldn’t go to bed like that, and she had to kiss him.  So she did.

In the end, Ben gave the rose to Lauren B.

Amanda was sitting right next to him and he just didn’t care.  HE JUST DIDN’T CARE. 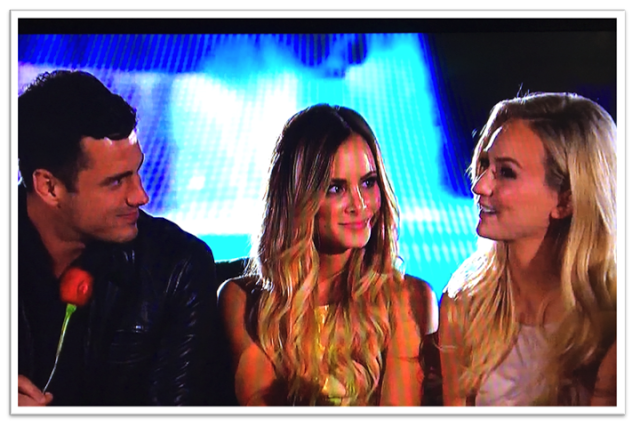 Amanda is in the middle.
But he’s about to give the rose to Lauren B.
There was no excuse me, Amanda, or maybe I’ll stand up so I’m not actually reaching across Amanda to hand this rose over to Lauren.
Nope.  None of that. 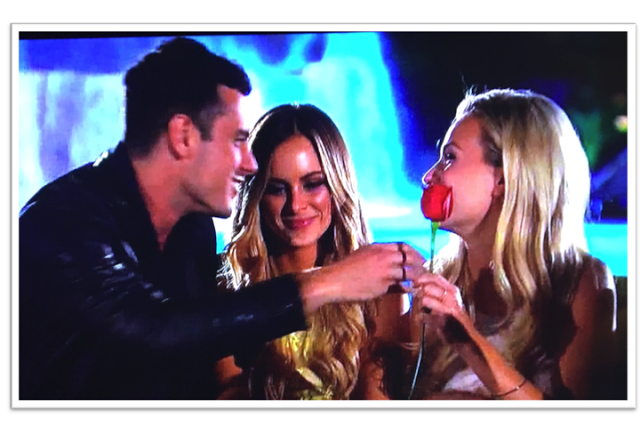 Holy Awkward Melt Into The Background Is This Really Happening Right Now Moment. 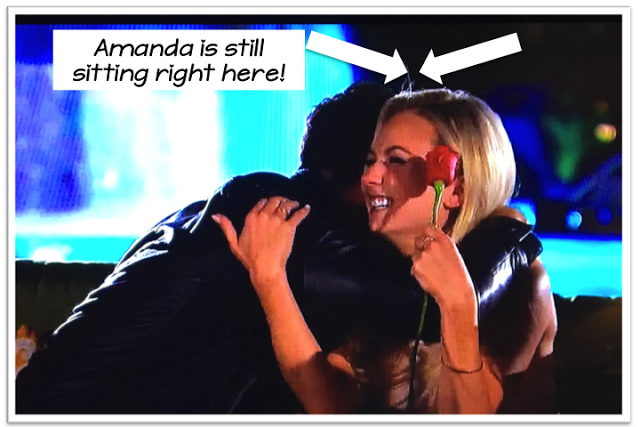 And then Ben hugged Lauren.
I think Lauren understands that this is weird and that
they either need to include Amanda in the hug or not hug at all, but there was nothing she could do about it because Ben just lunged at her.
And Amanda is back there.
Being swallowed up in someone else’s hug.
I seriously can’t get over this.

Next was Becca’s one-on-one.  A wedding dress was delivered to her hotel (she looked amazing in it) and then a pink convertible picked her up and took her to a wedding chapel where Ben was waiting.  Ben got on one knee and asked her if she would marry other people with him.

He got ordained.  That’s why.

So then they married a a bunch of couples all throughout the day.  At the end of the day, Ben took Becca to the Neon Museum.  They had some deep conversation and talked about feeling the feelings and how her virginity is because of her faith, beliefs, morals, values, and commitment to God, and Ben likes that because it shows how good she is at commitment.

And then they made up wedding vows and told them to each other. It was really sweet.  Really.  They were definitely connecting.  He likes her.

The next day, Chris Harrison showed up at the girls’ suite to tell them that Ben requested a two-on-one date with Emily and Haley, the twins.  The girls are from Vegas so Ben took them home.   Because they still live there.  In their mother’s house.  Because they are young.

YOUNG.  They have bedrooms in their mother’s house.

He had a little one-on-one time with each of them and then pulled their mom aside to get her perspective.

And then, right there in their house, in front of both girls and their mom, he said it’s time to say goodbye to Haley.


So Haley cried and Emily cried (until Ben kissed her in the back of the limo).

The next day was the Cocktail Party Before the Rose Ceremony and after Ben made his speech, Jen was the first one to say she was going to steal him.  Everyone was happy that it was Jen who first out of the gate and not Olivia.

Not three minutes went by and Olivia was there to interrupt.  THIS GIRL!

She had to repeat herself about how she was awkward and blah blah blah and he told her he didn’t need her to apologize, and she told him she is falling for him, and the next thing you know, Olivia believes that he sent her another message.

And she heard it loud and clear.

I didn’t hear anything.  Because Ben didn’t actually say anything.  But Olivia hears secret messages from Ben and I’m betting she hears voices, too.

Olivia told Jojo about their conversation and said that Ben reciprocated his feelings for her (which was a bold faced LIE).

Olivia was the last to receive a rose again.  Amber and Rachel went home.

Amber was distraught.  It was kind of sad.  And dramatic.  She cried on a lounge chair pillow outside.

And that wraps it up.