Well, how the Hello Kitty are you doing today?

Haha!  Kristina Armstrong has coined the new phrase and now everyone is using it.  I LOVE IT.  And all of you do, too!  Hadar reminded me that I also loved Vin Scully’s catchphrase, “HOLY FERTILIZER!”  And I did.  But I forgot about it until now.  So now I’ll have two different phrases to throw out when people are bothering me.  Or circumstances are bothering me.  Or if I stub my toe.

Remember way back a long time ago like last year when I told you about the music box and how I use it for classroom management regarding noise level?  No?  Well, I did.  You can read all about it {HERE}.

Anyways, my music box was about 12 years old.  Give or take.

And it was falling apart.  And Pooh wasn’t wearing pants which was embarrassing for everyone involved except, possibly, maybe Mother Bear who is a downright floozy so she doesn’t count. 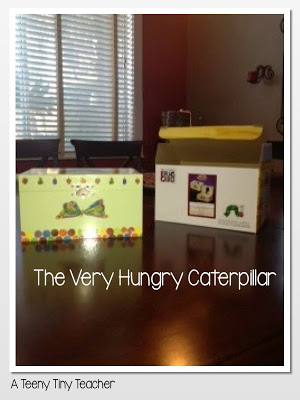 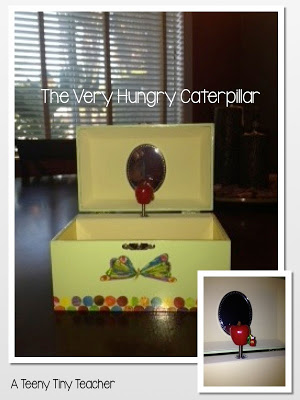 I know!!!!  I’m dying too.  Number one:  It’s green.  That happens to be my favorite color.  Number two:  Apples don’t wear pants so it’s okay that it’s not wearing any.  Number three:  Ditto with the caterpillar.  I mean, how would a caterpillar get all of its legs into a pair of pants anyways?
Wait.  Bears don’t wear pants, either.
But Pooh wears a shirt.  So he either needs to lose the shirt and join a Nudist colony or get some pants already.
Number four:  Instead of the Pooh song, it plays Fur Elise which is absolutely beautiful.  I told my kids I love the song and might leave the box open extra long just to hear it so they might want to think about not making any sudden movements or noises at all.  It was just a tip.  I’m always giving out tips.
I also love that it’s brand new.  It closes.  And I don’t have to give the apple a little push every now and then to get it going.
I was always pushing Pooh.
Oh, that doesn’t sound right at all. 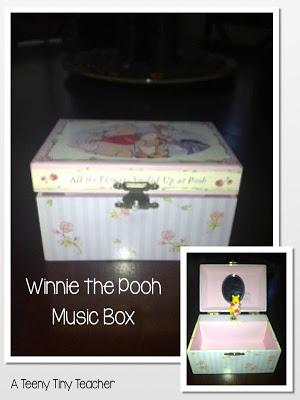 Broken clasp.  Never closed.
And Pooh.  Pantless.
Holding Piglet.
RUN, PIGLET!
If you’re interested in a Very Hungry Caterpillar music box of your own, I found mine {HERE}.  They have other kinds, too, but I just really felt that The Very Hungry Caterpillar goes with a classroom.  Right?
I brought my Pooh music box to our grade level meeting today.  I tried to give it away.
There were no takers.
Poor poor Pooh.
Oh well.  At least he has Piglet.
« Questions Answered
Five for Fraturday »