I don’t know how I’ve waited this long to write about Vegas.

It’s all I’ve wanted to write about, but I had obligations.  Things to do, let’s say.

Last year, it took me three posts to write about Vegas.  I have no idea about this year . . .

I flew in to Vegas with my hubby, Annie of the Moffat Girls, and Traci of Dragonflies in First.  Yes, I am name dropping.

I am dropping names.  If you don’t like it, I highly suggest you click out of this post because I am going to be name dropping all the way through it.

We stayed at the Venetian again.  It has truly ruined me for any other hotel and now I’m practically a spoiled princess and the Holiday Inn is just not going to do ever again.  Ever.  Again.

I took off to meet up with the Freebielicious crew at our BOOTH!  Yes, we had a booth!  We had candy FOR FREE and a giveaway for an iPad Mini.

I didn’t win the iPad, but I did eat a lot of candy. 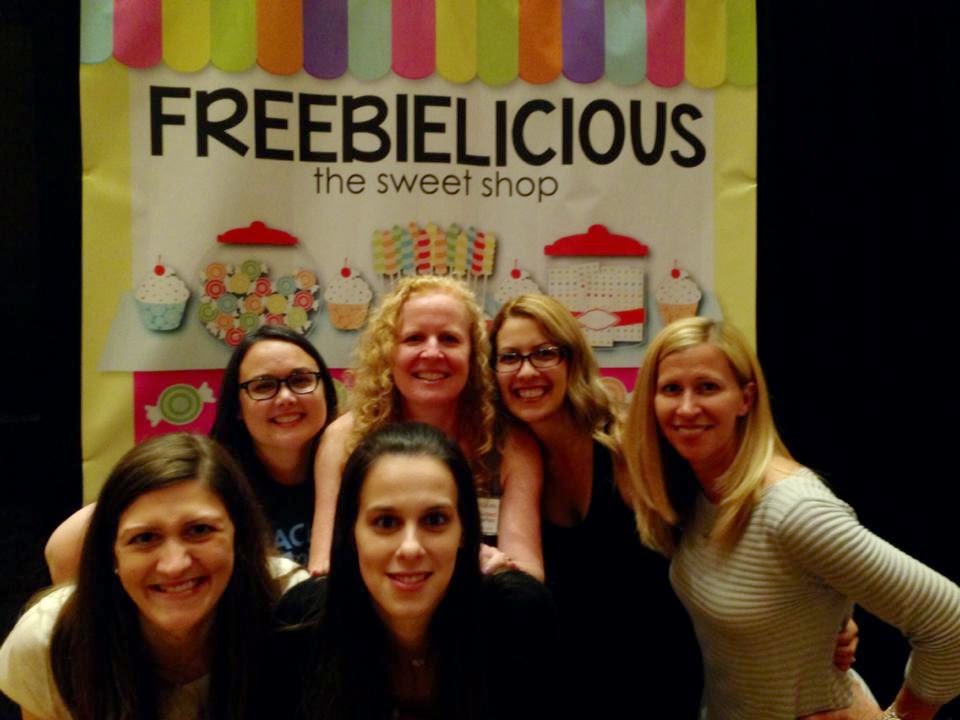 Some of the Freebielicious Girls and me
Up front:  Maria and Mary
Back:  Jennifer, Marsha, Hadar, and me
These girls are amazing.
I was so excited to meet them IN REAL LIFE.
Time flew by and then we had to get ready for THE MEET UP!
Say that with an echo:  THE MEET UP!
Last year, there were about 100 people or so.
This year, there were about 500 people or so.
You do the math.  That’s a big increase or whatever.
It was INSANE.  I seriously felt like I’d lost my mind at one point because I got stuck on one side of the room and couldn’t move to another part of the room no matter what I did.  And it was LOUD.  I don’t mind loud.  I grew up in a loud family.  I’m constantly being shushed by my family and my hubby.
Loud doesn’t bother me at all.  Well, unless I’m watching reality TV and you’re interrupting me.  Then I mind it.  Oh, I also mind it if we’re in class and we’re writing or taking a test or reading or working on math or learning new vocabulary or napping.  But that’s pretty much the only time I mind noise.
But this was different.
This was over 500 teachers talking all at the same time, as well as squeals and screeches when we met people that we had been dying to meet.  Okay, the high pitched, glass shattering shrieks might have just been me.
For example, when I met Cara Carroll from The First Grade Parade, I might have freaked out a little.  Maybe.  I don’t know.  I do know that I think I hugged her face.
Her face, people.  Not her person.  Her face.
If I ever tried to recreate how I hugged Cara Carroll’s face, it would never go down the way it actually happened in real life ever again because I don’t know how exactly it happened, I just know that her face was in my hands.
I know.  I’m shaking my head, too.
But Cara was just as sweet as you would imagine her to be and let me hug her face anyway and, if you can believe it, hugged me back.  Although, she hugged me properly.  The proper way that one hugs another person, especially if they are meeting for the first time.
I’m wondering if there is a class I can take?  Or if my hugging problems are due to my short stature?
I got to see Rachelle and Natalie from What the Teacher Wants – they were our hostesses, and this time I told Rachelle to shut up when I saw her.
Really.  I did.  It’s our thing.
I saw Charlotte (lovingly referred to as a stalker) again, as well as the teacher that I worked with IN REAL LIFE that scared the living daylights out of me last year.  However, this year, I was ready for her.  I was not surprised at all.
Can’t fool me!  Can’t hug me, either, apparently.
I met a million and one people.  And even though there were only 500 teachers there, I met a million and one.  Seriously.  There is no other way to describe what happened at the meet up.
I got a glass of wine and never drank it because I could not stop talking.
AT ALL.  I talked and talked and talked.  Granted, I wasn’t exactly mingling because I was stuck in the same place for an hour or so, but I met a TON of teachers.
I met teachers from Canada and Australia.  I also met so many bloggers that I’d been dying to meet.
There were also bloggers I didn’t get to meet, but that I knew were there, and our paths never crossed!  That is because I was stuck, I’m telling you!
A million prizes were given out and I won not one.  Not a one.  Not one.
I did not win is what I’m trying to say!
The whole meet up was supposed to last two hours, but was actually longer because there were so many people and so many prizes and we had all lost our hearing by the end so I didn’t actually hear them say it was The End.
But it was.
A huge group of us went out to eat, including some hubbies, and I had the mac and cheese again.  But it was much much much smaller than I remembered so it was a very good thing that I ordered a salad or I would have been hungry, that’s for sure.
I am thinking maybe they only saw the back of my head and assumed I was a kid and they gave me the kid size . . .
My hubby got to know Aris’s hubby, O’brien, during our dinner that night.  By the way, that’s his first name.  Is that the greatest name or what?  Not only do I have last name envy here, but it’s not a last name, it’s a FIRST NAME.
If you don’t know Aris, get to know her now.  She is a doll.  She’s one of the Cali girls!
I am still trying to go through my phone, Facebook, text messages, and other people’s blog posts to organize my pictures!  They’re in too many different places and it is overwhelming.
I know, I’m a failure.  I’d rather talk in words than in pictures.  But, if we took a picture together and I don’t have it (surely you would know if I don’t have it, right?), will you please email it to me at ateenytinyteacher@yahoo.com?  I can’t promise I will post it because first I have to see how I look.
Oh, I kid.
This post was a lot of words so I’ll stop now and we’ll do Vegas, Part 2 tomorrow.  With some pictures.  I think.  I don’t know.  It’s not tomorrow.
🙂
🙂
« Talk About It Tuesday
Vegas Part 2 »