It’s summer.
And I’m not doing a whole lot.
Which is amazing, but leaves very little for me to blog about other than I finished another book, I spent too much time on social media, I went to the pool again, my family is still here, and I’m eating watermelon and snow cones and ice cream and whatever else is suggested by me or him or her or whoever.

This morning when I was on my phone, in bed, whilst lounging and not waking up properly because, again, it’s summer, I came across Shay’s What’s Up Wednesday linky and thought I should join.  You know, because I stalk her and pretend we are friends in real life.  Sheaffer, Shay, Kerry, me – we’re practically inseparable.  Kerry has met them in real life on several two occasions at the mall.  Which means I’ve met them, too.  Twins have that power.
😉
And it gives me a purpose for blogging.  🙂  Win win! 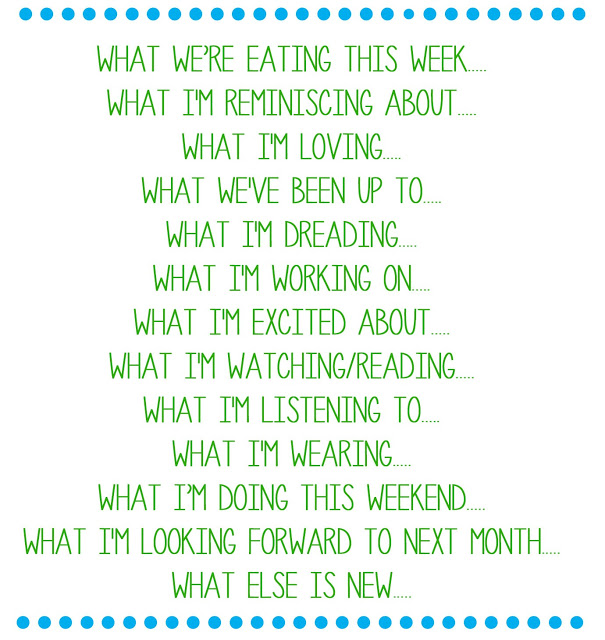 So here we go.
What We’re Eating This Week:
Well, I think I kind of already gave that away.
Ice cream, snow cones, watermelon, m&ms (my mom always has peanut and plain for when the kids visit so I find myself grabbing a handful here and there and only eating a few at a time so that I don’t feel guilty and then by the end of the day, if you count up all the m&ms I ate, I have probably eaten an entire Costco Extra Large sized bag of them), and last night we had a yummy, fresh, homemade taco salad.
Today, we are getting In and Out because Kerry is craving it.
When your twin is craving it, you have to take her there and order something, too.  It would be rude if you didn’t.
What I’m Reminiscing About:
??????
The taco salad from last night???

What I’m Loving:
Obviously, I am loving my family being here.  That’s a given.
I’m also loving the fact that Big Brother 17 premieres tonight!  Who’s watching with me?!
What We’ve Been Up To:
Um . . . not a whole lot.
Which is so so so so so nice.  Lots of family time and lots of pool time and lots of down time.
Today, we are taking the kids to my parent’s community pool and they just redid the lagoon so that should be fun and different.  I can say we went to the lagoon and sound fancy.
The word lagoon makes me think of the Blue Lagoon and the Goonies which are two entirely different movies and bizarre, too, because Goonies isn’t even about a lagoon.  Now that I’ve written the word lagoon a million times, it looks completely wrong and like a made-up word so maybe I’ll just stick with saying we went to the pool.
What I’m Dreading:
1.  Our washing machine broke so we had to buy a new one.  UGH.    It hasn’t been delivered yet.  You should see the dirty clothes hamper in my closet.  (not really)
I am dreading the amount of laundry I am going to have to do this weekend.
2.  I am dreading my family leaving.  🙁
What I’m Working On:
Back to School Reader’s Theater with Murphie and Milo!  Well, sort of.  I haven’t actually started yet.  But I have a couple of plays already written in my head.  That counts.
There’s not exactly a lot of work happening over here . . .
What I’m Excited About:
VEGAS!!!!
I can’t believe I’ll be there two weeks from today!  And that I’ll be sitting on a blogging panel two weeks from tomorrow!
WHAT?!
I can’t wait!
What I’m Watching/Reading:
1.  Well, obviously, I’m watching The Bachelorette and I’ll be watching Big Brother tonight.  But I haven’t been watching a lot of TV with the family here, unless you count kid shows on the Disney network.
2.  Here’s what I’ve read this summer so far:
The Pecan Man by Cassie Dandridge Selleck
Wreckage by Emily Bleeker
The Storied Life of AJ Fickrey by Gabrielle Zevin
We Were Liars by E. Lockhart
and I just started The Good Girl by Mary Kubica
If you’re looking for a good book, I’d start with The Storied Life of AJ Fickrey.  It’s my favorite from that list so far.
What I’m Listening To:
My youngest nephew, Caden, tends to go around singing songs.  He’s nine years old and knows a lot of words to a lot of popular songs.  Yesterday, he was playing rock band with my brother on the Xbox and he knew all of the words to Eye of the Tiger.
He also goes around and says things from commercials.
It cracks me up.
What I’m Wearing:
At this particular moment, I’m in sweats and a t-shirt.  But lately, I’ve been in shorts (I love shorts from the Loft) and cute tops.  It’s hot here!
What I’m Doing This Weekend:
We have no plans!!
I would imagine some more pool time, some more family time, and some more food consumption.
🙂
What I’m Looking Forward to Next Month:
Well, I already said I’m excited about Vegas so . . . I’m excited for a long weekend in New York!  Steve and I are meeting Kerry and my brother in law there for a long weekend.  We have already booked several tours and a show.  !!!!!!!!!!!!!!!!!!!!!!
I’ve only been to New York once.  It was Christmas.  It was cold.  It was crowded.  I can’t say that I really liked it.  I’m excited to give it another chance.  🙂
What Else is New:
Ummmmm . . . 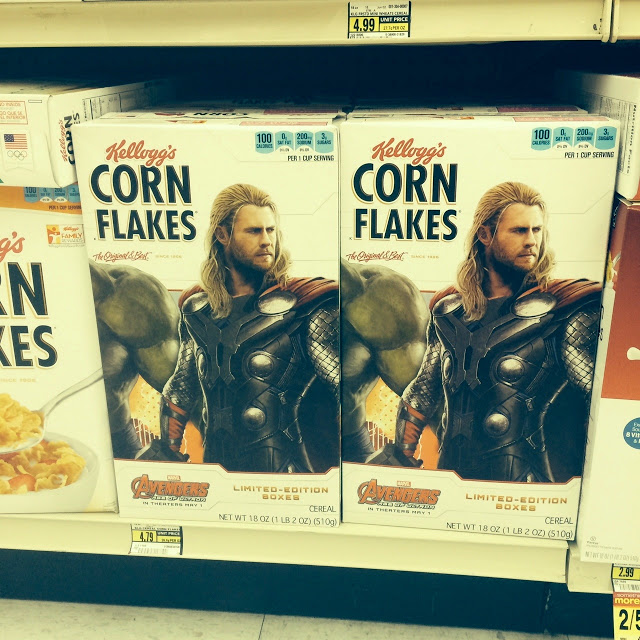 I have never been a fan of Corn Flakes and prefer Frosted Flakes instead (of course) but I think I have to eat these.
Hello, Thor.
And thank you, Kellogg’s.
🙂
Thanks, Shay, for the fun link up!
« Five for Fraturday
Five for Fraturday »